Just two weeks ago, Alabama Shakes took home their first set of Grammys. It was a big night for the band, led by one of the best performances of the show, a scorching rendition of "Don't Wanna Fight" guided by lead singer and guitarist Brittany Howard's inimitable vocals. That same song earned them a trophy for best rock performance, which they accepted in front of TV audience of millions. They'd go home with two more awards for best rock song and best alternative music album, and their second studio album Sound and Color was also nominated for album of the year. Not bad for a band that got its start in a high school psychology class.

The Verge has partnered up with the Panorama music, art, and technology festival taking place in New York City this July. We'll be talking to the artists playing the festival and shaping the future of music in the months and weeks leading up to the show.

"It was important for us to make sure we really nailed it," Howard told The Verge of their pre-Grammys preparation. The potential of the show as a star-making moment was not lost on them: "There is so much history at the Grammys, [with] all of the incredible artists that have played at the show."

They indeed nailed it. That their one song could stand up next to the outsized performances of Kendrick Lamar and Lady Gaga might have taken new listeners by surprise, but it's a testament to the power of pure musicianship, even in today's crowded pop landscape. Alabama Shakes, still enjoying their ascendance into the mainstream, is a study in American music's past and present meeting to grasp at the future. Sound and Color exists in a place beyond the rock and soul box the average listener might confine them to. The Shakes blend jazz with garage punk, old-fashioned rock 'n' roll and neo-soul. It's a carefully simmered stew that makes them hard to define, classic and unpredictable all at once.

That comes through in Howard's lyrics and the band's aesthetic. Just consider Sound and Color's title track: In an interview with NPR, Howard explained that she wanted to write a song about an astronaut who, having been sent off into space to find a new Earth, wakes up only to find "everything's wrong. Everything's chaotic. Everything's different." Five hundred years have passed, and he's all alone in space. The sparse, haunting melody underscores the sorrow in the astronaut's discovery, all before he accepts his fate while watching the Sun rise over a new planet. It's roots rock with a vibraphone and violins, with a story that seems plucked from mid-20th century speculative fiction. Paired with a gorgeous video by director James Frost, the astronaut's tragedy feels like something out of 2001: A Space Odyssey. 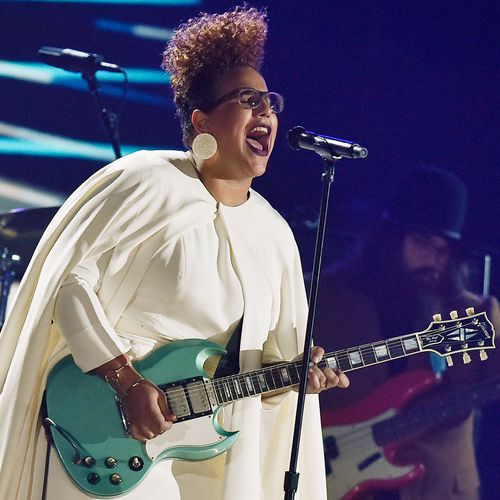 
"I really don't want to rule out any style at this point."

"I think our visual work mirrors our approach on recording, in that we like to experiment," Howard told me. "It was fun to make a sort of sci-fi, futuristic video for Sound and Color. But then, it was also really fun to make the live videos at Capitol Studios with [photographer] Danny Clinch, where we just set up as a band and they filmed us playing four songs with one camera, one take."

The Shakes originated as a touring band, going on the road for months of small-town gigs and playing Led Zeppelin and AC / DC covers in dive bars. They quickly graduated to the festival circuit, and if you found yourself at Bonnaroo, Sasquatch, or South by Southwest in the last several years, there's a good chance you caught them playing in support of their debut album, 2012's Boys and Girls. That record was much more classifiable (one might call it indie retro-rock,) and smaller in scope, but it still planted the seeds for their breakout. "I think because we were limited on time and resources on the first album, the approach was a bit more narrow," Howard says. "On Sound and Color, we wanted an album that really showed our diversity and was more of a representation of us as a band."

Howard and her band may be touring pros, but this year they'll be playing for a bigger fan base than ever, and they don't see themselves slowing down musically. "We plan to keep evolving," Howard told me. Their summer schedule is packed, with stops at Lollapalooza, Hangout Festival, and NYC's Panorama along the way. As for what they might throw into their eclectic mix next? Howard's guess is as good as yours: "I really don't want to rule out any style at this point."