A PlayStation VR demo made me cry from laughing

A PlayStation VR demo made me cry from laughing

Zelda and Mario fill my childhood notebooks, and sure, I miss those halcyon days of Sonic the Hedgehog. But truthfully, I reserve my purest nostalgia for the smaller, forgotten, barely playable games of the 1990s that will never be given their proper spot in books or museums. I cherish memories of the shareware days of Windows 3.1, when rogue artists and programmers created grungy video games that were short, unpredictable, and occasionally infringed on the copyrights of mega-famous intellectual properties. I never expected to see a modern video game from a financially flush publisher capture that era’s specific mix of strangeness, looseness, and puckishness. Then I tried Sony’s Social VR demo. Y'all, it's weird AF.

The top-level pitch is shrewdly commercial: you and three friends connect online through your PlayStation VR headsets to chat and explore a cartoon island. Surely at some point, someone at Sony imagined this demo could flower into a Nintendo-esque made-for-everybody social game. Social VR instead wound up being a parody of all that. 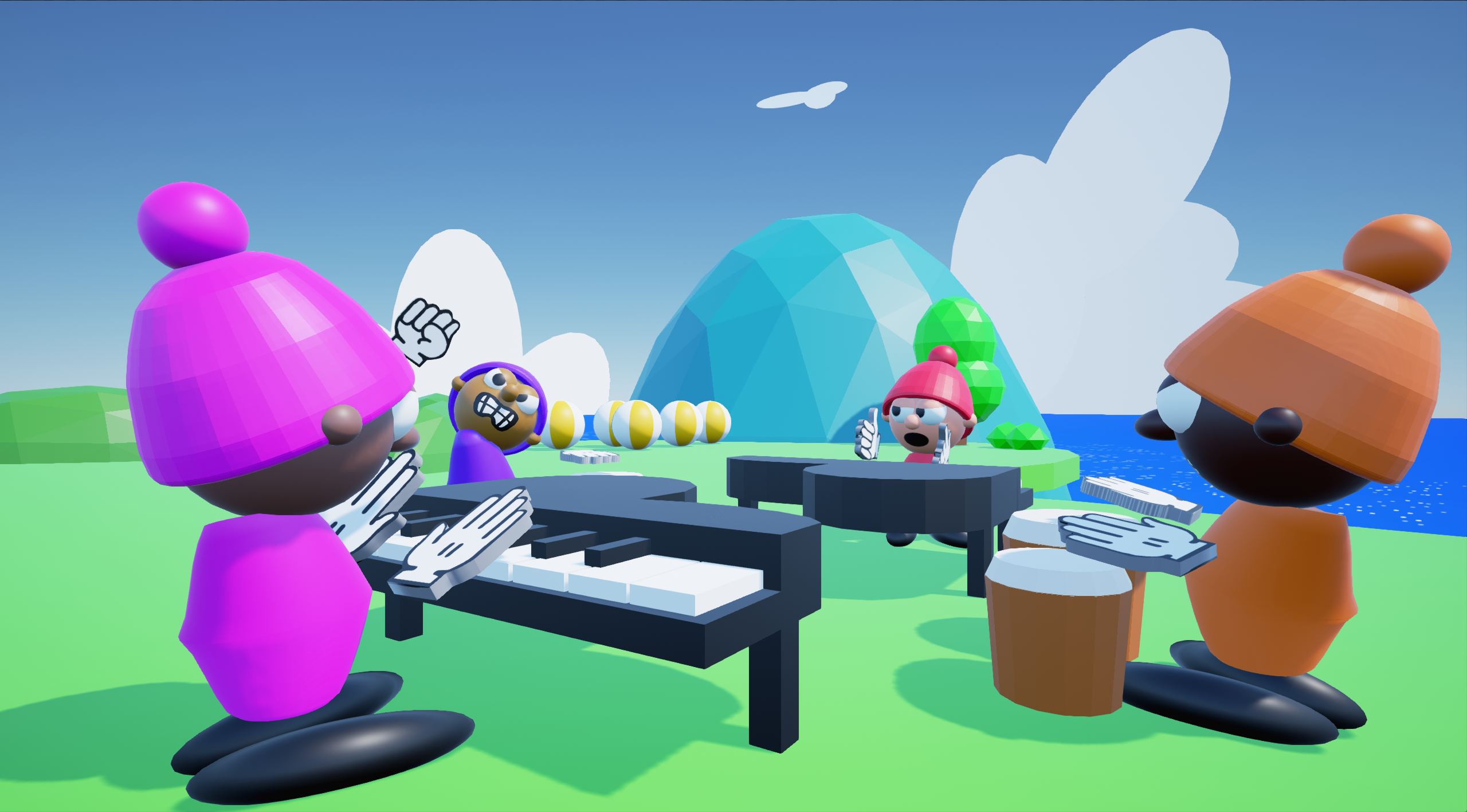 Yes, you and your friends are cartoons, but you're composed with the artistic depth of the early South Park episodes. You express yourself with giant foam hands. You run by pointing in the direction you’d like to move, turning every step into a Fosse-like dance. To turn, you blink left or right 10-degrees of rotation at a time. This sounds terrible, I know. It is not. It is perfect. If Sony changes this to something polished, my heart will dissolve into a pile of dust.

The Social VR demo is a grab bag of VR lessons, teaching the player to tap, twist, grab, wave, and do a number of actions in the virtual space — much like Minesweeper and SkiFree acclimated Windows users to their first desktop computers.

Virtual reality games, particularly those at the PlayStation VR event, aspire for the same level of polish as traditional games. Sometimes that means porting a game that already works on a monitor, like Rez or Thumper, adding some intensity and depth to something that feels familiar to anyone who’s played a game with a controller and a screen. Other experimental games pluck out expected game mechanics that reveal VR’s flaws, like the handful of shooters and fighting games that take control of where and when the player moves, like an amusement park ride with weapons. The Social VR demo looks in the opposite direction of these trends, and sprints into the wilderness.

Like the shareware games of the 1990s, the Social VR demo is experimenting with what this new experience is, and what can be done with it, and in doing so it’s sort of stumbling over itself and laughing at the mistakes. A tour of the island felt unpredictable. When I hit a ball with a toy block, and the ball flow through the ground like a graboid, I giggled. I could walk through my peers’ avatars, seeing inside their hollow bodies. When I grabbed a bouncing ball, I shot thousands of feet into the air, so far away I could no longer hear my new online buddies. As I fell back to earth, I could hear them again, but when I hit the ground, I bounced, going back another couple hundred feet into the sky. Are these bugs? Almost certainly! But they’re also a giddy byproduct of experimentation, like when Navy engineer Richard James was in the lab and accidentally made the Slinky.

While I was falling back to earth, I couldn’t stop laughing. Tears were building in my eyes, and I tried to wipe them away, smacking my hand against the headset, causing me to laugh more. The tech demo was created by a team from Sony Computer Entertainment Europe. I hope Sony gives them the greenlight to make something bigger and stranger, and that the team and Sony aren’t afraid to release a world of rough edges. Years ago, Sony released the over-polished Home, a sterile lifelike online social space. Social VR is the opposite of Home. It is, intentionally or not, fan service for a niche subset of 1990s alt culture when designer could fret about fun over flawlessness.