Are we together or are we alone?

This is only sort of an Avegant Glyph review

Share All sharing options for: Are we together or are we alone?

What can I tell you about the 20 hours I spent running through primeval forests, chasing down a saber-toothed tiger?

I can tell you that it was different for me than it was for the vast majority of people who have played Far Cry Primal. Because for me, it felt much more real. I was sitting in the same chair I'm sitting in now, but I wasn't really there at all. I was hunting that giant cat — or better put, it was hunting me. The sound of what seemed like my own breath rasped in my ears, and as the extinct beast loomed large in my face, it was happening literally on my face.

I was playing, you see, with a gadget called the Avegant Glyph. It's a head-mounted personal video player that projects moving images directly on to your eyes. It works with anything that has an HDMI output — like, say, my Xbox One.

It is not a virtual reality headset, it's something else. But like VR, it's part of a new class of headsets that offer immersion and cut off (to varying degrees) your senses from the outside. Of all of these headsets, the Glyph is the thing that has allowed me to go inside a different world for the longest, even though you can still look outside and see what's going on around you.

The Glyph looks like the insane image you see above — a ginormous pair of vaguely Beats-esque headphones that you wear with the band over your eyes. It looks like a cast-off prop from the 1995 movie Johnny Mnemonic. It costs an exorbitant $699.

Headsets create an out-of-body experience without leaving your body

But get past all that and you end up with a “screen” that looks about the same size as a 50-inch TV from across the room. Except it’s right there in front of your eyes. Playing that game was an out-of-body experience without leaving my body. I know that this is the kind of cliche talk you hear with virtual reality all the time. But it’s different when instead of just having short “VR experiences,” you spend five straight hours in it. I was here, in this chair, but the important parts of me were there and I was then — in the Stone Age.

Life is going to get super weird when everybody starts strapping screens to their face for extended periods of time.

The Avegant Glyph does not make a good first impression.

It’s big and heavy and above all gadgety in a way few things are anymore. There are switches and dials and if you want to use it with a phone there are adapters you’ll have to buy and not lose.

When you first put the Glyph on, it’s uncomfortable and you can’t really see anything. You have to learn how to adjust the seven or eight little gee-gaws to dial in the image. There are two little eyepieces that pop out (keep them perfectly clean or else everything looks terrible). You can move them right and left to line up with your eyes. You rotate them to get everything in focus (fortunately it works even if you normally wear glasses).

You adjust the headband (eyeband?) so that the whole thing is positioned as closely to your eyeballs as possible. You choose from one of four custom nose bridges and then adjust that up or down until the corners of the screen are visible — and even then you won’t really get them totally in focus. And if the whole thing feels too heavy (it will), you attach an optional headband to help take the weight off your nose.

All of that fiddling and adjusting means that you need to spend a good ten minutes just to get the Glyph working with whatever you’ve plugged into it. And even then, you’ll end up constantly messing around to try to get the picture a little bit better.

You can plug in anything that kicks out an HDMI signal — your console, your computer, or your phone if you have the right adapter. Using it with a computer seems like a grand idea until you realize that both Macs and PCs put vital things in the corners of their displays, and the Glyph makes it really hard to see all four corners at once.

You can also do some basic VR-type stuff with head-tracking and the Jaunt VR player (though I never got it to work). But again, this is not a VR headset. You have this screen in front of you, but you can also look out to the outside world. You can look down to pick up a drink or look up to see people staring at the ridiculous thing attached to your cranium.

Although I used it primarily with my Xbox, the perfect use case for the Glyph seems like a plane ride. You can set up a movie on your iPhone and be almost completely disconnected from your fellow travelers — but still aware enough of your surroundings to catch the attendant when he rolls by with the drink cart.

After just a couple hours, though, you’ll probably find that your nose hurts and your eyes are a little tired. The screen on the Glyph has three brightness settings and all of them are searingly intense. When you take the Glyph off, you’ll have a ghostly square hovering in your field of vision, like you were staring at a pixelated sun.

You can also use the Glyph as a pair of regular headphones — but don’t. It looks ridiculous and feels worse.

I’m not really selling the experience well here, am I? It’s not great, if I’m honest. Until it is.

That is Tensay, the Shaman of the Wenja tribe in Far Cry Primal. Here, he is exhorting me to drink a mix of blood and mysterious powders and — look closely — a couple eyeballs. The developers of Far Cry were surely anticipating that we would experience his mugging and invasion of personal space on a television. So they exaggerated his closeness, his movements, and the creepiness of that blood-filled skull.

Except I experienced it differently. Far Cry is one of those first-person games where you embody a body-less character. It’s your hands that reach out to skin a badger or draw a bow. And when you play it on the Glyph, they’re about in the right place and the right size to be your actual hands. And the people and animals that inhabit the world seem closer to life-sized, too. The Glyph’s large earcups block out the world and its surprisingly good speakers let me hear a deep boom of chanting alongside the bright crackle of the fire.

When my character took the elixir so he could go on a spirit journey, I saw the skull placed literally where my mouth was. It was intense. I probably even tilted my head back to drink it down.

I say I “probably” tilted my head because I don’t really know. After a few hours in the Glyph, you enter a weird zone. All of your attention has been in a game world for so long, your presence in the real world is diminished.

This kind of immersion isn’t new — I’d say it’s just an evolution of the zoning-out we’ve all done with other forms of media. But what is new is that your attention is captured so much more effectively when the screen is right there and you can’t hear anything from the outside world.

With a headset, you’re only half in the world

We’ve all read a lot about the experience of immersive VR (and again, the Glyph isn’t VR, but stay with me), but there’s another really important experience that we haven’t paid enough attention to. These headsets change the way you exist in the real world. they change the experience of being in the physical presence of somebody who’s not present at all. Somebody wearing one of these headsets is like an inverse ghost — the body is there, but the spirit has passed beyond.

That uncanny tension is why taking selfies with people who are wearing a headset is so hilarious. You’re there, they’re only half-there. They’re somewhere you’re not, and maybe you’ve got some kind of reality FOMO that needs to be resolved.

But it’s a short hop from hilarious to ominous. And I can see just down the road that there’s going to be a lot of hand wringing about these screens. Every form of escapism we create makes people worry — and VR and personal video screens like the Glyph offer incredibly potent escapism.

In the 1980s, the fantasy world of Dungeons & Dragons sent the Moral Majority into a panic. The ‘90s saw congressional hearings about video games as a violence-inducing force. And in the last decade, the combination of broadband internet and ubiquitous smartphones had parents everywhere worried for the attention span of their children — and themselves.

When more and more people get headsets like the Glyph and start to have the experience I had with Tenjay, we’re going it see a similar thing happen again. And even if you’re not sympathetic to the fear of escapism that comes with every new form of media since the novel, you still can’t help but feel a twinge of worry. Add in the possibility that some of these headsets warn that they may not be safe for children and you can see how the next cycle of fear for our rotting brains is just around the corner.

The dissonance between the inside and outside experiences is instantly obvious, and will cause a moral panic

It’s coming because the dissonance between the inside and outside experiences is instantly obvious. There is a vast gulf between the weaponized entertainment you get inside these headsets and the deadened, inhuman body you see from from the outside. When I was wearing the Glyph, my wife had to grab my leg to get me out of my primitive reverie.

Think of all that, then imagine the sanctimony that will ensue when it becomes commonplace for people to just be Alone Together in a room wearing headsets. What will people say when the below image goes from a joke about the future to the reality of the present?

Someday, we’ll look back and think such concerns are quaint. Just like we do with the panic over the effects of the novel in the 18th century. How silly, we’ll think as we jack the Matrix directly into our cerebellums, that people thought anything that used low-bandwidth input like our dull eyes and fallible ears could cause such worry.

I don’t think these headsets are going to end civilization. But I don’t know what the rules are for being in the same space as somebody who’s only half in that space. And nobody else does either. I’m old enough to be discomfited by it, but I expect we’ll figure it out.

Oh yeah, the Avegant Glyph. It’s neat, but it’s too way expensive and too heavy for me to recommend to anybody. If the next version is cheaper and lighter, I’ll probably want to buy it. And by then, maybe these headsets will be common enough that people won’t think I’m a weirdo when I wear it on the airplane.

Our review of Avegant Glyph 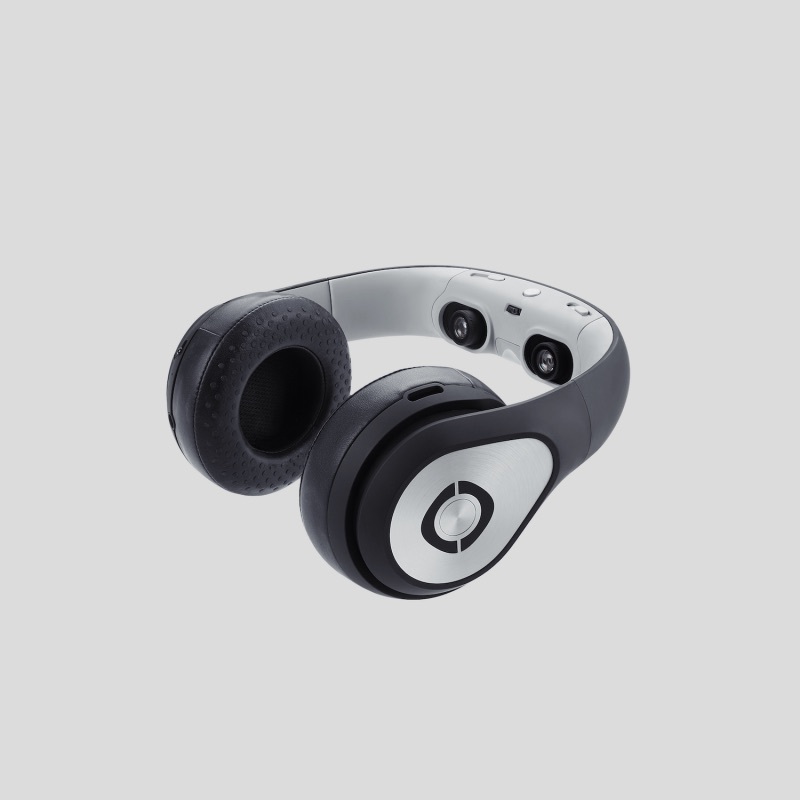