Everything you wanted to know about Tumblr's feminist party at SXSW

Everything you wanted to know about Tumblr's feminist party at SXSW

But were too problematic to ask

By Emily Yoshida and Jamieson Cox

It was easy to miss, but there was a bit of a tempest in the SXSW Music teapot a few weeks back. When Tumblr announced its 79 Cents feminist-themed party during the festival, its lineup puzzlingly included Crystal Castles, a band with a not-so-feminist-friendly history. Their inclusion wasn't the offensive thing so much as the larger, ubiquitous trend of brands jumping onto the #feminist bandwagon as if it was dabbing or Damn Daniel or any other monetizable meme, without doing any research or truly investing in inclusivity or reproductive rights or anything specific at all. Tumblr eventually removed Crystal Castles from the lineup, but the party went on as planned, complete with an appearance by Texas senator Wendy Davis, who famously filibustered against a bill that would reduce abortion rights in the state. The Verge's Jamieson Cox was there. The Verge's Emily Yoshida was not, but she had a lot of questions.

Jamieson, it felt only right that after breaking the weird ignorance around Tumblr's event, you followed up and went to the actual thing. You are more diligent than me, but I still want to live the branded dream vicariously through you. So what was the vibe? How were those feminist art installations? Were there any "free Ethan Kath" protestors gathered outside?

I'm honored that you'd like to tap into my experience at one of SXSW's many brand extravaganzas, but I'm sad to report that the vibe wasn't much different than the one you'd feel at any other upper-echelon company affair this week. There was a cardboard cutout of Beyoncé at the front entrance — does that count as a feminist art installation? ("Power's not given to you," she whispered. "You have to take it." We took a picture together, of course.) 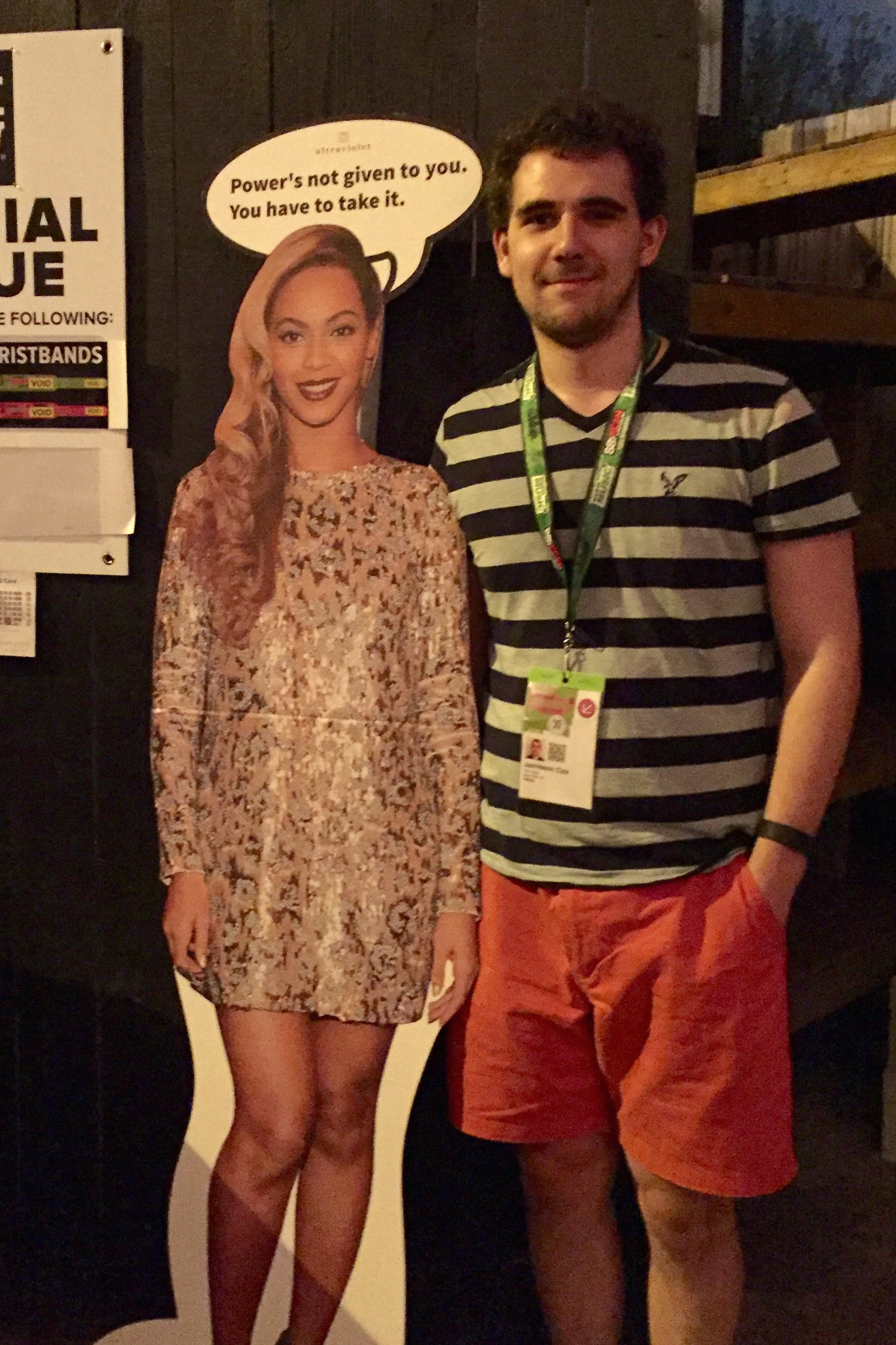 About half of the space was covered in a custom wallpaper decorated with the faces of the artists performing and little cartoon pizzas, but I don't know if that meets the "art installation" standard. Little Tumblr pins and cue cards detailing the event's message were conspicuously placed on tables and benches around the bar, but it looked like they were being mostly ignored. And Austin's hordes of OG Crystal Castles stans must've been warned to stay away, because I didn't hear a single person complain about Kath's banishment from the lineup. It was a drama-free evening on that front, but it was also nearly indistinguishable from any other party this week save the five minutes Wendy Davis spent speaking.

I want to get to Davis in a second, but more importantly, pizza? Was it like, a political pizza? 79 percent of a full pizza?

Tumblr's attention to detail was lacking in that regard. They were standard-issue, droopy slices, and they were complemented by the occasional standard-issue hard-shell taco. The toppings and fillings were difficult to discern.

That's about right. It was an effective distillation of both Tumblr's platform-level aesthetic and its penchant for earnest activism, but that doesn't mean much for its effectiveness as a starting point for continued advocacy. I'm confident every person in attendance was on board with bridging the gender pay gap and fighting for women's rights well before they heard the night's first song or consumed their first Lone Star. It was self-congratulatory in that sense: a bunch of people committed to the same ideas, loudly reaffirming their commitment to said ideas while benefiting from the hospitality of a company interested in doing the same.

So how did Wendy Davis slot into the whole thing? Let's be clear, this is a curated event put together by someone at Tumblr who had fifteen minutes to name some stuff that had to do with women ("Beyoncé! Broad City! Abortion! Pizza!" — fun game, kind of like Outburst) and then figure out how to turn it into something to bolster their brand's general relevancy. So whose brand won out in this transaction: Wendy Davis or Tumblr?

If you blinked — or arrived after 10:00PM, the time when many SXSW are just waking from their restorative disco naps — you would've missed her. She hopped on stage between goofy punks Tacocat and the brassy British rapper Little Simz, spoke for less than five minutes, and spent a while taking photos with fans and admirers before leaving. Davis invoked the spirit of early feminists who were willing to suffer and fight for their cause, and she implored the crowd to vote every chance they get to affect meaningful change. Had she stopped there, I would've awarded her the victory with a clear decision. It was succinct and impactful, and it reminded attendees that showing your support for gender equality by attending a Tumblr-sponsored SXSW party is a little like dyeing your Facebook profile picture rainbow and calling yourself a LGBT activist. It's a nice gesture, but it's ineffectual.

Of course, she went on to ask everyone to visit the website promoting her brand new Deeds Not Words initiative, a bit of self-promotion that landed with a resounding thud. (Has anyone ever woken up from a night spent partying and said, "Oh yeah, I need to visit that website?") I can't fault her for taking the opportunity, but it was a reminder of the web o transactions underpinning the event. "We'll trade our access to a horde of woke young people for your hard-earned reputability as a contemporary feminist icon." Can I just say that nobody wins?

People were hyped, but that didn't have anything to do with Tumblr

I didn't want to push my luck after getting a minute with cardboard Beyoncé. She's elusive, you know!

I have a theory that brand-activated feminism is going to jump the shark after this year's SXSW — it's out in full force this year, perhaps as an antidote to all the ugliness about the gaming and harassment panels, but I personally don't expect entities like Tumblr and YouTube to solve the wage gap or increase representation in tech or film or the music industry (besides on the stage, which as we all know, is a woman's place.) After attending 79 Cents, what's your assessment on the state of brand-friendly feminism?

This is probably naïve, but I'm hoping the ineffectiveness of this surface-level alignment with noble causes dawns on the world's collected brands soon. People were hyped last night, but that didn't have anything to do with Tumblr's commitment to the cause or their relationship with Davis. They were hyped because the event's theme justified the assembly of a musically diverse, talented lineup: the aforementioned Tacocat and Little Simz, Empress Of's serrated electro-pop, Ex Hex's rumbling riffage. The music is what mattered, and songs like "Hey Girl" and "Kitty Kat" do more to incite real change and moments of clarity for listeners than thousands of pins and card-printed screeds. If brands are really dead-set on looking enlightened and culturally savvy, it's not that hard: give artists the space to spread your desired message more effectively than you ever could. (And do a little bit of research before confirming your lineup.)

More from this stream SXSW Music 2016: The artists, speakers and breakout performances