When you think about it, Pokemon is just a series of fighting games without the violence. At their core, these games are about two creatures, each with an array of special moves, hitting each other until one of them runs out of health. Pokemon makes this process somewhat abstract, with its turn-based structure and simple animations. But Pokken Tournament — a new Wii U game created by some of the key minds behind the Tekken and Soulcalibur series — makes those battles much more visceral. You can actually see and experience what happens when Charizard slugs it out with Pikachu in a tiny ring. And unlike most fighting games, which feature complex strategies and complicated controls, Pokken is simple enough that just about anyone can have some fun with it.

Despite its streamlined nature, Pokken doesn’t seem so straightforward at first. There’s a lot to keep track of, starting with the opening tutorial where you’re bombarded with all kinds of weird phrases and rules. In addition to your health bar, you’ll also need to watch a gauge that powers potent special attacks, and another that lets you summon helper pokemon to aid you in battle. The game also has a strange, shifting camera: at times it’s a 3D, free-roaming arena, but throughout the battle things will switch to a more traditional Street Fighter-style 2D camera angle. On top of all of that, there are multiple categories of fighters, from the speedy luchador version of Pikachu, to the huge, muscular Machamp. Each has its own unique skills and abilities, and even the size of their health bar differs.

It’s a lot to take in. But once you start playing, it turns out you don’t really need to understand all of those aspects to enjoy the game. The key to Pokken’s accessibility is its control scheme. Instead of forcing you to memorize long button sequences to do special attacks and other moves, Pokken goes in an entirely different direction. Every single move in the game can be performed with only two buttons, usually a combination of an attack and a directional input. If you want to do a screen-filling special attack, you just hit the shoulder buttons together at just the right time. After a few minutes of experimenting you can get a firm grasp on every available action. 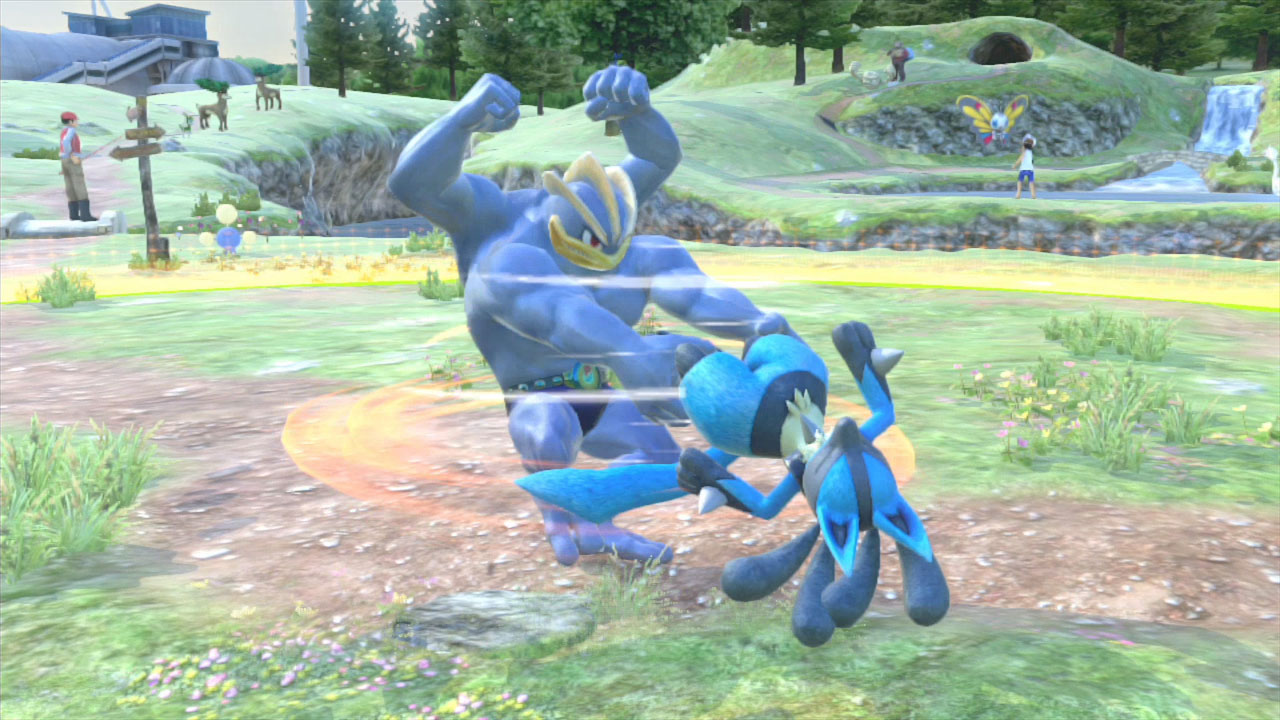 The effect is incredibly refreshing: diving into a new Street Fighter means spending hours, days, or even weeks training and memorizing how to perform attacks, but in Pokken you can jump right in. It takes no time at all to learn how to make Pikachu perform a thunderbolt, or to have Lucario perform a rush attack. You have access to a character’s entire arsenal of attacks from the very outset. On the surface, that makes Pokken sound like a game that dumbs down the experience in an attempt to lower the barrier to entry, but it still has a surprising amount of depth.

The key to Pokken’s accessibility is its control scheme

Like the flagship Pokemon series, Pokken employs a rock-paper-scissors-like system where certain moves are strong or weak depending on how your opponent counters. Reading the battle becomes an important part of experience, as you need to understand what your opponent is doing in order to counter in the most effective way. There are additional layers of strategy, like choosing support pokemon that can help you by doing things like attacking your foe or granting temporary bonuses like increased speed or strength. You can ignore these aspects initially, but as you play more and face off against tougher competition, they become increasingly important. It’s not as deep as, say, Tekken, but it’s still a game where skilled players who can read the action have an advantage.

That said, the game is far too easy in the early stages of the single-player mode. I’m not especially good at fighting games, yet I went undefeated for more than 40 matches during my initial playthrough. After a while it got boring. And this is especially disappointing because Pokken has a really cool tournament structure, one that mirrors the way things work in the main Pokemon games. You work your way up through a league, defeating opponents to increase your rank, before ultimately taking on a champion. Beat them and you move up to a higher, more challenging league, and along the way you can level up your pokemon’s stats to make them stronger. It works really well — and there’s even a bit of story to go along with it — but it takes a while before you’ll come across anything that remotely resembles a challenge. 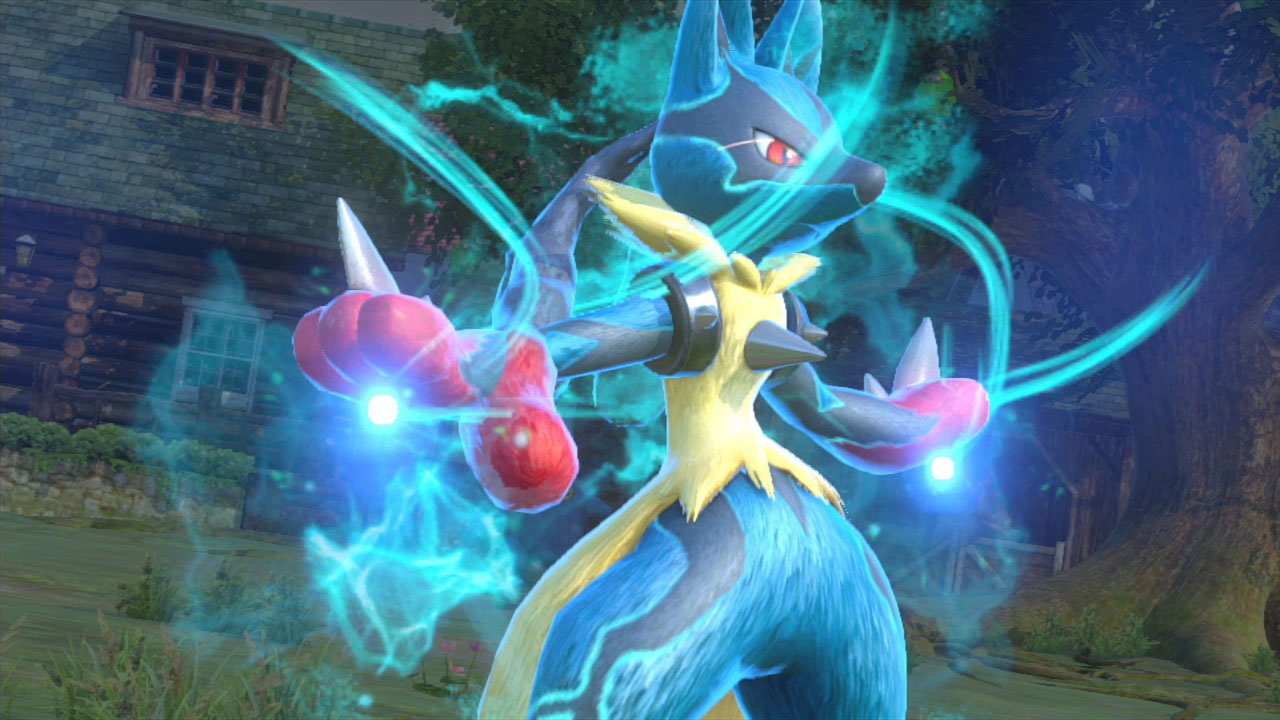 Of course, single-player is only one small part of a fighting game. The real fun comes from playing against others, and Pokken doesn’t disappoint in that regard. In fact, its more approachable take on the fighting genre makes it perfect for playing with friends. Much like Smash Bros., pretty much anyone can pick up a controller and enjoy themselves, with little to no practice. (And unlike the frantic Smash Bros., it’s also possible for just about anyone to actually understand what’s happening on screen in Pokken Tournament.) The fact that it’s a Pokemon game only makes is more welcoming, with plenty of fan service for those who played the older games or watched the cartoon. The roster of fighters is a bit eclectic, ranging from iconic characters like Pikachu to more obscure pokemon like Blaziken or Chandelure. The stages in particular are great; my favorite takes place during a Magikarp festival, with flapping fish flying across the screen while a proud, golden statue dedicated to the most useless of all pokemon stands tall in the background.

Whether or not Pokken Tournament ultimately has staying power of games like Street Fighter or Tekken isn’t really for me to say; time will tell whether an engaged community forms around it (though it’s already been selected as a featured game at the prestigious Evo 2016 Championship Series). But, just as Splatoon did for shooters, Pokken Tournament gives me the satisfaction of a good fighting game without the intimidation and time commitment. More importantly, it lets me finally see what it really looks like when Charizard punches Gengar.

Pokken Tournament is available now on the Wii U.

Read next: How the minds behind Tekken and Soulcalibur transformed Pokemon into a fighting game