I hate wired headphones. It's my own fault, I admit, I just really don't mix well with wires. I crumple them until they tangle and (inevitably) fray, and I remain blind to them until the moment they trip me or yank my devices off the table.

I know I'm not alone — other people hate wired headphones enough to have sparked a boom in wireless headphone sales from companies like Beats and Bose. But wireless earbuds are a different story. We haven’t seen many of those yet because it's just hard to pack the proper wireless radios into such a tiny form factor.

Bragi is just one company trying to solve this problem, but it's probably the most well known. Its earbuds, known as the Dash, raised over $3 million on Kickstarter in 2014, and have become the reference point for just about every other company currently trying to make wireless earbuds a thing.

But Bragi wants the Dash to be much more than just wireless earbuds. The Dash is supposed track your fitness and tell you your heart rate. The Dash is supposed to be a personal assistant, your very own "Samantha" from Her. The Dash will let you use gestures to maneuver through a world of augmented reality planted in your ears. Bragi treats the Dash the same way Apple treated the Apple Watch — as an unnecessarily and overly ambitious device being released during the inception of a new product category.

In some respects, the Dash feels like the coolest device I've ever used, like someone went forward a few years into the future and brought back these tiny earbuds. Despite some obvious drawbacks, wireless earbuds have a certain magic about them, and I'm still madly in love with the idea. But I spent the majority of my time with the Dash frustrated because of how poorly it delivers on the promises that got the project funded in the first place. 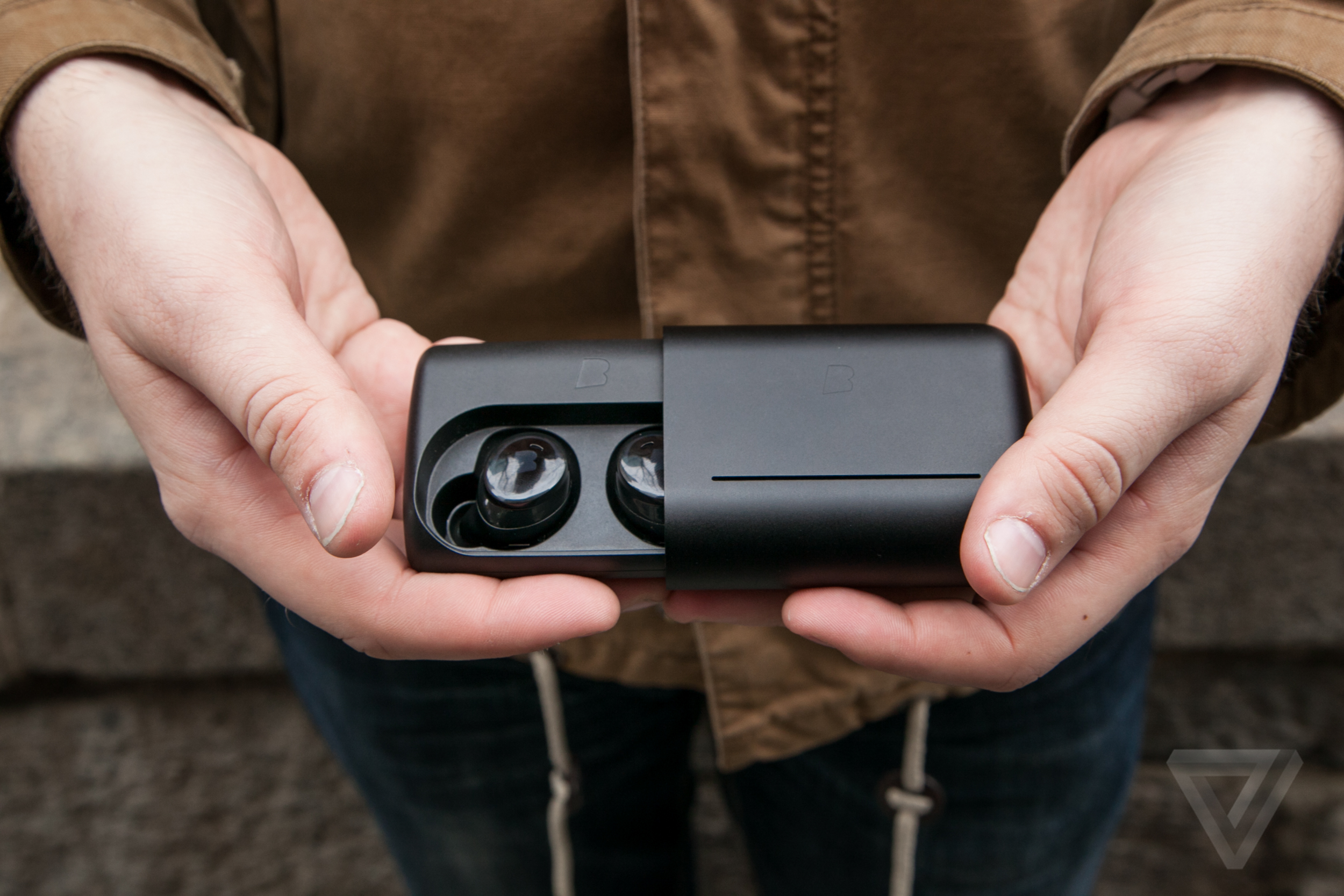 The only way to be happy with the Dash right now is to forget about all the secondary features and just use them as wireless earbuds. I consistently picked the Dash over my normal headphones over the course of two weeks for two reasons: the hardware is remarkably refined, and removing wires from the equation feels like a major step forward.

The outside half of each earbud is made from a slick, smooth plastic, while the inside consists of a grippier rubber. The rubber helps keep the earbuds in your ear, and it works — I never had one fall out during normal use, or even when I ran with them. The soft plastic makes for easy swiping and tapping (the bottom half of the outside of each earbud is a touchpad), and the two sides meet seamlessly in the middle.

Someday we'll probably have wireless earbuds that are so inconspicuous they'll make the Dash look laughably big and obtrusive, sort of how we snicker when we look back at old cell phones. For now, though, the Dash’s design is ahead of its time.

The Dash's design feels ahead of its time 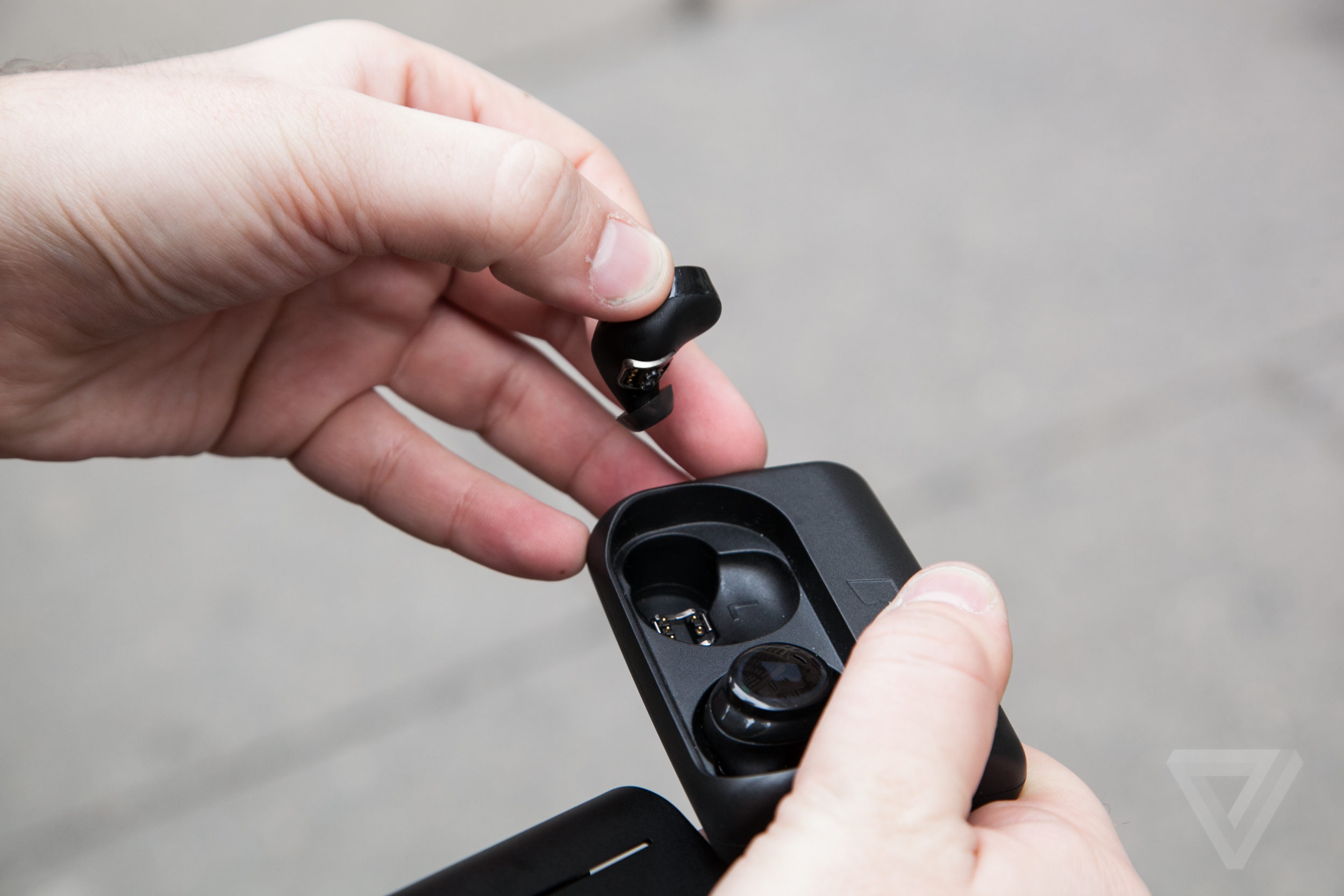 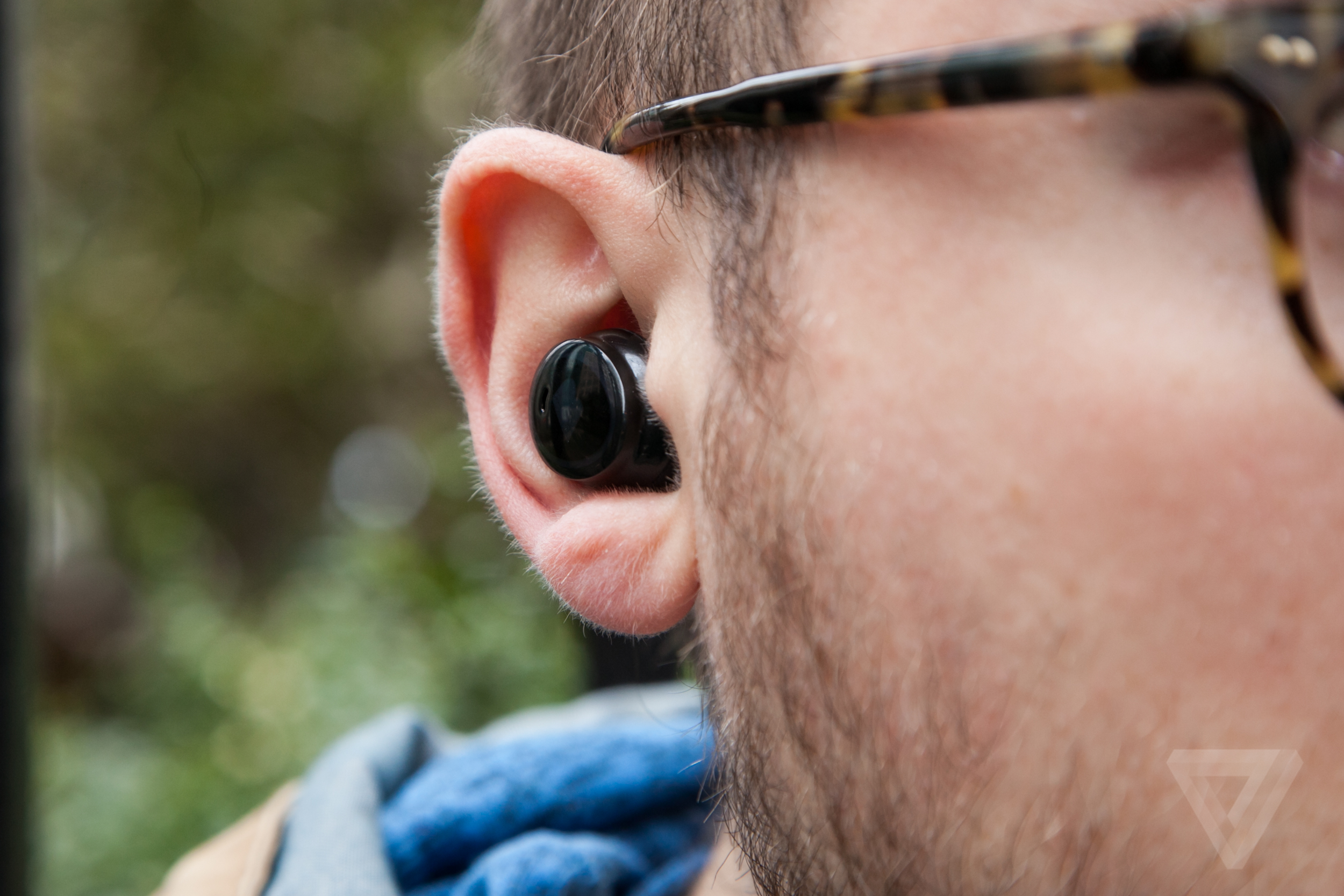 The problem with wireless earbuds is that they’re tiny and could be easy to lose. No one wants to spend a few hundred dollars on a pair and wind up losing one (or both), and so carrying cases are going to be an important part of the equation. Bragi’s knack for hardware shows up again here, too — magnets in the case lock the earbuds down, and they’re good enough that you can even drop them in from a small distance. There's a metal cover that slides over the case for when you want to throw the Dash in your pocket or your bag, and you can see if the earbuds are fully charged.

Aside from the hardware, the way you interact with the Dash is probably the most polished part of the product. The taps and swipes were tricky to get right at first, but I grew accustomed quickly and used them every day to control the music on my phone. Little chimes let you know your taps have registered. It’s a bit like learning how to double-click a mouse for the first time — it all comes naturally once you figure out the speed. The audio coming through the Dash even pauses when you take the earbuds out, and then picks right back up where you left off when you put them back in.

All these interactions — the subtle audio cues, the controls, the way the headphones know when they’re in your ears and how they work with the case — are Bragi at its best. But Bragi is at its worst when it over-promises (like when it originally planned to ship in October of 2014), and unfortunately too much of this side of the company can be found in the Dash that’s currently being sent out to Kickstarter backers.

Bragi delayed production (and subsequently, the release) of the Dash for months in order to retrofit the earbuds with something called Near Field Magnetic Induction (NFMI). The technology was borrowed from the hearing aid industry, and the company promised it would allow for better audio quality and a more reliable connection between the earbuds. One issue with wireless earbuds is they don’t just need to sync to the phone, they need to sync to each other, and NFMI neatly solves this.

The Bluetooth connection to your phone is still a major problem

The inclusion of NFMI might get the earbuds talking to each other, but the Dash still uses Bluetooth to connect to your phone, and it's a big problem. Any time my phone was more than a few feet from my ears, or buried in my pants pockets, I'd experience hiccups in the audio. Bluetooth is like any wireless radio: it needs big antennas, a good radio, and enough power to make it all work. All three are difficult to pull off in something as small as a wireless earbud, and this version of the Dash doesn’t quite get there. 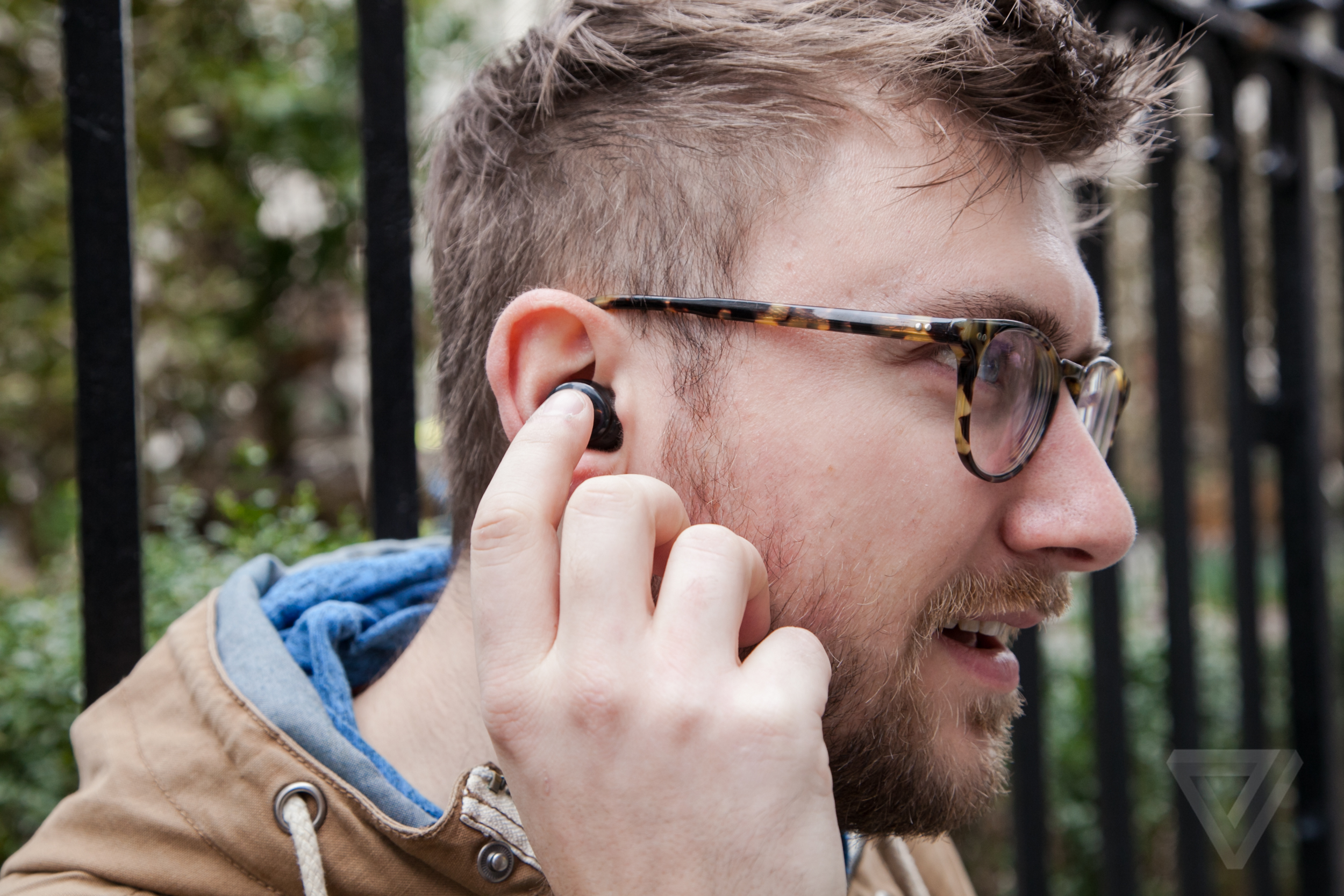 While I kept choosing to use the Dash over my other headphones, it was always in spite of its sound, which is not as good as you'd hope for from earbuds that cost $300. There is much more bass than you expect from earbuds of this size, but the mid- and high-range frequencies lack clarity. The Dash is also supposed to be able to make phone calls or let you access your phone's voice commands, but the quality of the microphone and the Bluetooth connection makes these almost impossible. Every time I tried to access Siri, Google Now, or Samsung's virtual assistant, I wound up shouting commands to no avail. Bragi, of course, eventually wants to skip this step altogether by building a native personal assistant into the Dash (akin to the Moto Hint), but it's another idea that's nowhere near ready — right now there’s only a robotic voice that helps you through the setup and the menus of the Dash.

Most of the extra features feel half-finished 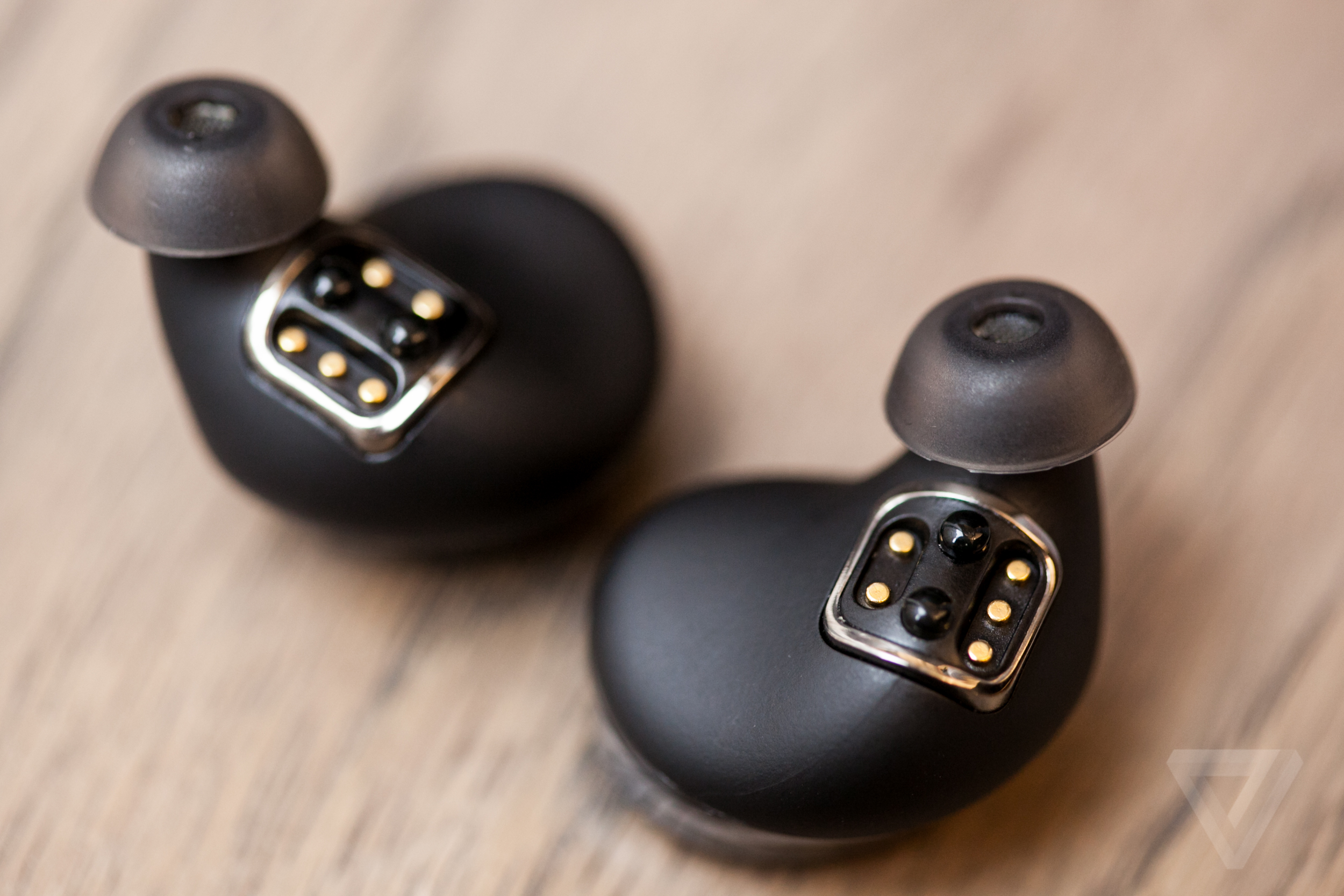 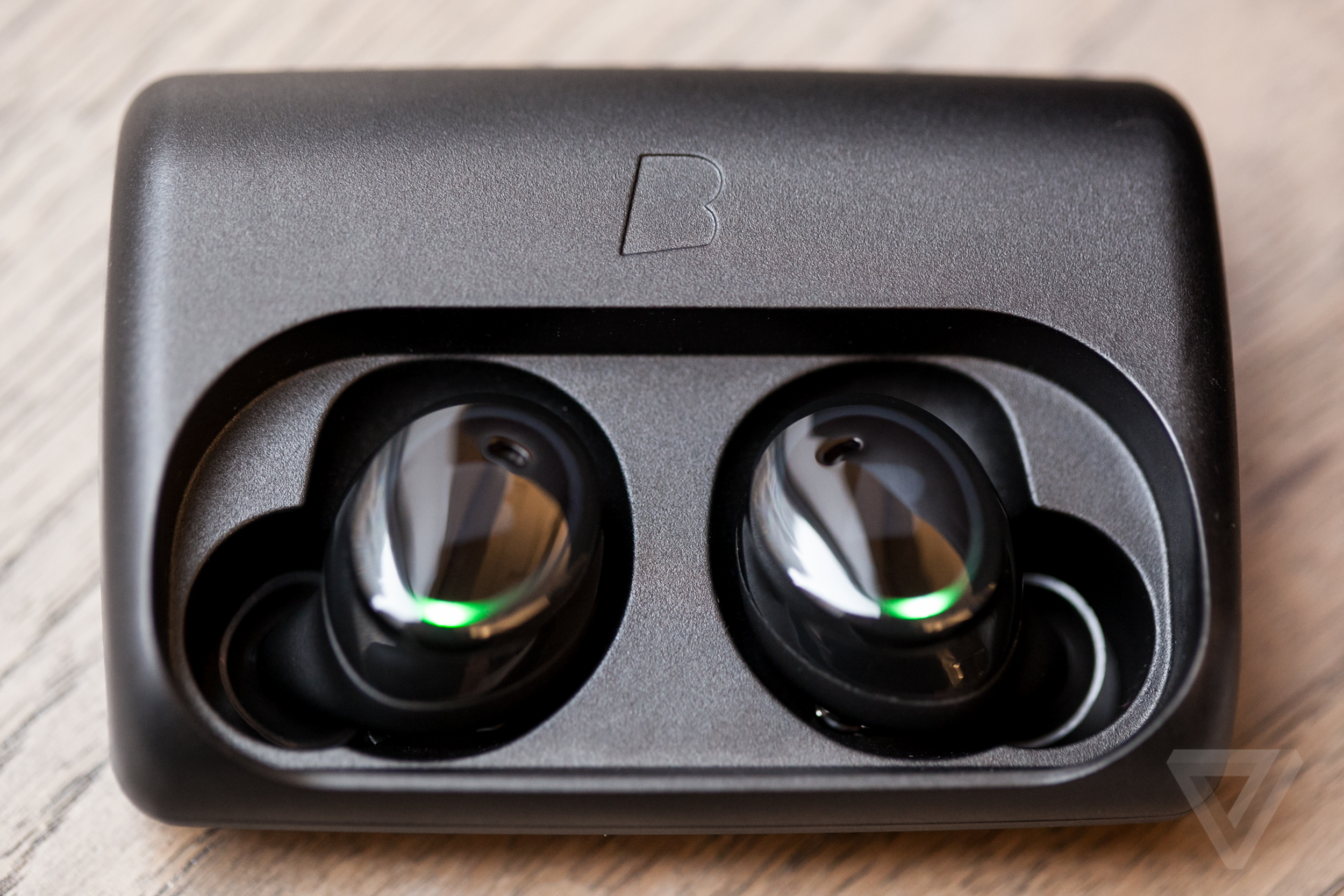 Then there are the fitness tracking features, which feel like they were tacked on late despite the fact that Bragi's touted them from the beginning. The heart rate monitoring is inconsistent, and many times it just doesn't measure anything. If you can get it to work, the Dash will track your heart rate along with steps and time elapsed all on its own, meaning you can leave your phone at home — which is great, because you can load up to 4GB of music on the Dash itself. But the Dash can't collect GPS data, and the Bragi app won't even let you save each workout session — instead, the results disappear after the Dash reads them back to you at the end of your workout. The only workaround is to pair the Dash to a third-party app, which means you still have to bring your phone with you, and is a hit-or-miss experience anyway (not all apps play well with trackers that use Bluetooth low energy).

Even "audio transparency," a feature that impressed me so much at CES, is a bit of a let down. It lets you hear someone who's speaking to you, and can make you more aware of your surroundings, all without disrupting the whatever you’re listening to. (My favorite use of this feature was when I was using the Dash with my Gear VR; the audio transparency feature let me hear my girlfriend calling to me from the other end of the apartment.)

But audio transparency's versatility is far more underwhelming than I had imagined in that quiet Las Vegas hotel room. Right now, there's no way to modulate what it hears, or how loud it sounds compared to whatever else you're listening to at the moment. The pass-through audio clips when it picks up really loud or high-pitched noises. I wanted to use it while running or biking to help make sure I didn't get hit by a car, but even gentle wind seems to overwhelm the microphones. The ability to set constraints, like you can with the Here earbuds, is something Bragi desperately needs to build into the Dash.

A lot of these problems are issues with software, and the good thing about software is that it can be changed. Some of this stuff can, and probably will, be fixed by Bragi as more and more people use (and buy) The Dash, and the company has even started rolling out monthly firmware updates. There's also a decent amount of help available; the app has a section where you can chat with dedicated support staff, there's an unofficial (but pretty official) Facebook group, and an entire Dash subreddit. (The last two are quickly filling up with comments on many of the issues I've experienced.) 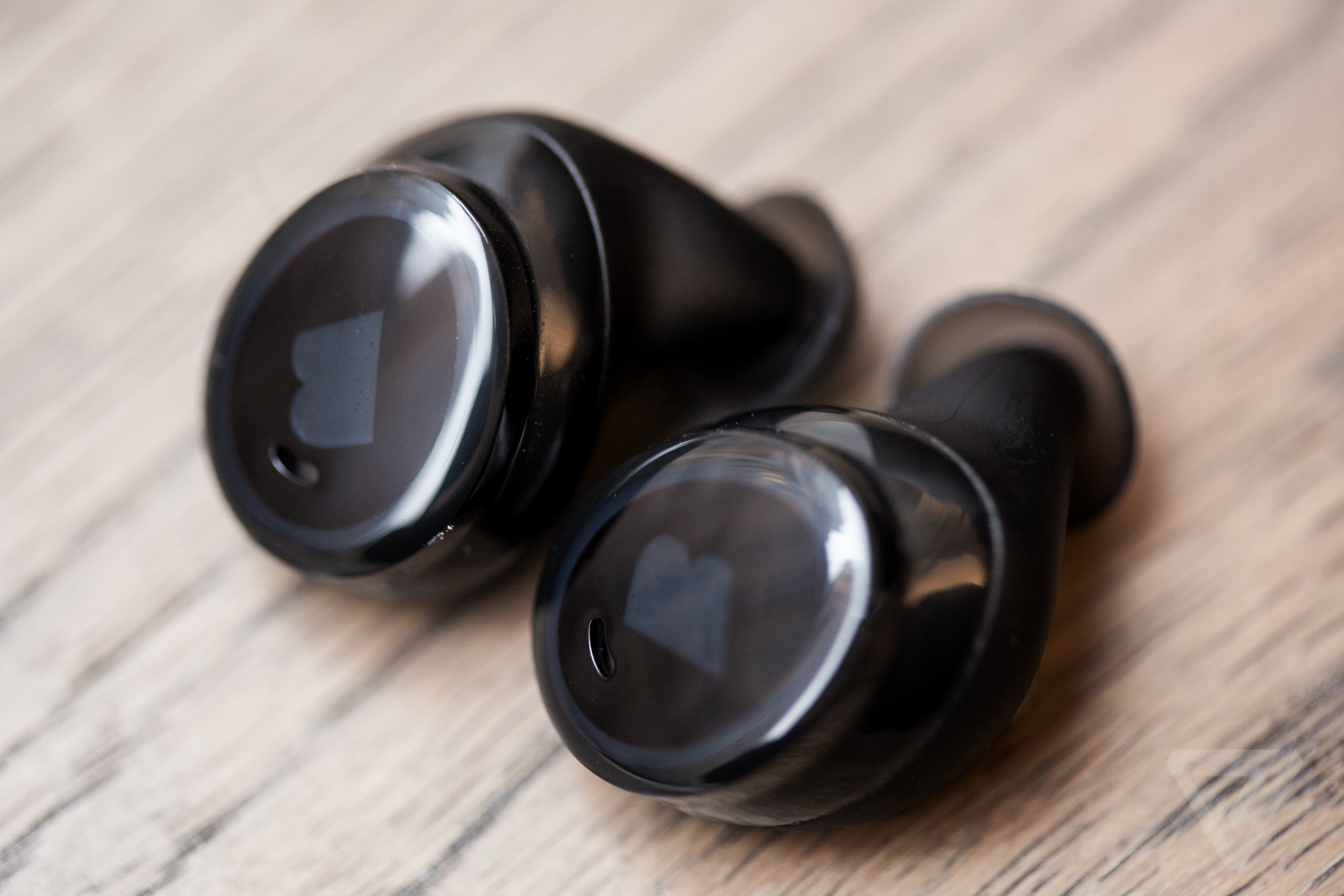 Bragi could — and maybe should — have made basic, single-purpose wireless earbuds. But from the outset, the company has viewed and promoted the Dash as a much more fully-featured computing platform capable of replacing multiple devices. The Dash is closer to usurping some of these than others, but it’s a long way from replacing any one. And while the company has survived production delays that would have crippled other Kickstarter campaigns, Bragi has lost time, which was one of its biggest advantages. Instead of being first to market in 2015, it's now going to start selling the Dash just months before Apple is reportedly going to release its own take on wireless earbuds, and a number of other startups are aiming to do the same.

All that competition means the future of wireless earbuds looks extremely bright. For Bragi, though, the current version of the Dash is an imperfect experiment. Lauren Goode recently wrote that people who buy activity trackers shouldn't have to be beta testers, and I think that same logic applies here. Some of the problems can be fixed by software updates, while others will surely have to wait for new hardware. But all of the issues are likely to nag even the most anxious customers and Kickstarter backers.