I had my bones rattled by the Balluga smart bed

Not since I fell asleep on top of my tablet watching House of Cards in bed have I laid down on top of so much technology. Testing out the Balluga smart bed — which launches today on Kickstarter — felt pretty normal until I was handed a smartphone with a connected app and told to go nuts with the bed’s many controls.

And there are a lot of controls. The Balluga is built from air-filled spherical cells that deflate and inflate on command, allowing you to adjust the firmness in different sections of the mattress. There's also a vibrating massage function, built-in air conditioning that sucks up air from the room to adjust the temperature under the duvet, under-frame lighting that turns on when you get up in the middle of the night, and a snoring detector that’s supposed to tilt your head and stop your snorting in your sleep. It was all a bit much really, but luckily I was already lying down. 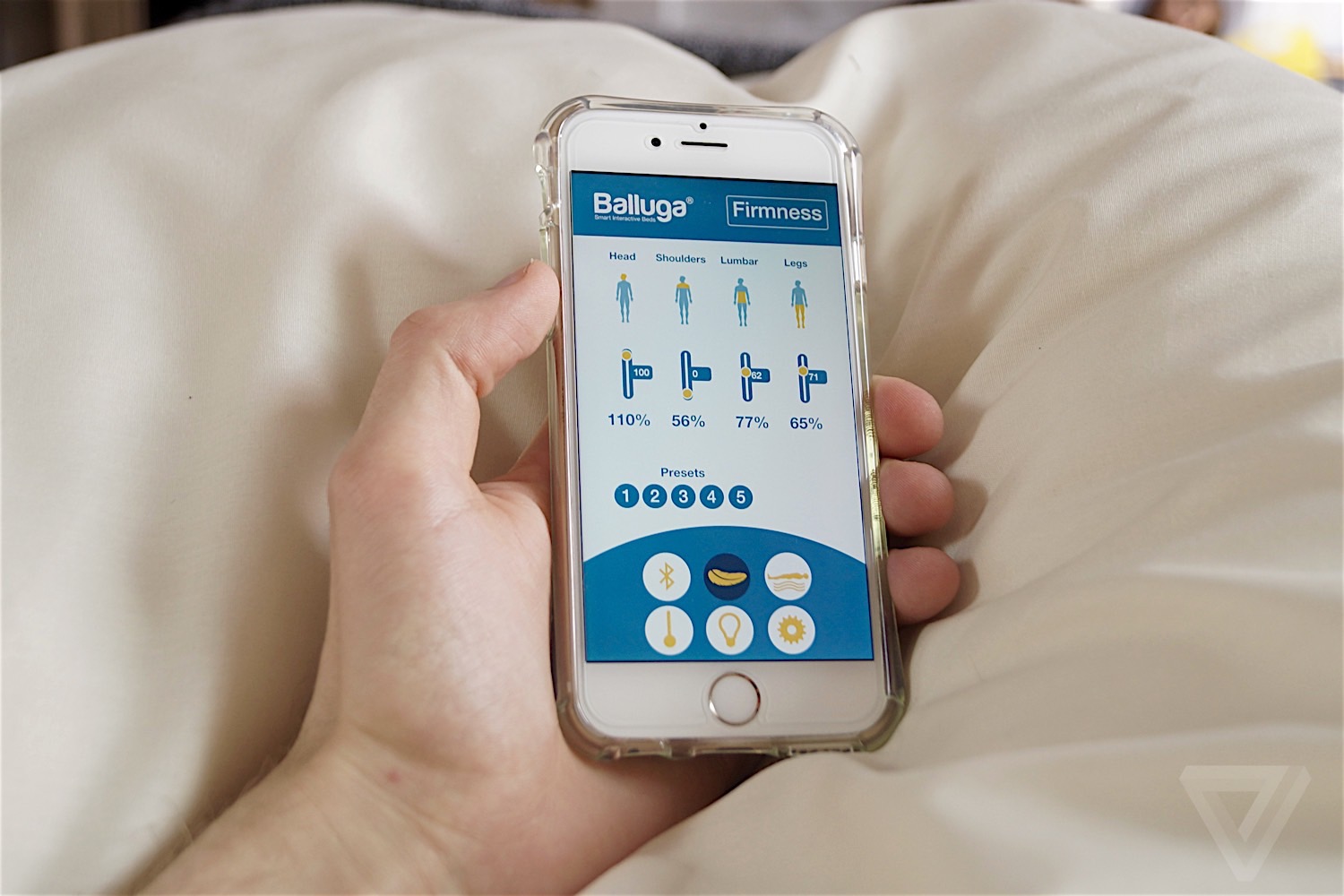 The Balluga app allows you to control the bed using your phone, although some functions — like sleep tracking — have yet to be developed.

Trying to sleep on a bunch of "inflatable spherical cells" may sound about as comfortable as dozing in a ball pit, but it's just the opposite. The bed was firm and springy, and by inflating and deflating these cells you can tweak it exactly to your liking. Balluga's CEO, Joe Katan, says that theoretically this means the bed will never lose its firmness — you can always just top it up with more air. "It's completely replenishable," he tells The Verge, although there haven't been any tests of the Balluga's longevity.

Adjusting the firmness of your mattress section by section is perhaps the most appealing aspect of the Balluga. If you’ve got back ache, for example, you can make the lumbar part harder or softer, and in a double bed you can even adjust the two sides independently depending on what you and your neighbor want. I don’t suffer from any aching body parts myself, and have always been fairly indifferent to what I sleep on, but feeling parts of the bed stiffen and relax underneath my limbs convinced me that this would be a very useful feature if you’re at all mattress-sensitive.

Balluga's promise of "anti-snoring technology" may be a little too confident
Unfortunately, the strength of these adjustments may be a little too subtle to deliver all of Balluga’s claims. The company promises that its beds offer "anti-snoring technology," for example, using built-in microphones to detect when someone is snoring and tilting their head to stop the noise. This is done by deflating or inflating the air cells under the pillow — which is silent, slow, but a bit too subtle, with only a small amount of movement. While this method might work for some gentle snorers, it’s not likely to make a difference to those with more persistent problems.

Dr Himender Makker, a sleep specialist at University College London Hospitals, told The Verge that in cases when a sleeper needs to change position to stop snoring, a significant adjustment is what's required — having them sit upright by at least 35 degrees. The Balluga's gentle tilting and shifting probably wouldn't help here, and Katan admits that this anti-snoring tech also wouldn't be able to combat more serious problems like sleep apnea — a chronic condition where sleepers pause breathing and then resume with a snort or a choking sound. 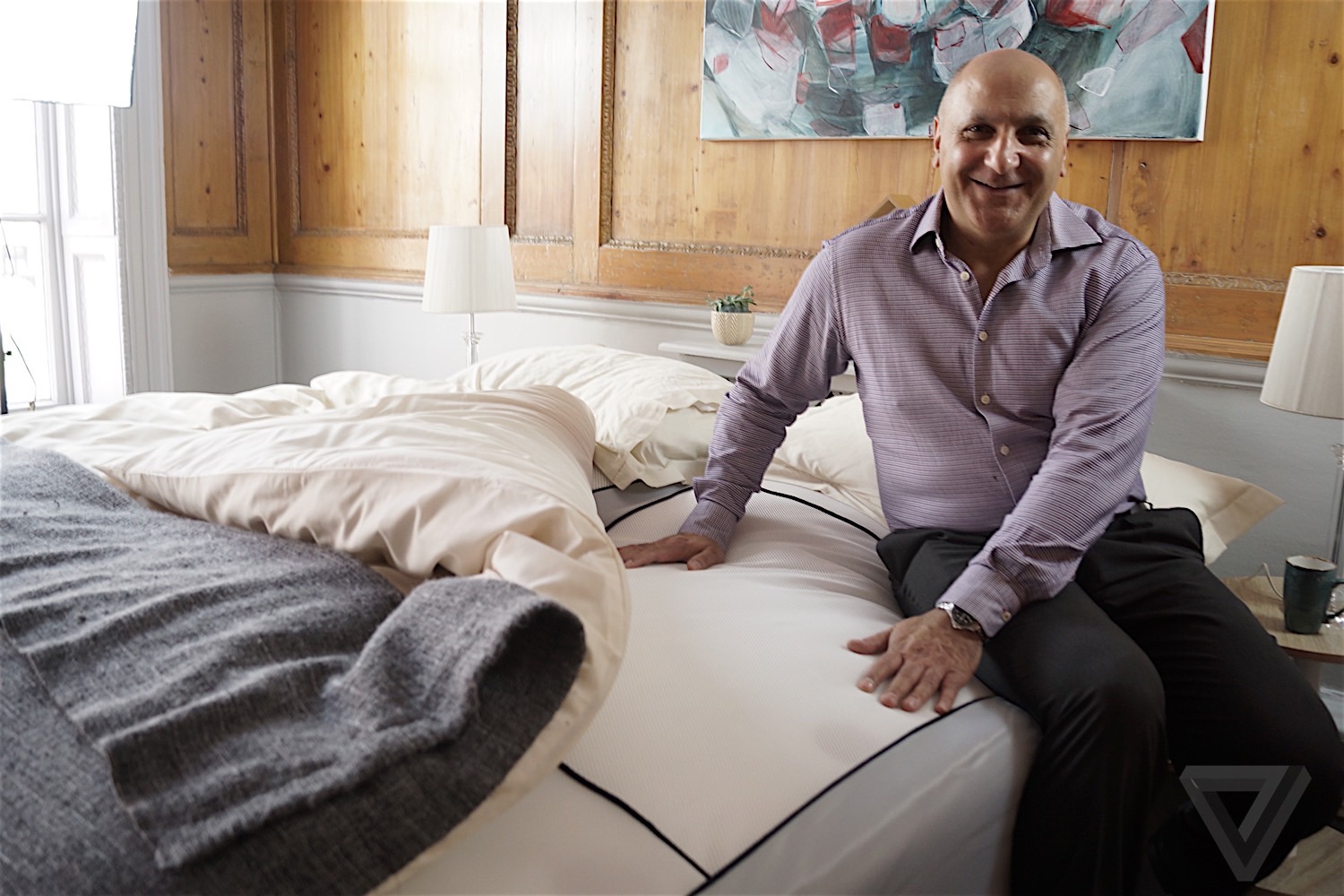 Katan tells me that the company does want to do medical trials using the bed (and he has plenty of anecdotal evidence of its success), but that there are only a few working prototypes at the moment. "So we need to be funded," he says. "We’ve spoken to spinal surgeons who really want to test it, but we’ve only just put these two [demonstration] models together in the last couple of weeks in the UK, and about four weeks in the US." So like a lot of smart products, some of Balluga’s claimed benefits are just claims at the moment.

But just because a smart bed can’t cure your snoring doesn’t mean it’s not going to be helpful at all. Dr Makker says that while lifestyle and environmental factors — how much you exercise and how much light there is in your room, for example — wield a massive influence over how well you sleep, being comfortable on your mattress is also incredibly important. Adjusting the bed's firmness, or cooling it down using built-in air conditioning, helps with that. There’s also a massage function that can vibrate individual sections of the bed, sending waves of tremors up and down your body, or pulsing in specific spots. This feature was straightforwardly fun, with the vibrations on full intensity shaking me about quite merrily, while the lower settings were gentle pulses (which you can even use as an alarm clock). Ditto the under-frame lighting, which turns on when you get out of bed in the middle of the night, guiding you out the room.

Features like this — added on for the fun of it rather than because they're proven to aid your sleep — do make the Balluga feel a little too much like a toy. But the underlying technology of inflatable air cells seem sound and helpful. And while the prices certainly aren't cheap ($1,199 for a single mattress up to $3,299 for a California King), they're in the right range for the top-end of the market. However, from a reviewer's point of view it's just too difficult to say whether or not the Balluga smart bed can live up to its promises. Practically speaking, you've got to sleep on it.