Eager to find answers, I did what any self-respecting analyst would do: I opened my ears to the Music of the Spheres, and took a walk around my neighborhood. Sure enough, the universe presented me with what I sought. Etched onto the driveway of a neighbor's home was this chalk art. 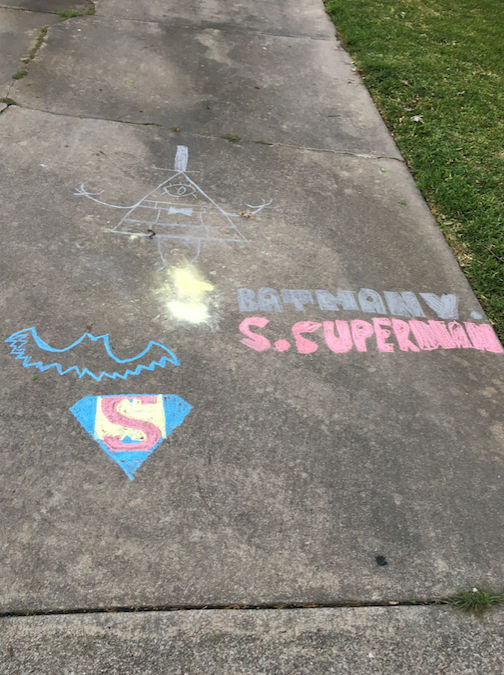 The Illuminati Pyramid dances above the logo for Batman v Superman, raining fortune upon the franchise. Now, to the untrained eye, the symbolism on display may be difficult to parse. Allow me to help.

The eye is all-seeing, as in all the people will see Batman v Superman. The triangle symbol represents positive change, as in DC Comics movies have been struggling in the past, but now they will prosper. Traditionally, the Illuminati Pyramid features the phrase "Novus Ordo Seclorum," or "A New Order of the Ages." See you later, Marvel. You had a good run, but it's DC's time in the sun!

Now, as a skeptic, I recognize there are some potential inconsistencies or points of contention. For one, that Illuminati Pyramid is actually a character from the children's cartoon Gravity Falls. For another, there's the issue of Batman v Superman's drop-off in sales between Friday and Sunday.

But those are the words of someone closing their ears to the wisdom of the universe. The chalk hath spoken. I choose to listen.