Beyerdynamic’s new T5p headphones teeter on the precipice of greatness

Like people, headphones are complex, multifaceted, and idiosyncratic. Each has its own particular version of reality, and the ones you ultimately like best are those you believe you can trust. That's where I find myself with Beyerdynamic's second-generation T5p (aka T5p.2) headphones: I trust them to deliver true, faithful, and at the same time pleasing sound. Their tonal balance has just the right amount of everything, from shimmery treble to rumbling bass, and I never have to question if a song is being misrepresented by them.

So what's the price of this ultimate level of trust? In Beyerdynamic's precisely engineered world, the manufacturer’s suggested entry fee is $1,299, though you can find the T5p.2s online for $1,099 now. Either price tag will immediately seem extravagant to most people, but the way I've come to think of these new T5s is akin to how driving enthusiasts think of a Porsche 911. It's a finely tuned piece of machinery that commands a premium for its unique performance and heritage, though not quite as much as the gloried marques like Ferrari and Lamborghini. Beyerdynamic's new top-tier headphones — the T5p and its open-back sibling, the T1, both recently updated — are actually at the accessible end of the scale for high-end audiophile gear.

Editor markup for Beyerdynamic T5p.2 headphones gallery. This is only visible in the story editor.

The T5p.2s are intended to serve as the portable version of Beyerdynamic's flagship headphone. To that end, they come with a closed-back design, which provides some isolation between external noise and the music played within. I say "some," because these headphones leak sound out almost as readily as an open-back variant. At this tier of high-end audio, every manufacturer sacrifices noise insulation at the altar of higher quality and accuracy of audio playback, which is just about fair enough. That does mean, however, that the T5p.2s are not suitable for discreet use outdoors or while traveling. You'll either be annoyed by the din of cars passing by or you'll earn disapproving looks from strangers who might not be as enthused about Skrillex as you might be.

It's a shame, really, because the T5p.2s are otherwise very friendly to portable devices. They have a low 32 Ohm impedance, and I'm able to easily power them with smartphones like the Xiaomi Mi 5, LG G5, and iPhone 6s Plus. That's obviously not the ideal way to use an $1,100 headphone, but it speaks to the T5p.2's flexibility: this pair of headphones can hang with the best in terms of sound reproduction, but it still takes care to work with the most abundant audio sources that people have with them.

In terms of design, the T5p.2 is difficult to distinguish from its predecessor, the T5p. The design language is easily recognizable as Beyerdynamic's, having been exhibited across other product lines like the T1, T90, and DT700, 800, and 900 series. Basically, when Beyerdynamic builds a professional-quality headphone, it looks like this. Just like with Porsche, this German company is only refining a formula that's proven successful over many years. Two metal arms hold a pair of surprisingly light plastic ear cups, which are adorned with a nicely patterned circular metal plate on the outside. The T5p.2's ear pads and richly padded headband are both made of artificial leather, lending the headphone a suitably premium feel. Each set of these headphones is handmade in Germany, and gives more credence to the stereotype about German manufacturing being impeccable. The T5p.2s are built with care and precision, leaving me confident that they'll last as long as such a considered purchase should — and even if they don't, Beyerdynamic covers them with a five-year warranty. 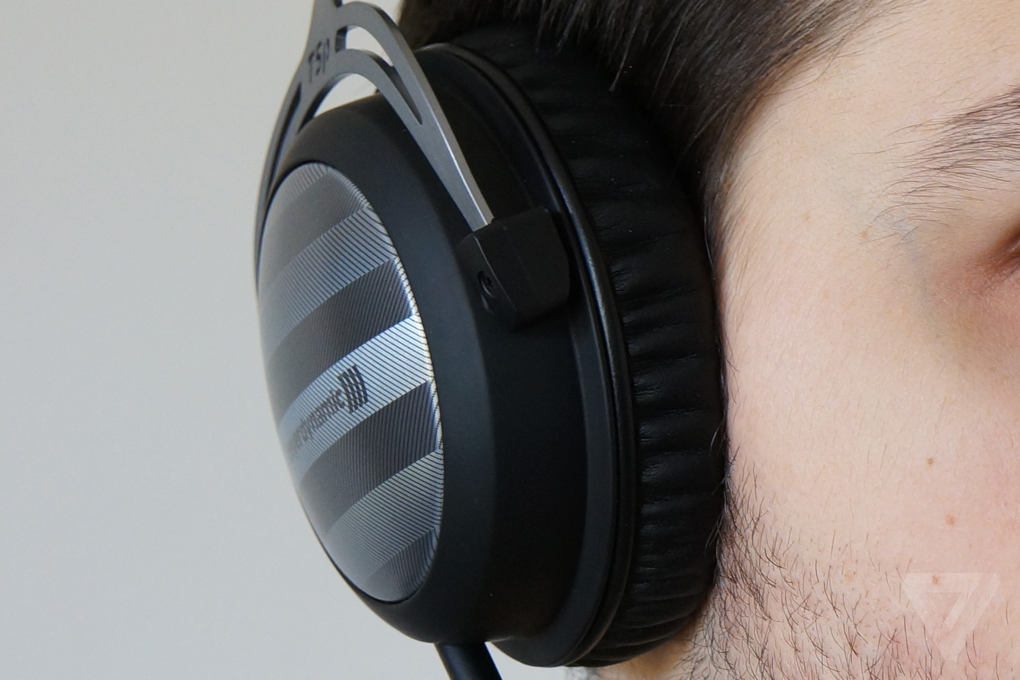 There are a couple of downsides to Beyerdynamic's design that prevent me from recommending it with full enthusiasm. Firstly, even with the delightfully comfortable memory foam pads it includes, the T5p.2 makes the cardinal sin of having perfectly round cups. Human ears are, for the most part, D-shaped, so I find Beyerdynamic's insistence on round ear cups both perplexing and frustrating. The T5p.2s fit around the sides of my ears with plenty of space to spare, but I have to tuck my earlobe into the bottom of the pads. It's not a huge pain point, but it detracts. The other issue is more of a problem: I find the T5p.2s build up a pressure at the top of my head during prolonged listening sessions. The padding is plentiful and the headphones themselves are light for their size, but they're definitely not the most comfortable pair I've ever worn.

Designed, engineered, and handmade in Germany, the T5s were built to last

The cable of the T5p.2 is thick, braided, and basically impossible to tangle. I love that it terminates in standard 3.5mm connectors, meaning that if it ever fails (or I just fancy auditioning other cables, because that's a thing audiophiles do), I can swap in another standard cable in its place. On the other hand, I don't love the microphonics it produces — those are the noises generated from the cable rubbing against clothing and the like — though they're thankfully irrelevant once you start playing music. 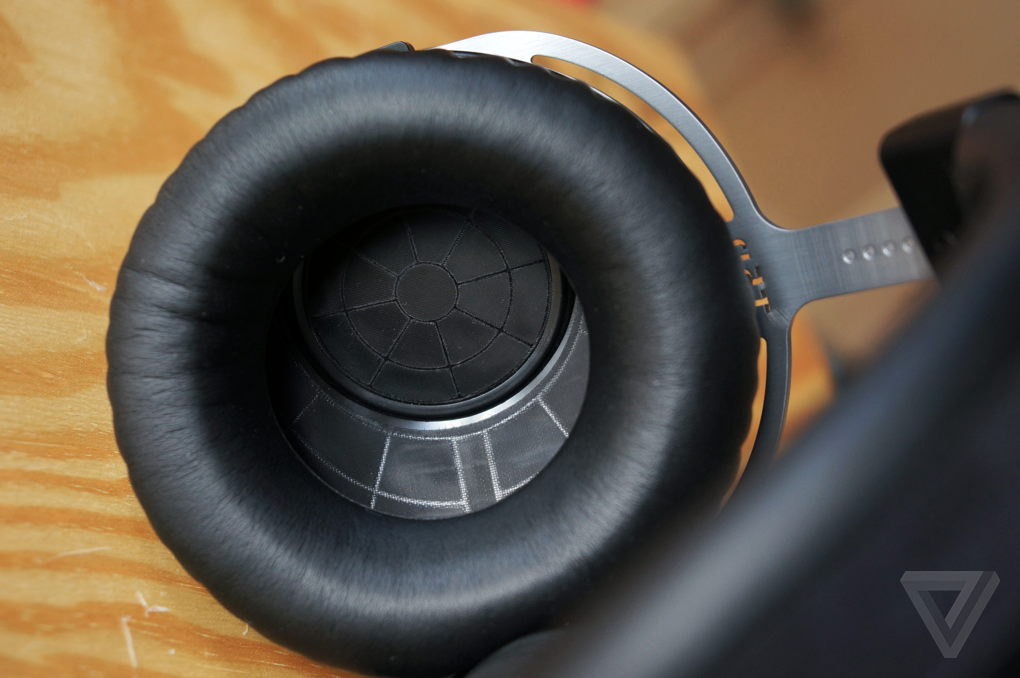 Most external things fade into insignificance once you start playing music on Beyerdynamic's T5p.2s. They are just stunningly good, no matter the genre being played. The original T5p headphones were famed for their accuracy, but my colleague Chris Ziegler was among the people unimpressed by the flatness of their sonic presentation. He found them lacking the lower-frequency punch that's required to thrill and excite a listener, and I think Beyerdynamic has rectified that shortcoming brilliantly with this new edition. Bass is never overwhelming, never flabby, and never misplaced — but it's always there when you want and expect it1. That makes the T5p.2s both exciting and analytically accurate. Because they're nominally closed, the T5p.2s don't have the widest soundstage in the world, but their instrument separation and placement are still highly accurate.

Bass junkies would do well to pair the T5p.2s with Oppo’s HA-2 portable DAC and amplifier. Its bass boost is the perfect complement to the accuracy of these headphones.

I have nothing bad to say about the sound. Nada.

Precision and articulation are the two words that come to mind most readily when I try to define the T5p.2s' sound. These headphones exhibit exceptional control of distortions at high frequencies, and get right down to the most granular details on multilayered recordings. Arca's album Mutant is a great example, combining all sorts of alien sounds and screeches into a dense aural canopy that can easily overwhelm mediocre headphones. Hell, there are some $600 headphones that can't convey the full intricacy of the music, rendering some of the high-frequency segments as a buzzy noise. Beyerdynamic's T5p.2s handle Arca and other electronic musicians with aplomb, but they shine with classical music and vocals too. The astonishing thing about them is that I can't categorize them as being good for only a certain style of music: I get goosebumps from male choir and orchestral performances just as I get my kicks from burbling basslines by Burial. 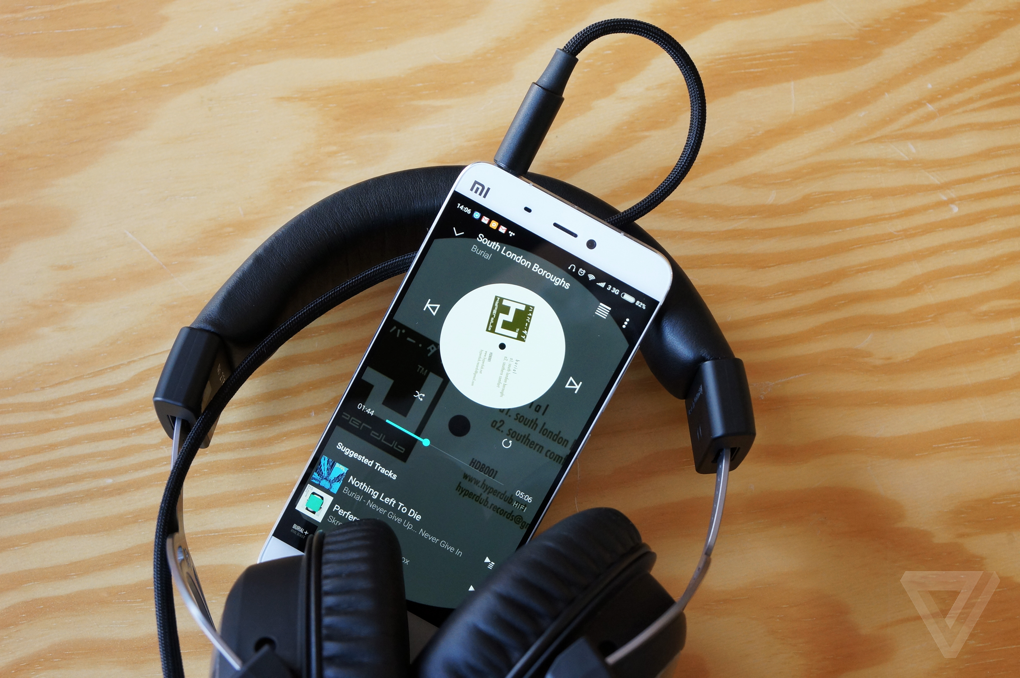 Beyerdynamic has nailed the balance of bass, mids, and treble. Instruments and vocals sound natural and real, and the overall effect is the point I made in my introduction: I find myself trusting these headphones above any others at my disposal. That list includes the Audeze EL-8, AudioQuest NightHawk, and Audio-Technica 2000z, each of which aspires to occupying the same stratum as the Beyerdynamic pair. Sure, the T5p.2s are the most expensive ones, but in this case price proves an accurate guide since I also consider them the best.

I wouldn't describe the Beyerdynamic T5p.2s as a relaxed listen. If you're looking for mellowed-out, sugary sweet playback, I'd point you in the direction of the aforementioned NightHawks. They will never offend your ears, even if the music actually calls for some offense. Beyerdynamic's approach, which I prefer, is to present everything starkly and directly, so you end up with the full effect of every crescendo and the full impact of every glorious bass drop.

The price is high, but so is the quality

A Porsche 911 is a supercar that mere mortals can contemplate one day being able to obtain, and Beyerdynamic's T5p.2s are the headphone version of the same. They have the performance to compete with audio gear costing twice their $1,100-ish price. So if you want super headphones, you have to accept the super price — I know of no headphones that are both cheaper and sound better than these T5s. But, and this is where the price becomes more of an issue, I can name multiple sets of really great headphones that sound somewhere close to the T5p.2. Try Bowers & Wilkins' stylish P7 or Sennheiser's venerated HD 600, both at just under $400, or HiFiMan's scandalously underpriced HE400S planar magnetics at $299. I'm a big fan of the bass-rich Philips Fidelio X2, also costing $299, and for truly portable use there's the $249 Audio-Technica MSR7. For every Porsche model, there are a dozen BMW and Audi alternatives.

The Beyerdynamic T5p.2s are the first set of headphones that prompted me to think I might never need another one. They're light, extremely durable, and perfectly understated in their looks. Everything I hear from them, I like. If they could just fit me as well as they play music, I'd happily spend the four-figure sum required to acquire a pair of my own.