Amazon's Echo Dot lets you put Alexa inside any speaker

By Jacob Kastrenakes and Lauren Goode

Amazon's newest hardware product might look like a compressed version of the tall Echo speaker, but its place in your home will likely be very different. Today the company unveiled Echo Dot, which is basically an Echo without the big speaker housing. Instead, you either plug the puck-like device directly into another speaker or connect it to another speaker over Bluetooth, and the Dot will play music and communicate with you through there.

If you've seen an Echo before, the Dot will look familiar: it's as though Amazon just sliced off the top of its surprisingly popular speaker and put it in front of you. It's a small black puck with the same glowing blue ring around it to indicate when it's listening. It has the same array of microphones built into the top of it, so you can talk to it from across the room. Like the big Echo, it has to be tethered to an outlet, for power.

It pretty much works the same, too, with the exception of having a powerful speaker. You just ask Alexa questions through the Echo Dot or tell the virtual assistant to do things, and the Dot will respond. That includes everything from getting a weather forecast, to calling an Uber, to controlling smart home products around your house. 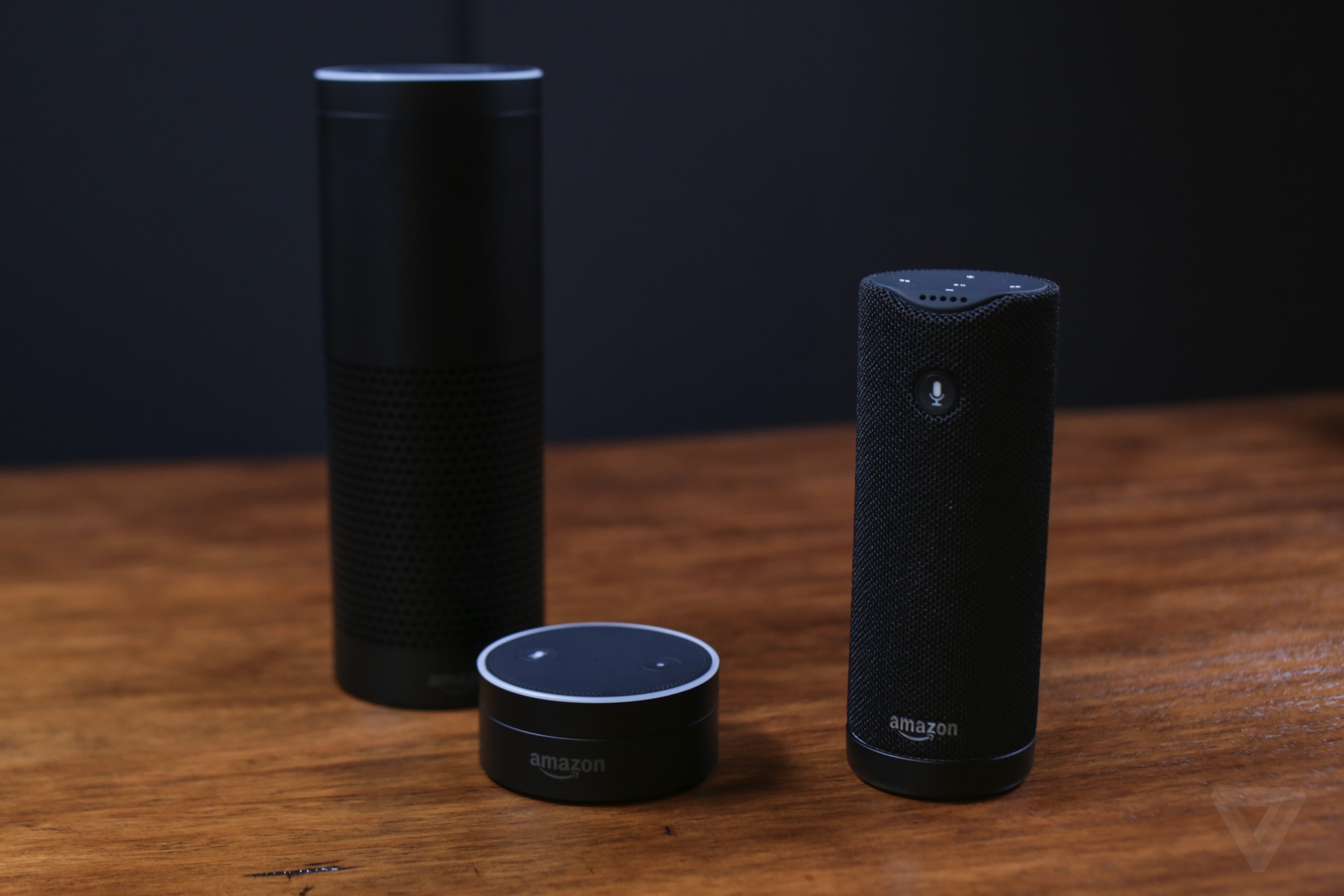 The Echo Dot does have a tiny speaker in it for use as an alarm clock or timer, but really, the value here is not that this thing will be a speaker that you blast music from. Amazon, at a press event in San Francisco yesterday, even had the Dot attached to a $2500 Bang & Olufsen speaker to underscore how much this little thing is not meant to be a stereo speaker. And even if you do buy several Dot speakers, you can't network them, so this isn't Amazon's attempt to replicate a Sonos-like experience (at least, not yet).

The main idea is that the Echo Dot that it will bring Amazon's voice assistant, Alexa, to many other devices throughout the home. Amazon is, basically, trying to make Alexa available everywhere through differentiated pieces of hardware: it sees the Echo as a kind of central nervous system, while the Dot is something you would tether to your "real" speakers, or put in another room. The new portable Amazon Tap, also announced today, is something you would carry with you. And then, of course, Alexa is also a part of Amazon's Fire TV system.

The Echo Dot goes on sale today for $89.99. That's not cheap, but it's a big drop from the $179.99 price on the full Echo. There's also an oddity about how you can order it: you can't buy the Echo on Amazon.com. You have to order it through Alexa. That means unless you already have an Echo or a Fire TV, you can't buy one. Not yet, at least.

Photos and video by Tyler Pina.