One year after throwing a massive, multi-day party, Tumblr is returning to SXSW Music with a new focus. The 79 Cents event being held on March 16th — its name reflects the gender wage gap in the US in 2014 as per the Institute for Women’s Policy Research — will boast a lineup of almost entirely female musicians, "feminist art installations" from Tumblr user Animated Text and a group of collaborators, and a guest appearance from former Texas state senator Wendy Davis. (Davis shot to national renown in 2013 when she staged an 11-hour filibuster to block a bill heavily restricting abortion in the state.) Jhené Aiko, Tacocat, Little Simz, Empress Of, and Crystal Castles are all playing the event.

Along with its Interactive showcase U Up? on March 12th, the 79 Cents event is one of only two parties the platform is throwing, a massive decrease in scale from its presence at SXSW last year. At the 2015 festival, Tumblr IRL occupied the Ironwood Hall for four full days of performances and collaborative visuals. "It was incredible, it was insane, and I don’t think it needed to be replicated," said Nate Auerbach, Tumblr’s head of music. "When we look at SXSW and figure out what we’re going to do, it’s not necessarily about how many people we can fit in the door… It’s about creating the best experience, [one] that makes people feel like they’re inside the Tumblr community." According to Auerbach, orienting one of this year’s events around Tumblr’s feminist voices emerged naturally when he started thinking about the bands he wanted to book. "The artists I was most excited about were pretty much all female-fronted bands," said Auerbach. "We’re celebrating the female voice in many contexts." 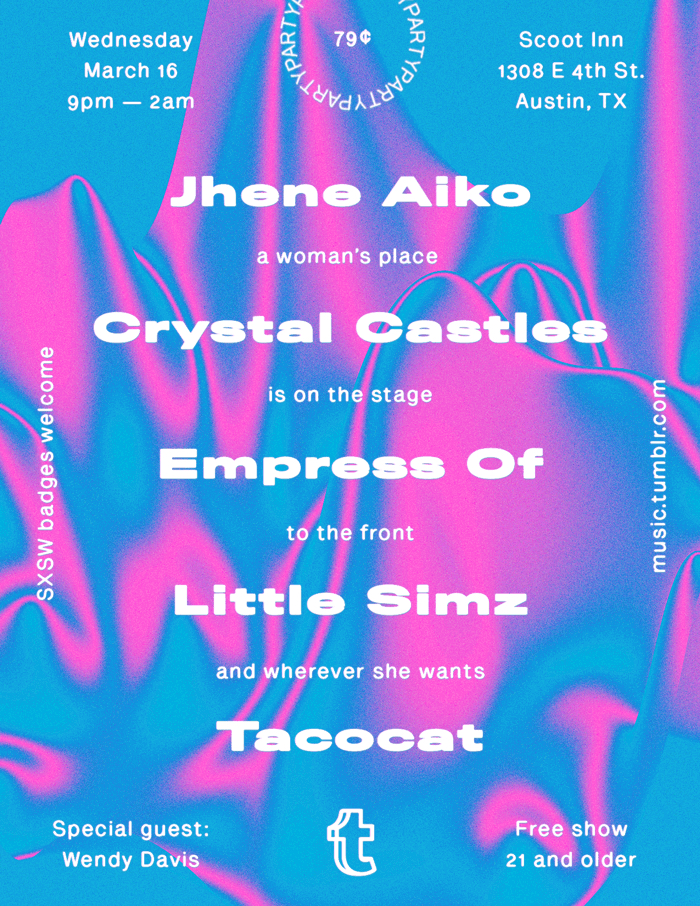 The event’s focus on Tumblr’s feminist voices is appealing, but it could ultimately be soured by the company’s decision to book the reconfigured Crystal Castles — a duo made up of producer / songwriter Ethan Kath and vocalist Edith Frances — as one of the event’s performers. The band’s future (and Kath’s reputation) was thrown into turmoil in October 2014 when original bandmate Alice Glass announced she was leaving it behind. "My art and my self-expression in any form has always been an attempt towards sincerity, honesty, and empathy for others," wrote Glass. "For a multitude of reasons both professional and personal, I no longer feel this is possible within Crystal Castles."

Glass and Kath engaged in a public back-and-forth in the year following her departure from the band. Kath casted aspersions on Glass’ creative contributions to the band’s catalog; Glass reiterated that her position within the band had become untenable. While Glass has never explicitly accused Kath of abuse, she’s implied that she was "mistreated and manipulated" during her time in Crystal Castles. When Glass released her debut solo single "Stillbirth" in July 2015, she donated the proceeds from its digital purchases to a charity helping survivors of domestic abuse, sexual violence, and incest. Crystal Castles reformed last year with Frances as its new lead vocalist and has released two new tracks to date, "Frail" and "Deicide."

"It's my opinion that he's not an appropriate artist to be performing."

"I think the thing that’s important here is that we’re celebrating the female voice on Tumblr," said Auerbach, "and that’s very much what Crystal Castles is… It’s not about having only women on the stage, it’s about being in the same place that men are, and that’s in front." When asked if Kath and Glass’ history affected Tumblr’s decision to book Crystal Castles, Auerbach replied, "No, because I’ve heard Edith’s voice, and I’ve seen photos, and I know enough that she’s incredible. I don’t get involved in the politics of the things."

Earlier this week, Glass posted on Facebook to emphasize her separation from Kath’s revamped Crystal Castles. "I want to again make clear I have absolutely NOTHING to do with Crystal Castles’ future albums or performances," wrote Glass. "And I do not want my imagery used in association with them. I left that band not because I wanted to but because I needed to." When asked for comment on Kath’s presence at an event framed as a celebration of women in music, Glass told The Verge, "As someone who knew Ethan Kath on a personal and professional level, it is my opinion that he is not an appropriate artist to be performing at a feminism-centric event."

Update March 3rd 10:10PM ET: Tumblr has removed Crystal Castles from 79 Cents' lineup. "We're hosting this event to highlight gender disparity issues," wrote a representative for Tumblr in a statement, "something that Tumblr and our community and our community cares deeply about, and we don't want the band's presence to distract from this important mission."

More from this stream SXSW Music 2016: The artists, speakers and breakout performances