"We believe that iPad is the perfect expression of the future of personal computing."

So said Tim Cook at the introduction of the new iPad Pro 9.7 last week. It’s exactly the kind of phrase you expect from Cook’s Apple: spoken humbly, but revealing a huge ambition. It mixes a thing that’s familiar (the good ol’ iPad) with an idealistic goal. And Apple likes to workshop these phrases until they have a fine, chamfered edge — it’s not "the iPad," it’s just "iPad." It’s a little confusing, but it’s definitely compelling, and when you first hear it you really want to buy in.

Everything I just said about that phrase also applies to the new iPad Pro itself. It looks so much like the iPad Air 2 that you’ll mistake it for one when you see it, yet the insides are so much more powerful it’ll blow your hair back. It’s packed with a weapons depot of "bests" for a tablet: the best screen, the best speakers, the best camera, the best processor.

All those bests could convince you that this PC could replace a laptop. Apple’s Phil Schiller certainly thinks so. When he introduced the iPad Pro, he said "There are over 600 million PCs in use today that are over five years old. This is really sad! These people could really benefit from an iPad Pro."

But even if the people who own those old PCs are interested, there are still a lot of reasons to doubt that this particular iPad is the one that will revolutionize personal computing. Doubters (myself included) are standing at the ready to blast some holes in that vision. This is easily the best iPad ever made, but can it really do all the computer things it takes to actually replace your computer?

To those doubters, the iPad speaks another expression: Damn the torpedoes, full speed ahead.

The most important thing to know about the new iPad Pro isn’t the specs or the speed — it’s the price. It starts at $599 for the 32GB model. It’s difficult to even compare that price to the just-reduced iPad Air 2, since Apple has set up the storage options for these models differently — but in general you’re looking at a $150 or more price differential. And if you’re really going to use the "Pro" in the iPad Pro version, you’ll probably want to pony up for the 128GB model, which is $749. Oh, and you will also probably want the Smart Keyboard for $149, and maybe the Apple Pencil for $99. 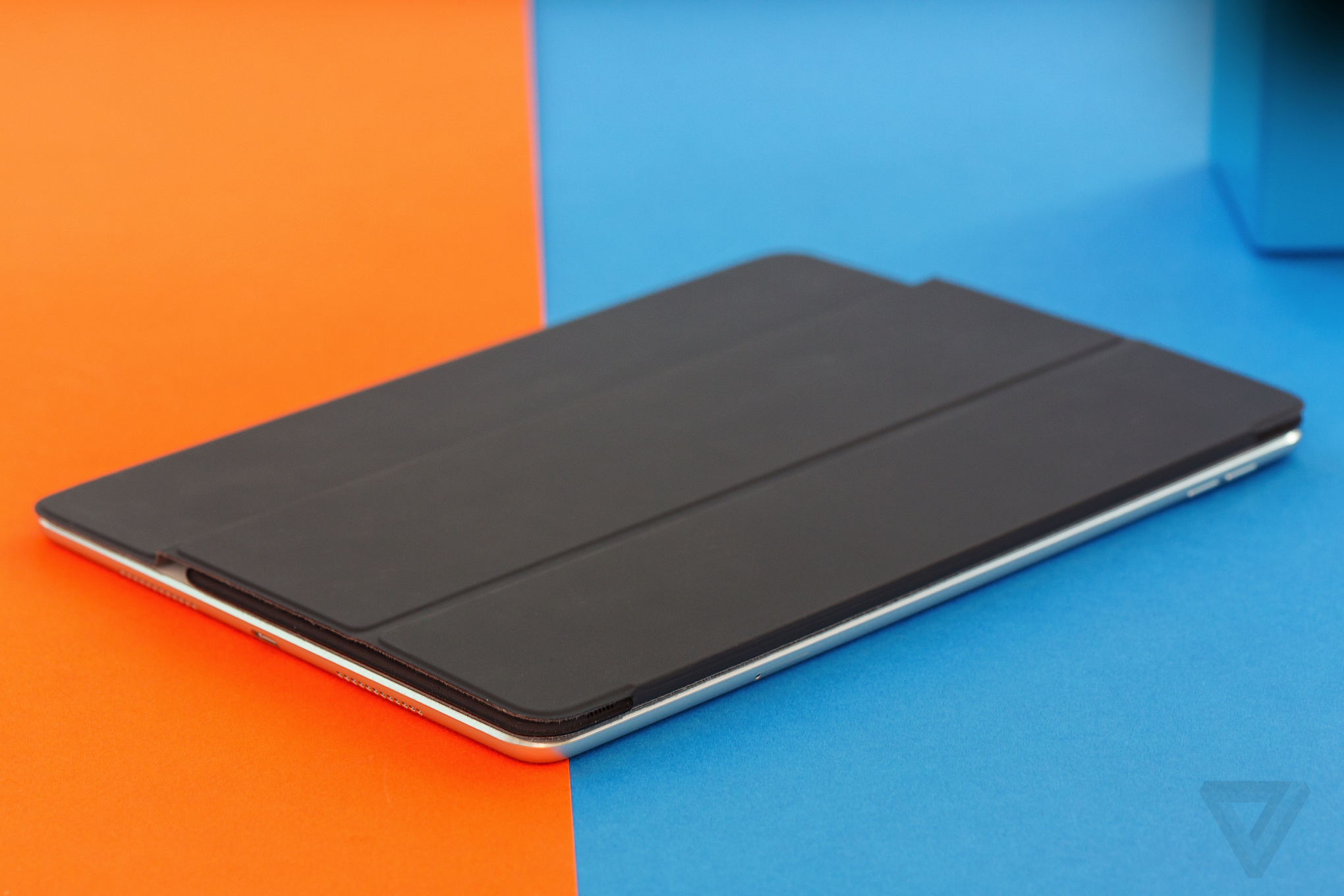 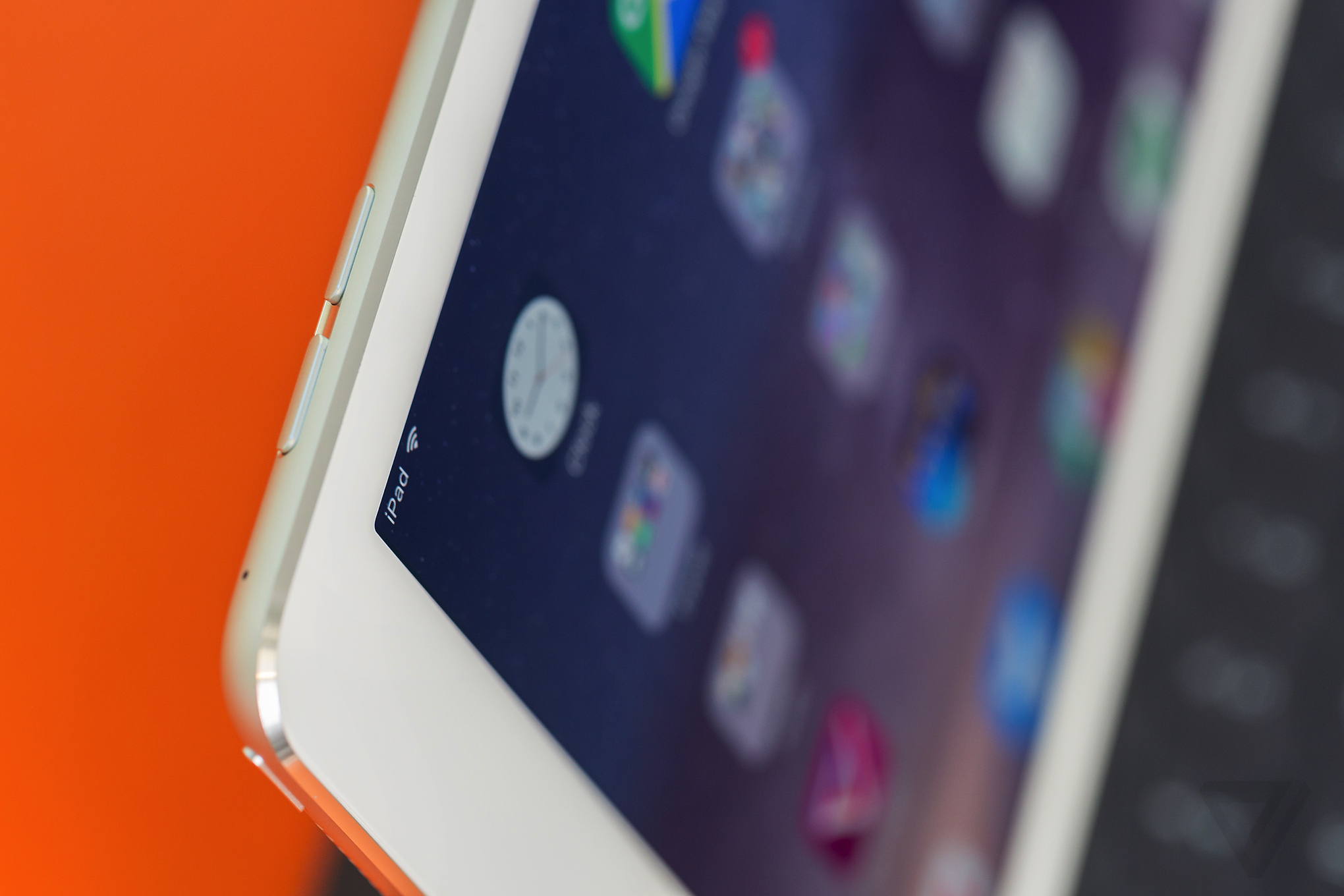 That’s where the "Pro" part comes in. The difference between the iPad Pro and the iPad Air is roughly equivalent the difference between the MacBook Pro and the MacBook Air: they can both essentially do the same things, but the Pro is just way, way faster. Figuring out what makes the Pro a Pro means you have to consider a constellation of features, and they don’t map exactly to what’s available on the bigger, 12.9-inch iPad Pro. Apple’s product naming strategy is confusing, but it’s got nothing on the feature matrix.

So: the iPad Pro 9.7 has the same screen size and the same basic body as the iPad Air 2, but the Pro’s screen is much better, with lower reflectivity and a wider color gamut. The Pro 9.7 also has a great new feature called "True Tone" that adjusts the color of the screen, which isn’t available on the larger iPad Pro. The 9.7-inch Pro has the same A9X processor as its bigger brother, but with 2GB of RAM instead of 4GB. It has four speakers and a smart keyboard connector, like the big one. It also has a very good 12-megapixel camera (and the concomitant camera bump), which is better than what either the Air 2 or the larger Pro have.

Oh, and the iPad Mini 2 and iPad Mini 4 still exist, for some reason.

Got all that? Good — you can forget almost all of it. Because if you’re interested in an iPad, your decision comes down to two things. What size screen do you want and — again — how much are you willing to spend to try out Apple’s vision for "the future of personal computing?"

My favorite thing about the new iPad Pro is the screen. Apple says it’s less reflective than the iPad Air 2 — 40 percent less, to be precise. But while I couldn’t really see that, I could see the True Tone color technology. There are hidden sensors on the face of the iPad that detect the color temperature of the room and automatically adjust the color temperature of the screen.

The idea is that it’s supposed to make your screen act more like a physical piece of paper. When you look at a white sheet of paper in yellow light, you’re actually seeing a more yellow color tone, which is easier on your eyes. The iPad Pro’s screen still looks like, well, a screen, but it is actually much nicer to look at. When I flicked True Tone off, suddenly the screen got very blue and looked really unnatural by comparison. It’s the same color I’ve been looking at for years, but suddenly it looks jarring.

The True Tone display really works, and it's really nice 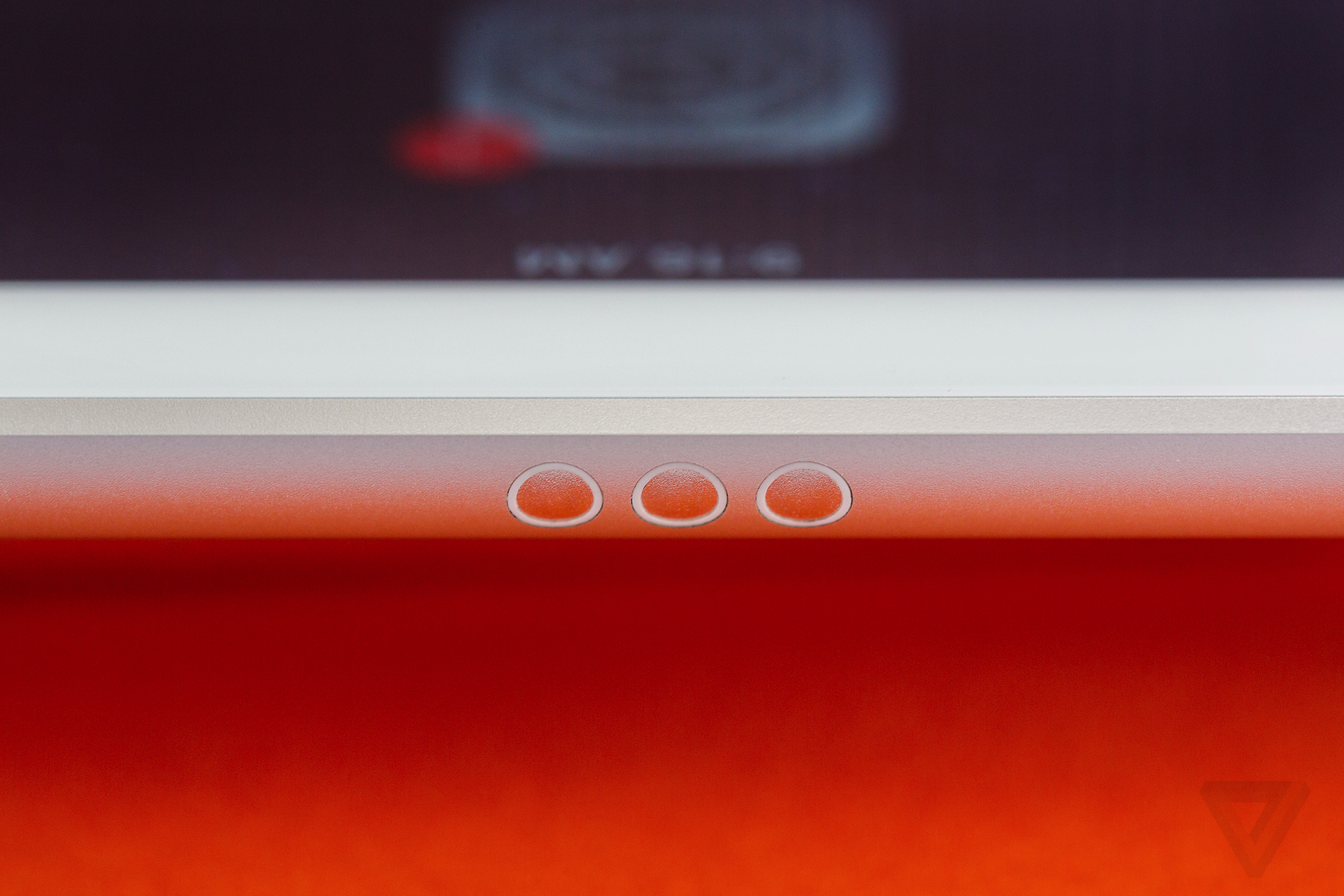 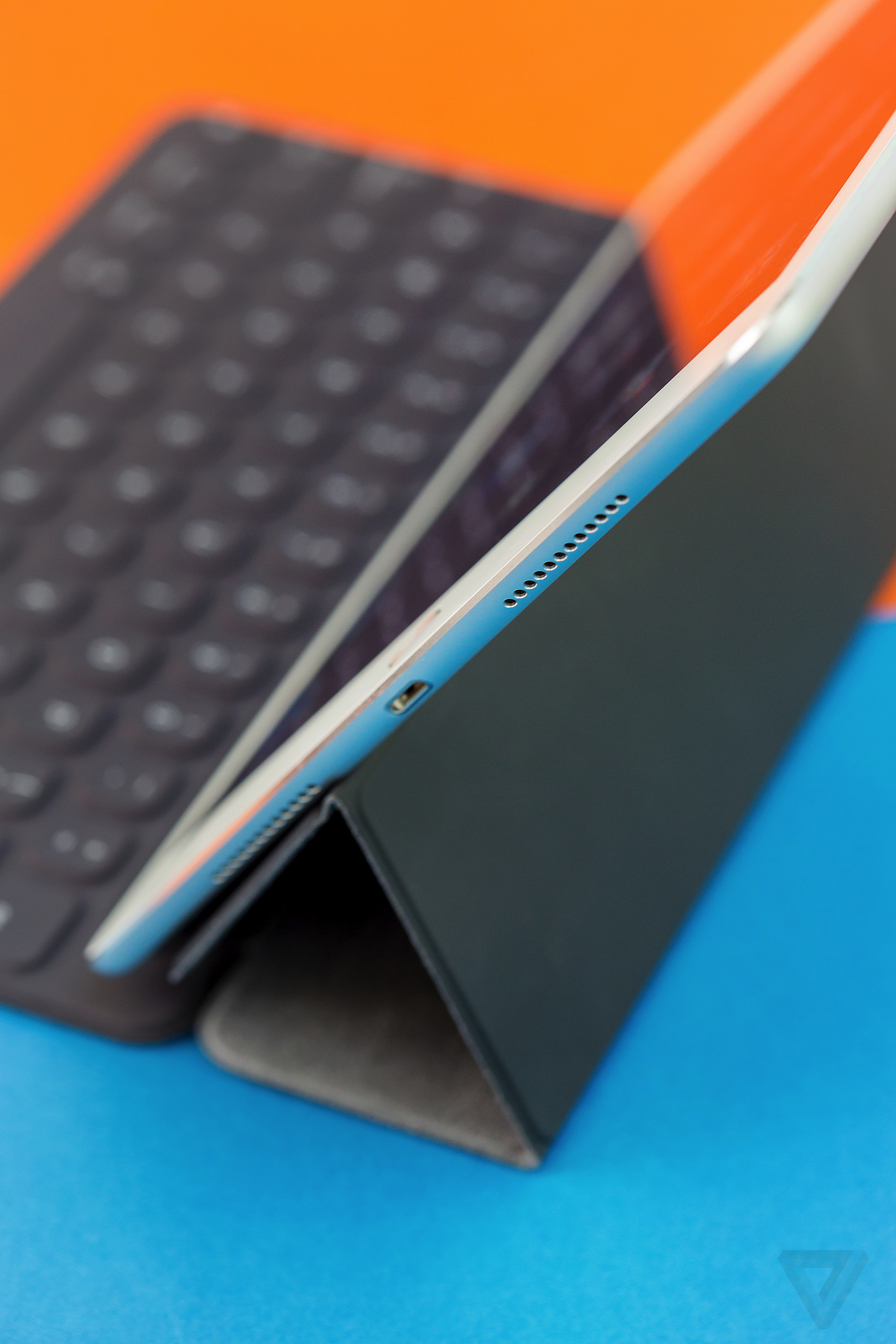 Of course, if you’re the kind of graphic designer I imagine Apple wants to cater to with the iPad Pro, you’re going to be turning True Tone off — you need accurate color representation. But for normal use, giving up a little bit of color fidelity for a nicer-looking screen is great.

I have no complaints about the performance of the iPad Pro, either. The battery is more than good enough to last a full day of work — and then some. In my tests it actually exceeded Apple’s claimed life of 10 hours. The A9X processor inside is the same as what you’ll find on the larger iPad Pro, and it flies. I don’t feel like my iPad Air 2 is slow, but the Pro is generally able to render a web page almost twice as quickly. It also has fewer of those little pauses you tend to see when you’re running split screen apps.

The hope is that this iPad should be fast enough and powerful enough to act as a stand-in for the stuff you do on your computer. But I don’t think it quite gets there. Part of it could be the 2GB of RAM, which isn’t quite enough to have a ton of Safari tabs open and be responsive while running another app alongside it. The bigger issue, though, is that iOS isn’t quite ready for my computing tasks.

Safari still feels more like a mobile browser than a desktop browser, for one thing. For another, two apps at once is great but somehow I always feel like I need one more on the screen. That’s to say nothing of the limitations that iOS still places on users and developers: you can’t pick default apps for key things like email or web browsers, you don’t have an easily accessible file system, and too many apps feel like stripped-down versions of their desktop equivalents. And sometimes, really, you just want to plug some USB thing into your computer without having to worry about adapters. 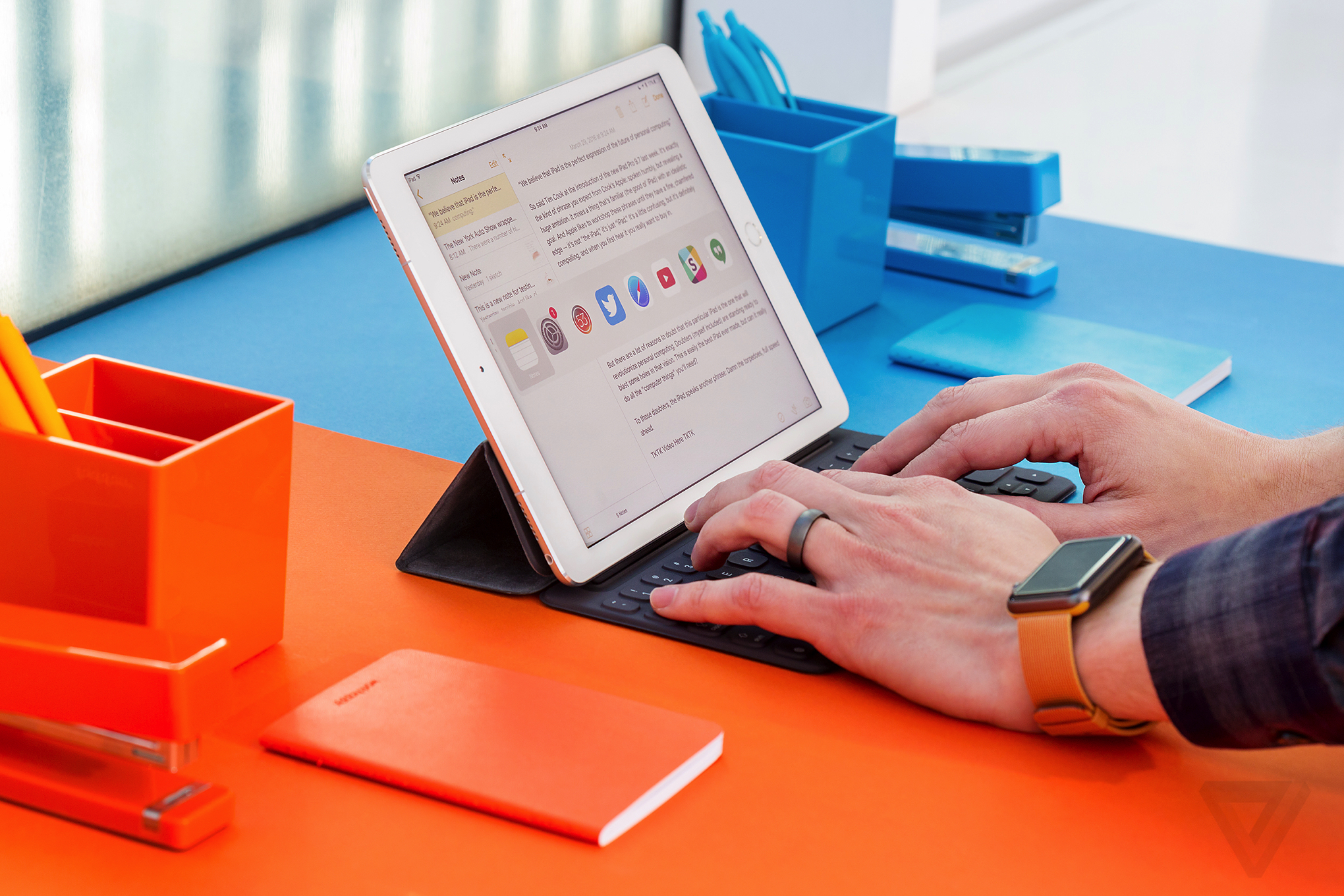 If you think of this iPad Pro as "just" an iPad, you’re going to be impressed. I’ve already enthused about the screen and the speed, but there’s more to it. The four speakers are very loud and very good — there’s not enough bass in them to replace your Bluetooth speaker, but there’s more than enough volume to make you love watching movies in bed.

The Apple Pencil is great too — it works exactly like it does on the bigger iPad Pro. I still wish that it was a little more pragmatically designed: it rolls around, you have to charge it by sticking it into the side of the iPad, and there’s no "eraser" on the top. But it’s incredibly responsive and accurate, works for shading at an angle, and is just all-around fun to use.

The Smart Keyboard is easy to type on, but not as functional as it could be 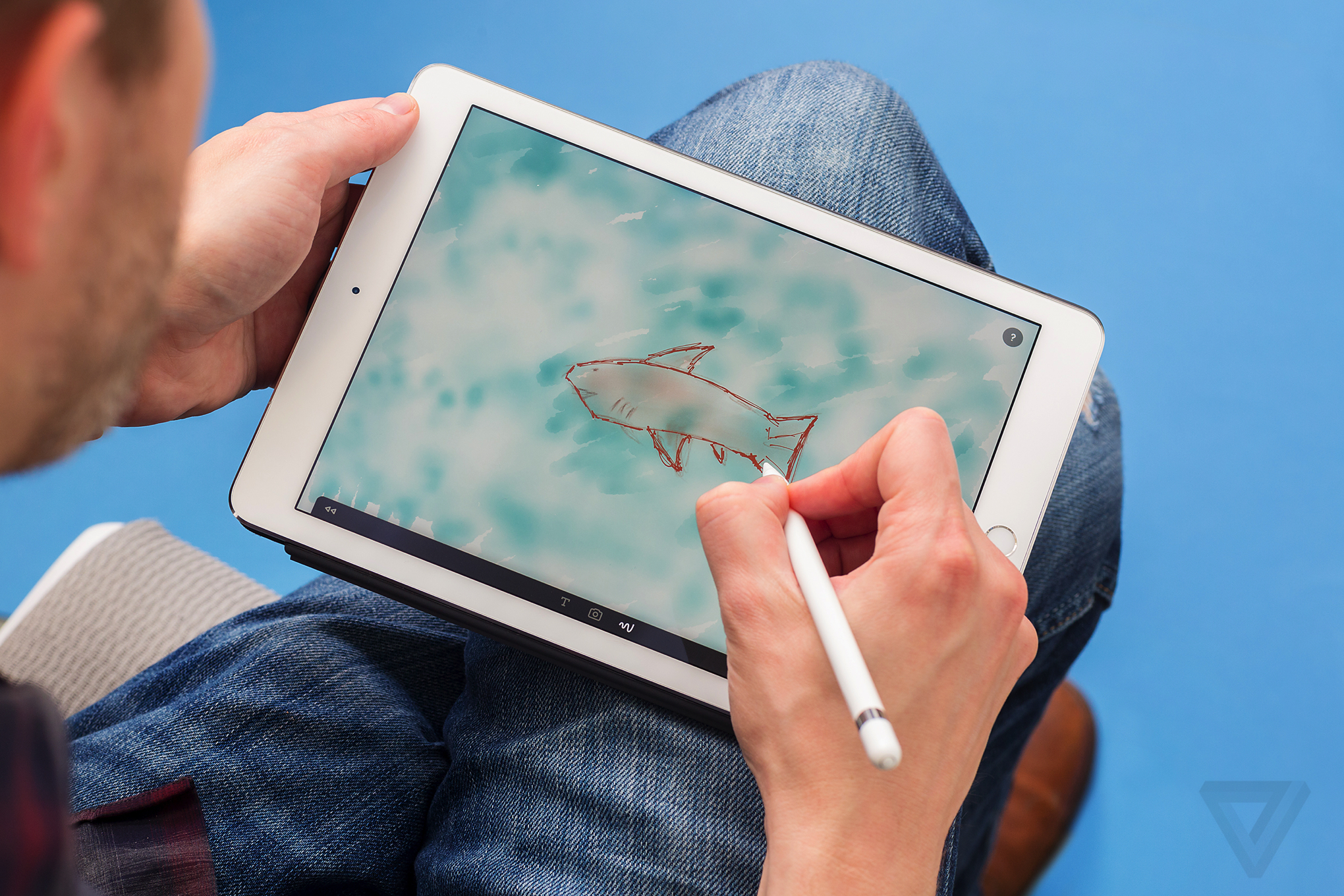 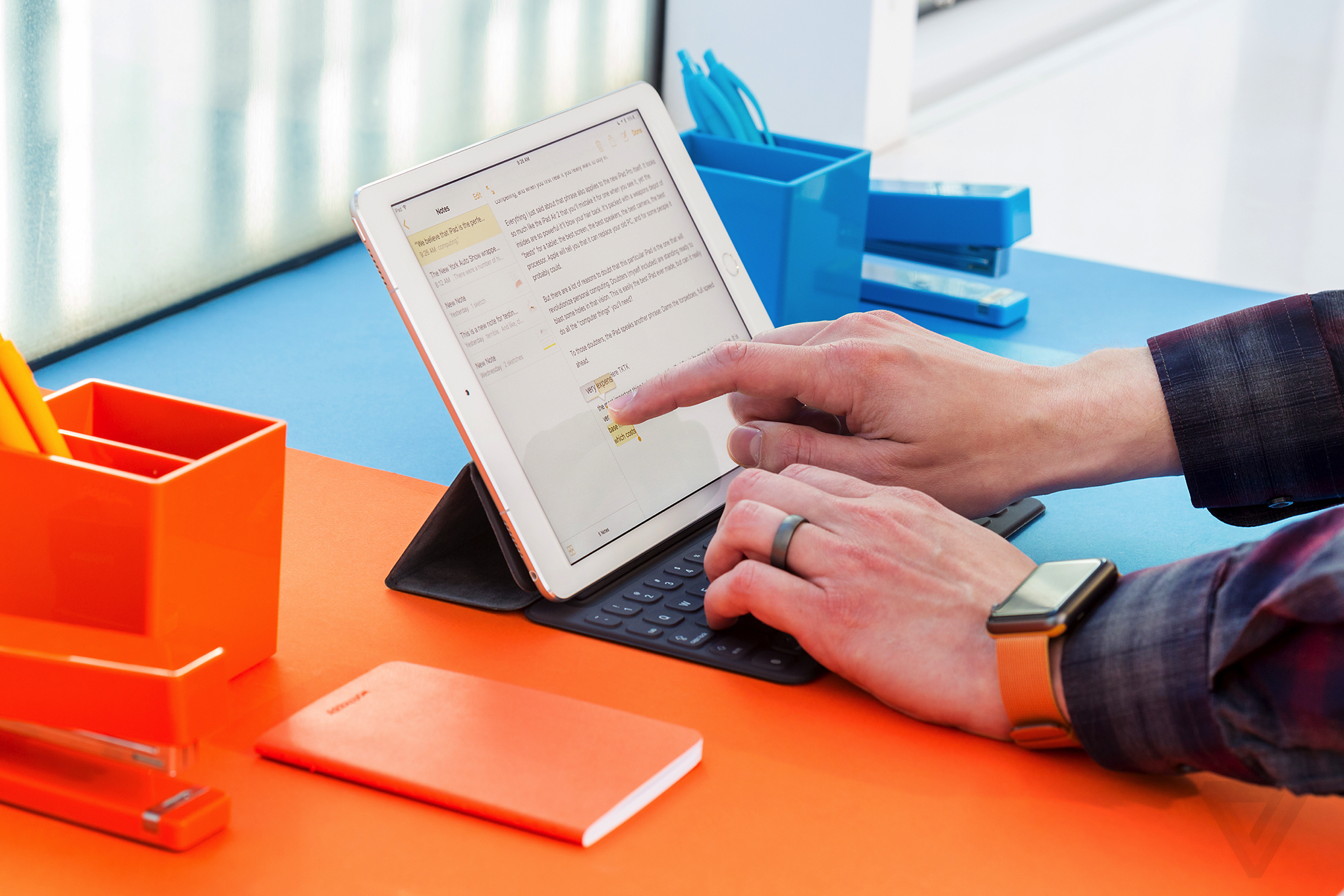 And then there’s the camera, a 12-megapixel sensor that’s the same as you’ll find on the iPhone 6s or the new iPhone SE. I confess I haven’t tried it in every single lighting condition, but in general it’s been as fast and as good as it is on those phones — which is to say it is very good. It supports Live Photos (viewable with a long press, not 3D Touch) and I’m long past griping about people using this massive screen to take photos.

It does have a camera bump, which I find aesthetically aggravating but at least it doesn’t make the iPad wobble when you set it on a table. I can’t deny that it is the best camera ever put on a tablet, but nevertheless the only thing I can say about deciding to put this much camera in a tablet is as follows: ¯\_(ツ)_/¯

I’m also of two minds about the Smart Keyboard, the $149 accessory that attaches directly to the Smart Connector on the bottom of the iPad Pro. On the one hand, I’ve never acclimated as quickly to typing on a small-sized keyboard as I did on this. Apple has done some clever things with the design to make it thin, light, and durable — there are effectively no moving parts inside it, for example, it just uses the custom fabric weave to provide feedback to your fingers. On a desk, it’s as good as typing on a 9.7-inch iPad as you’re going to get.

But while the core typing experience is great, the rest isn’t. I still find the integrated Smart Cover setup kind of fiddly, and it only works at the one, single angle — so lap typing can get a little frustrating. And other Bluetooth keyboards (and, presumably, other Smart Connector keyboards soon to come) have both backlights and specialized function keys for things like music playback and volume. So as much as I like typing on it, I think the best move is to wait and see if a better keyboard from a third-party becomes available. Looking at you, Logitech. 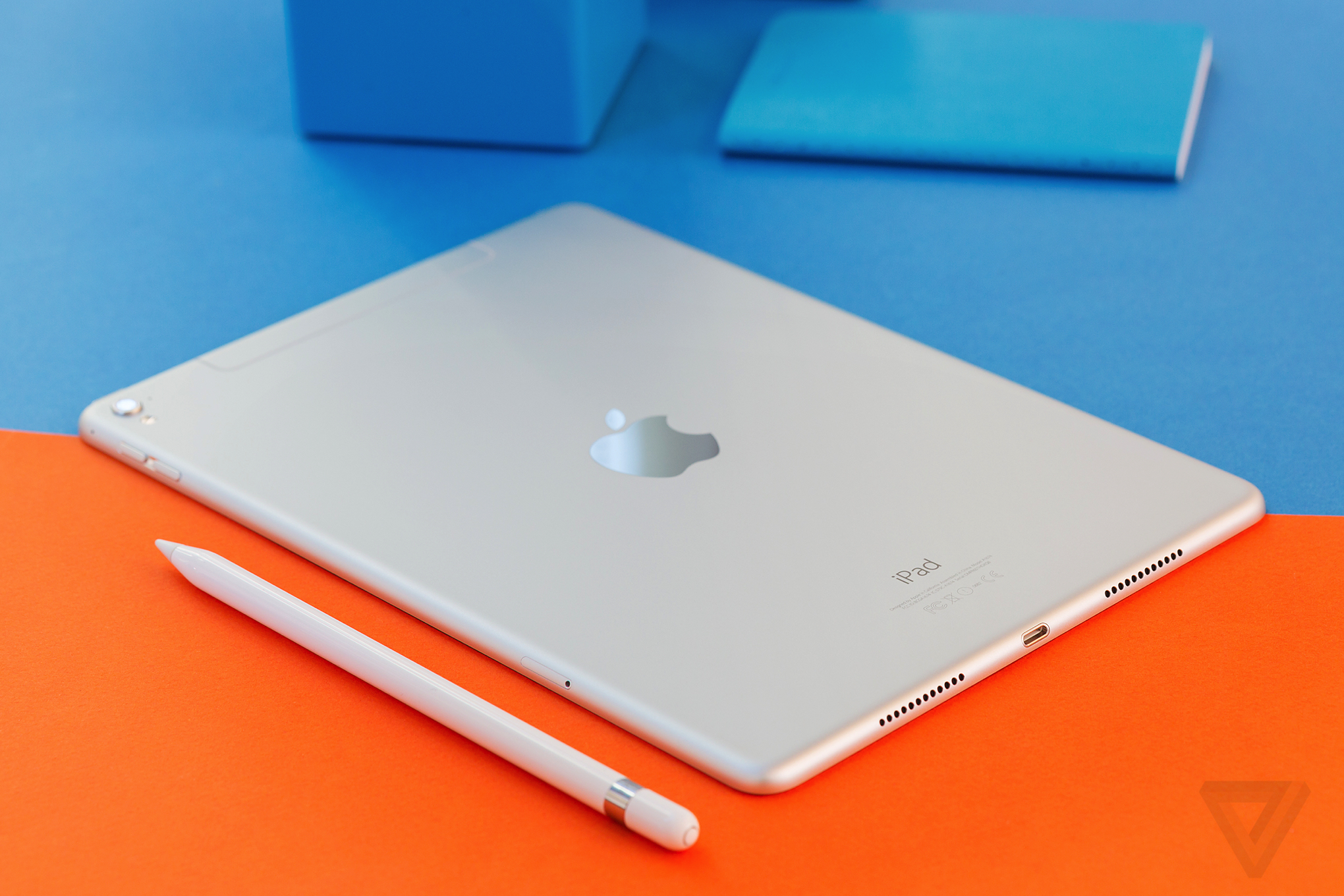 Back when Steve Jobs introduced the very first iPad, he said that it was a "third category of device … something that’s between a laptop and a smartphone." And he was right: the iPad is its own thing. It’s good at the things that Apple set out to make it good at: email, web browsing, photos, video. Since then, it’s gotten much better at the kinds of "productivity" that people used to think the iPad wasn’t good for.

Now, Apple wants to say that this third category is the next category, the thing that can replace your laptop. And the new iPad Pro is powerful enough and portable enough to make a compelling case that it could happen, someday. I don’t think it’s there yet — but it’s not because of the hardware. The hardware is stunningly, amazingly good. Instead, I just don’t think that iOS can make the case for replacing Windows or OS X.

It's a stupendous iPad, even though it's still not a laptop replacement

To parse words, Tim Cook said this iPad Pro is an "expression" of the future of computing, and the difference between "being" and "expressing" is an important distinction. There’s a world in which all those traditional computer gripes are magicked away by the cloud and software innovation, but we don’t live in that world. We live in this world, with this iPad Pro.