Spoiler warning: This article discusses some details from the big central fight in Batman v Superman: Dawn of Justice.

Here’s the dirty little not-so-secret secret behind Batman v Superman: Dawn of Justice: Batman could have won that fight in 30 seconds flat, if he wanted to. He comes in with Kryptonite gas that completely debilitates Superman, and a Kryptonite spear capable of killing him. The title of the film could have been Batman Executes Superman: Wow, That Didn’t Take Long. But once Superman is helpless, Batman is in no hurry to deliver the coup de grace. Instead, he delivers shouted lectures and an extensive beatdown that stretch the fight out until Superman recovers enough to give as good as he’s getting.

Batman has his reasons for pulling his punches: He wants Superman to suffer. He wants him to experience the weakness and desperation the people of Metropolis felt when Superman was destroying half the city in his desperate fight against Zod in Man Of Steel. Besides, a hands-on, face-to-face murder might tarnish Batman as a hero — though given the number of people he guns down or runs down in the film, his status as a cold-blooded killer doesn’t seem to have been much of a concern.

But mostly, Batman doesn't cut the battle short because the filmmakers know a brief, decisive takedown wouldn't be satisfying, or even story-worthy. People don't rush to check out a hero vs. hero battle to see how quickly or definitively one side can win. They want the drawn-out, detailed action. They want to see all the possibilities of a full-bore combat between their favorites. They want to know what their heroes can do when challenged to their fullest.

They want, in short, to feel a specific set of emotions that they don't get from the usual superhero/supervillain fights.

Given how thoroughly superheroes are associated with power fantasies about saving the day, rescuing the innocent, and triumphing over evil, it's a little funny that so many heroes' defining moments involve fighting each other. And it's telling that almost since the birth of superhero comics, America's powerhouse publishers have returned over and over to special event, hero-against-hero wars to boost sales and revive readers' personal connections with their favorite characters. DC Comics has had Batman and Superman clash dozens of times since their creation, for reasons ranging from mind control to political disagreements to villain manipulation. Over on the Marvel side, headliners have frequently attacked each other for casual reasons — as when an asshole version of Spider-Man picked a fight against the Fantastic Four in 1963 because he wasn't invited to the Human Torch's trippy teen hangout party — or because of that old standby excuse, "I mistook you for a villain." Later iterations of Marvel built huge crossovers around team vs. team combat, like the Avengers vs. X-Men saga in 2012. Occasionally, DC and Marvel even let their universes collide, just so their heroes could battle each other.

And as the Marvel Cinematic Universe has gotten more crowded, hero combat has became inevitable at the movies as well. In 2012's Avengers, Hawkeye is mind-controlled into fighting the other heroes, Iron Man and Captain America trade blows with Thor, and a raging Hulk goes after Black Widow. Ant-Man fights Falcon in Ant-Man. Iron Man takes on Hulk in Avengers: Age of Ultron. And it's all building up toward this year's Captain America: Civil War, where half the MCU will battle the other half in a titanic war.

Why are creators so addicted to hero combat that they keep letting the good guys' infighting overshadow the bad guys' scheming? The answer is another dirty little secret of superhero stories. For all the emphasis placed on villains, hero vs. hero combat is generally more exciting, for a number of reasons.

We're just plain curious who could take who in a fight. Debates over which comic characters would win in various match-ups have been around as long as comic books. How would The Human Torch and Iceman counter each other? Who's stronger, Superman or Captain Marvel? Once writers build up characters like Silver Surfer or the Hulk into unstoppable villain-defeating machines within their own dedicated comics, of course people are going to want to know which one would win a grudge match. That curiosity is often like armchair quarterbacking: we feel a possessive sense of pride in our favorite heroes, and want them to kick ass in competition, like our favorite sports teams. We want them to win, and justify our fandom. And we care because...

We spend more time with the heroes, so their conflicts seem more important. An interesting phenomenon occurs around the latter entries of long-running horror franchises: After a while, the terrifying central villains become anti-heroes, and the audience starts to cheer for them. The kids Jason or Freddy kill off start to feel disposable, while the villains feel like old friends. It's just a question of exposure: just spending time with characters makes them feel familiar and comforting. Villains in superhero comics come and go every month, and even the best-known ones never have the same weight as the heroes whose lives take center stage in every issue. We identify with our favorites, getting a frisson of pleasure from their perseverance against tall odds and difficult antagonists. So when Spider-Man turns up in the Civil War trailer, he feels like a substantial, thrilling addition to the story, a more promising and meaningful one than any given villain. We wonder how he'll stack up to the characters we've already seen fight each other. But we also wonder how he'll feel about this huge hero-on-hero battle, because…

We identify with heroes as if they were sports teams 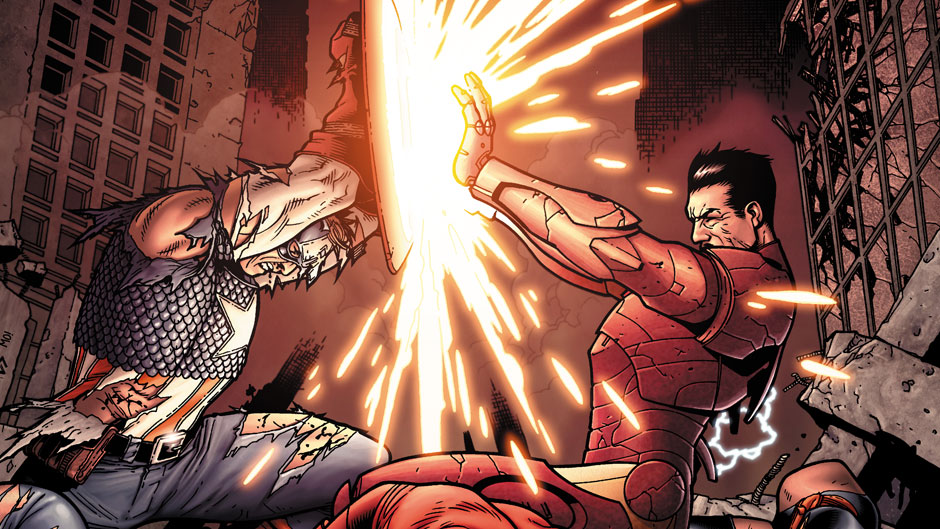 We empathize with our heroes' emotions when they're forced into fights that trouble them. In an intra-hero battle, we're meant to empathize with characters who are forced to go up against friends. Half the emotion coming from the Captain America: Civil War trailers is the angst and hurt of people who feel betrayed by their friends and former teammates. When Robin and the rest of The Team in Young Justice have to fight Batman and the rest of their mind-controlled mentors, they're terrified of being overmatched, but also of harming the people they care about most. Batman may not feel any regret over taking down Superman in Batman v Superman, or in Frank Miller's The Dark Knight Returns, but he does in other, earlier stories, where they are comrades and longtime partners and friends. There's an extra level of emotion in hero fights, which often come with regret, reluctance, or righteous rage that conflicts with our excitement at the action. And all those internal conflicts — in the participants and in the viewers — just make the experience richer. On top of that…

Hero fights have more constraints than hero/villain fights, so they have to get creative. Look at that Ant-Man vs. Falcon fight in Ant-Man. The writers had to deal with a lot more limitations than they would have been if Ant-Man was taking on a subsidiary villain, whom they could sidestep, humiliate, or even kill. Instead, they had to showcase both heroes' powers, make them both look cool and capable, let them both walk away confidently, and still let Ant-Man successfully hijack the tech he was trying to steal. He had to win without being too cocky and coming across as unlikable, or being too aggressive and coming across as a bad guy, or being ashamed of his goals and coming across as a tepid hero. That's a major writing challenge that can't be solved by "he punches it harder." The solution for writers is often more creative uses of powers, the environment, psychology, or outside forces to make sure both heroes represent themselves well, and save face at the end. But at the same time… 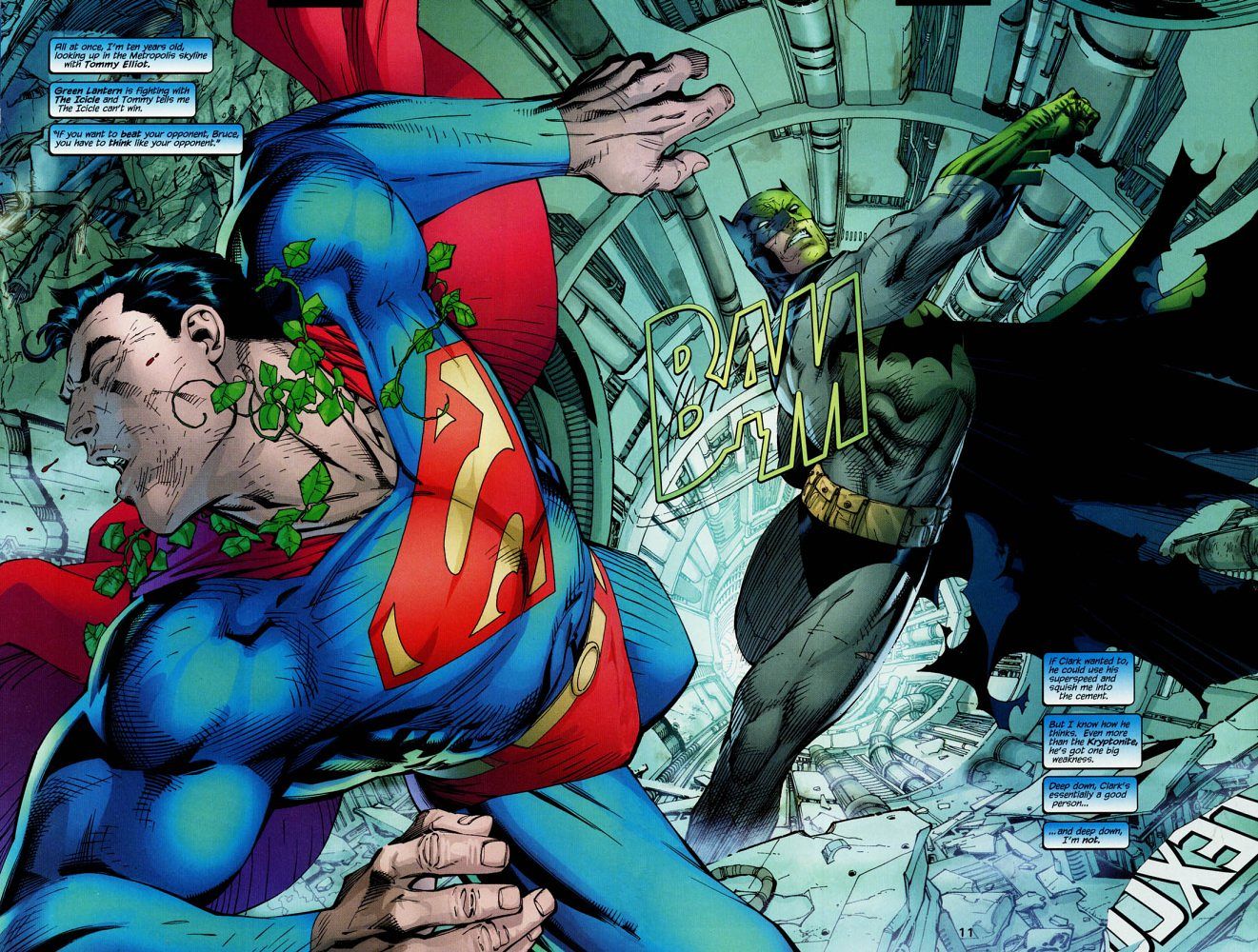 Heroes usually don't lose. They face setbacks, they get captured, they fail temporarily and wallow in painful emotions, but then they get up again and fight and win. That makes fights against villains predictable: Except in the most nihilistic stories, good is eventually going to triumph over evil. But fights with other heroes who also have unbroken track records of defeating villains are a different story. Two heroes clashing can seem like an irresistible force meeting an immovable object, which makes the outcome at least feel unpredictable. We know DC's biggest names aren't going to murder each other outright in Batman v Superman. Neither are Iron Man and Captain America in Civil War. So every hero battle carries the same questions: "How are the writers going to get out of this one without selling the characters short, or undermining them? How bad is it going to get? Who's actually going to win?"

But that last question leads to the major downside of hero fights: few of them end definitively. The need for every hero to walk away largely unscathed, and capable of going back to their own stories, can force creativity. But it also means any given fight will usually end in a stalemate, a compromise, or a left-field revelation, like the awkward one that shuts down the big mano-a-mano in Batman v Superman. There isn't any catharsis in a fight that just trails off. In the MCU movies especially, the most dramatic result is generally that everyone walks away a little sore and chastened, with more respect for their allies' abilities.

And that's yet another dirty secret of hero fights: the anticipation is often more fun than the actual event. The idea of our heroes fighting sparks our imaginations, our rooting interests, and our emotional investment. But because we're so pre-invested in the characters and the outcomes, the reality can be disappointing. Batman v Superman prepped fans for an epic showdown between familiar titans, then gave them warped versions of the characters — Gun-Wielding Torture Batman vs. SuperMopeyMan — making bush-league mistakes in battle. Civil War seems more promising, but with so many heroes involved, and new ones to introduce, it certainly has its work cut out for it. The idea of an entire film where the villains are just other heroes is a brilliant marketing move, but it seems designed to test the limits of this particular plot structure.

And once both films have come and gone, and DC has moved on to Wonder Woman, Aquaman, and the Justice League movies, while Marvel builds up for Doctor Strange, Black Panther, Guardians Of The Galaxy 2, and the Infinity War films, it's likely that we'll go back to more conventional good-guy vs. bad-guy conflict for a while. Maybe after so many hero wars, that traditional model will start to look like a novelty again. If it doesn't, the studios can always try the other big gimmick that's always sold comics: heroes forced to team up with villains. If Suicide Squad proves as popular in release as it has been in the early PR stages, it may well make villain-centric films the superhero fad du jour. In that case, you can expect Batman + Joker vs. Superman + Luthor to hit theaters sometime around 2022.