I built a Ferrari F40 Lego set, and no, I will not apologize

I built a Ferrari F40 Lego set, and no, I will not apologize

Three weeks ago, I walked into the always-crowded Lego Store straddling Manhattan's Madison Square Park. I was alone and I was on a mission, so I sort of chameleoned into "dad casually shopping for his young child's birthday" mode. It was a misguided effort to blend in amongst the tourist families with their excitable toddlers, pointing in awe at the colorful, oversized Duplo sets and the giant Lego dragon mounted on the wall.

I wasn't shopping for my child. I don't have a child. I was there, sheepishly, to buy a Ferrari F40 Lego set for myself.

The first production car to reach 200 miles per hour and the very last vehicle to be personally blessed by company founder Enzo Ferrari, the rosso corsa F40 colored my entire childhood. It was mythical to me in a way that no other manmade object has been since, and probably never will be again. To this day, when I close my eyes and picture a "supercar," it's the F40 I see. It's a timeless expression of design and engineering that, somehow, despite nearly 30 intervening years of transformative advancements in automotive technology, is just as much a supercar today as it was in 1987. For people of a certain age and a certain bent, the F40 is basically God, reflected in four wheels and 471 terrifying pre-traction-control-era horsepower.

For people of a certain age and a certain bent, the F40 is basically God

I lack the poetry to fully express my attachment to this car, but the important thing to know here is that I gesticulate wildly and expressively while talking about it. Also, I'll never have even a shadow of a chance to own one.

In lieu of the real thing, I think that I've always subconsciously on the hunt for age-appropriate F40 memorabilia. Recently, I learned of the new F40 Lego set, which retails for $99.99, or roughly $399,900.01 less than the F40's original sticker price. It's a member of Lego's Creator series, which is a little more complex, more detailed, and more grown-up than the average Lego set. This particular one is marked "for ages 14-plus," and the open-ended "plus" gave me hope that it was okay for me to take an interest in it.

Still, there is a certain mental complex that comes with buying toys as an adult, regardless of how close you convince yourself you are to the intended age range. Playtime is over, right? You should be doing adult things, and here you are buying a toy with no function other than to idly amuse someone with 20 years' less emotional development than you.

I swallowed my pride, hid behind my faux "shopping dad" veneer, and bought the set. 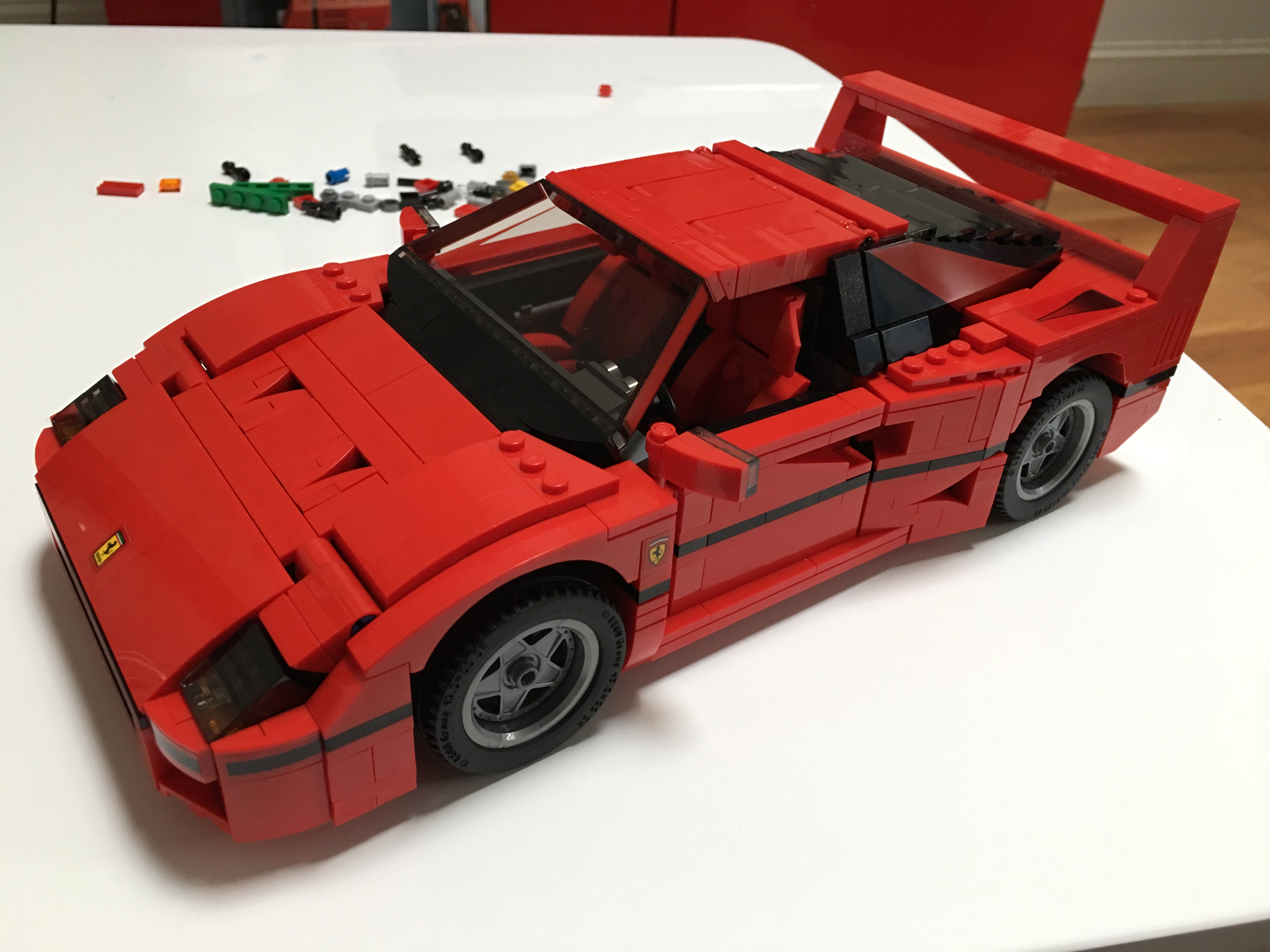 Many hours of manual labor later, the completed project.

What followed was a whirlwind that I only barely remember. I sat on the floor beside my coffee table, tearing through the thick, glossy, satisfyingly high-quality instruction manual for hours on end. I lost my entire Saturday as the 1,158 pieces, some barely bigger than the head of a nail, slowly turned into a low-res analog of my childhood automotive fantasy.

And at the end of it, I had a rolling F40, a memento that I'll probably have for the rest of my life. What began as a misguided waste of $100 on a dumb toy intended for a 14-year-old turned into an entire afternoon and evening of therapy: it turns out there's something deeply satisfying in the simplicity of following beautiful, instructive illustrations in service of building a silly little object that makes you smile. And an F40, no matter how blocky and awkward, will always make me smile.

I don't think there's some grand life lesson to be learned from my experience, but I can say definitively that this is the last time I'll be feeling weird about buying myself a toy — especially when there's a cool car involved. I have to get ready for this upcoming camouflaged Porsche 911 Lego Technic set, after all.