The Division is an upcoming shooter that takes place in a near-future version of New York City that’s become overrun by chaos in the wake of a global pandemic. But even though the fictionalized version of the city is in complete disarray, more dangerous (and somehow dirtier) than the real thing, it still feels like New York — uncannily so for some residents. Much of what makes it seem like a real place comes down to the tiny details, like the graffiti on the walls and the advertisements on billboards.

They’re things you might not even notice while you’re dodging bullets, but the developers at Swedish studio Massive Entertainment put a surprising amount of work into them. The Division features 230 different fictional ads — covering everything from fake coffee shops to a basketball team that plays at Madison Square Garden and isn’t called the Knicks — and 320 distinct pieces of graffiti. All told, publisher Ubisoft says more than 1,000 hours were spent crafting these pieces that most players might not even notice. In fact, if they don’t stick out, that’s kind of the point.

“It means we did a good job,” says lead environment artist Benedikt Podlesnigg. “It means that everything feels natural in a way, so people just expect it to be like it is.”

When it comes to the graffiti in particular, Massive worked with real street artists not only to design pieces for the game, but also help determine where they should be placed. The studio partnered with art collective Monorex to work with a range of street artists, including Swedish / Brazilian painter Limpo, whom they interviewed to learn more about the process. "Having conversations with people who know about these things also helped a lot," says Podlesnigg. "In a lot of cases you’ll see paint buckets or spray cans next to the pieces, or you’ll see scissor lifts and ladders being used to create the pieces in the world." The graffiti featured in the game was created by a combination of outside street artists and concept artists at Massive.

Graffiti is a pretty common tool in video games. Often it’s used to convey a message; an area full of enemies might feature "keep out!" spray painted on a wall, for instance. A lot of the time this comes off as distracting, as if the art is part of the game’s design, not an organic piece of the world itself. "We wanted to have more focus on realistic graffiti," says senior texture artist Joakim Månsson, "and less focus on the need to constantly pepper the gamers with simple messages to say something about the city that the visual state of world should already tell."

"We wanted to have more focus on realistic graffiti."

Aside from the art’s appearance, one of the ways the artists are able to make it feel authentic and integrated into the world is by putting it in the right place. "You’ll rarely find any complex artwork in shady back alleys. Usually they are placed where people would be able to see them," says Podlesnigg. "Back alleys would be more covered with random tags than complex graffiti pieces." The larger pieces are all distinct — you won’t see the same one twice — though smaller tags and stickers do repeat themselves.

While the team spent a lot of time looking at the history of American graffiti, travelling to New York and Detroit to see what things look like now and gather reference material, one of the goals was also to convey the deteriorated state of the city depicted in the game. "The artists we worked with got the background and story of the game and we pretty much asked them to do a piece they would do in that scenario," explains Månsson. "We also asked them where they would paint their piece if the system broke down."

Even though the graffiti is meant to blend into the world around it, to serve as another detail that helps create the atmosphere, it also has a gameplay purpose. Because each major piece is different, with distinct styles from a variety of artists, they can help players navigate the grimy streets of post-pandemic New York. "Unique pieces can create a sense of guidance or location marker in the game," says Månsson, "just as a landmark building would." You can also identify different areas by the tags painted on the walls; rioters might use a particular color, while the escaped convicts from Rikers Island use another. 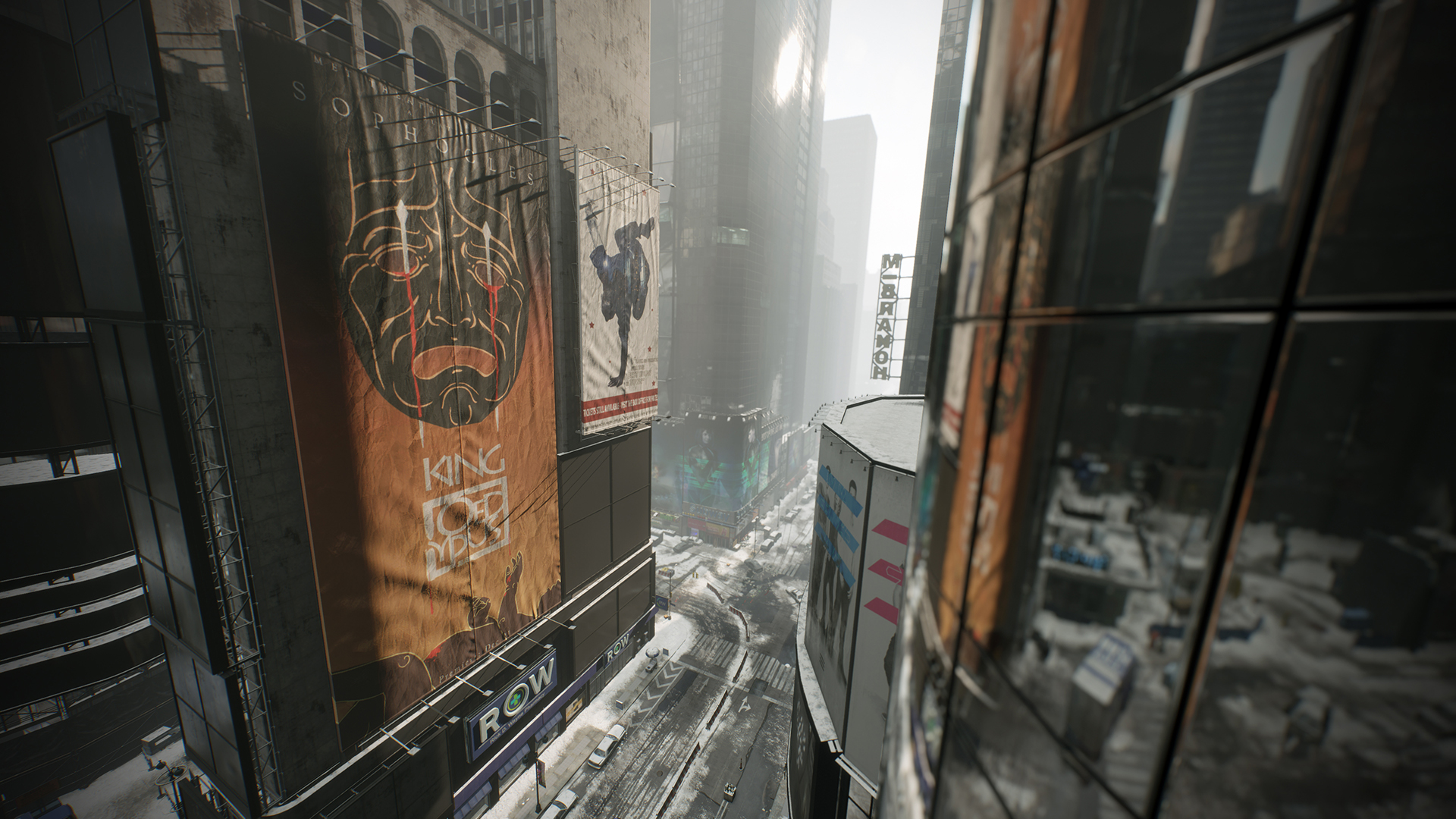 Most of these same rules apply when it came to creating the fake advertisements featured in the game. Instead of billboards for Coca-Cola and bus shelters with Nike plastered on the side, the artists at Massive developed their own fictional brands to populate the streets of The Division’s New York. There are fast-food joints (Koby’s), coffee houses (Kerman), and even high-end fashion brands (Meret and Guy Neith). Having that range and variety was important for making the companies seem believable. "Usually with other games with in-game advertising, there’s an overall art direction that’s consistent; you can almost tell it was produced by the same artist / team," explains Amr Din, authenticity coordinator for visual identity and art at Ubisoft. "We wanted to do the opposite of that."

"Working so long with these it’s hard to imagine them not being real places."

Just like with graffiti, that authenticity for the brands comes both from how the art looks and also from where you find it. In busy downtown areas you’ll see ads for fast food restaurants and blockbuster movies, while in the areas found closer to the shore you’ll stumble across posters advertising for storage companies and car mechanics. Move to the fashion district and the brands become much more high-end. This helps give each area its own feel.

Creating a fictional brand is more than just coming up with a clever logo, though. The Division is a large, open-world game, so as you explore you’ll see brands in multiple contexts. You might walk past an ad for a department store in one area and then later come across the store itself. All of these elements need to work together, from the signage to the interior design of the store, which means that the brands need to be fully thought out. "There’s a criteria to bear in mind with branding: Who is the end user? What is the product? How much money does this company have?" says Din. Podlesnigg adds that "All of this will make a brand seem real. Keeping consistency in the details across all the usage of one brand will make it feel alive in a sense. I can see myself eating at Koby’s and going for a coffee at Kerman after. Working so long with these it’s hard to imagine them not being real places."

In some ways these elements are designed to fade into the background, small details meant to add an extra layer of realism. But that’s not always the case; sometimes the ads need to be loud. "In true NYC style, it should be sort of in your face," says Din. "There are some advertisements you cannot ignore due to their placement. We’ve had world artists place advertisements in specific areas to create a scene, tell a story, or contrast the state of the world in a sort of grim sarcastic irony."

It may seem like an unnecessary amount of work for a game that’s ostensibly about shooting other people in the head, but for the artists at Massive and Ubisoft, these seemingly small details are all contributing to a larger goal. Working in tandem with the level design, narrative, architecture, and other aspects of The Division, the ads and graffiti are able to help tell the story of a place in a way that feels organic. They’re the supporting cast; you might not notice them when they work, but if something feels off, you’ll see it right away.

"We can build the most realistic city possible," says Podlesnigg, "but if the advertising feels fake it can destroy the whole illusion of a real place."

The Division launches March 8th on Xbox One, PS4, and PC.