The most mini of mini PCs

Why wouldn’t you want an entire Windows computer on a tiny little stick? As someone who uses a MacBook day in and day out, the idea of $159 Intel’s Compute Stick, a Windows 10 PC shrunken down to the size of a tiny plastic rectangle, really pulls me in. Take it anywhere, plug it into an HDMI slot, and it turns nearly any TV or other display into a Windows machine. You supply your own mouse, keyboard, and display — just like any other mini PC. But this is the most “mini” PC I’ve come across.

I’ve used it at the office. I’ve used it in my living room. I’d have no problems using it at a hotel. I’ve streamed Xbox games on it. And despite some clear limits with the hardware, I’ve found myself hooked. I love this tiny little underpowered computer.

The Compute Stick by no means the first of its kind; the PC-on-a-stick concept is slowly gaining steam. Asus’ Chromebit, for example, puts Google’s web-centric operating system in a similar form factor. But the Compute Stick is full-on Windows 10. It runs all the Windows apps you’d expect — to varying degrees of success. You’d be silly to expect this experience to rival that of an expensive (or even mid-range) desktop PC. It takes almost no effort at all to push up against its limits, grinding the whole computer to a crawl. But over the last couple weeks, I’ve realized something: that’s perfectly okay. I’d never use this as my one and only computer, but carrying around this wonderfully nerdy PC stick in my bag has let me do things that I wouldn’t have been able to do without it. 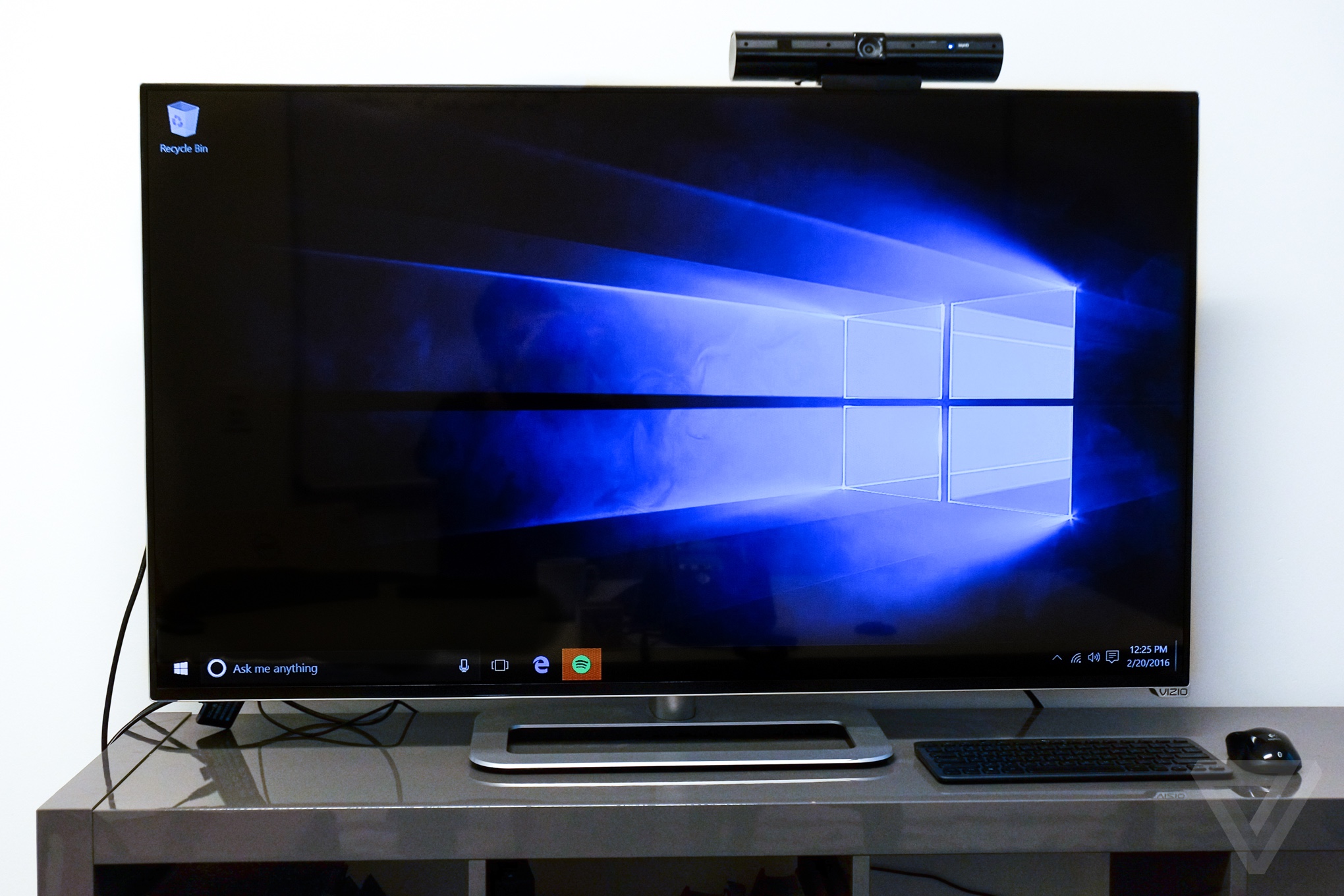 In terms of design, the Intel Compute Stick looks about as simple and plain (read: boring) as its name suggests. Most of it is matte black, with a glossy section on the lower half that showcases Intel’s logo. There are two USB ports (an improvement over the lone input of the first model) and this time one of them is USB 3.0. There’s also a microSD slot (up to 128GB), so Intel has designed the Compute Stick with two features that should help alleviate constraints around the 32GB of built-in storage.

And to be clear, shipping any PC — even one this tiny — with only 32GB of built-in storage is just plain dumb. That’s not enough space for everything on my phone, so trying to make it work on a PC is pretty hopeless — especially once you install a big Windows update or two. Even with two options for added storage, Intel loses some points here; 64GB should be the floor for this kind of thing. 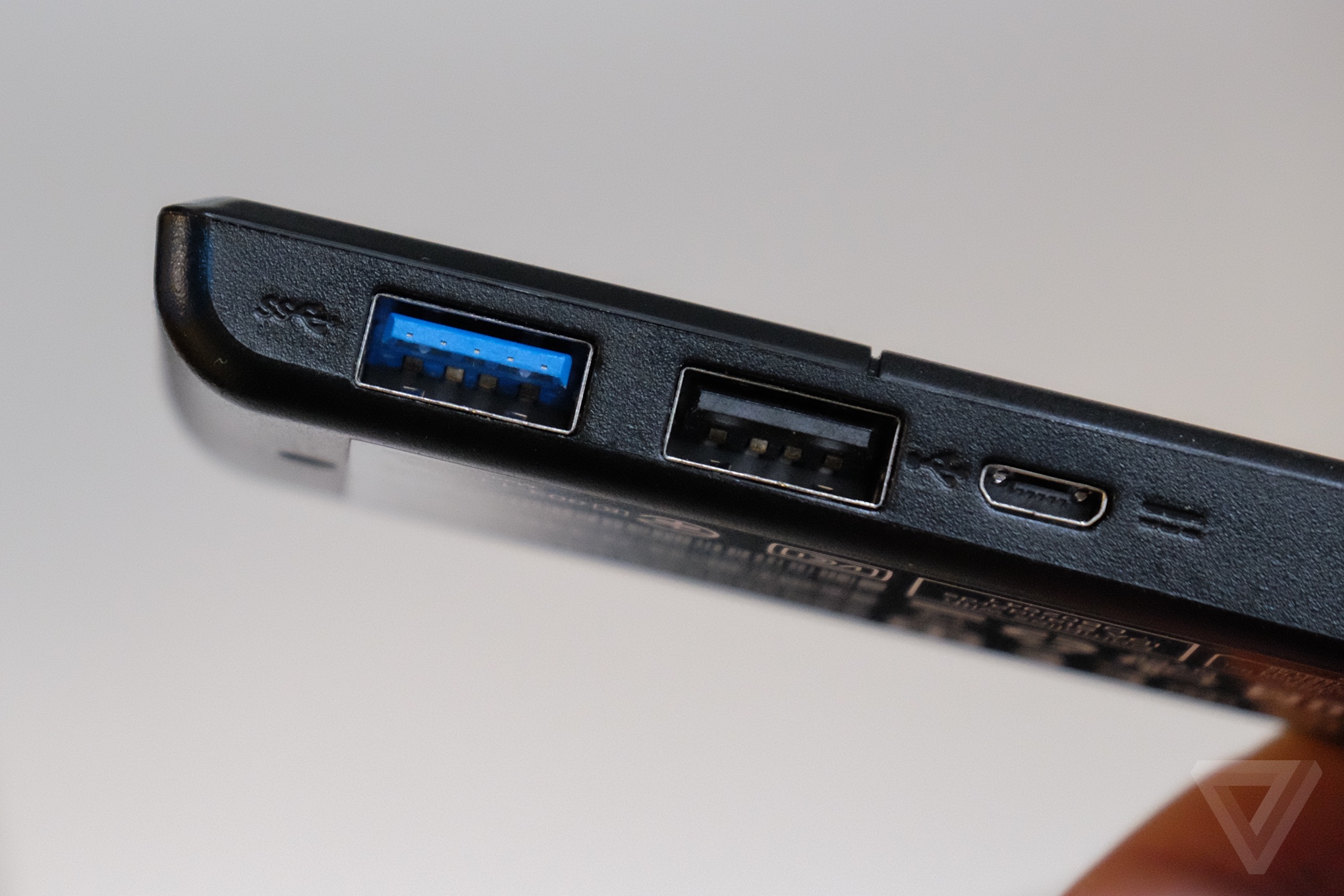 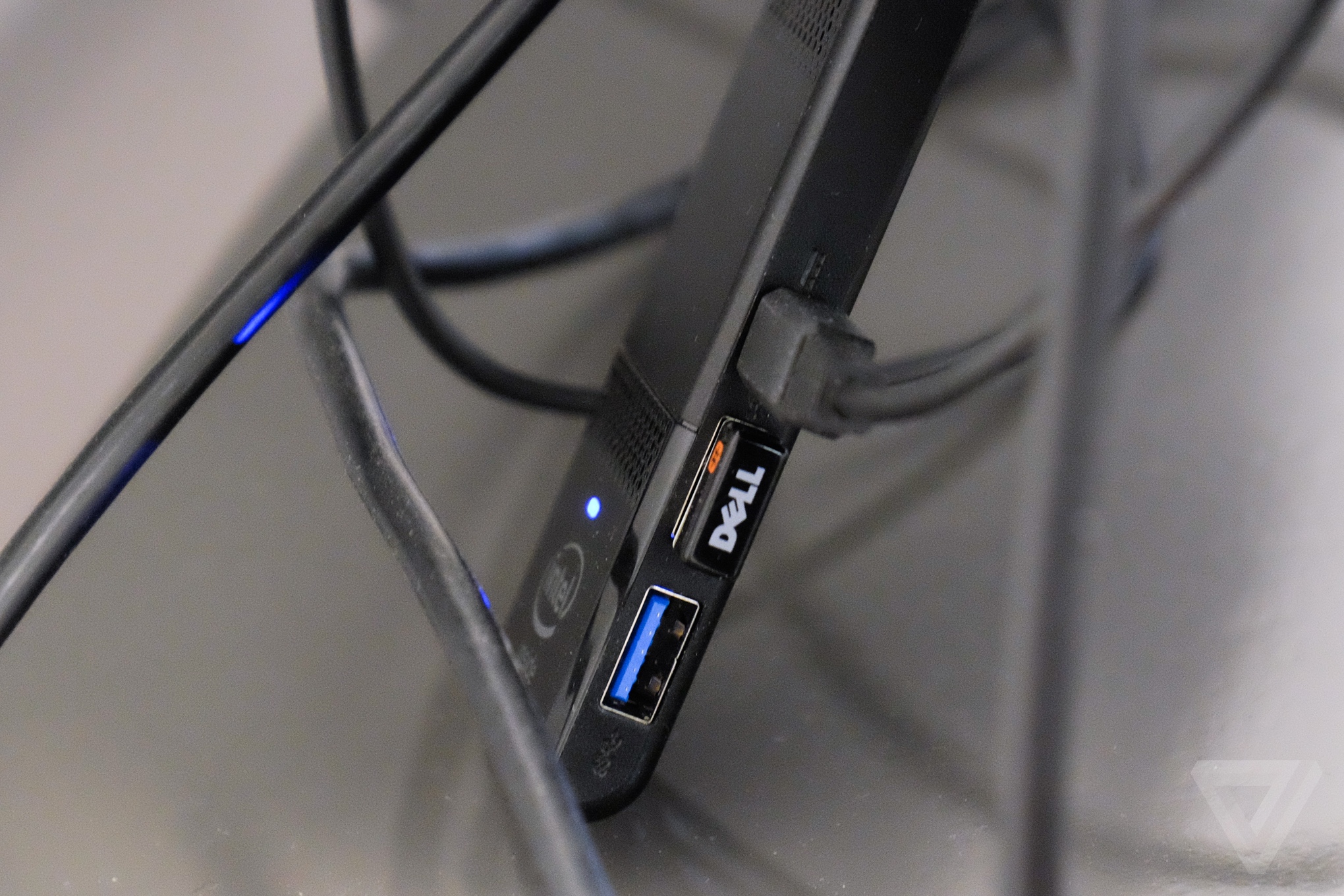 On the opposite side of the USB ports is a microUSB jack, which is where you plug in the Compute Stick’s charger. Unfortunately, the USB ports found on most TVs won’t provide enough power for the device to operate properly; you’ll have to use the charging cable. Intel includes an HDMI extension adapter in case the Compute Stick isn’t the best fit for whichever slot is free.

The cable situation can get pretty messy once you plug in the extender plus an external hard drive or a wired keyboard and mouse. And you might actually find yourself doing the latter; Windows still doesn’t support Bluetooth peripherals during the setup process, so you’ll either need wired devices or one of those wireless keyboard / mouse combos with a tiny USB plug. Once you’re set up and booted into Windows, you can switch over to Bluetooth accessories and free up those USB ports. Intel offers an Android amd iOS app that you can use to navigate around Windows, but I’d only recommend using that in a pinch — or if you’re running a Powerpoint presentation or something.

The Compute Stick can handle many everyday PC tasks without any major problems or headaches. Whether that’s web browsing, listening to Spotify, editing Office documents, watching YouTube or Netflix, or even light gaming (think TowerFall), you’ll be just fine. If you try and do too much multitasking at once, things’ll get sluggish and you’ll feel the constraints of the 2GB of RAM. And the Compute Stick doesn’t officially support 4K either, another clear handcuff of the Atom CPU it’s got inside. You’ll have to buy one of the more expensive, Core M models coming later this year for that. For right now, it’s best paired with a 1080p display.

On the gaming side, you can stream games from your Xbox One to the Compute Stick that Intel’s gadget could never dream of playing on its own. So that’s pretty cool, and it actually works well; I noticed some latency here and there, but Xbox games were never unplayable. In fact, it’s a pretty convenient (and cheap) way of streaming Xbox in another room of your house without buying a second console — or more expensive PC. The improved Wi-Fi (now 802.11ac) makes a huge difference here, just as it does for Netflix and other apps that lean heavily on your broadband connection. The Compute Stick is a fine streaming device, which could help some people overlook its weaker points. Google’s Chromecast and Amazon’s Fire TV Stick are far easier streaming products, but they can’t do quite as much. 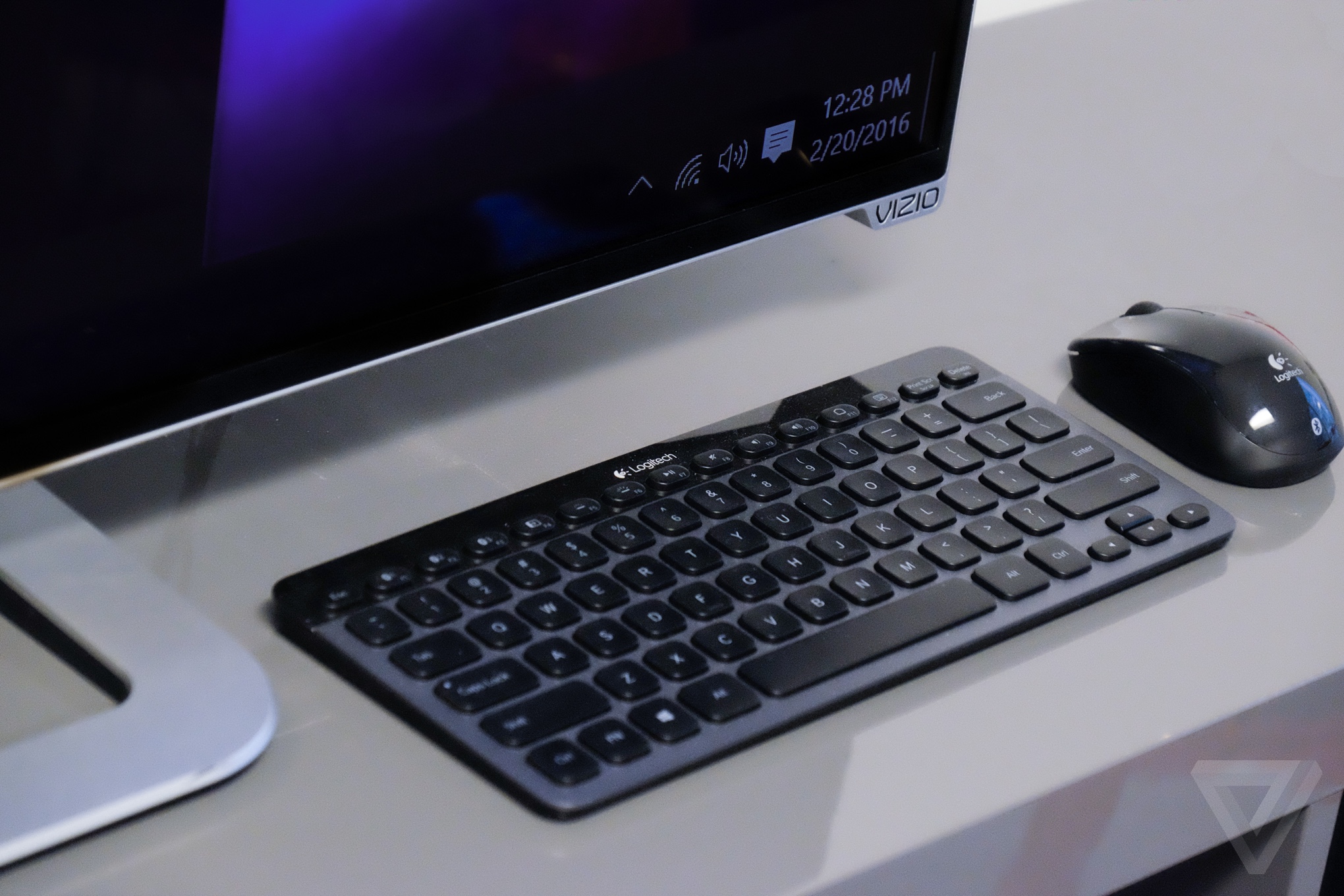 Most of the time, the Compute Stick feels like any other PC, which is the most important thing, and it's got a way of disappearing behind your TV, monitor, or whatever screen it’s plugged into. The more and more I use it, I think this could be a handy thing for a lot of people. You could plug it into the hotel TV when traveling, or carry around secure documents on the Stick itself without leaving your laptop somewhere. You’ve got to stay realistic, though; the Compute Stick is way too limited to replace my MacBook Pro, and the $35 Chromecast remains an easier-to-use streaming device.

But for $159, Intel’s Compute Stick is a pretty neat gadget to carry around with you, even if it’s not something you’ll plug in every day. This is computing in its most minimal form, and even if it’s not always the most practical, it’s earned a permanent spot in my bag. If you can’t stand the obvious hardware limits, know that there are faster and more capable options coming — from Intel itself and other companies. But even this version of the Compute Stick is a fun little gadget; it's Windows 10 that fits in your hand and can go anywhere.