April Fools' pranks from across the internet, ranked from best to worst

April Fools' pranks from across the internet, ranked from best to worst

I love April Fools' Day. I agree the annual day of pranks and goofs has become a shallow excuse for brands to cloyingly plea for our attention, but sometimes that desperation can transcend into genuine humor. You get the sense, on April Fools' Day, that a certain set of people really love their job.

I imagine April Fools' Day is like a pagan festival for publicists, copywriters, and junior marketing directors, who on the first of April get to ignore their bosses and put that MBA in Creative Writing to good use. "Look," says the April Fools' gag, fretted over by a billion dollar publicly traded entity, "we can have fun, too!"

And the April Fools' publicity stunt works. We know the whoopee cushion is on our metaphorical office chair, and yet we sit nonetheless. April Fools' Day brand activations have become so powerful that real announcements will be mistaken for lame gags simply because of their vicinity in time. Pepsi 1893? That can't be a thing! And yet, it is. It really is.

In an effort to maintain my optimism on this unholy holiday, I've ranked the internet's April Fools' pranks from best to worst. Feel free to lend a hand in the comments. 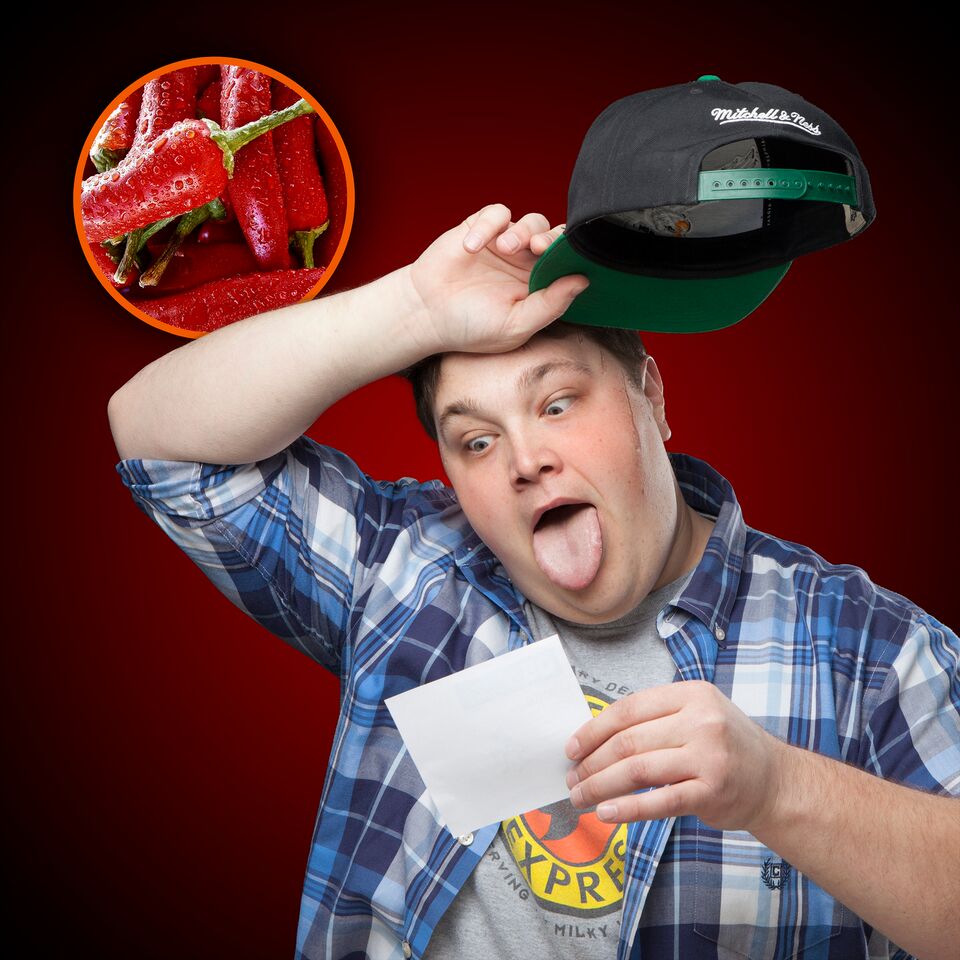 This is the danger of a good April Fools' joke: I'm now disappointed Dark Souls 3: The Movie isn't a real thing. I would like this now, please. A copy of Dark Souls 3 is also an acceptable gift. 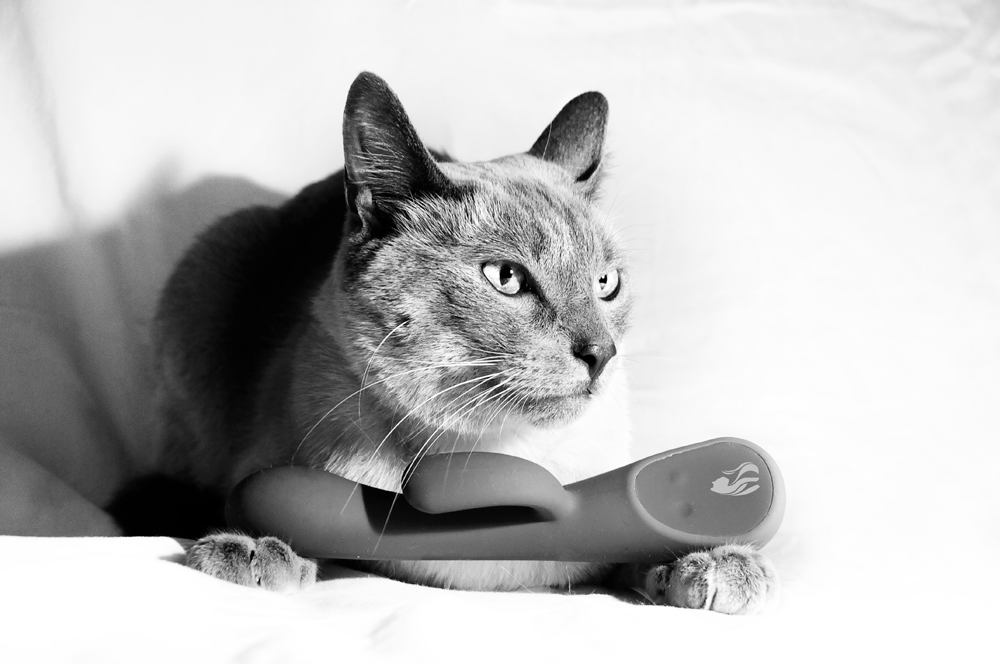 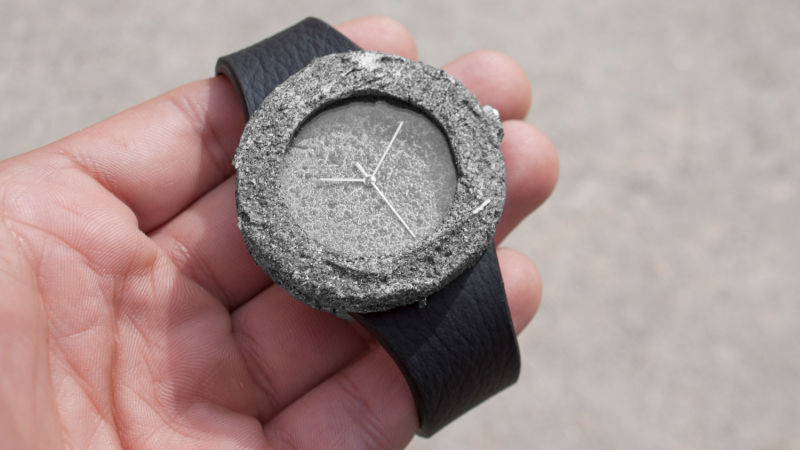 To crush the will of internet writers across the globe, the Moon Watch was announced yesterday — which was not April Fools' Day. As Gizmodo noted at the time, "what justifies its $27,500 price tag is a housing made from a solid piece of 4.5-billion-year-old moon rock, collected from our lunar neighbor back in 1974 by the Soviet’s Luna probe." Gizmodo quickly updated their post, noting the watch's status as a goof. I sympathize. I distrust the entirety of March, knowing that just like Christmas, the celebration of April Fools' Day will creep earlier and earlier into the year.

... "A" for delivering an axe with a parachute.

Average those grades, and we get...

Tumblr is allowing its users to vote for their preferred lizard leader. The nominees include Mop, Rick, Deborah, and Wretched Tooth. The design is cute and the idea is weird, but what I adore is the surge of fan art. Take for example the best selling book, Turning the Tables: The Rick Story by Rick.

Timehop, an app that revisits social media moments from our past, gave its users a preview of the future. In the year 2025, ads will run for Fast & Furious 17. I could live in a speculative future like this one. Between 2017 and 2025, the world would get ten Fast and Furious films. That's more than one a year! 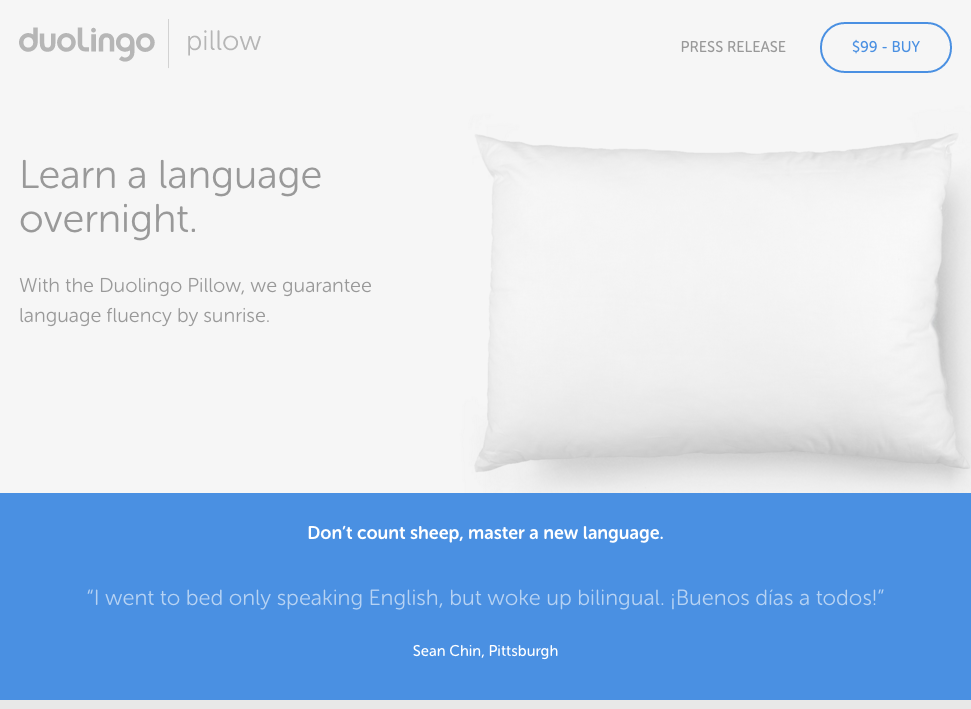 It's not a perfect bit, but the testimonial from Sean Chin of Pittsburgh, above, is enough to get the pillow above average marks. Listen people, the bar is low.

"As well as helping you find your kindred spirit," writes Master of Malt, "Ginder will help you avoid awkward moments with unsuitable prospective partners. Picture the scene, you've been on a number of dates with a suitor during which you've both mentioned in passing your love of a good G&T. Now you're sat on an uncomfortable beanbag in their flat, but things are looking up as they've just made you a refreshing drink! As you take a sip, knowing exactly how delicious it should be having perfected your personal serve, your taste buds are instead greeted by something that tastes of sun cream and which appears to have a massive novelty-sized wedge of your least favourite citrus fruit bobbing about in it, bopping you in the face. Ginder, thankfully, will make such horrors a thing of the past." 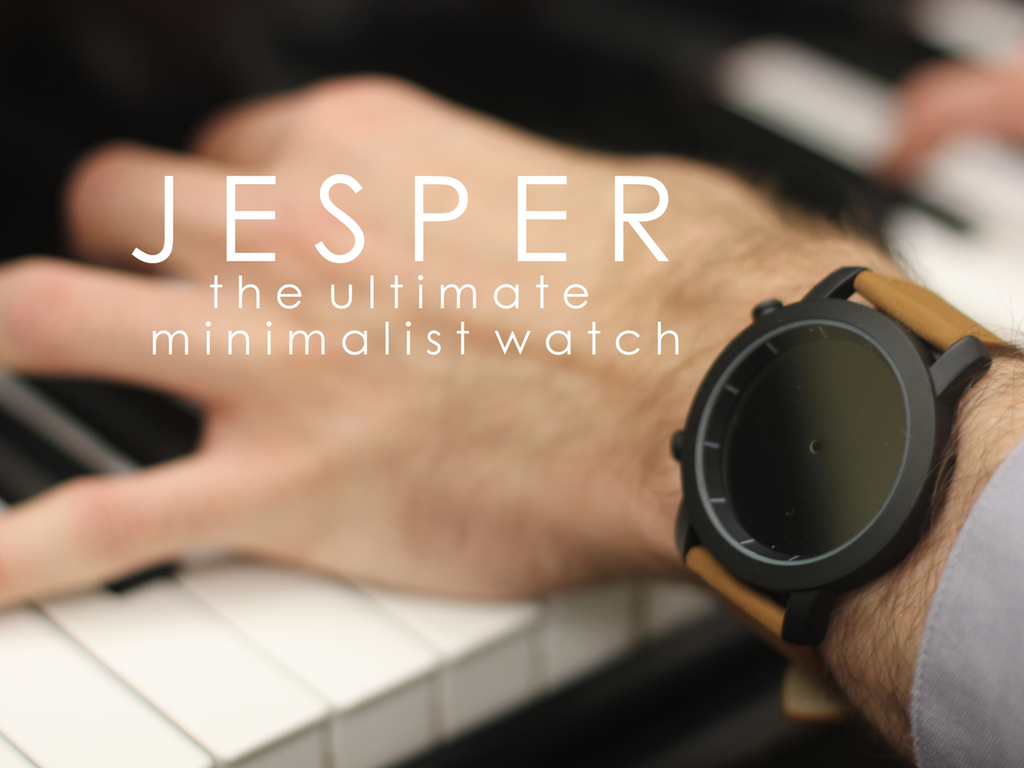 Sorry, Jesper. There's only room for one goofy watch on my arbitrary ranking of April Fools' jokes. Though I do dig the leather strap, the matte finish, and the satire of Kickstarters that don't accomplish anything besides a tidy profit for their creators.

Easy? Yes. Subtle? Sure. Classic? I think so. This is the best a brand can do with the least possible effort.

I'm not one for Silicon Valley humor, but I appreciate three things about this gimmick. First, it's well-produced. I'm surprised, frankly, that UNIQLO didn't beat H&M to the punch here, considering everyone in the tech community shops at UNIQLO because where else will we find form-fitting jeans for under $50? Second, the Zuckerberg signature on the inside neck of the T-shirts is a fine touch. Third, I read the URL markforhm.com as Mark Fuhrman dot com.

"It's become abundantly clear," says the fictional scientist, "the future of meat is the past." At a minute in length, the video gets points for not overstaying its welcome.

This isn't a bad goof. In fact, I like the design of the proton pack. That said, this is basically a press release for the new Ghostbusters movie thinly disguised as a gag. Sure, I can get really existential here and be like, "Hey, isn't this whole charade, just one dumb press release thinly disguising the endless hunger of megabrands." And yeah, yeah it is that. It's just that.

Sure. Why not. I guess this counts as a joke? At least they didn't make an entire website for a opera-singing refrigerator or Wi-Fi-connected jeans.

Why didn't the brilliant minds at Lyft call this Prank My Ride? And where are Ashton Kutcher and Wilmer Valderrama? Were they too busy? 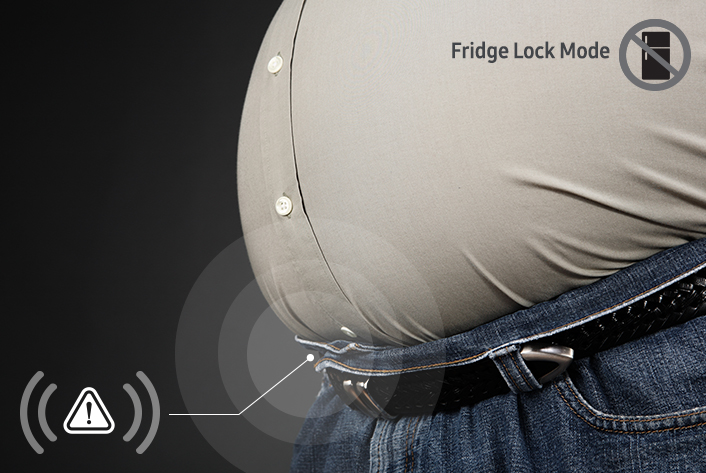 Wi-Fi-connected jeans from Samsung. Of course. Here's one of the features:

"Fridge Lock: If the tension around your waist gets too high, the embedded ARTIK chip module will send signals to your refrigerator to prevent you from overeating. The fridge door lock can then only be deactivated with consent from a designated person such as your mother or significant other.

Dads: they love to eat!

WHAT A HARMLESS APRIL FOOL'S JOKE, WHAT COULD GO WRONG pic.twitter.com/Maw8a6VUSA

Gmail drops mic on its own foot

Gmail has already pulled its poorly considered mic drop feature. Users could "send and mic drop" their emails with a button that attached a GIF of a Minion dropping a mic to outbound messages. Unfortunately, the button replaced Gmail's "Send and archive" option. Some people also reported bugs in which the regular "send" option attached the GIF. As shown above, not every email needs a Minions GIF. The irony of Minions — whose purpose is to grief the planet — being at the center of this kerfuffle, earn this goof its rare grade. 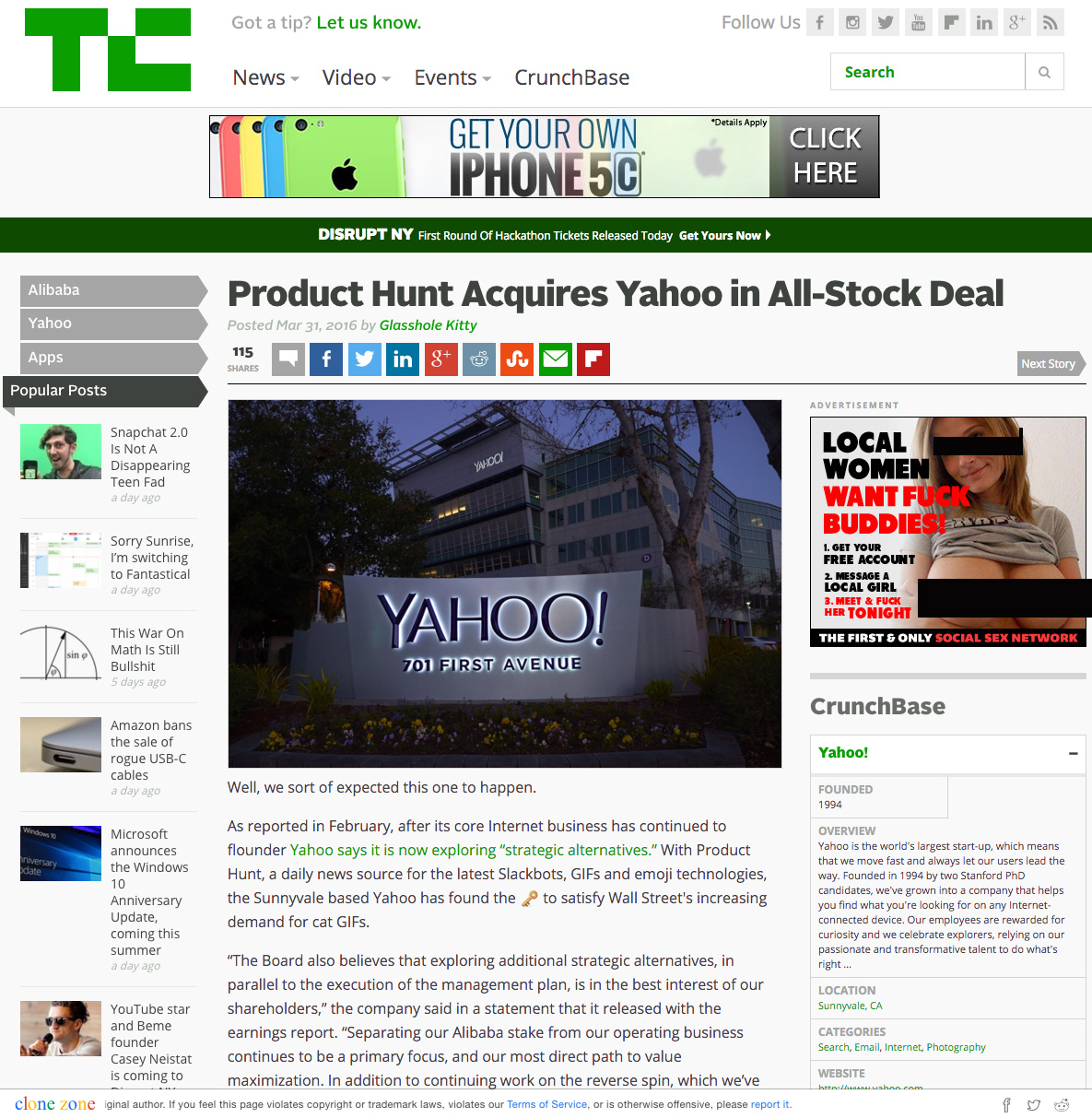 (Images edited to conceal nudity and identity, since it's fair to assume the images are stolen.) 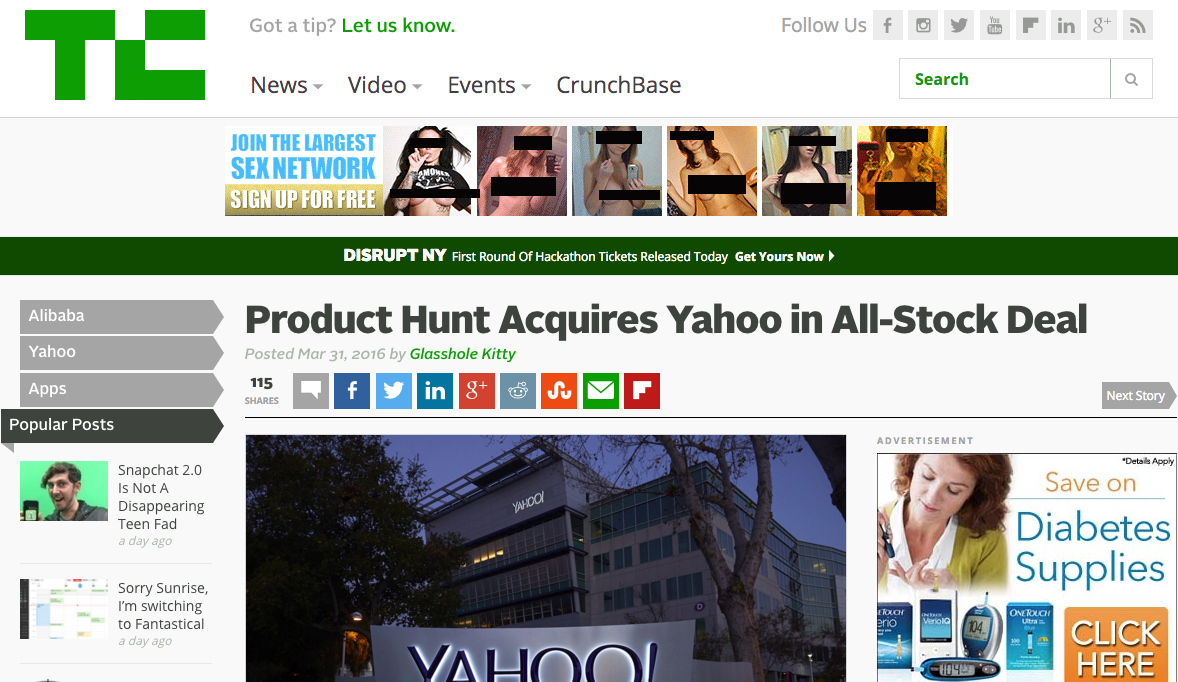