Out Surfacing the Surface

You can’t help but hear about tablets that are designed to replace your laptop. Microsoft and Apple have been pouring tons of effort and marketing into the Surface Pro and iPad Pro, two devices that are supposed to be productivity machines in addition to tablets. You can see them at every NFL game, in countless commercials, and plastered billboards. You’ve also probably heard that these productivity tablets still have a lot of room for improvement, as both tablets and laptop replacements.

But there’s a sleeper agent that’s competing with them, another tablet vying to be a computer that you might not have heard about: the Samsung’s Galaxy TabPro S. It was announced earlier this year and quietly put on shelves a couple of weeks ago. The TabPro S is a lot like the iPad Pro and Surface Pro, and it’s yet another tablet with the promise of being a productivity machine.

In many ways, the TabPro S is better than the Surface Pro or iPad Pro. It’s more portable than the Surface, yet more powerful than the iPad. It’s slim and svelte, yet runs a full desktop operating system and all of its related productivity apps. Is it the perfect device that can let you forget about your iPad and your laptop and not miss a thing? No, certainly not. But it’s the best execution on a productivity-focused tablet I’ve used yet. 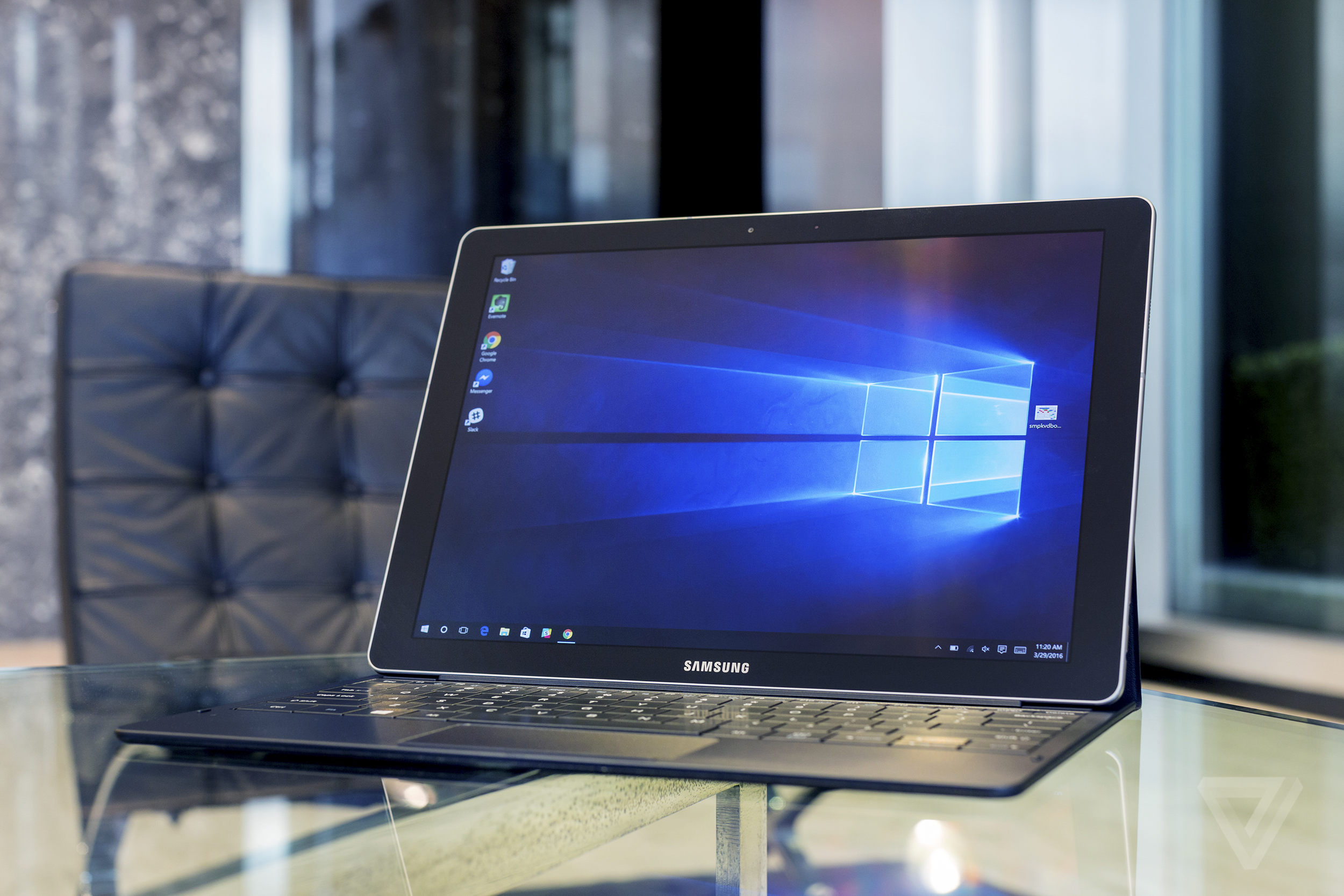 Like any good tablet, the TabPro S is remarkably thin and light at 6.3mm and just over 1.5 pounds. It shares a lot of design traits with Samsung’s Galaxy line of Android smartphones. It has a metal frame, an incredibly bright and vibrant Super AMOLED display (12-inch, 3:2 aspect ratio, 2160 x 1440 pixel resolution), and is as well put together as any of Samsung’s recent flagship smartphones. It charges via a single USB Type-C port (the only port on the device, save for a 3.5mm headphone jack), and has a speaker on each side of the display. 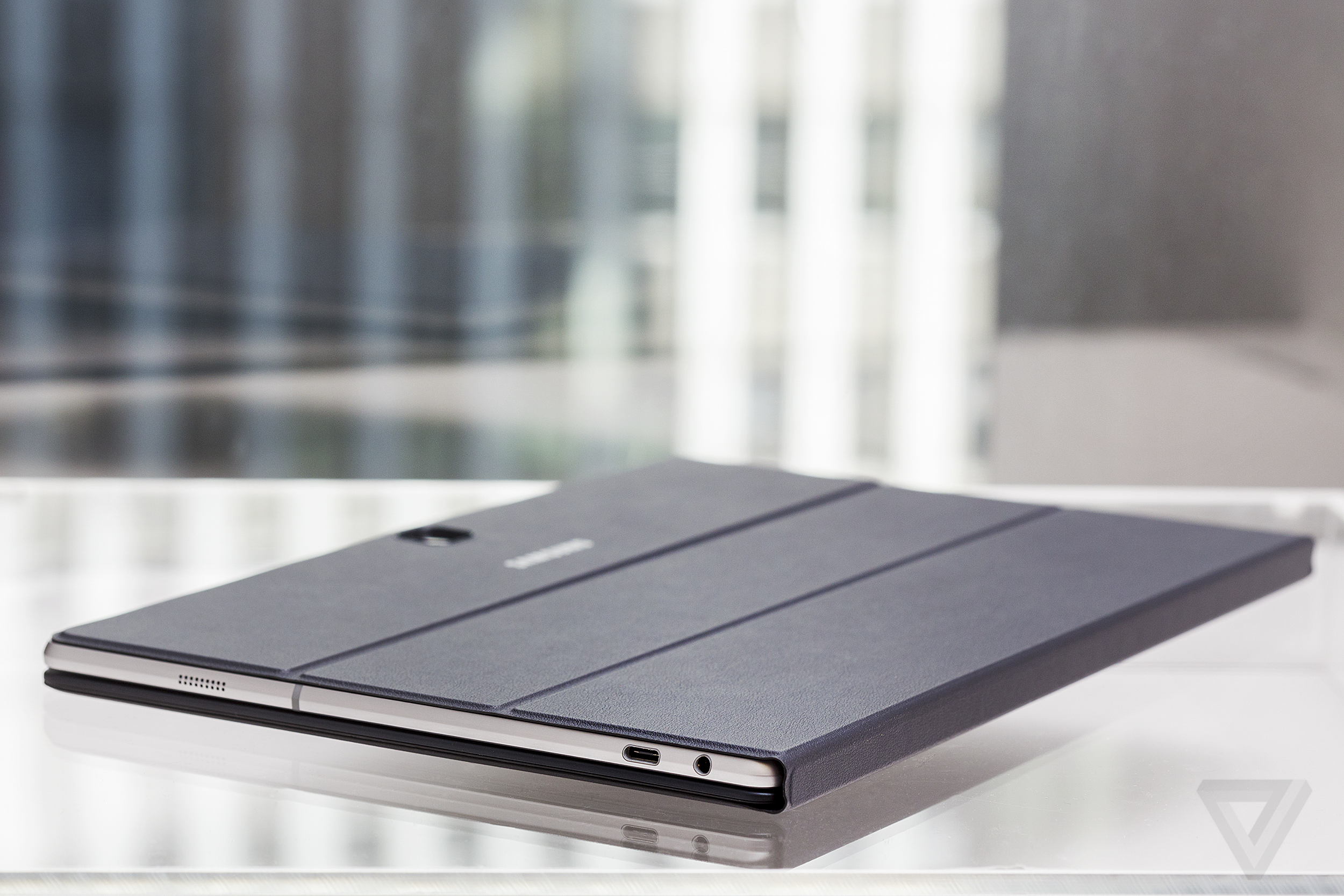 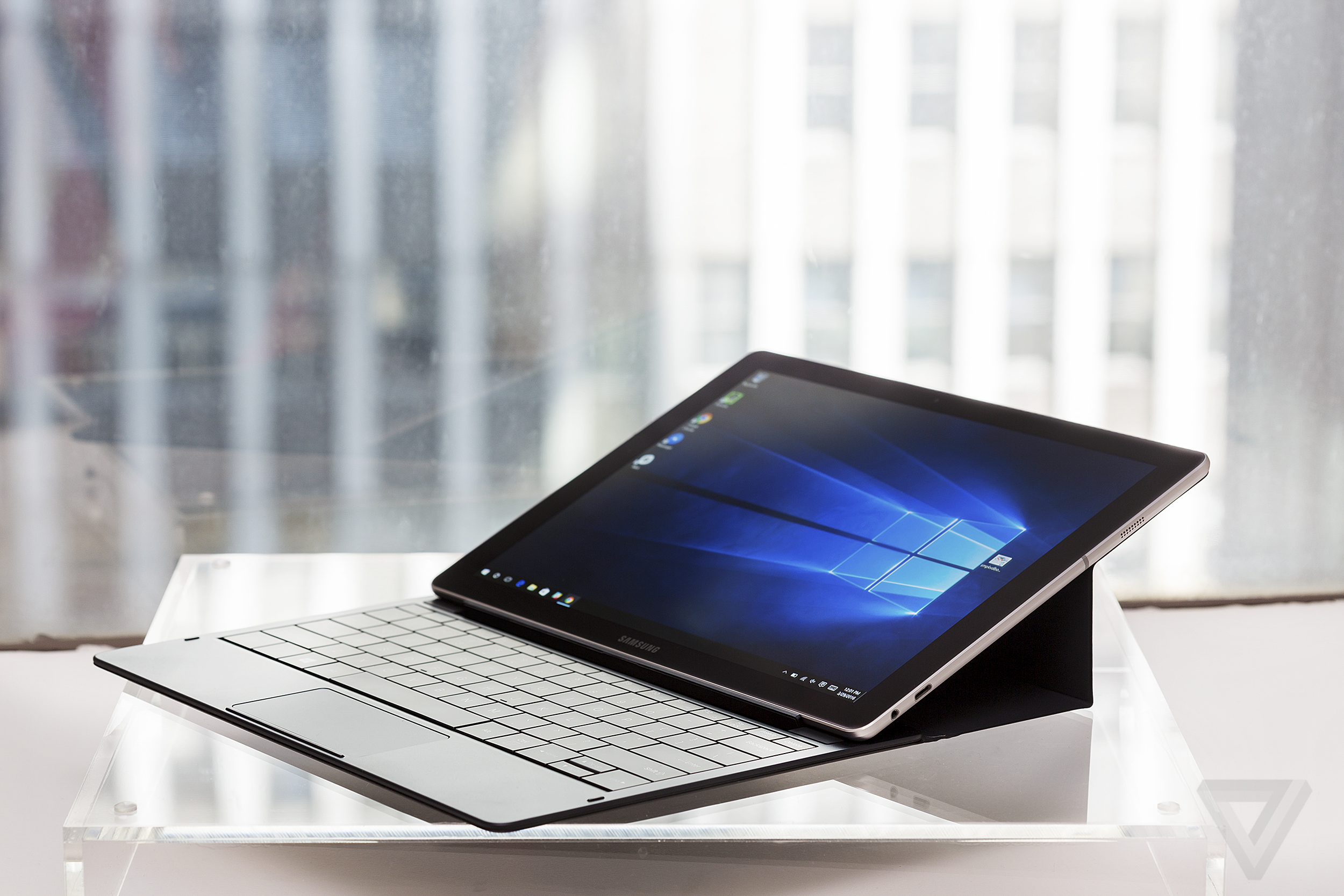 The TabPro S begs to live in its keyboard case

On its own, the TabPro S is a bit big and clunky. Like other 12-inch tablets, it’s too large and heavy to comfortably use for casual entertainment. But it really comes to life when you snap it into its keyboard case. Included with the TabPro S1, the case has a full-size keyboard, complete with a function row and plenty of shortcuts, and a trackpad. It connects to the bottom of the tablet with a pogo-pin connector, and offers two angles for typing. The whole thing snaps to the back of the tablet with magnets and folds up into a really compact folio when it’s time to leave. With the keyboard case attached and closed, the TabPro S is thinner than both the Surface Pro 4 and iPad Pro are with their keyboards.

The TabPro S does not include a pen, though one will be available as an option later this year. It was unfortunately not available for testing for this review.

The keyboard itself isn’t remarkable on first glance: it’s a bit flimsy and doesn’t inspire confidence. But typing on it isn’t an issue – I was able to get comfortable on it quickly and enjoyed typing on it more than on the Surface’s keyboard. The trackpad is small and cramped, but it’s smooth, tracks well, and supports all of the multi-finger gestures in Windows 10. The only thing I really miss on the keyboard are backlit keys, something that Microsoft’s (but not Apple’s) keyboard has.

There are two things that make the TabPro S keyboard case distinctly better than Apple or Microsoft’s, however. Firstly, it has a flat base and a small footprint. That means it’s stable on my lap, yet not so large that it falls off the back of a seat tray when I’m on a plane, two scenarios where the Surface Pro 4 struggles. Second, it has a large enough deck to rest my palms on, so it doesn’t feel like I’m working on a miniature computer and the tablet doesn’t feel like it’s going to tip forward on me as I hammer away at the keys. 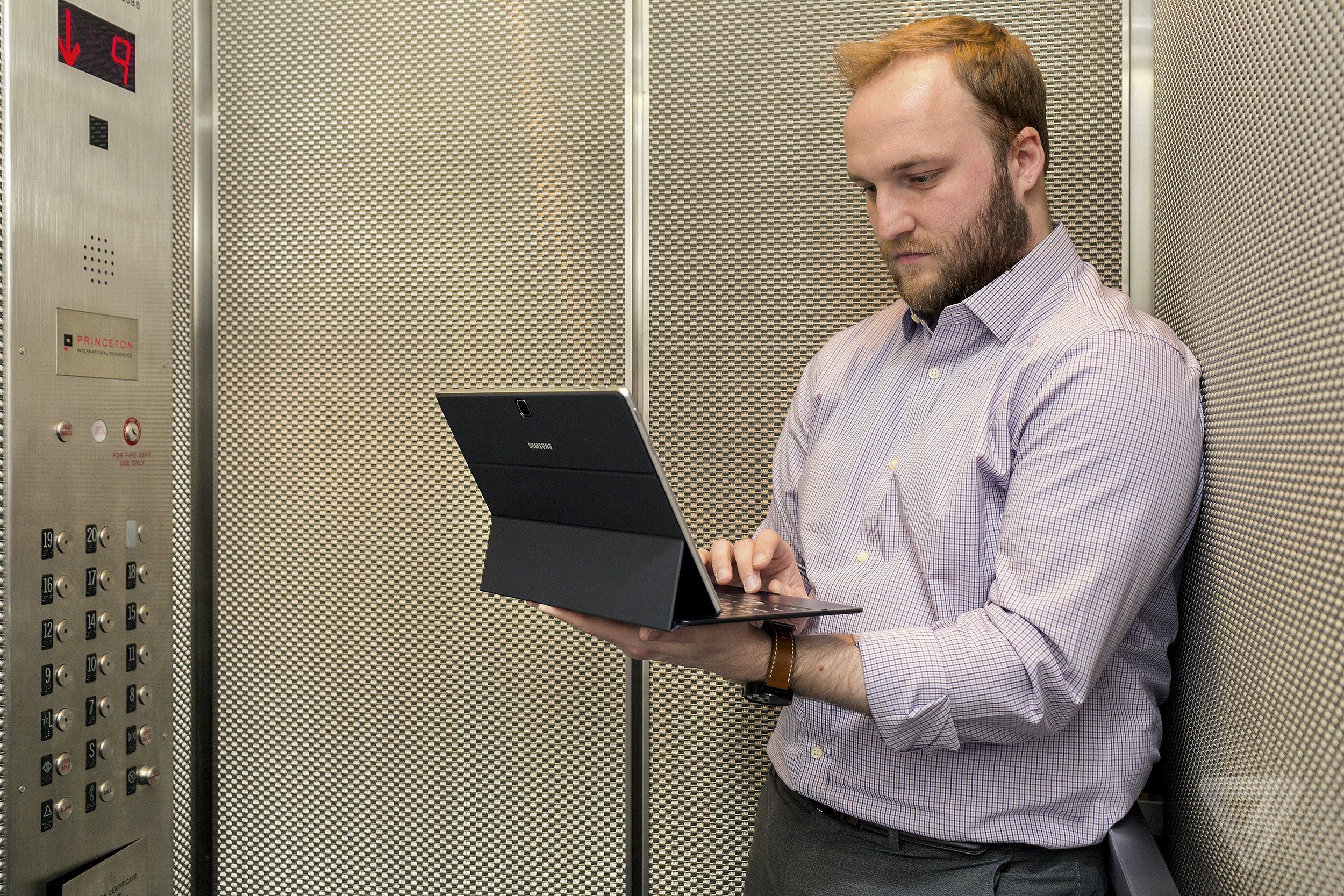 The TabPro S display is also good: it’s bright and sharp, and if you’re familiar with the AMOLED screens on Samsung’s smartphones, just as vibrant. The 3:2 aspect ratio is ideal for productivity – I can see more of a web page or document at a time – but if I watch a widescreen video, there are bars above and below the image. That’s a tradeoff I’m willing to make – the TabPro S is more of a productivity device than entertainment tool anyways. The only annoying thing about the display is Samsung’s aggressively short screensaver, which overrides Windows 10’s native screensaver. Leave the display alone for a minute and you’ll be greeted with a spinning block of 3D text saying "Samsung Galaxy TabPro S" that looks like it was lifted straight out of Windows 95. Samsung says the feature is there to prolong battery life, but I found it frustrating when I was reading something on the screen for a few minutes at a time. 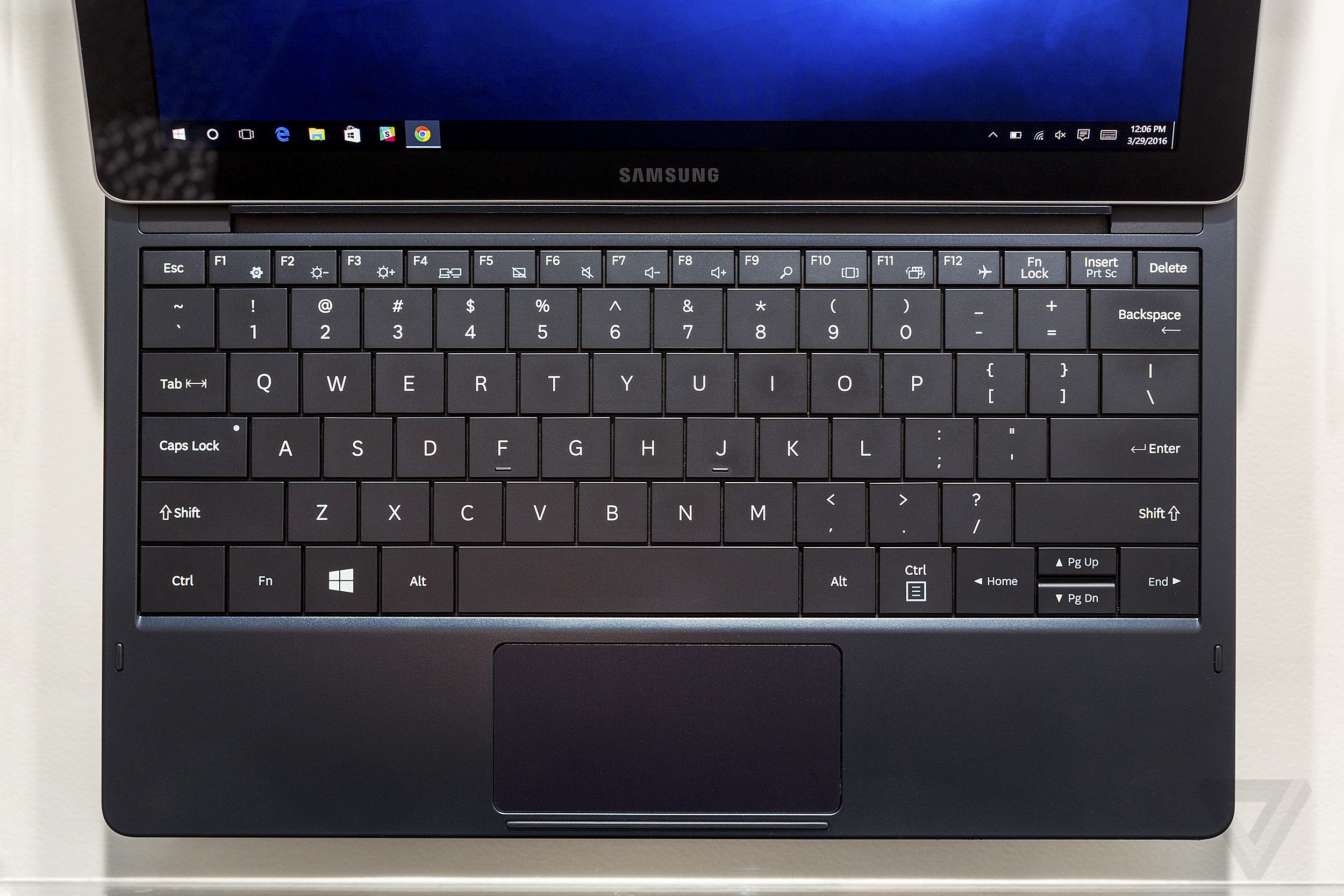 Samsung has included the complete, (mostly) unadulterated version of Windows 10, so the TabPro S can run any desktop app you need. I spent most of my time on it bouncing between Slack, Chrome, Word, Twitter, Evernote, and any other productivity app you might find in a modern workplace and the TabPro S didn’t skip a beat. Its Intel Core M processor isn’t as powerful as the chips you can get inside a Surface Pro (if you’re willing to pony up for a more expensive model), but it had no trouble running the apps I needed it to. Your mileage might vary with heavy photo and video editing apps and it certainly won’t run PC games well at all, but if that’s your goal, this probably isn’t the computer for you. 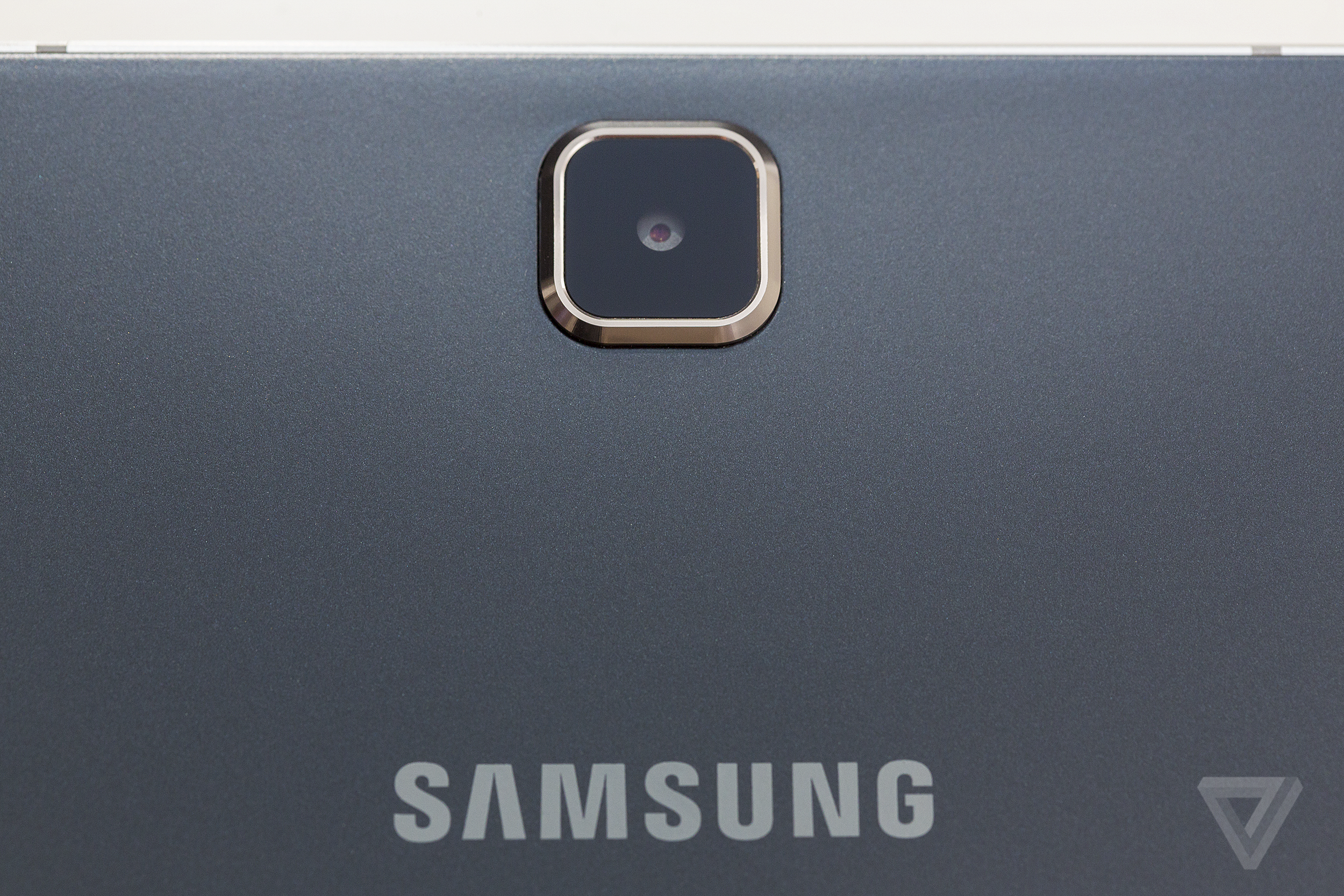 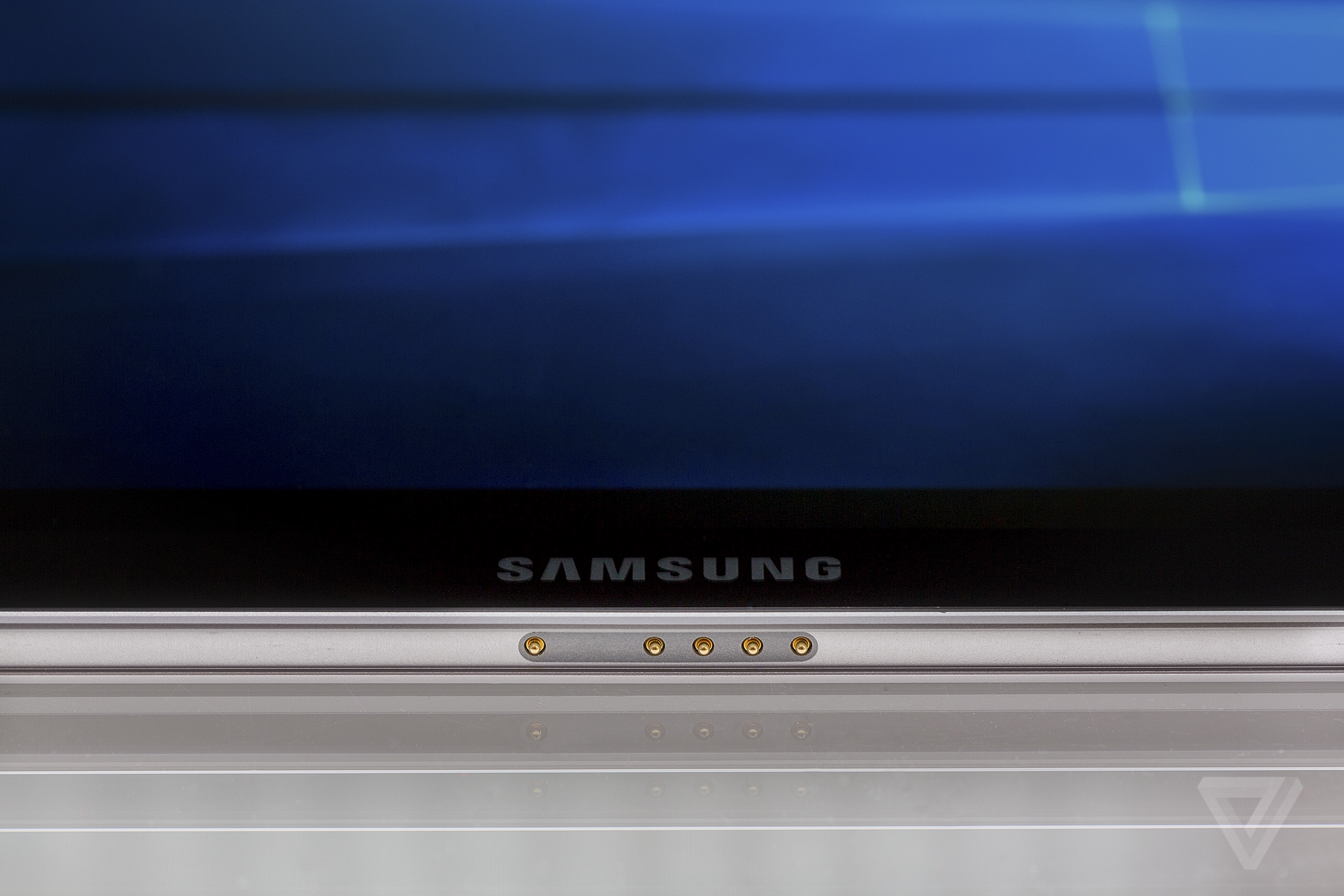 The only performance issues I ran into were related to the paltry 4GB of RAM in the TabPro S. Chrome tabs frequently need to refresh because they were lost in memory, which makes it difficult to multitask quickly. A tab with a paused YouTube video might refresh and lose my place after just a few minutes away. My Gmail inbox won’t always be up to date when I return to it, until the tab reloads entirely. An easy solution to these problems would be to just equip the TabPro S with 8GB of RAM, but the 4GB configuration is the only one Samsung offers.

On the tin, Samsung claims that the TabPro S is good for 10.5 hours between charges, which is based on continuous video playback. I saw closer to six hours of battery life when I used the TabPro S as a real computer: display at a medium brightness, bouncing between a bunch of apps, and browsing a dozen or so tabs at a time in Chrome. That’s comparable to my experience with the Surface Pro 4 and enough to get me from New York to California, but it’s not quite as long as the iPad can last.

Unfortunately for Samsung, the TabPro S suffers from many of the same bugs as other Windows 10 machines – specially convertibles – I’ve used. Sometimes it won’t go to sleep properly when I close it up and toss it in my bag, leading to a dead tablet when I pull it out the next day. Other times I’d boot it up only to find that the clock has not kept the correct time. Windows 10 is a very good operating system, but even though it’s been almost a year since it was officially released, it still feels like a work in progress.

Samsung has equipped the TabPro S with a couple of unique features if you have a Samsung smartphone. The Flow app, which works with the Galaxy S7 and S7 Edge, as well as the S6, S6 Edge, Note 5, and S6 Edge Plus running Android Marshmallow, lets you use the phone’s fingerprint scanner to log in to the TabPro S. It also mirrors notifications to the computer, lets you reply to incoming messages without taking your hands off the keyboard, and remotely start a wireless hotspot mode on the phone. A lot of these features are similar to what Apple offers between the iPad and iPhone, but they aren’t quite as feature rich or reliable. I can’t filter what phone notifications ping me on the TabPro S, nor can I start new message conversations from the tablet. And the fingerprint authentication feature proved to be slower and clunkier than just punching in a four-digit PIN code. 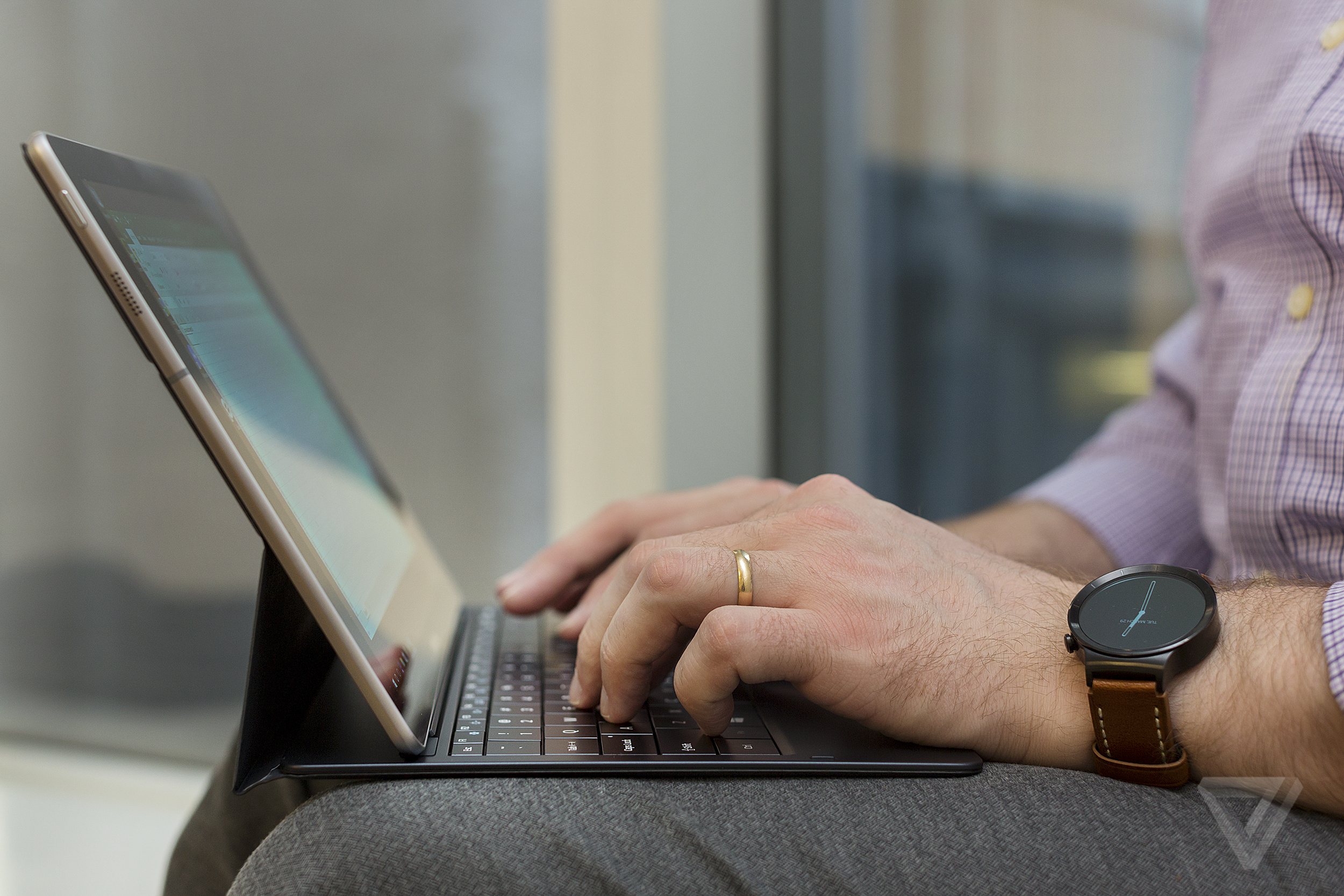 The Galaxy TabPro S isn’t the perfect in-between device that straddles the line between a fun, entertaining tablet and a powerful productivity device. It doesn’t have the selection of apps an iPad offers, and it doesn’t have the power on tap with the Surface.

It is an excellent travel computer, however, one that can go almost anywhere and do almost anything you need it to. It’s an ideal second computer to accompany a more powerful machine at home or the office. I’d love to see Samsung offer higher-tier options with more RAM and even built-in LTE – if you’re really going to make an ultraportable computer, it needs to be able to connect to the internet from anywhere.

There still isn’t a tablet available that I can comfortably recommend to replace most people’s laptops. You’re still better off getting an iPad for entertainment and light work and a more capable machine for when it’s really time to get down to business. But if the next round of much-hyped productivity tablets borrow some of the features Samsung’s built into the unassuming Galaxy TabPro S, we may not be far off from getting that perfect in-between device.