Although emoji fill in where words are lacking, their true meaning might be getting lost in translation. People interpret emoji differently, according to a new study from the University of Minnesota, Twin Cities. This holds true even if chatting is happening over the same operating system.

, for example. The researchers surveyed online respondents on how they interpreted the emoji's sentiment, rating it on a scale from -5 (strongly negative) to +5 (strongly positive). Seventy percent of people put the face in the negative area of the chart, with most people ranking it at -3. But still, 27 percent of respondents thought it conveyed a more positive emotion. The chart below breaks down the results. 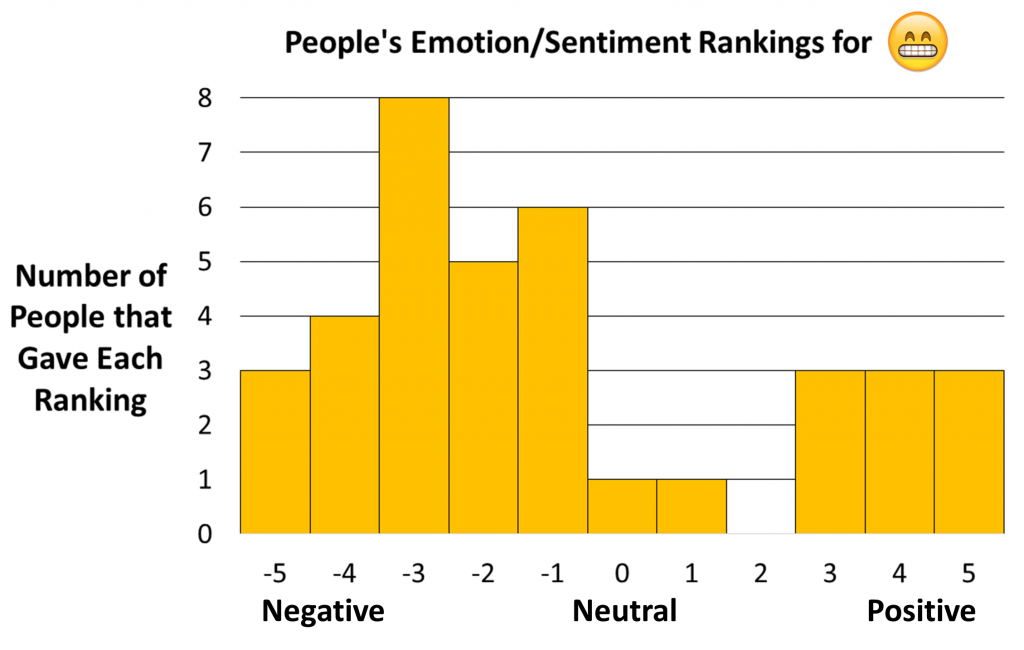 The researchers think emoji are interpreted differently because of their subtle details, like the shade of their cheeks or the slant of their eyebrows. Emoji miscommunication can be even worse across different operating systems. The "grinning face with smiling eyes" emoji, for example, is seen as a positive image on a Microsoft, Samsung, LG, or Google phone, as opposed to on an Apple device. So an iOS user could be trying to send a thought with the negative-leaning emoji and end up conveying a more positive message.

On average, the researchers say the difference in emoji ratings between two platforms was greater than two points on their scale. Though this doesn't mean emoji interpretations are wildly off, it still suggests that some messages could have their meanings muddled. The researchers suggest standardizing emoji characters across platforms, although it would still leave room for individual interpretation. Beyond the design of the emoji, they say changes to users' experiences on their phones could help fix this issue. Phones could let users know they are on different operating systems, for example, so users would be aware that their emoji will be displayed differently.