Snapdragon 820, 12-megapixel camera, and a lot of aluminum make up HTC's latest flagship

HTC is today formally announcing the 10, its flagship smartphone for 2016. The HTC 10 follows last year's M9 and blends the design of the M series with the A9 that came last fall. HTC says it spent 12 months designing this phone and integrated feedback from its customers throughout the development process.

The 10 (there's no One or M in the phone's name this year, it's just 10) has everything you might expect from a flagship Android phone in 2016. There's a 5.2-inch, quad HD Super LCD 5 display that HTC says displays 30 percent more color than last year's phone. The screen is covered in Gorilla Glass with curved edges that blend into the phone's metal frame.

The 10 is powered by a Qualcomm Snapdragon 820 processor and 4GB of RAM that we've seen in a handful of high-end Android phones already this year, and there is 32GB of internal storage plus a MicroSD slot for expansion. HTC says it has optimized the 10's software and hardware for faster touch response and the new phone is 50 percent more responsive than its predecessor. The 10's battery measures 3,000mAh, which HTC says is good for up to two days of life thanks to software and hardware optimizations, and supports Quick Charge 3.0 through the phone’s USB Type-C port.

The design of the 10 is similar to both the M9 and A9, and is best described as a blend of the two. It has HTC's signature all-aluminum construction, with large chamfered edges and machined ports. Below the display is a fingerprint scanner flanked by two capacitive buttons for back and recent apps — a departure from the on-screen buttons HTC has used on its flagships for the past couple of years. The phone itself is nice to look at and certainly not ugly in any way, but it's not a hugely groundbreaking design. At least it doesn't look like an iPhone.

The 10's design is evolutionary, not ground-breaking

HTC has long had trouble with poor camera performance in its flagship phones, and this year it promises those issues have been addressed. The 10's rear camera has a 12-megapixel sensor behind an optically stabilized f/1.8 lens that should take better photos in low light compared to HTC's earlier efforts. It's accompanied by a dual-LED flash and second-generation laser autofocus system. The camera can also capture 4K video with 24-bit high resolution audio.

The 10's front camera has also been upgraded to a 5-megapixel sensor with optically stabilized, f/1.8 wideangle lens (a first for front-facing cameras, according to HTC), that should make for better selfies in low light. 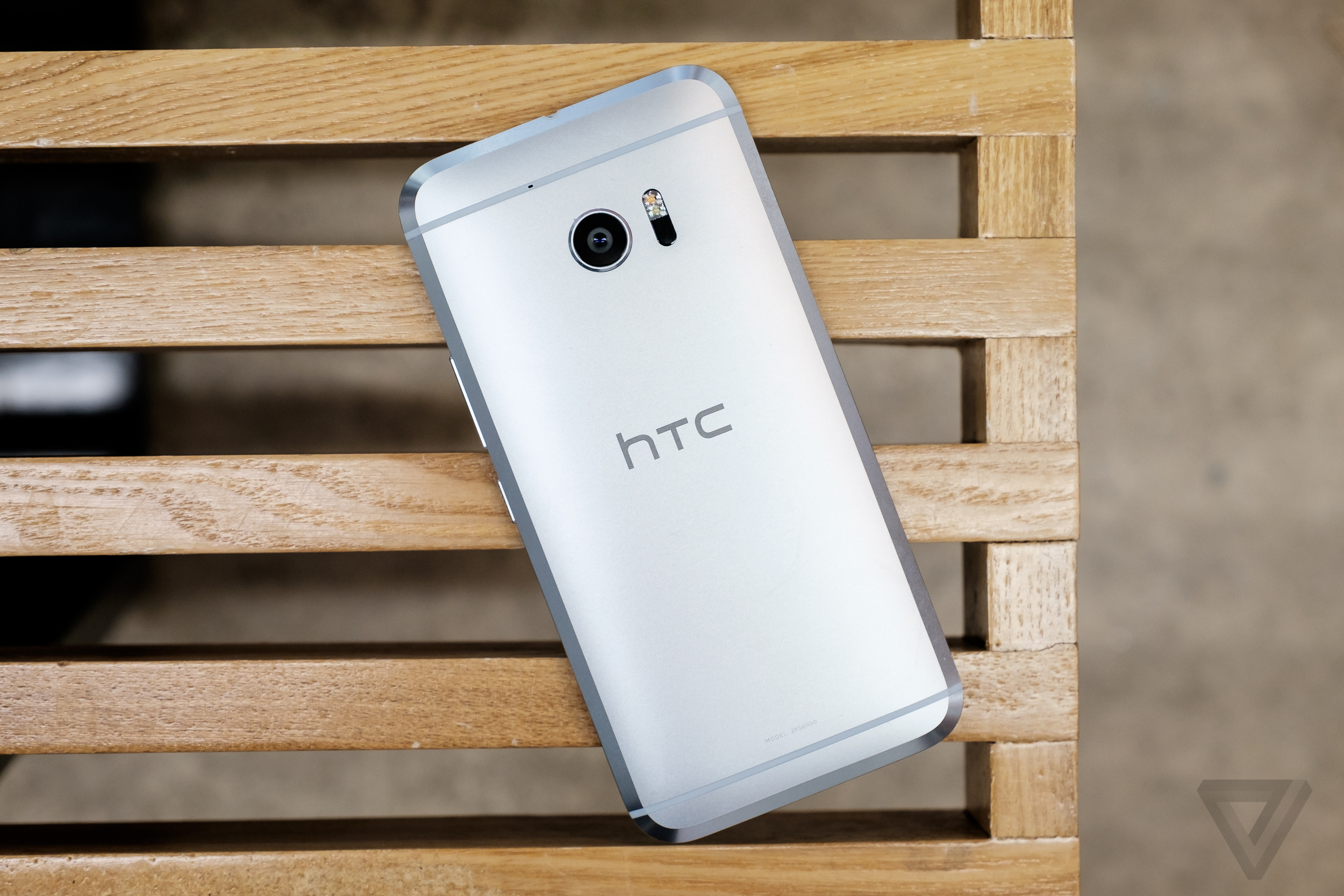 One of the entirely new features for the 10 is its high resolution audio system, with a headphone amp that can output twice as much power as other smartphones. The 10 can upscale audio to 24-bit quality, and HTC has built a customizable audio profile feature that tunes the sound specifically for your ears. In the box with the phone are Hi-Res-certified earphones and HTC has partnered with JBL to produce a noise-cancelling set of headphones that are powered by the phone's USB-C port. Another unique feature of the 10 is its ability to wirelessly play audio through AirPlay-certified speakers, which makes it the first Android phone to do so out of the box.

HTC's software approach is much more hands-off this time around

Perhaps one of the biggest changes with the 10 is found in its software, which is much closer to Google's vision of Android than HTC's earlier efforts. HTC says it worked with Google to reduce duplicative apps, and the 10 uses Google's apps for key things such as calendar, photos, and music. HTC's email, messaging, and camera apps are still around, however. The interface more closely resembles a Nexus device, and HTC says it has redesigned its apps to fit in with Material Design guidelines. Of course, once carriers get ahold of the 10, plenty of bloatware and duplicative apps will likely find their way onto the phone.

Based on everything HTC has shown, the 10 doesn't appear to be a hugely groundbreaking smartphone. It doesn't have any wild new technologies or represent a rethinking of how a smartphone could be built or function. It's a refinement on ideas and concepts that HTC has been working on for years, and it may very well be the best phone that HTC has produced yet.

You'll be able to find out if that's enough for HTC to compete when the phone ships next month for $699. It will be available in two colors — black and silver — in the US, while global markets will see a gold option and Japan will get a special red color. HTC is offering preorders of an unlocked version of the 10 through its online store starting today, and it will be available from Verizon, T-Mobile, and Sprint (but not AT&T), as well. We'll have a full review assessing HTC's claims and comparing the 10 to the best smartphones you can buy right now in the very near future.

READ NEXT: OUR HTC 10 REVIEW