A smartphone with a conscience

The first thing that greets your eyes when you open the packaging of the Fairphone 2 is a simple message: “Yours to open, yours to keep.” For added emphasis, these words are printed on the inside of the device, seen before you assemble it for the first time. These words represent two of the Fairphone’s major selling points, and combined with a third — the fact that it uses a number of conflict-free minerals in its construction — create a rare proposition in the electronics market: an ethical smartphone, or, as near to one as you can hope.

This ethics statement is weighed against the fact that the Fairphone 2 is not flagship technology. It’s good, yes, but in the developed smartphone markets where the Fairphone’s cost will be palatable (it’s a pricey £425 in the UK, where it's provided by The Phone Co-op, or around $596), it’s going up against handsets that represent the cutting-edge of industrial design. They’re quicker and thinner, with better screens and better cameras. Can Fairphone win by sticking to the high road? 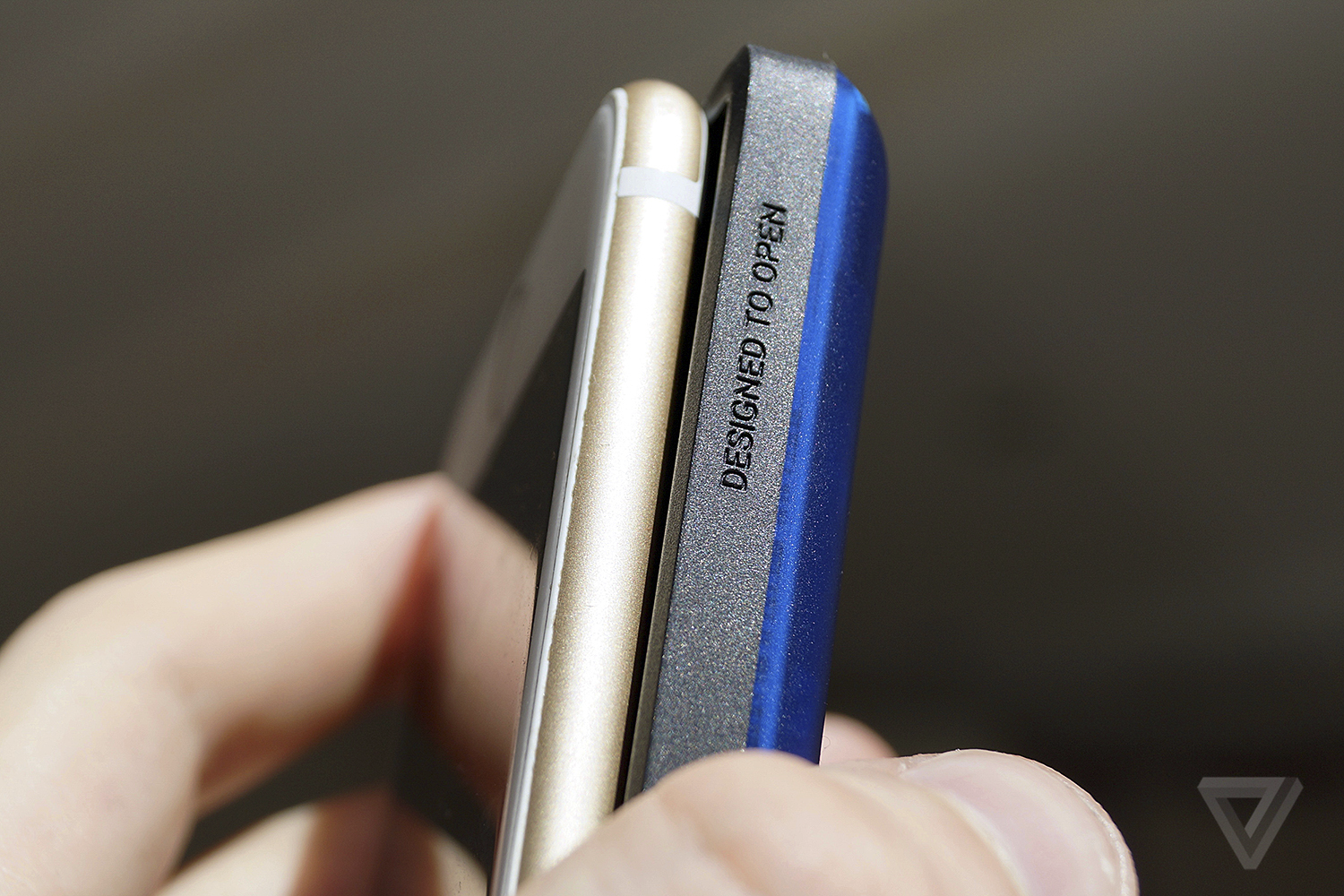 The Fairphone 2 next to the iPhone 6.
its plastic case is as squared off as an ‘80s hatchback

Once you put the Fairphone 2 together, the first thing you notice is how big it is. It’s 11 millimeters thick, and its plastic case is as squared off as an ‘80s hatchback. The 5-inch full HD display is sharp and bright, with a pixel density of 446ppi, but it also has sizable bezels. It’s comfortable enough to hold, but a noticeable presence in your pocket, especially if you’re used to flagship devices. The plastic body is also less classy than most metal-build devices, although I personally like how it feels. It’s kind of tough! Resilient! And the translucent cases are also pretty cool.

More importantly, the bulk makes sense. Designing a phone that’s easily repairable means things can’t be glued together — you have to make space for things like screws and clips that allow you to remove and replace components. The company also claims that the rear of the phone is basically a case in its own right, offering built-in protection. I agree with them on this score. Partly because putting a case on the Fairphone 2 would give it the approximate thickness of a paperback novel, but also because I dropped the phone a few times while testing it (first by accident, then on purpose) and it came away little more than some scuffed plastic. 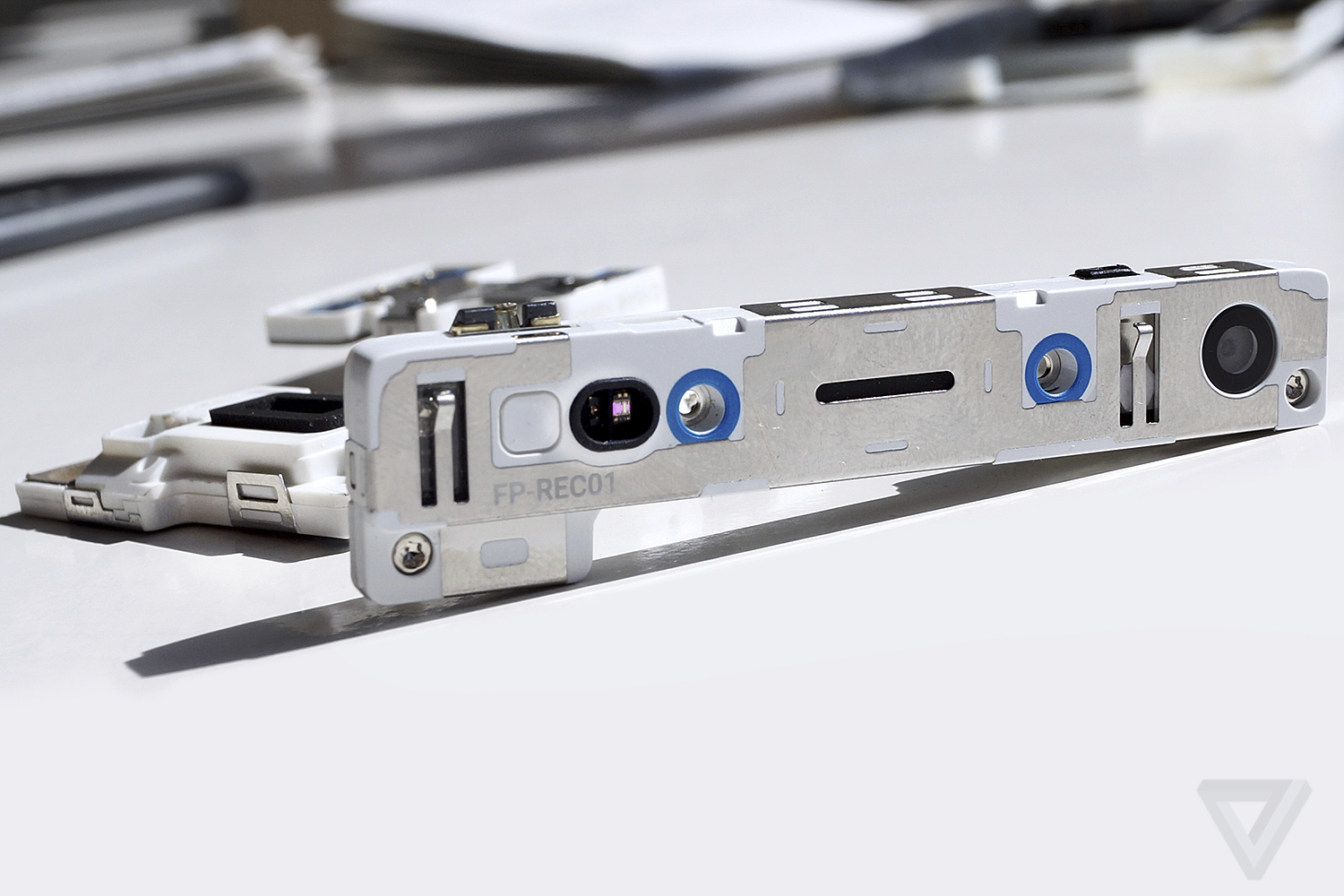 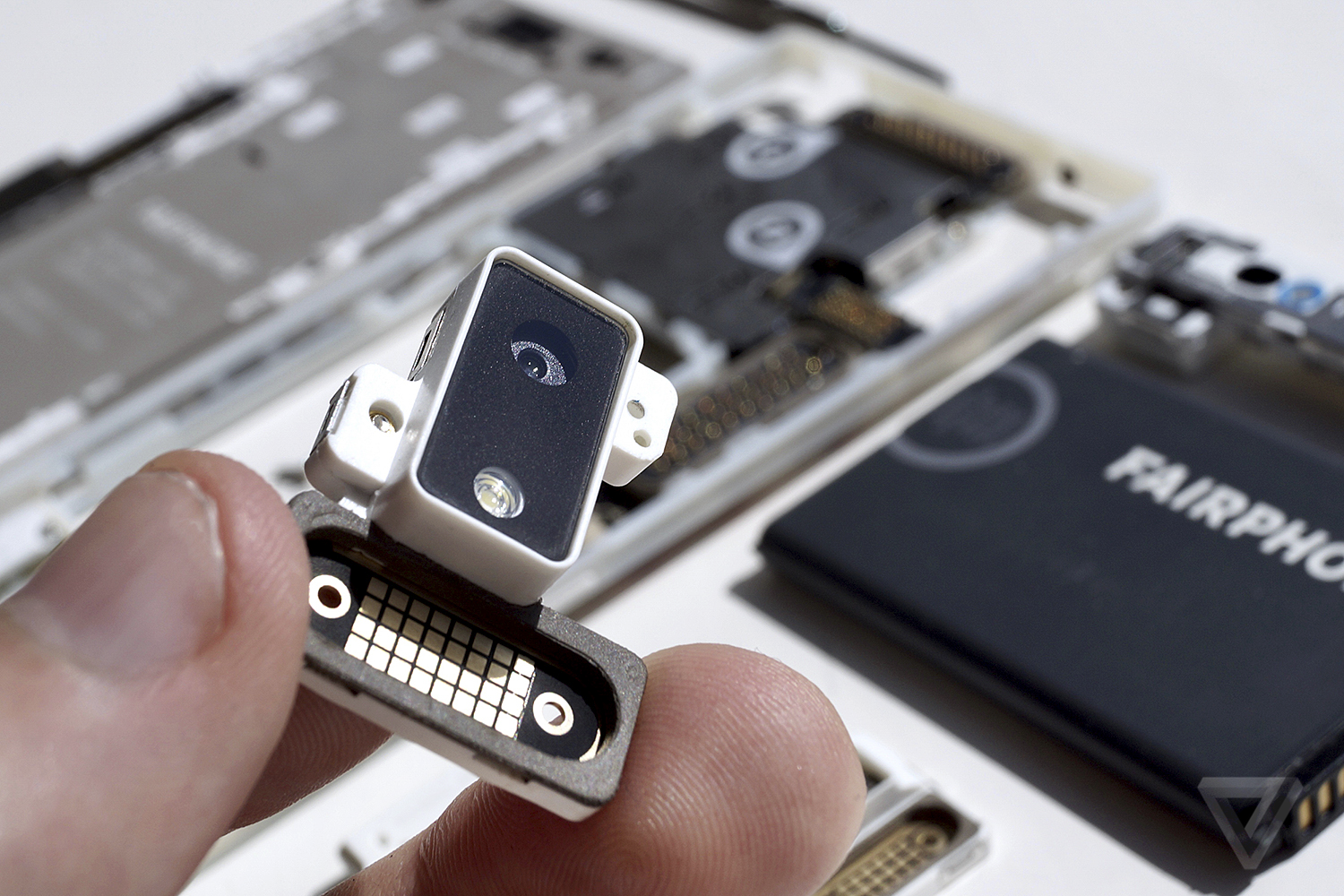 the first phone to score 10/10 with repair evangelists ifixit

Really, though, this review would have been better served if I had cracked the screen. Sustainability for Fairphone doesn’t just mean ethical supply chains, but also devices you can repair and hang on to. Modern smartphones are notoriously difficult to fix yourself, and that’s if you can even get your hands on the right parts. The Fairphone 2, by comparison, can be deconstructed in minutes. You simply pull off the back case, unclip and slide off the display, and then you have access to the phone’s major components, all removable using just a small Philips screwdriver. It’s the first phone to get a 10/10 score from repair evangelists iFixit, and reading their teardown is enough to give you a geeky contact high — they’re just so happy to have a phone that can be pulled apart.

It’s not a perfect build though. Removing and attaching the rear case can be tricky. The rubber seal around the screen often gets rucked up, like when you force your foot into a shoe and the heel folds over. And the corners of the display seem to just pull in dust like they are equipped with mini tractor beams. Removing the display from the main body also requires a bit of patience (and in my case, a pair of rubber gloves to get a proper grip), and the screws on individual components aren't easy to take out the first time round. More worryingly, reattaching the screen should be done with care. One time after reassembling the device I was left with a glitchy display that wouldn’t recognize my fingers and occasionally went nuts, scrolling erratically. Rebooting the phone and making sure the screen was fully clicked in seemed to fix this, but it wasn’t a heartening experience.

That said, how many other phones are you actually encouraged to take apart? How many phones can you unscrew yourself, piece by piece? If something breaks in the Fairphone 2 then you can buy a spare from the company’s site. On their store right now, a new display will set you back €85, a camera €34, and a core module — containing the chipset, SIM card, and SD slots — costs €316. The company claims that in the future it will offer improved modules so users can upgrade their phone to keep up with the times, and it has also floated the idea of modules that add extra functionality — like, for example, a case with a built-in solar panel for charging on the go.

If you buy a Fairphone 2, though, the ability to upgrade won’t just be needed in case parts fail. The phone’s hardware is distinctly midrange, and it’s likely to feel dated after a few years. The main camera, for example, uses a middling eight-megapixel OmniVision sensor, coupled with the stock Android camera app. It’s pretty poor in challenging conditions — low light, fast moving subjects, etc. — and although it’s good enough for snaps for social media, if you care at all about the photos you take, it’ll definitely disappoint. Battery life was also a bit hit-and-miss. The Fairphone 2 seemed to stay alive almost indefinitely on standby, but had moments of sudden draining in day-to-day use, and the 2420mAh battery didn’t always make it through a day of moderate use. 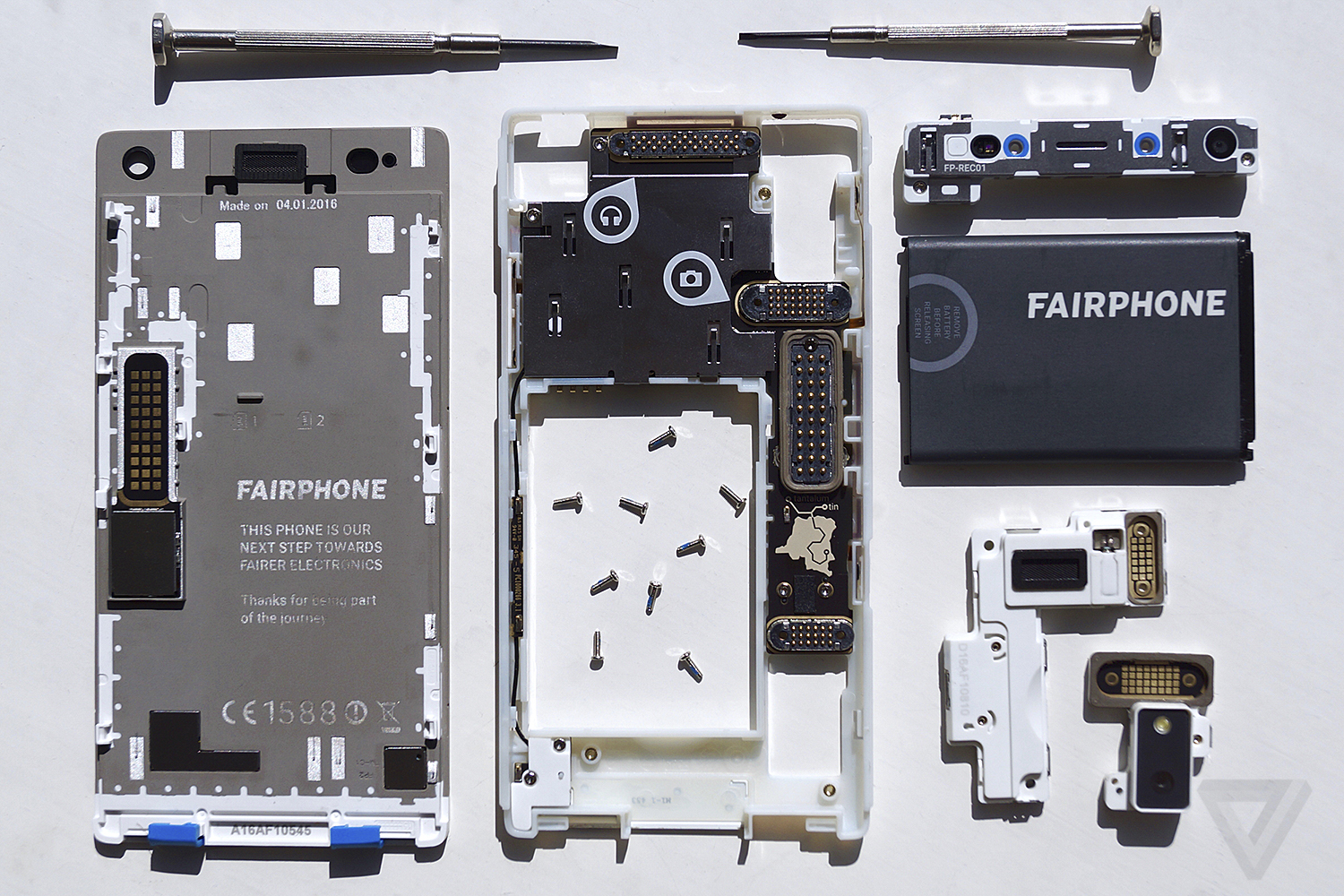 All you need to take apart the Fairphone 2 and its major components is a small Philips screwdriver.

For the rest of its innards, the phone comes with 2GB of RAM, 32GB of storage, and an 32-bit Qualcomm Snapdragon 801 processor that was upper-mid-rage fare back in 2014 (it appears in the Sony Xperia Z2, for example). All this makes the Fairphone 2 perfectly useable, but there are moments of sluggishness and lag, even on apps like Spotify and Google Maps. If you’re used to flagship devices, this is bound to wear at your nerves, but for someone who just needs a smartphone because everyone needs a smartphone nowadays it’s probably fine.

And the Fairphone does like to remind you that it’s got things other than specs on its mind. The company has skinned Android with its own Fairphone OS, which adds shortcuts for recently used and idle apps, and a number of minor alterations that seem eager to save you from yourself. Open up an app for the first time, for example, and you’re shown a warning screen for its "privacy impact analysis" — a ranking of low, medium, or high, based on what data the app has access too.

You’re also prompted to set a notification priority for each app based on the triple structure Google introduced in Android 5.0. (Something either never pings you, pings you whenever, or even pings you when you’ve set your phone to do not disturb.) Unfortunately, the Fairphone OS itself isn’t that up to date. It’s based on Android 5.1 Lollipop rather than 6.0 Marshmallow, meaning you miss out on features like improved battery life and Google Now on Tap. 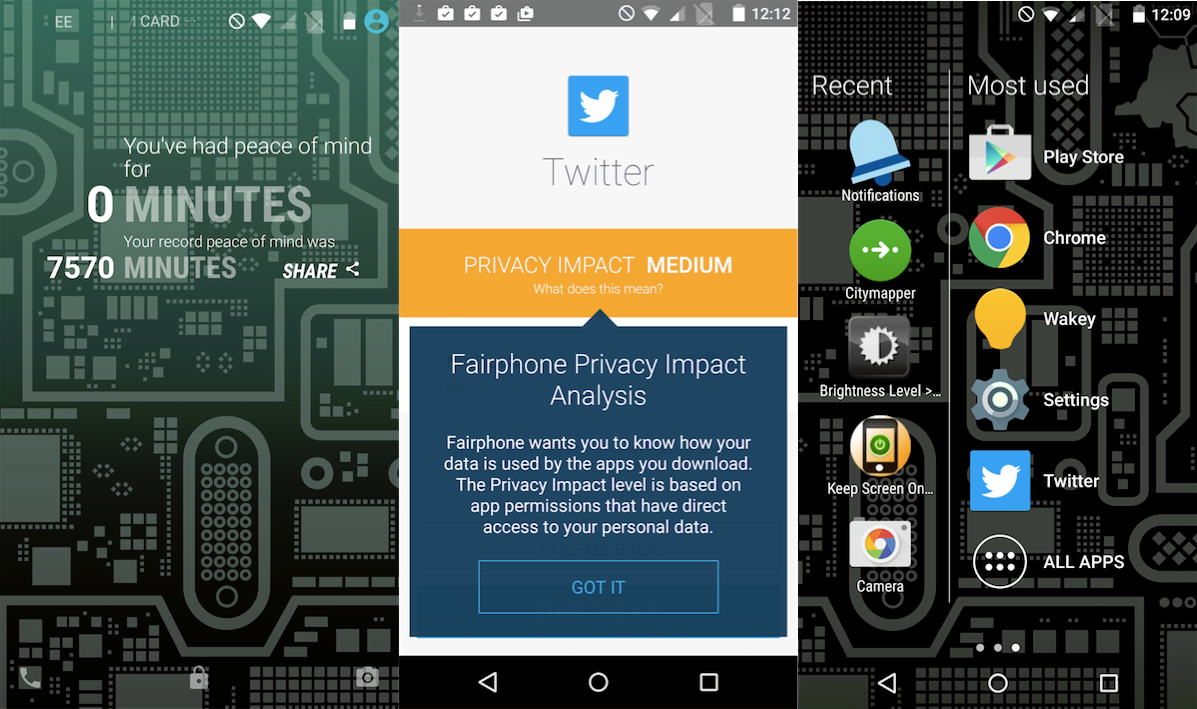 And sometimes, Fairphone’s additions can feel a bit artificial. For example, the phone has a widget on the lock screen that cycles through stats including estimated battery life remaining and something called "peace of mind." At first I wasn’t quite sure how the Fairphone was measuring this. I locked and unlocked the device, tapped the widget, and hunted for an explanation in the settings menus. It wasn’t until I left the phone alone long enough to make a cup of tea, did I realize that the widget was counting how long it was since I last unlocked it, and was now telling me: "You’ve had peace of mind for 6 minutes." Point proven I guess, but I feel the credit goes to the tea in this case. If you’re buying a Fairphone 2 you’re probably not a smartphone addict anyway, so the counter’s existence is an interesting oddity, but just a tiny bit smug.

The same certainly can’t be said for the Fairphone 2’s ethical considerations. Society may have become a bit blasé about green efforts and saving the environment (unless we’re talking about Tesla of course), but Fairphone deserves a massive amount of credit for the work it has put into investigating supply chains for minerals used in the device’s construction. It even established the first Fairtrade-certified gold supply chain for the Fairphone 2, working with a mine in Peru, a refinery in Switzerland, and manufacturers in China to create the device’s gold-plated printed circuit boards. The company also publishes a full cost breakdown for the phone, showing how much of the sticker price goes to taxes, materials, assembly, certification, designers, marketers — the whole lot. It’s fascinating information in its own right, but there are also costs in the itinerary that you just wouldn’t find with other manufacturers, like contributions toward worker welfare schemes and e-waste recycling projects.

Fairphone’s setup isn’t perfect, of course. The company still sources individual components from firms it has no control over, and even within its own supply chains there are black holes where it can’t follow. For example, during the electroplating process used to create the circuit boards, the company’s ethically-sourced gold is mixed in with gold from other sources. This means that while buying a Fairphone 2 supports proper supply chains, the device that actually ends up in your hand might not be built from these same materials. Global supply chains are convoluted and often impenetrable. Figuring out exactly how to be perfectly ethical is an impossibility. But then, think about how much worse some other companies must be doing, when they aren’t even considering these questions. 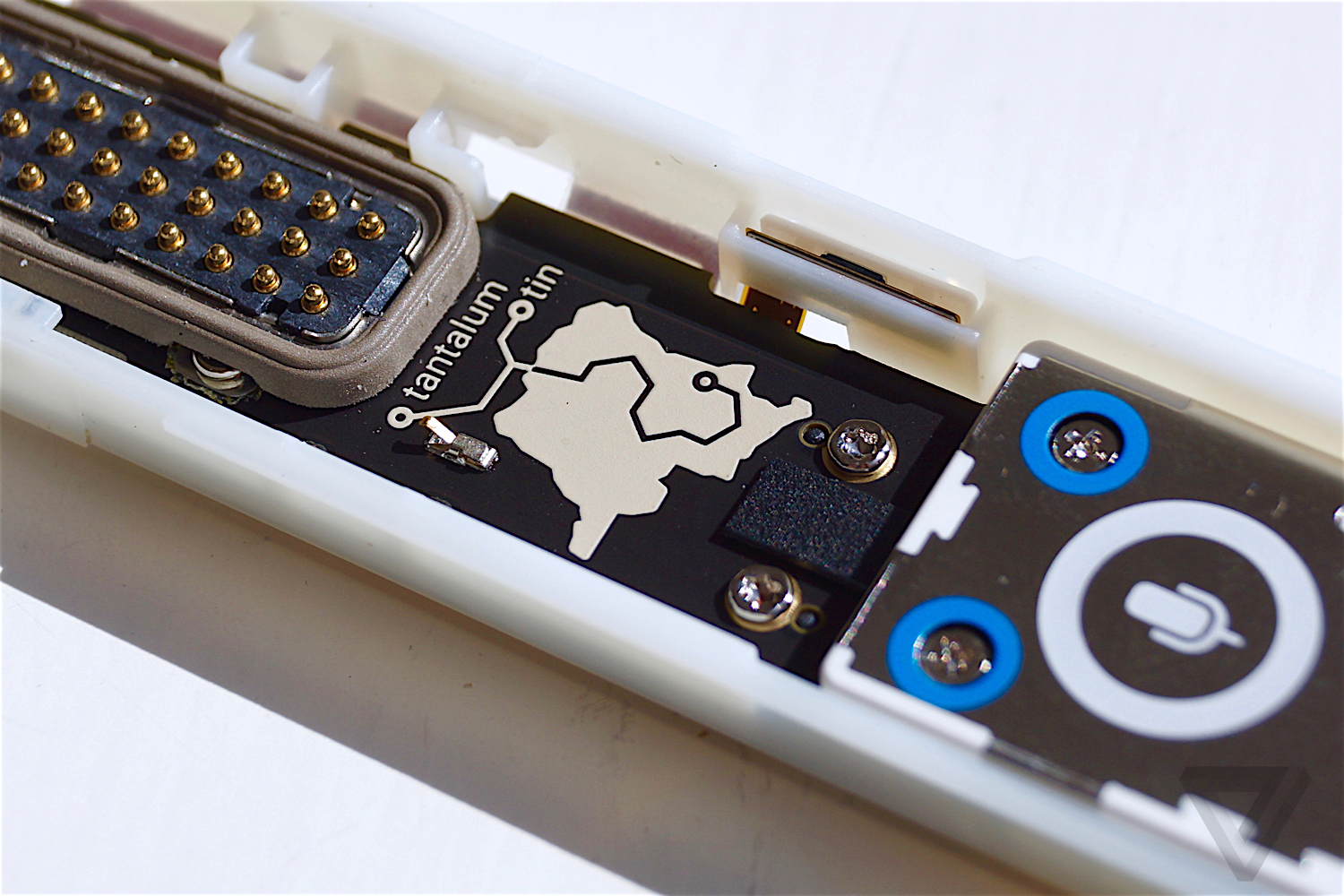 A map inside the phone shows where the tin and tantalum come from in the Democratic Republic of the Congo.

Tim Hunt, director of the non-profit magazine and website Ethical Consumer, said it was important to offer consumers the choice of an ethically-minded handset, and compared the impact one individual can have to the choice of being a vegetarian rather than a carnivore. "We do a lot of research on companies and it’s hard to find anyone else who is taking the sort of line [as Fairphone]," said Hunt. "When compared to other smartphone manufacturers they are light years ahead."

"We want to motivate the entire industry."

And Fairphone itself is honest about its own limitation, a spokesperson told The Verge: "In general, the Fairphone is far away from being a 100% fair phone. There are thousands of systemic issues that need to be tackled in the electronics value chain and it's not up to one company to change this overnight. We want to motivate the entire industry to speed up [the process] by showing there is a consumer demand for ethical products."

The bottom line is that the Fairphone 2 is a compromise, technologically, but its real promise lies elsewhere. It’s bulky, expensive, and not the fastest device around, but buying one is a vote for a world where we’re honest about the damage our consumption does to others, and where we at least make an effort to fix this. Many smartphones are sold to us with the promise that they’ll make our lives better; not many promise a better life for others.