A quick and dirty guide for understanding Doctor Strange

A quick and dirty guide for understanding Doctor Strange

The first Doctor Strange trailer is finally out, giving us our first look at the weird, wild world of mystical Marvel. You're probably excited. After all, Disney's earned enough goodwill up until now that fans can trust them to do a good job with characters most people have never heard of. Guardians of the Galaxy? Ant-Man?! It's still amazing that those movies worked as well as they did!

But what about Doctor Strange? You've probably never heard of him and he's definitely a far cry from the superheroes we've seen so far. So who is he? What's he all about? And what's with that crazy red Dracula cape? Don't worry, we've got you covered.

Okay, so first things first: Who is this Doctor Strange guy? And that's not his real name, is it?

You might be surprised to learn that Doctor Strange is actually a physician with the last name Strange. Stephen Vincent Strange was created back in 1963 by Marvel legends Steve Ditko and Stan Lee (though most would agree that Ditko should get most of the credit). Ditko on his own was a bit of an odd duck. He was the creator who, more than anyone else, opened the Marvel universe up to the weird and mystical. 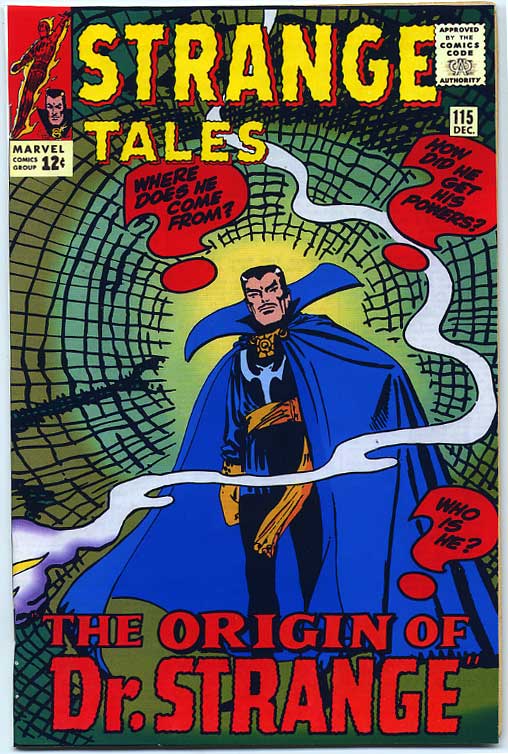 Strange's backstory was first told in Strange Tales #115. At first, he was a talented surgeon with an asshole streak, winning fame and fortune through his work. But a car crash crippled his hands, ruining his career. He spent years looking for a miracle treatment that would fix him, and eventually wound up in Tibet. There he met the Ancient One, a... well, ancient person who taught him all about sorcery and otherworldly dimensions. Eventually, Strange would leave conventional medicine and his jerk ways behind and become the Sorcerer Supreme, Earth's master of magic and mysticism and one of its greatest champions.

Hey, wait a minute! I thought Doctor Strange's cape was red. That cape is blue. What gives?

Good eye! The cloak you see above is the first one he ever wore. His iconic red cloak, the Cloak of Levitation, debuted in '64. Apart from just looking cooler, it gives him the ability to fly without casting a spell.

Oh cool. So he has a bunch of cool magic stuff like in Harry Potter...

No. Not exactly. He doesn't use a wand or broomstick or anything like that, but he does use mystical artifacts that help him fight extra-dimensional evil. Apart from the Cloak of Levitation, Strange's other iconic mystical artifact is the Eye of Agamotto.

Bear with me here! So, in the comics, the Eye of Agamotto is a legendary object that has vast power over evil. It can shoot beams that weaken demons, see through illusions, and read minds. It's been passed down through the ages from one Sorcerer Supreme to the next, and it's one of the single most powerful items in existence.

Now, in the movie, Marvel Studios producer Kevin Feige has stated that the Eye can manipulate probability and time itself. That seems to suggest that it's one of the six Infinity Stones that Thanos, the Marvel Cinematic Universe's big bad, is currently hunting.

Whoa. Okay, question. What are the Infinity Stones again?

Here's an explainer for you.

Got it. So does that mean Thanos is one of the beings Strange is best equipped to take on?

Close. See, Doctor Strange is connected to what fans call Cosmic Marvel (which already includes the Guardians of the Galaxy) in a big way, and he'll almost certainly be a major player in the build-up to Avengers: Infinity War. If armed with all the Infinity Stones, Thanos would have the power to wipe out all life in the universe and beyond. Obviously, that's not something Strange could allow.

But Doctor Strange's personal villains have always been beings that don't live on our plane of existence. Classic Strange villains include fellow sorcerers like Baron Mordo (played by Chiwetel Ejiofor in the film), demons like Dormammu, and the Lord of Chaos, Shuma-Gorath.

Shuma-Gorath is a tentacled demon linked to Lovecraft's Cthulhu Mythos. He's an ancient, undying evil with ungodly power who keeps trying to make his way to our dimension to destroy it. The funny thing is, you've probably seen him already, but only in the Marvel vs. Capcom series.

That's a whole other thing, so let's not get sidetracked here.

Right right. Okay, so Doctor Strange is Sorcerer Supreme and one of Marvel's most powerful heroes. Got it. What about all this stuff about Tilda Swinton being in the movie and that making people uncomfortable? Tilda Swinton is straight up magical.

Sure. So Doctor Strange is very much a product of 20th century America's fascination with Asian culture. As a result, the narratives trade in a lot of Orientalist stereotypes. You have a white guy who goes to Tibet to find esoteric knowledge, and after learning all about mysticism and / or combat from a wise Asian man, is transformed into a great hero. It's the same kind of stuff that already informs Marvel's Iron Fist.

Marvel Studios almost certainly wanted to move away from that problematic history, so it cast Tilda Swinton as the Ancient One. But that's troubling because it inherently whitewashes the source material. Now, a few things: first, Tilda Swinton is one of the finest actresses working right now, so we at least have reason to believe she'll kill it; and second, Marvel should be lauded for casting a woman in such a prominent role with real power. But Marvel could have dug deeper to cast an actor or actress of color for the part.

We're gonna have to see how this plays out in the film itself to know how well Marvel handled it.

Okay I think I get it. I just have one more question.

Should I be worried about Benedict Cumberbatch's American accent? I dunno if I'm ready for it.

I'm not sure if any of us are. But by the Hoary Hosts of Hoggoth, I say we should have faith.

You took it too far, man.