Contrary to popular opinion, the smartphone world has been extremely interesting over the past year or so. Not only has the bar been raised significantly in terms of what to expect from our phones and their features, we’ve also been exposed to a wealth of new technologies, novel ideas on how to interact with our phones, and interesting accessories to expand what these pocket-sized computers are capable of.

But if you’ve taken the position that phones are boring, HTC’s new 10 might put another arrow in your quiver. It’s not that the 10 is a bad phone — it’s actually a very good phone — but rather the $699 10 is just a phone in a world where other smartphones are trying to be so much more.

With the 10, HTC is still riffing on ideas that have been around since 2013’s One M7. It is the logical result of four years of iteration on the M7’s groundbreaking aluminum design. The M7 was a good phone, and the 10 is surely better than any of the versions that preceded it — it’s easily the best phone that HTC has ever produced.

The question then remains: is being the best phone HTC has ever made enough anymore? I’m not convinced it is.

Back in 2013, most Android phones were garishly ugly and made of cheap-feeling plastics. Sized up against an iPhone at the time, it was easy to see which companies cared about design and which didn’t. HTC flipped that paradigm on its head with the One M7, which had an aluminum unibody and an attractive, minimalist design. It was easily the best-looking Android phone made up to that point, and it inspired many fast followers and copycats. 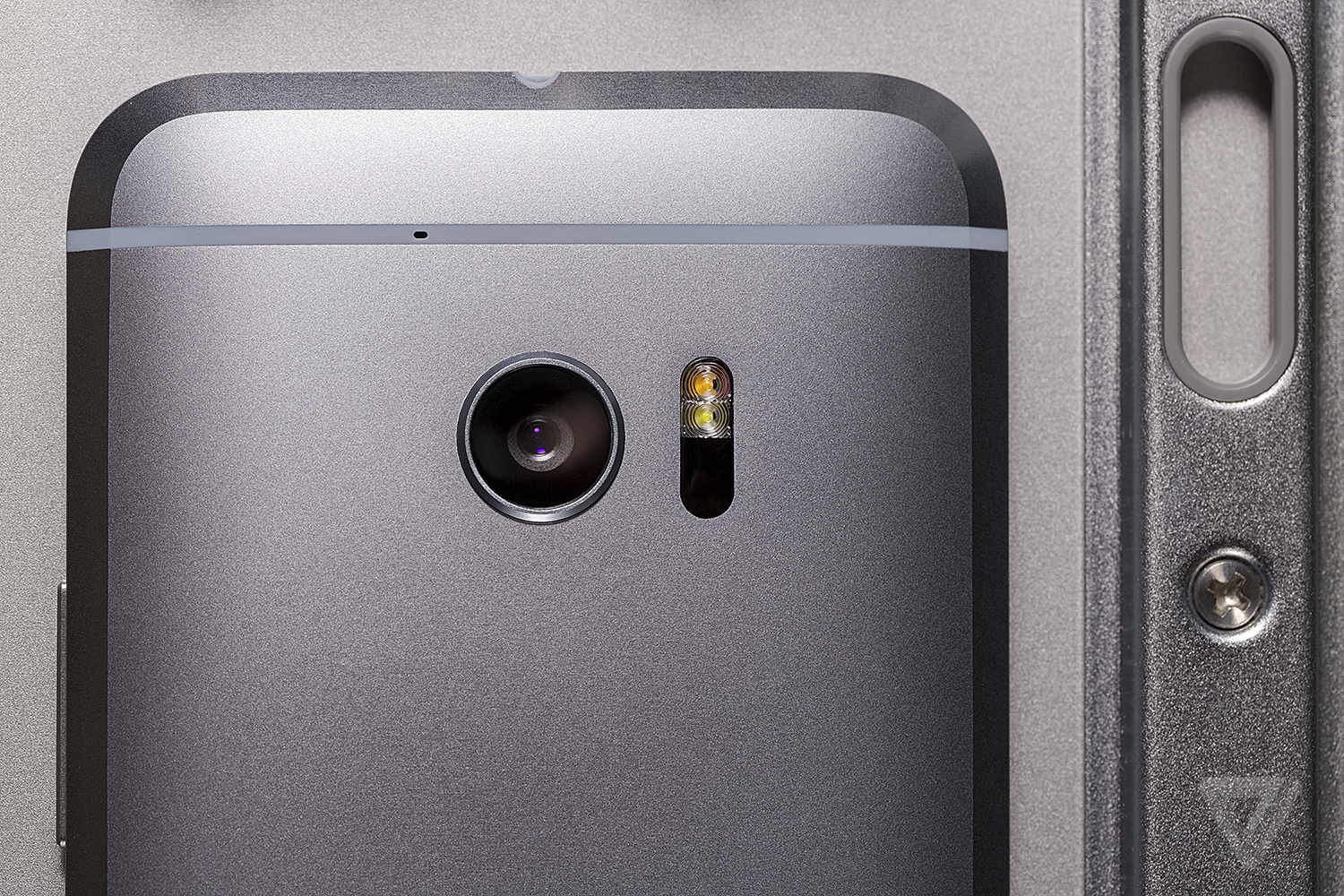 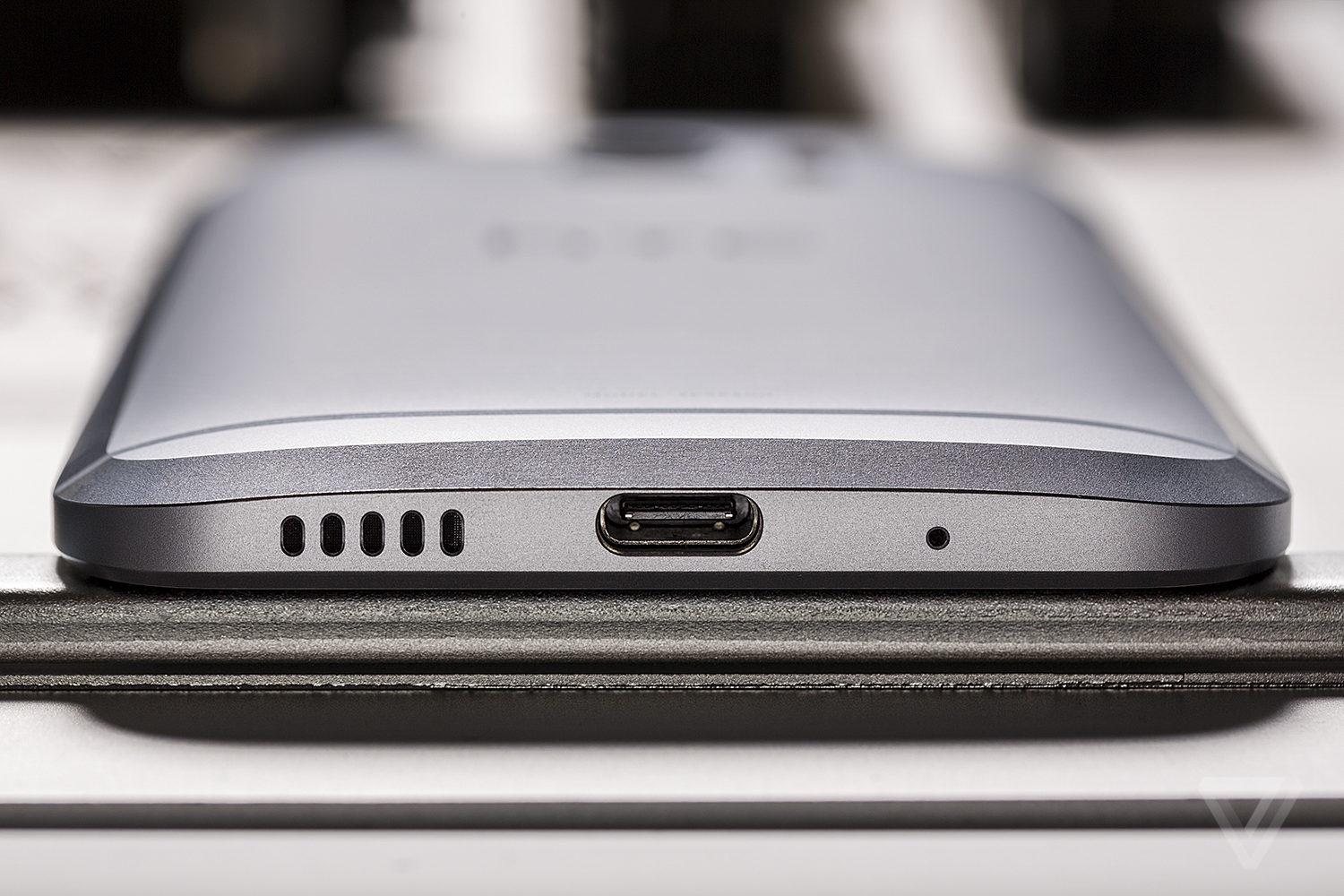 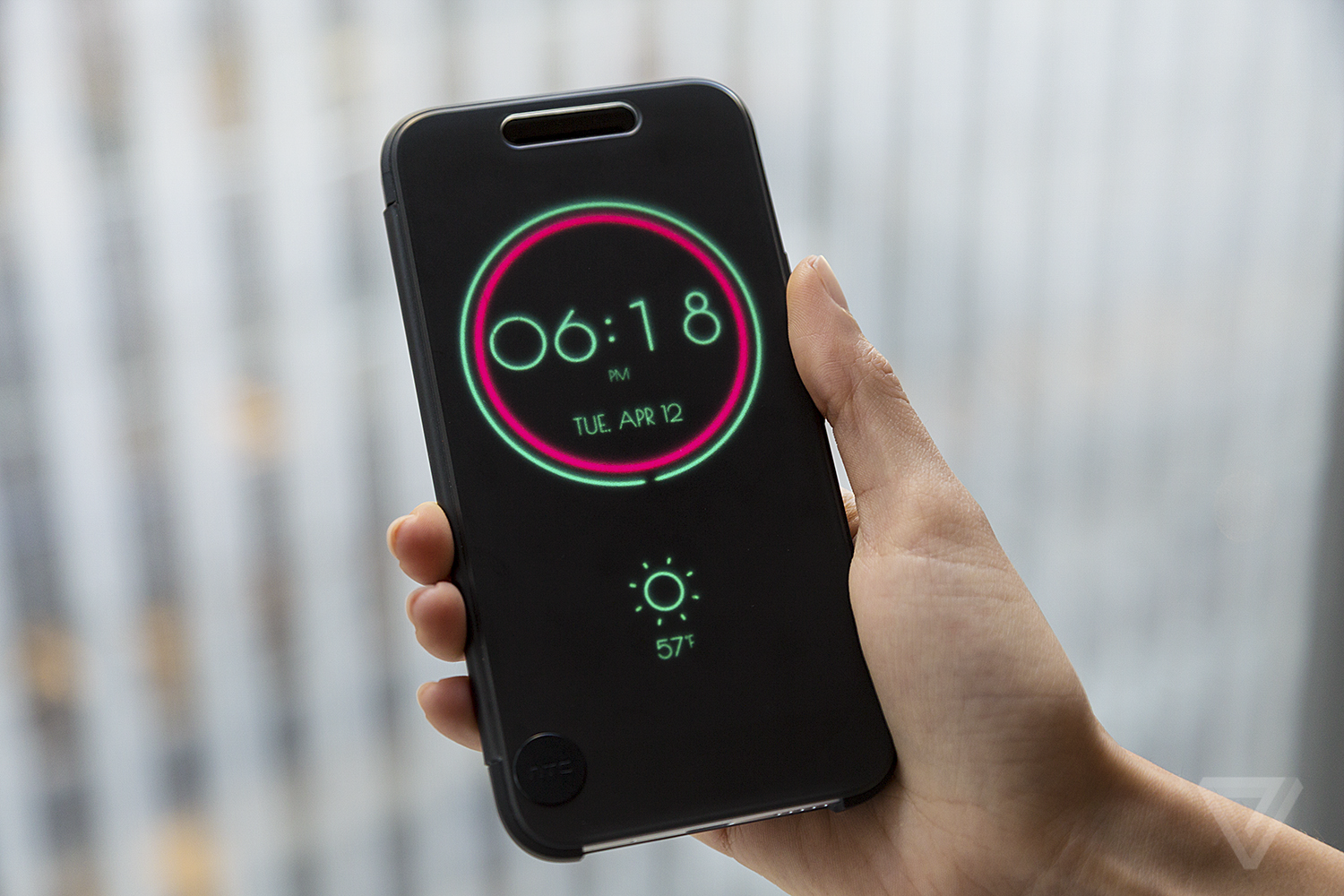 Fast-forward three years and four generations of phones and the 10 is still much the same. It’s an aluminum unibody phone that’s solid and very well made. HTC’s eliminated almost all plastic from the 10, save for two small antenna strips and a small cap on the top of the phone. The front is covered by glass that blends into the metal frame. HTC says the phone is especially durable and has withstood many drop tests, but I didn’t test this claim. It’s not, unfortunately, waterproof like the Galaxy S7, so you really shouldn’t get it wet at all.

The 10’s look is not an offensive design, but at this point it’s a bit generic and not very compelling.1 The most radical design element on the phone is the large beveled edge on the back, which says everything you need to know about how unexciting the 10’s design is.

I don’t mind the 10’s design at all, aside from finding it uninspiring. Others might feel differently: reactions to seeing the 10 for the first time in The Verge offices ranged from "really ugly" to "something you make as a prop when you need a generic phone on a TV set."

What you won’t find in the 10’s design are HTC’s signature dual front-facing speakers. Instead, the 10 has a tweeter in its earpiece and a woofer placed at the bottom edge of the phone, each with its own amplifier. The audio output of the 10 is loud and sounds good — I don’t really miss the stereo speakers here and it’s certainly competitive with other premium smartphones. The 10 also has great audio output from its (annoyingly-positioned-on-the-top-of-the-phone) headphone jack, and it can drive some seriously high-end headphones with ease.2 HTC has also built a tuning app that lets you customize the phone’s output to your ears and specific headphones, making up for deficiencies you might have in your own hearing.

If you’re buying the phone outside of the US, HTC is throwing in a set of in-ear headphones that sound really great. Unfortunately, if you’re in the US, it’s a bring-your-own-cans kind of deal.

Behind the edge-to-edge glass are a lot of table stakes features for a premium phone. There’s a 5.2-inch quad HD display that’s sharp and bright, but not quite as vibrant or eye-catching as Samsung’s screens. The 10 has a fingerprint scanner below the screen that’s used for authentication as well as a home button, and the other buttons — volume, power, capacitive keys for back and recent apps — work just like you’d expect them to.

The 10's design is best described as generic

The 10’s internal components will be familiar to anyone following high-end phones this year, as well. Its Snapdragon 820 processor and 4GB of RAM ensure snappy performance, and it has 32GB of internal storage with the ability to expand that via a MicroSD card. It’s a very fast and responsive phone: apps open very quickly and I haven’t been able to get the 10 to bog down once. HTC says it worked on both hardware and software optimization to improve touch response and performance and based on my experience with the device over the past week, I’d say the effort was worth it.

HTC says it has also worked hard to extend battery life on the 10, and it has no trouble getting through a day of heavy use for me. The 10 doesn’t have wireless charging, but its 3,000mAh battery can be recharged very rapidly through the 10’s USB Type-C port. HTC says the 10 can go up to two days between charges, which may be true if you’re a very light user, but it’s definitely not able to last that long for me. But I don’t have a problem with the 10 reliably making it through a demanding day of use, which it does.

The camera on the 10 is also a familiar tune: it’s a 12-megapixel3 unit with a bright, f/1.8, optically-stabilized lens and laser autofocus. It’s the best performing, most competitive camera HTC has ever had and it is capable of taking good pictures. Unfortunately, although it has similar specs to many other phones, it’s not quite as quick as Samsung’s S7 and it has a bad tendency to overexpose images and lose details in the highlights as a result. Coming from the downright awful camera on last year’s M9, the 10’s camera is a world of improvement, but it’s still not as good as the best phone cameras you can get. For the price HTC is charging for this phone, you should expect it to be better.

It’s interesting how virtually all of the high-end phones have 12-megapixel cameras now, likely because that’s the largest resolution currently available with the large pixels that work well in low light.

The front camera has also been majorly upgraded with a new, optically stabilized lens (a first for any smartphone). It can take sharp selfies and video in low light, which, for a lot of people, is probably more important than the back camera’s capabilities. 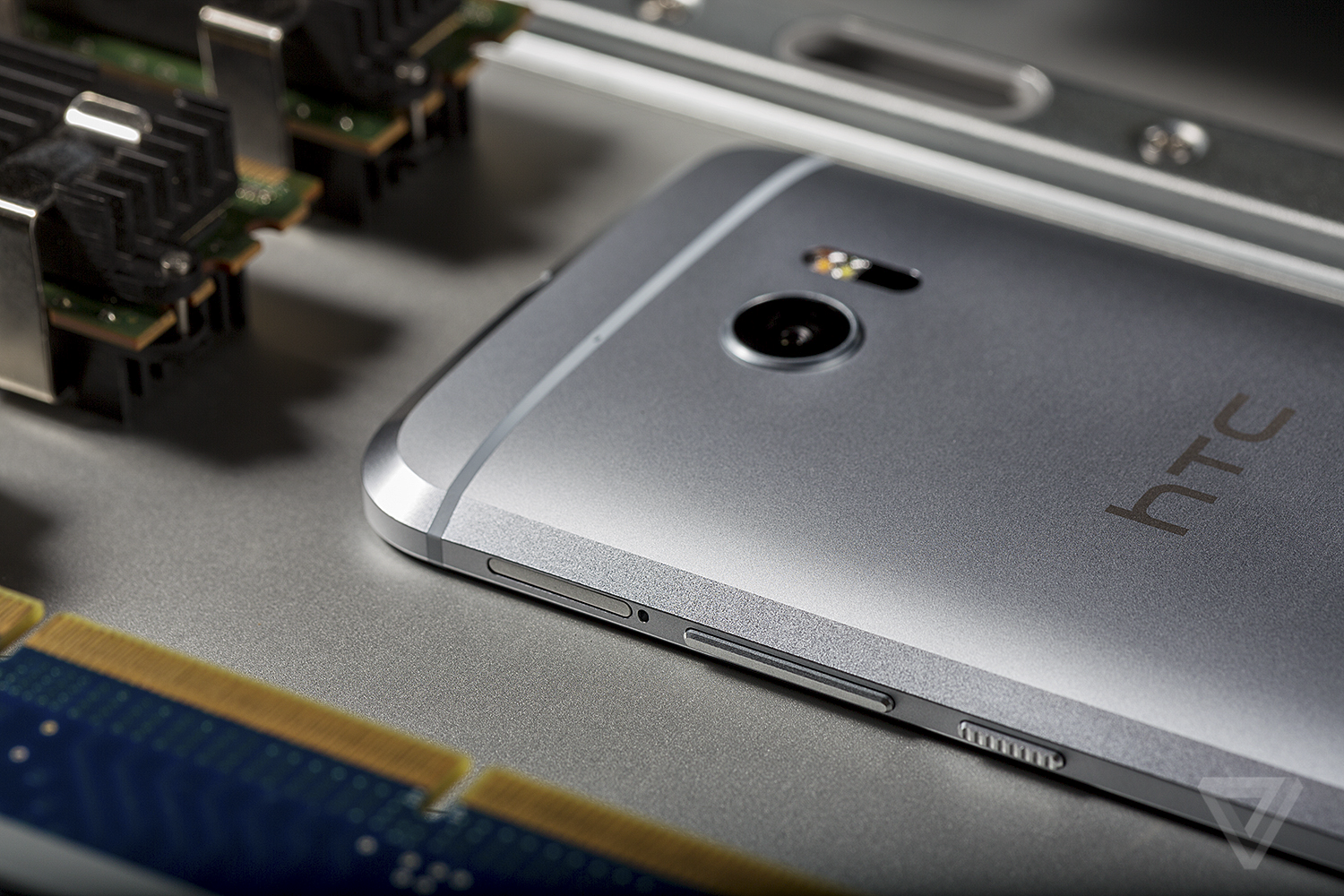 I think the most impressive part of the 10 is found in its software. Where older HTC models were burdened by duplicate apps, heavy skinning, and odd interface choices, the 10 has one browser, one calendar app, one music app, and so forth. Many times those apps are Google’s, not HTC’s, and the company has made efforts to design its own apps around Google’s Material Design directives.

HTC should be applauded for its software restraint

HTC has toned its system interface customizations so much that the 10’s interface is largely indistinguishable from the version of Android that Google ships on Nexus phones. It’s attractive to look at and easy to use, and makes switching from a Nexus device to the 10 a much more pleasant experience.

These efforts have also made the overall software experience on the 10 much more cohesive than on most Android phones. HTC’s adherence to Google’s guidelines make it so I don’t feel like I’m using software that’s been designed by two different teams when switching between apps. And since there’s only one app installed for most major features by default, I’m not forced to choose between multiple options when I’m setting up the device.

Unfortunately, this experience will not likely be as nice with carrier branded versions of the 10. I’ve been testing the unlocked model HTC is selling directly, but once Verizon, Sprint, or T-Mobile customize it with their apps and software, a lot of the work HTC has done will likely be lost. (AT&T has opted out of selling it.)

If you do want to customize the look of the software, HTC’s theming features have been extended with stickers and a "freestyle" desktop that lets you place widgets and shortcuts anywhere on the screen, as opposed to locked to a grid. This is fun, but not particularly useful if you use your phone as a productivity tool like I do. 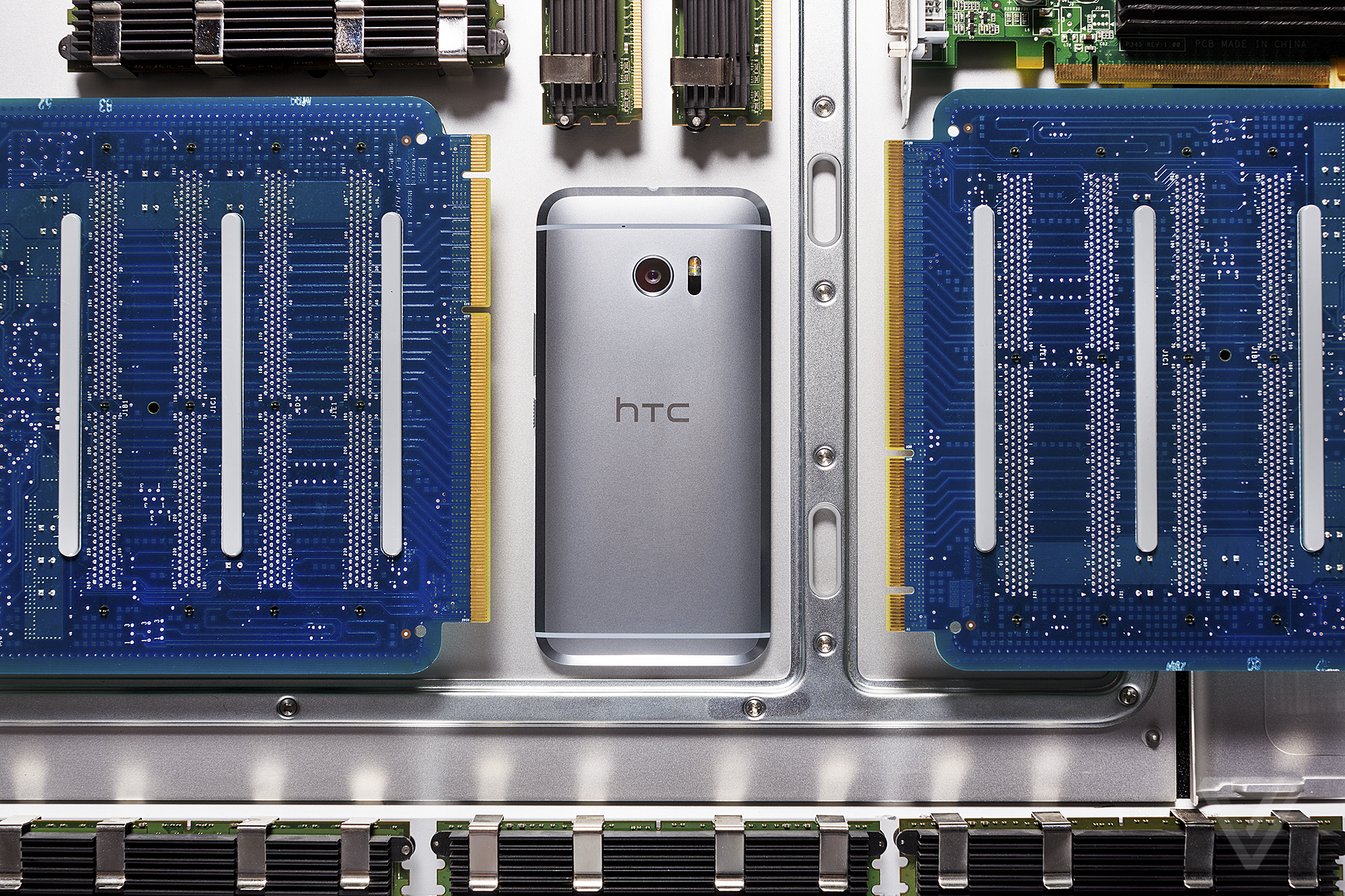 Impressive restraint with the software aside, I’m still finding it hard to get excited about the 10. Overall, there’s little to complain about with it: it’s a well-performing, well-made phone that does all the things you expect a phone to do with ease. It’s fast; its battery lasts all day; its camera is good, if not quite great; and its software is the best you can get on an Android phone outside of Google’s Nexus line.

But the problem for HTC is that there are a lot of phones available now that are fast, have great cameras, reliable battery life, and nice software. It’s not enough to just do these basic things well to stand out in this exceptionally competitive field. Other phones offer accessories that extend the phone’s capabilities (Samsung), or sell for hundreds of dollars less (Nexus 6P), while still hitting the basic marks of good performance, good battery life, and a good camera.

The 10 just doesn't stand out in a hugely competitive field

With the 10, HTC has done what it’s very good at: making a well-made smartphone that excels at all of the things you want a phone to do. Again, it’s easily the best phone that HTC has ever made.

Give HTC a trophy of participation for making a phone that actually competes in the big leagues this year. But then give your money to somebody else, because you can get more for your dollar with an iPhone, Galaxy, or Nexus.

$699.99 at Best Buy
Most Popular
From our sponsor
Advertiser Content From