Microsoft is bringing its excellent Windows Phone keyboard to the iPhone. The software giant first revealed its plans to bring Word Flow to iOS back in January, but a new sign up page has revealed that beta testers will be able to access the keyboard soon. Just like the Windows Phone keyboard, the iOS version will let you tap or swipe to type out words, and intelligently predict words for sentences.

While the Windows Phone version is baked into Microsoft's OS, the company is bringing two new features to the iPhone equivalent. You'll be able to customize keyboard backgrounds with your own image, and there's even a one-handed mode. The one-handed addition is the most interesting change, allowing you to swipe and tap out words by moving the keyboard to the side in an arc shape.

Microsoft has been experimenting with a variety of keyboards for iOS and Android recently. A hub keyboard originally debuted on Android, and arrived on iOS last week to let users quickly access files and contacts directly from the keyboard. Microsoft also acquired Swiftkey back in February, so it's clear the company is focused on testing a variety of cross-platform keyboards to find the perfect balance of features. If you're interested in testing Word Flow for iOS, Microsoft is accepting sign ups for the beta at the company's Garage site. 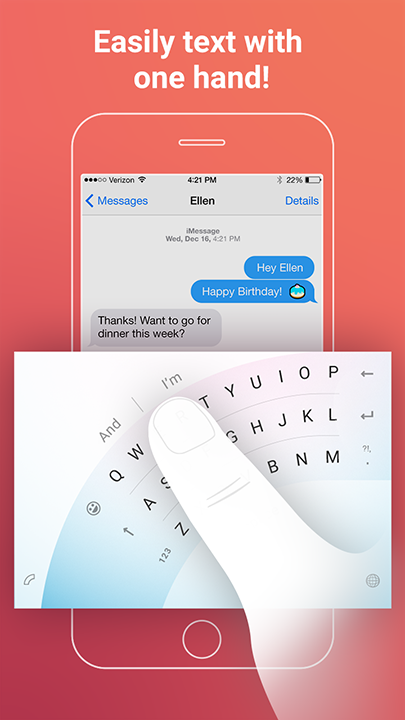