Droids in Star Wars films have always seemed to me to be an underused concept. They're incredibly sophisticated machines: sentient, self-aware, and capable of displaying the whole gamut of human emotions. And on-screen they're portrayed either as mindless bots (see: battle droids, astromechs, etc.), comic foils (R2D2 and C-3PO), or menacing inhuman terrors (General Grievous was technically a cyborg I guess, but there's IG-88, too). But the recently-released one-shot comic Star Wars: C-3PO #1 has made me rethink my idea conception of Star Wars' droids.

The comic is ostensibly about why C-3PO shows up with a red arm in The Force Awakens. In the film itself, C-3PO just explains the incongruous paint job with a single, typically feeble one-liner. The comic, though, offers much more detail. It explains how C-3PO and a group of Resistance droids crash land on a planet along with their captive, an RA-7 protocol droid named Omri that belongs to the First Order. The humans are all dead, but Omri knows the whereabouts of the kidnapped Admiral Ackbar, and the droids need to make their way to a nearby distress beacon to relay this information. 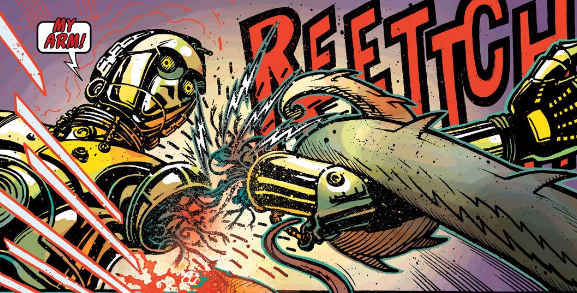 As they move across the planet, the droids are picked off one by one, each of them sacrificing themselves to save the others. One droid is ripped apart by spice spiders, a second sucked into a inky-black river, a third carried away by a swarm of winged insects, and C-3PO itself has its arm ripped off by some sort of tentacled beast. During their journey, Omri and C-3PO chat about the nature of droid existence and about whether their fellows died simply because they were programmed to. The First Order bot bemoans what it calls the "curse of protocol droids" — burdened by the extra sentience needed to carry out their duties.

Omri discusses how its memory and character have been rewritten in the past, and how it is troubled by flashes of its previous lives. C-3PO says it, too, has barely legible memories ("Rocks... A factory of droids... An arena, in the middle of a battle."), but adds that it accepts "it is a droid's lot in life to be in service of its master."

Eventually, only Omri and C-3PO are left, taking shelter from a downfall of acid rain only meters away from the distress beacon. Omri volunteers to venture out into the open to activate the device, transferring the location of the kidnapped general to C-3PO before it dies. The drone steps outside and the rain strips away its body, reveals that under its shiny, black exterior, there's a coating of red paint — tangible proof of one of its past lives.

The beacon activates and C-3PO is rescued, but the bot takes the dismembered arm for itself in memory of Omri. The last panel shows C-3PO looking out the window of its rescuing ship, looking at the ghosts of all the droids that sacrificed themselves for the mission.

It's a simple and affecting piece of storytelling, and explains a lot more than just "why C-3PO has a red arm." In fact, it raises the sort of questions about artificial sentience and memory that are largely skimmed over in the Star Wars films, but that have been rich sources of storytelling in other sci-fi universes. It's sad to think about droids having these potentially rich inner lives that are sidelined by humans — both within the Star Wars universe itself, and in how Lucas et al. have tackled the films. (The Star Wars expanded universe is a different matter.)

And oddly enough, the ending of Force Awakens emphasizes these themes, although perhaps unwittingly. In the film's final scenes, C-3PO is shown standing with the rest of the victory party, the bot's once-red arm painted gold once more. It seems a self-aware protocol droid like C-3PO can't hang on to its memories for too long.

Sphero watch lets you control BB-8 with your wrist