Since the Wii U launched in 2012, Nintendo has done a very bad job at explaining why anyone would want to hold a giant plastic tablet instead of a regular game controller. Sure, the console has some amazing games — Mario Kart 8, Splatoon, and Super Mario 3D World to name a few — but, with the exception of Super Mario Maker, none of them have made the case for Nintendo’s weird Gamepad. It has rarely felt like a necessary feature. Star Fox Zero, which launches this Friday, is one of the company’s last real chances to show the largely untapped potential of the Wii U.

It’s a modern reboot of the classic, arcade-style sci-fi shooter — with a premise that feels sort of like Star Wars if Luke and Darth Vader were anthropomorphic animals designed by Jim Henson. And while it has a lot of great ideas, particularly around the concept of second screen gaming, the new Star Fox ultimately falls flat thanks to an over reliance on motion controls. Star Fox Zero is a game about flying and shooting, and when one of those aspects doesn’t work, well, neither does the game as a whole. 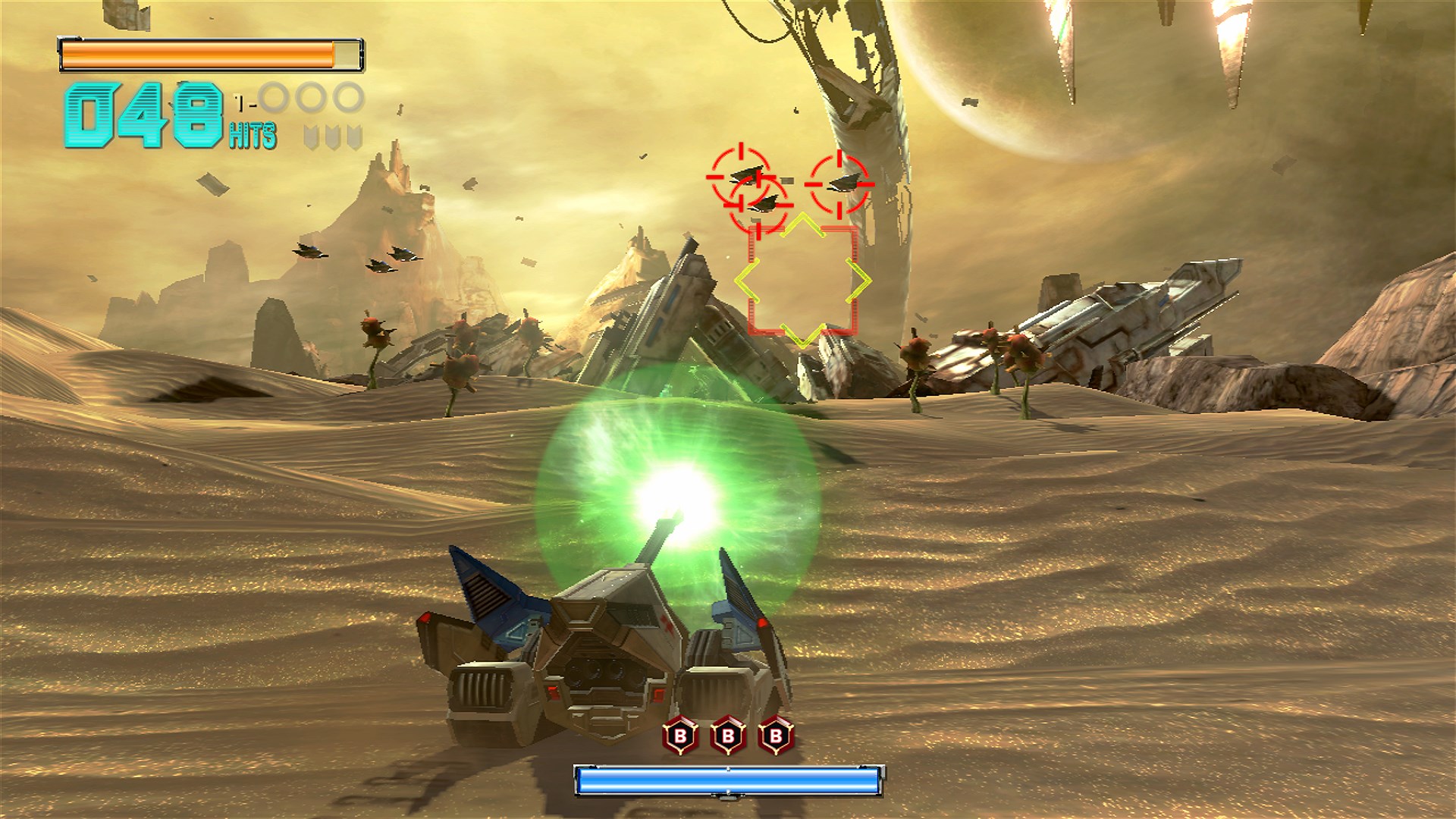 Things start out promising. The opening moments of the game put you in the cockpit of the iconic Arwing fighter, a nimble spaceship that blew everyone’s mind when it appeared as a 3D model in the original Super Nintendo game. You’re speeding across a beautiful ocean scene, like an X-Wing in The Force Awakens, heading toward a battle raging in a futuristic city. It’s impressive to look at — the game’s retro-futuristic sense of style definitely translates well on a modern console — and moving the ship around feels fast and fluid. But the problems start almost immediately after you reach that exciting battle.

Zero’s controls are unique in a few ways. For one, there’s the way you view the world around you. The TV in front of you displays a typical third-person perspective, letting you watch the Arwing as it glides around. But if you look down at the screen on the Gamepad you’ll see something different, with a view that puts you directly in the ship’s cockpit. Each view serves a purpose. I found myself primarily looking at the TV when I was focused on navigation, as it gave me a better view of my surroundings. The in-cockpit view is much more claustrophobic, but it’s also better for aiming, since you can see your targets up-close.

It’s a clever idea, but in practice it can be a bit jarring to switch back-and-forth constantly. I never quite got used to it during the eight hours it took me to finish the game. The multiple viewpoints aren’t the real problem with Star Fox Zero’s controls, though. While the game has you moving around with the left control stick, aiming is controlled entirely through motion. In order to pinpoint an enemy, you need to hold the Gamepad up and point it in that direction. It’s awkward and imprecise, and it makes playing the game for prolonged sessions physically painful. After I defeated the final boss my hands felt like claws.

There’s a chance that this control scheme would be passable if you only flew the Arwing in the game, and thus had lots of time to adapt to the suboptimal aiming. But Star Fox Zero isn’t content to just have you fly a starfighter. Instead, nearly each stage drops you in a new kind of vehicle, including a tank, a sort of mini-Helicarrier, and a mech suit that looks a bit like a giant mechanical chicken. Each one controls slightly differently and has its own distinct feel. While the Arwing is somewhat tolerable in the way it handles, it felt to me like the vehicles became increasingly more cumbersome as the game progressed. The tank, in particular, is an absolute chore since it’s essentially unplayable if you’re not using the cockpit view. This, in turn, means you have a very limited view of your surroundings, which is not ideal when you’re in a large-scale battle and being attacked from every direction. 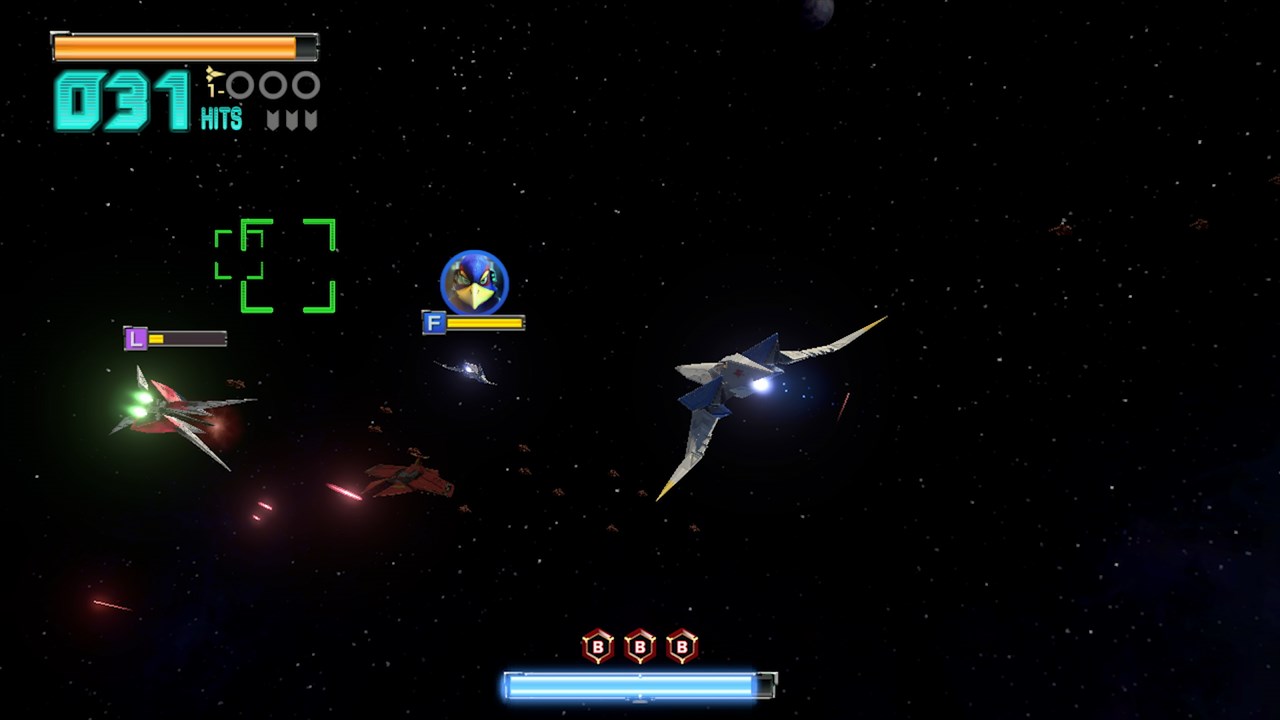 The cumbersome controls are compounded by the fact that Star Fox Zero isn’t exactly an easy game. In many levels health pick-ups are few and far between, meaning you need to both avoid enemy fire and efficiently take out bad guys at the same time, while moving through levels at a rapid speed. The motion controls simply aren’t up to the task. The game also has the unfortunate habit of using cinematic camera angles, particular during boss battles, that look cool but make it even harder to control whatever vehicle you happen to be piloting. (If you fail a mission multiple times the game will give you an optional invincibility power-up, which I am not ashamed to say I used to finish the final, incredibly tedious boss fight.)

These issues are all the more frustrating since there is clearly a good game hidden in Star Fox Zero. The levels are huge and gorgeous, spanning standard sci-fi locales like ice planets and donut-shaped space colonies, while the boss battles are truly epic in size. Zero absolutely nails the sense of scale; it really feels like you’re piloting a tiny ship against massive creatures like a robotic sand worm or a lumbering sci-fi gorilla. I even like some of the second-screen additions. Midway through the game you get access to a robot that can hack enemy computers, and when it’s deployed the second screen shifts to show the robot’s point of view. It’s clever and useful, and I wish more of Star Fox Zero was like that.

Perhaps the worst thing about the game is that the biggest issue — the one that ruined the experience for me — seems like an easy fix. I really can’t think of a single reason why you can’t use the right stick for aiming, which would make things both more precise and more comfortable. Nintendo, as it so often does, has stuck to its guns, and made motion controls the focal point of the game, despite the fact that they don’t work well.

In a lot of ways Star Fox Zero is emblematic of the Wii U as a whole. The two share a lot in common: both have a lot of potential and some clever ideas, but are ultimately hampered by a handful of bad decisions. The game has almost everything I want from a modern Star Fox, with gorgeous visuals, a variety of ships and missions, and even the charming cringe-worthy dialog of past games. But when it’s not fun to play none of that really matters. Just like the Wii U, I really want to love the new Star Fox, but it doesn’t make it easy.

Star Fox Zero is available on the Wii U on April 23rd.