This new Adam Sandler movie looks like it could be okay, or even fine!

This new Adam Sandler movie looks like it could be okay, or even fine!

When Netflix announced plans last year to produce four Adam Sandler films, the motivations for the actor and the studio appeared obvious. Sandler would continue to treat his productions as lavish vacations for family and friends, and Netflix would attract enough new subscribers to justify funding riskier awards-bait from directors like Cary Fukunaga (Beasts of No Nation, True Detective) and the Duplass brothers (The Puffy Chair, The Overnight).

Sandler's first film, The Ridiculous 6, seemed to confirm that speculation. The film has a zero-percent rating on Rotten Tomatoes, and one star out of five on Netflix's own user-submitted rating scale. You can condense the problems with Western parody to this single GIF, in which Chris Parnell is blasted off his feet by pressurized horse diarrhea.

Netflix published the first trailer today for the second Sandler film, The Do-Over, and I clicked play with a healthy dose of skepticism. You can judge the footage for yourself.

Yes, the trailer has all the hallmarks of a modern Sandler film. Let's review:

Does this look like an excuse for a production company to fund a tropical vacation for Sandler and friends? Yes.

Does the film appear to have easy, tasteless jokes? It sure does.

Does it have the visual complexity of a direct-to-video National Lampoon comedy? Mhmm.

So why do I kind of, sort of, definitely want to give The Do-Over a chance? I have a few theories, of course.

The film's star isn't Sandler. He doesn't even appear in the trailer until the 45-second mark, when David Spade gives him eyes that say, "Why are you here? Things were going so well!" And Sandler's eyes respond, "Where's craft services?" 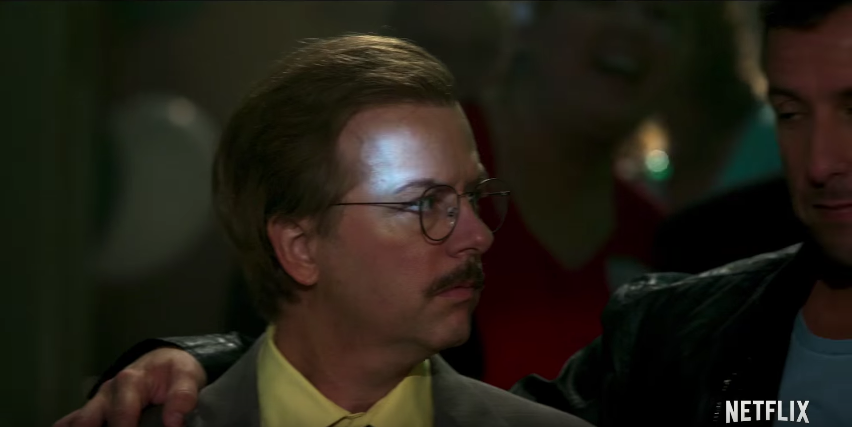 David Spade is the lead. David Spade is also the most underrated alumni of Saturday Night Live who isn't named Chris Elliott. The comic has made many very mediocre films and television shows. He also helped to give the world Tommy Boy, Black Sheep, PCU, and most importantly, The Emperor's New Groove.

3.) A full minute of not feeling complicit in something terrible

Over 60 seconds pass without a joke being made at the expense of the elderly, women, people of color, or unattractive people. David Spade does get punched in the stomach, but lol.

Sandler may never be woke; the least he can do is be awake — something he's struggled with in recent films. In the trailer I would give Sandler a 7 / 10 on the wake scale. He almost looks like he wants to make this movie.

5.) The return of the action-comedy

This movie looks like Bulletproof, Fled, and those other R-rated action-comedies of the 1990s that are rarely made anymore — except for the 21 Jump Street series and the films of Shane Black.

6.) My personal desperate cling to the past to repress the pressures of adulthood

I was a teenage Sandler fan. Where other, smarter peers recited the works of great poets or mindful philosophers, I quoted the lesser moments of Billy Madison.

I want to like Sandler movies again. I've changed and he's changed. Maybe the two of us may never meet. In this trailer, though, I can almost make out a path to our reuniting.

I suppose that's the pleasure of this Netflix deal for us lapsed Sandler fans: what do we have to lose. I don't have to buy a ticket or drive to the theater. I'll just hit play, and if The Do-Over loses me, I'll return to the main menu, where a hundred other options await.