Mazda's future is hidden in these completely mad vintage racecars

With all of 155 horsepower, the Miata MX-5 leaves two squiggly rubber smears imprinted on the asphalt as I peel out on a quiet two-lane road somewhere south of San Francisco. The new Miata is the least powerful sports car I’ve driven in years. But with its hand-operated soft roof, manual gearbox, and Mighty-Mouse-esque four-cylinder engine, it's the little hornet that could: a tiny body and a hell-bent attitude.

No modern automotive brand is more underrated than Mazda. While the sales volume goes to brands like Toyota and Honda, I often recommend Mazda to friends who are looking for economy, coherently designed interiors, and genuine driving fun. The MX-5 and Mazda 6 speak perfectly to the brand’s DNA, but even the CX-5 crossover is more entertaining than it has any right to be.

That DNA is what has prompted this Miata-powered road trip from the San Francisco airport to the Monterey Peninsula, and one of my favorite racetracks, Mazda Raceway Laguna Seca.

This is The Harper Spin, a weekly column from seasoned auto critic Jason H. Harper. He’s raced at Le Mans, crushed a car in a 50-ton tank, and now, he’s bringing his unique style to The Verge.

Mazda has sponsored the world-famous track for 16 years to highlight an often-overlooked reality: Mazda is a racing brand. In the US, there are more Mazda racecars or Mazda-powered racecars competing any given weekend than any other brand, including Porsche and BMW.

They’ve been at it a long time, with racing cred dating from the early 1970s all the way up to winning the 24 Hours of Le Mans in 1991. Le Mans is the big boy of endurance racing, and Mazda is the only Japanese manufacturer to ever take the prize, using a sophisticated rotary-powered prototype.

The rotary engines are gone, as are the prototypes. These days you’re more likely to see a racetrack-ready Miata competing in any number of amateur series worldwide. Indeed, a brand-new 2016 MX-5 Cup car is waiting on the track for me right now. At a starting price of $53,000, it may be the least expensive competition-worthy racecar in the world.

But it is accompanied by five other cars which have been trucked in from a semi-secret basement garage in Mazda’s Irvine, California headquarters. Each is a historically significant racecar from Mazda’s history, from a homely and road-weary 1970s coupe all the way up to the type of sophisticated prototype that won Le Mans.

Mazda execs have promised to show me the brand’s DNA in the most visceral, terrifying way I can imagine, using millions and millions of dollars worth of high-horsepower — and highly fragile — machinery on the famous racetrack which they sponsor. 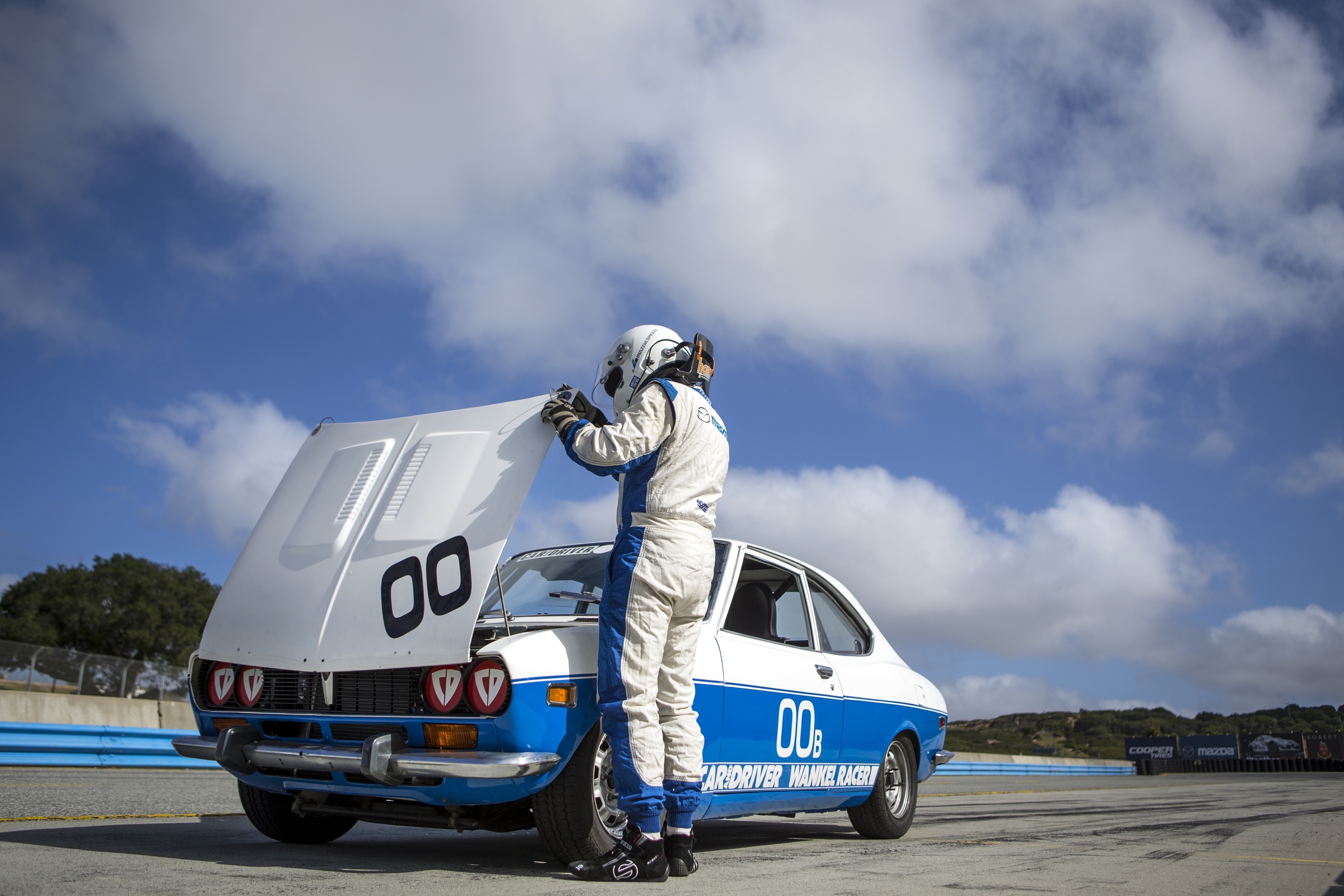 Does all this racing stuff translate into the actual production cars? I’d argue that it does. Mazda splits its design, engineering, and development teams between Japan and California. In America, a lot of the key staff also race. They wrench on their own cars and spend a lot time thinking about how a car should move. Get into the new Miata and take a corner and its tautness and fluidity speak to that.

I’m no racing scholar, so the vintage cars lined up in Laguna’s garages mean little to me by name. But one look at the savage-looking hardware and I get the sweats. These five cars are mostly swoops of folded fiberglass over tubular frames, with classic rotary engines shoved deep inside their bodies. They were all competitive in their time, and they’re all pretty damn fast even today.

There’s a 1972 RX-2 which looks basic, but is the loudest car I’ve ever heard. (It is the No. 00B car in the photos.) Editors from Car and Driver used to race it, which explains the rampant hearing loss I noticed when I met the magazine’s old-timers years ago. From there it steps up to 1989 IMSA GTU MX-6 (No. 37) and 1991 IMSA GTO RX-7 (No. 62). They have long snouts, rotary engines up front, and big wings. I'm told that they are manly, mean things, and they need a firm and aggressive hand to keep them in check.

But one car calls me to like no other. The No. 77 is a silver dart and it goes by the name of the RX-792P. The prototype was crafted of early carbon fiber and raced for only one year, 1992. I gaze upon it and swoon. It is a Buck Rogers Starfighter with grafted-on, golden-rimmed wheels. It has a literal cockpit, with a tiny hinged window into which you cram your body inside so you can slip into the single right-side seat.

The RX-792P has the biggest damn carbon-fiber rear wing known to man. "That wing alone costs about $40,000," one of the Mazda engineers says. "And we don’t have a replacement." The car weighs less than 2,000 pounds and has about 750 horsepower out of its large rotary engine (located behind the cockpit). The big wing lends more than 700 pounds of downforce. It is a very serious machine. 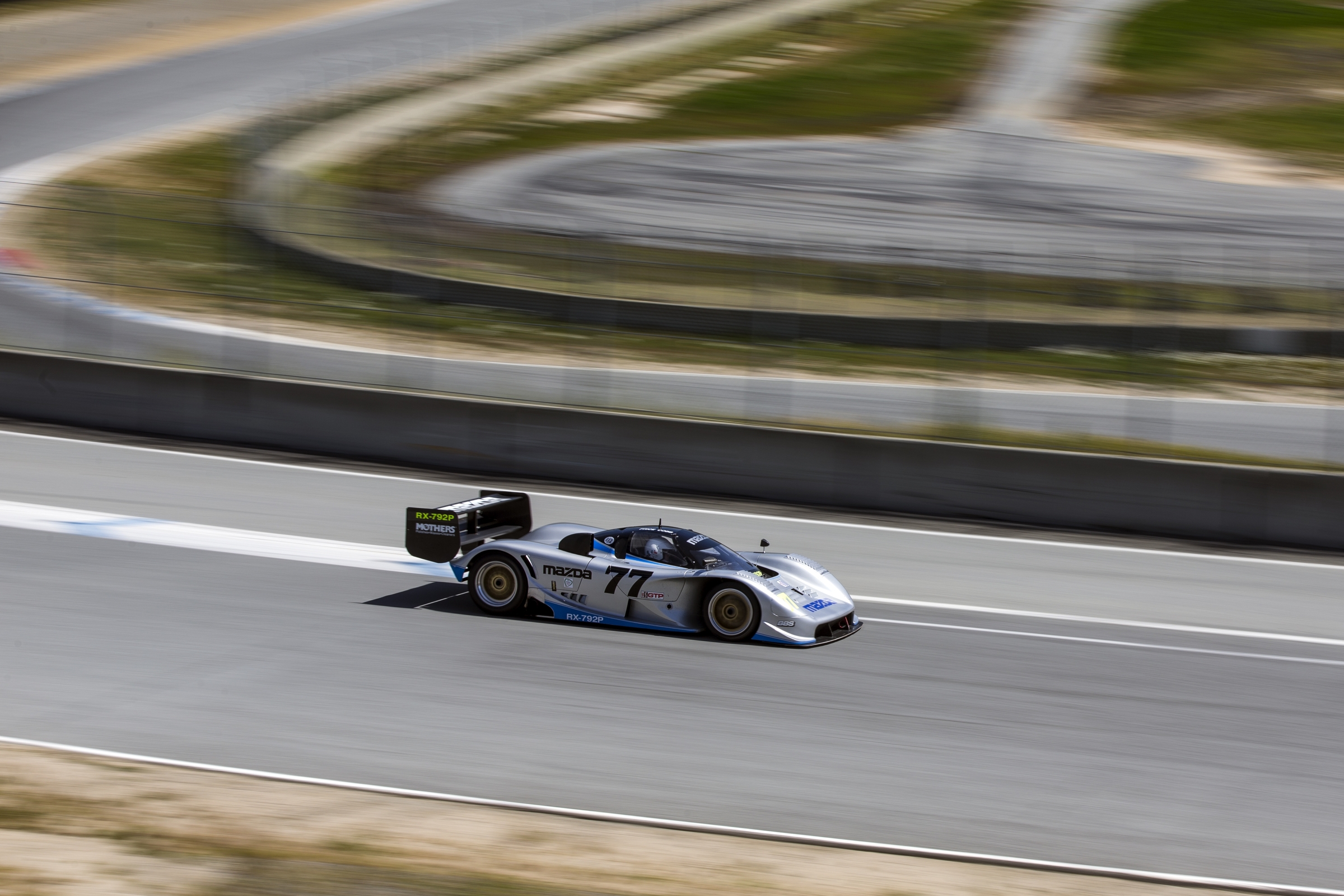 "Are you really sure you want me to drive all of these?" I ask Jeremy Barnes, the director of PR. He waves off-handedly. "You’ll be fine." Jeremy races the gnarliest car of all, the GT0 RX-7, here at Laguna Seca during the annual Pebble Beach historic races. I’ve watched him take on faster cars and pro drivers, and he’s competitive, running down the opposition as the Mazda’s side pipes shoot out flames.

Meanwhile I’d spent the previous night having turbulent dreams about mishandling the old, tricky transmissions: vivid images of rocketing down the track at 130 mph and going for fifth gear and mistakenly putting it into third — an easy way to blow up a very expensive historic motor.

Driving a vintage racecar ain’t easy. They were built on string budgets with overworked teams who never had enough time. They are fragile and temperamental and engineers packed as much power into them as possible. Nobody expected them to last beyond a season. Transmissions were weird and balky, brakes iffy. Fires were not uncommon. And of course there were no such things as traction or stability controls.

The upside? These cars here are in as good of a condition as they were when they were new. Current employees maintain the historic fleet. And they’re also are the ones who get to drive, race, and pit crew on them. The fleet is used as both an incentive and a way to pass on the company DNA — kind of like a mother dough, transferring the starter yeast from generation to generation.

I warm up in the brand-new MX-5 Cup car. It has no roof, just a roll cage, and looks similar to the regular Miata except that all the creature comforts have been removed, replaced by a fire extinguisher and five-point harness. It is bliss to run it around Mazda Raceway. I could drive it out here all day long and never get tired.

But I have other vehicles to abuse, and I cycle my way through the vintage cars, trying to work out the byzantine starting procedures and the maddening manual transmissions. How byzantine? Well, you start the GTO like this: turn on the master switch, flip the secondary ignition switch on and off three times, and then count to 15 as you mash the gas pedal down. Wait another 15 seconds and then actually turn the car on. Again, that’s just to get the car running. 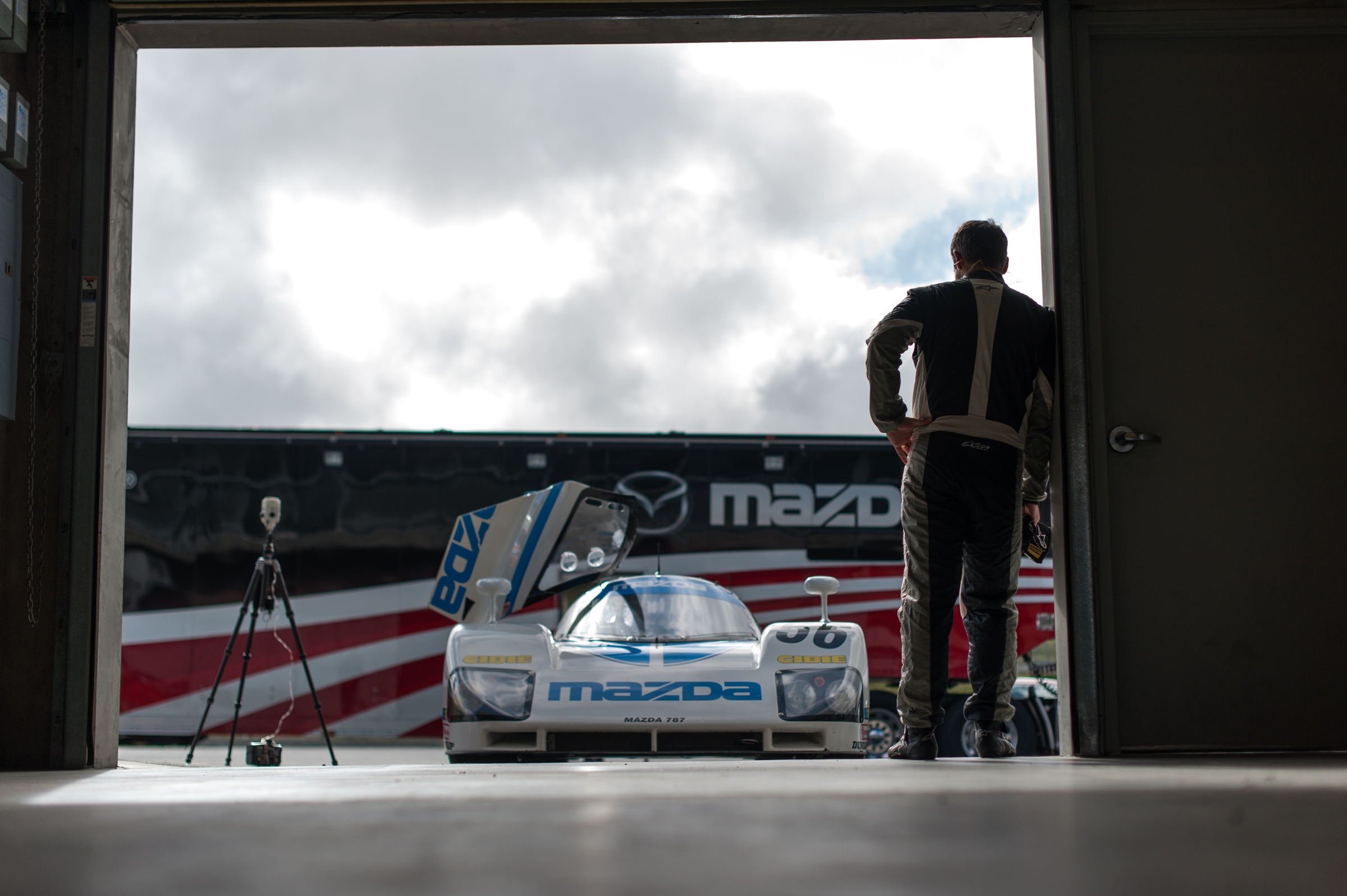 I drive three of the cars and am delighted. But when I actually drive the GTO, the car that Jeremy races, I am an abject failure. The five-speed, dog-leg, dog-box manual transmission is the Clutch of Evil. You have to ram it into each deeply recalcitrant gear, using all the brute strength of He-Man, but somehow maintain the exact and delicate positioning required of a game of Operation. All the while trying to keep it pointed the right way down the track and not let the back end kick out and put you into a death slide. After much embarrassing grinding of gears, I slink back to the pits. The GTO has won.

But the object of my desire, the silver RX-792P prototype, is waiting. Before my nerves get the best of me, a Mazda man shoves me inside and slams the miniature scissor door down upon my helmet. My head is scrunched down and my neck torqued and the belt is cutting into my groin. Before I know it, I’m out of the pits and onto the track and I mat the gas pedal and the car just flies.

The four-rotor engine behind my head sounds like something akin to a 12-cylinder under full attack. It hisses and screams. Imagine a pissed-off Gorgon with each of the snakes on her head going wild, and you’re getting there. The dog-box transmission is wonky but manageable, and every time I shift from second into third gear it feels like the car has taken a massive huff of nitrous oxide. I’ve driven modern prototype racecars before, but the naked speed of this 24-year-old Mazda warps my perception.

In fact, just how does one describe speed? You might just as well try to accurately describe being drunk. It’s easy to describe the effects: the stumbling and the slurred words, but it doesn’t really get at the blurred essence of imbibing too many martinis. My time in the prototype yields a bit of the same high-octane, perception-altering buzz. So rather than try and explain the sense of speed, I’ll say this: I feel like a piece of the car, one of its stress-bearing components, and thereby intrinsically linked to the looping, twisting track. The big wing and aero bodywork push the car into the ground, allowing me to go even faster, reinforcing the feel of being part of the car. It is a self-feeding loop, and I’m not sure where the limits are, but I never got close.

How long can any such session last? The brain fatigues more quickly than the engine components or the rubber on the tires. I get in two long sessions and when I finally exit out of the miniature trap door, awkwardly, I simply exult: "This car is everything."

Is it crazy to imagine that there is some connection between the priceless RX-792P and a $29,000 MX-5 Miata Club? My intellect would say that it is, but the next morning I’m back on my way to SFO, on yet another curvy road, and I’m gliding by BMWs and Porsches in my lithe and willing MX-5. It is uncomplicated, and it is great fun. And whether you’re racing vintage cars or just out for a Sunday drive, having fun is the whole damn point.