Triby Review: Alexa on your fridge

Don’t buy one (I bought one)

The elevator pitch for the Triby is actually a kitchen pitch. 1. Take everything you like about the Amazon Echo speaker (including voice activation) and stick it into a portable Bluetooth speaker. 2. Add some physical buttons for shortcuts to your favorite radio stations or Spotify playlists. 3. Put an e-ink screen on it so you can receive messages from your family. 4. Stick it on the fridge.

It's the archaic '90s dream of the "family communication gadget," but recreated with 2016's technology. It's Alexa, with everything but the kitchen sink thrown at it.

But the Triby is not made by Amazon, which deserves credit for creating the most important thing in both audio and personal assistants in the past year. It's not just that the Echo speaker was a surprise hit, it's that Amazon has taken that success and is rapidly doing everything it can to turn its Alexa personal assistant into a phenomenon. One of the things it’s done is open up Alexa for any and all to play with. That means we're getting all sorts of software features and it means other companies can make gadgets that incorporate Alexa. One of the first is Invoxia, who before now mostly made clever teleconferencing gadgets.

The kitchen pitch for the Triby is really good — and it's a darned cute-looking device to boot. I’ll just tell you right now, my advice is that you shouldn’t go throwing your $199 at Amazon for it just yet. Because while the Triby sounds great and looks great, it doesn't sound great nor does it work all that great. But I still love the thing. 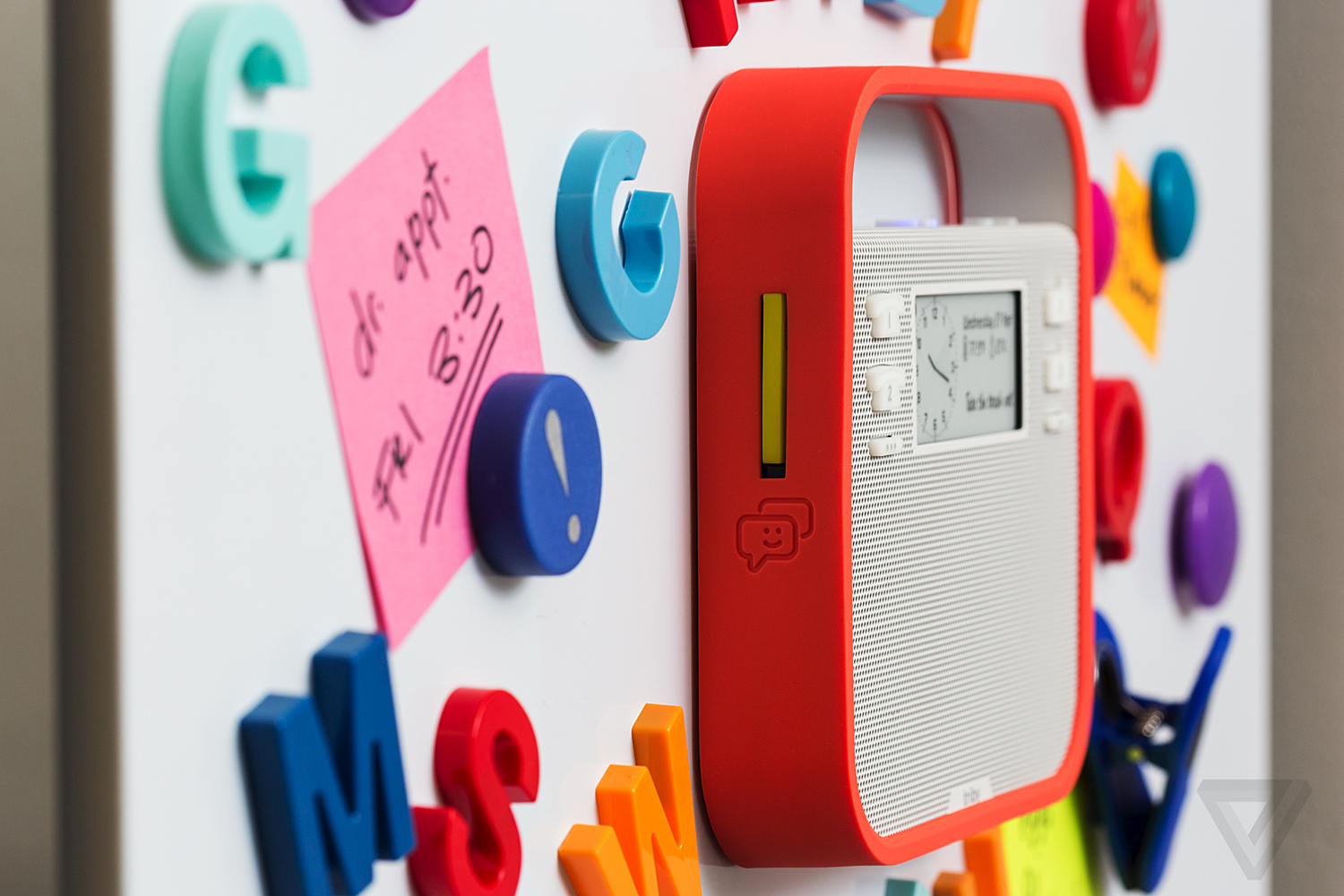 First thing's first: the Triby looks adorable. The design is square and boxy, but approachable. It comes with a rubbery sleeve that covers up the electronics. The default is a boring grey, but for $10 more you can get other colors (spend the extra money). It has a nice little handle to carry it around and, of course, big magnets on the back that let you stick it on your fridge, and a tiny flag that pops out when it gets a new message. It’s basically an old-style radio — the kind many people still keep in their kitchens — but updated for the way we actually listen today.

You set up the Triby with an app on your iPhone or Android Phone. After you pair it with Bluetooth, you can set it up on your Wi-Fi network and you're theoretically off to the races. But it's a slow start — it took me a lot of false starts and dropped connections before I could reliably get things running, and you will need to go through the whole process every time you want to switch Wi-Fi networks. (The Triby also only works on 2.4Ghz networks, unfortunately.)

Inside the app, you have four main sections. There's "Doodles," which lets you send notes to the Triby and receive read notifications; "Call," which lets you use the speakerphone function; "Radio," where you can set up preset radio stations; and finally "Settings," where you'll find a somewhat confusing (and sometimes duplicative) set of controls. 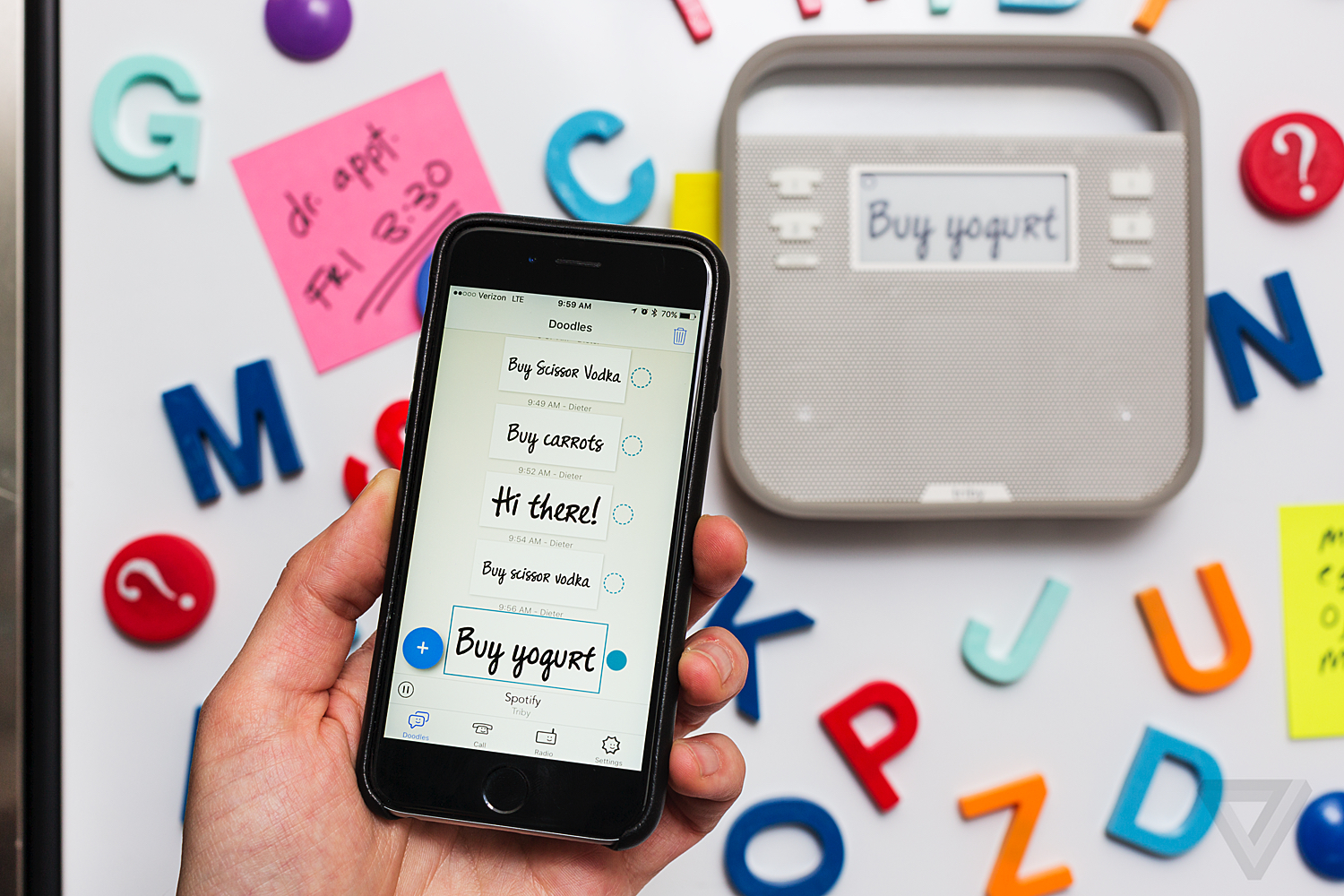 The good news is that you don't need to spend all that much time in the app if you don't want to. Because most of the time, you can use Triby just like you use the Echo: leave it sitting in your kitchen, ask it questions, and use it to do (almost) anything the Echo can do. You can set timers, get the weather, and play music. If you don't want to bother with Alexa, you can still use it as a bog-standard Bluetooth speaker, or just press physical shortcut buttons to listen to preset radio stations.

Strangely, Spotify didn't work for me through Alexa, but that's not a big deal because the Triby identifies itself as a Spotify Connect player in the Spotify app. When you're playing Spotify, you can hold down one of the two radio buttons to save it as a preset.

Triby works fairly well doing those things — but it's not going to impress you with how well it does them. Compared to the Echo the Triby isn't nearly as good at recognizing your voice — if you say anything that even vaguely sounds like "Alexa," it starts listening. And if you have a spotty Wi-Fi connection, forget it: Alexa on the Triby is a frustrating mess. Compared to a Bluetooth speaker like the Logitech UE Boom, the audio you get from the Triby doesn't sound nearly as nice.

But if you're not a stickler for sound quality and if you are mostly planning on keeping the Triby in your kitchen, neither of those things should worry you too much. What worried me is that the software on the Triby often felt buggy — almost once a day the play / pause button would blink and Alexa would stop working. Invoxia says a software update should be coming out today to fix that issue. 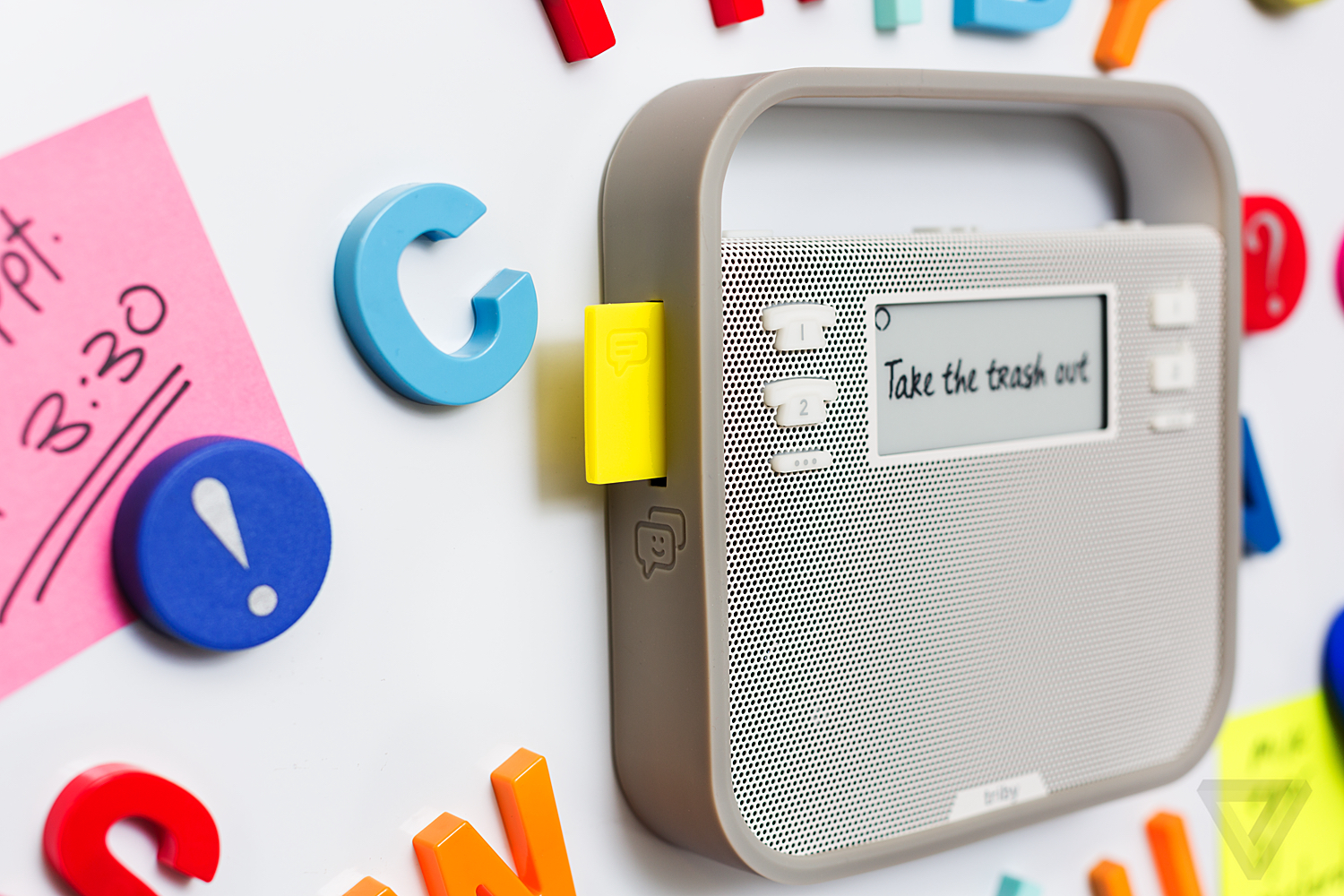 I really like those basic audio functions on the Triby. Sometimes it's just easier to hit a button for the radio station you want than trying to wrangle Alexa into giving you exactly what you want to hear. And it's also nicer than Amazon's Tap Bluetooth speaker in that you can still just use your voice to trigger Alexa.

The "family" features are cute, but forgettable

But the Triby has other ambitions — those family gadget ambitions — that are fun, but mostly they're forgettable. You are supposed to set up a "family" of people who have the Triby app installed on their phones. Once they have them, you can use in-app Wi-Fi calling between the Triby and those phones. I suppose it might be nice for people with kids who just want to make a quick call, but the speakerphone quality was bad enough that I gave up on it after just a few tests.

There's an e-ink screen on the Triby, too. It displays the time and the current weather by default, which is actually pretty great. You can also use it as a tiny message board on your fridge. From the Triby app you can send short notes, emoji, or even drawings to the Triby. When the Triby receives the message, a cute little yellow flag pops out of the side to let you know there's a new message.

When you see the message on the Triby, you can push the flag back in to send a "Doodle received" notification back to the sender. You can also push a button to cycle through eight different emoji responses — but the screen is so slow and unresponsive that getting to the right emoji is often an exercise in frustration.

Battery life is good as long as you know what to expect. It's good for eight to ten hours of audio playback and two weeks of standby time. However, those numbers only apply if you turn off the always-listening mode for Alexa. If you have Alexa on, that standby time goes from two weeks to two days. So if you want to slap this thing on your fridge with the magnets mounted on the back of it, you are either going to need to string a USB cable to it or remember to charge it (the Triby will send you a notification reminder when the battery is low). 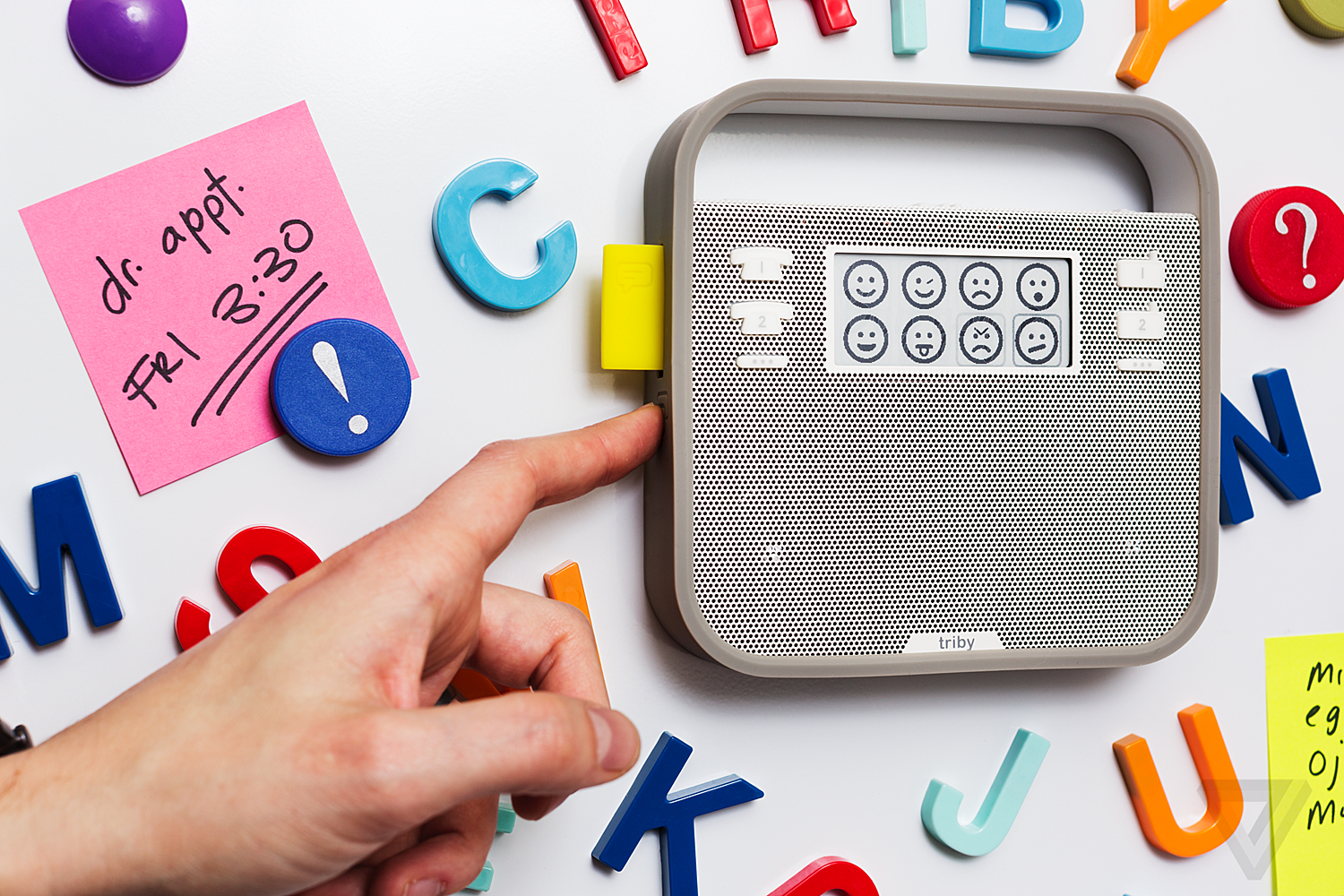 Despite all the hassles I've just enumerated, I still can't help being a little smitten with the Triby. Even after a week and a half of using it, I still smile when I see that silly little flag pop out. I love grabbing it off my fridge and carrying it over to the next room when I'm listening to NPR or Spotify. I like the corny jokes you get from Alexa when you're showing it off. I like that I don't need to fiddle with my phone to get music playing on it.

All the right ideas, not enough of them done well

While I do wish the fit and finish of the hardware and software were better, I think the Triby is neat. Heck, I bought one — but I did so with my eyes wide open about its various problems.

If those hassles (or the $199 price point) have scared you off, don't worry. I'm sure that the Triby is going to be just the first of a flood of clever new gadgets that integrate with Amazon Alexa, and you’re going to want the one that gets all the little details right. And if the promised software update makes things way better (I’ll update this review if so), the Triby could be the one you want.