Franky Zapata, the French jet ski champion who invented the Flyboard Air, has set a new Guinness World Record for the farthest hoverboard flight. Zapata achieved the feat Saturday morning off the coast of Sausset-les-Pins in the South of France, riding his Flyboard Air hoverboard for a distance of more than 2,252 meters (7,388 feet). That far surpasses the previous record of 275.9 meters (905 feet, 2 inches), set last year by Canadian inventor Catalin Alexandru Duru.

Zapata, 37, gained wide attention online earlier this month after videos of him riding the Flyboard Air went viral. Some doubted whether the footage was real or merely a marketing gimmick. His company, Zapata Racing, has developed a wide range of water-propelled devices, including the original Flyboard, which connects to a personal watercraft turbine with a long hose. The Flyboard Air, by contrast, uses an "Independent Propulsion Unit" to fly hose-free for up to 10 minutes, according to Zapata Racing. The company says the device can reach a maximum height of 10,000 feet, with a maximum speed of 150 kilometers per hour (93 miles per hour).

Around 200 people gathered to see Zapata complete the record-setting ride this morning at Sausset-les-Pins, a small seaside city near Marseille. He took off from a platform along the coastline, rising to at least 100 feet above the water, and was trailed throughout the flight by a fleet of boats and jet skis. Speaking to the audience afterward, a beaming Zapata thanked his team for helping him achieve the feat, which he said had been working toward for five years. 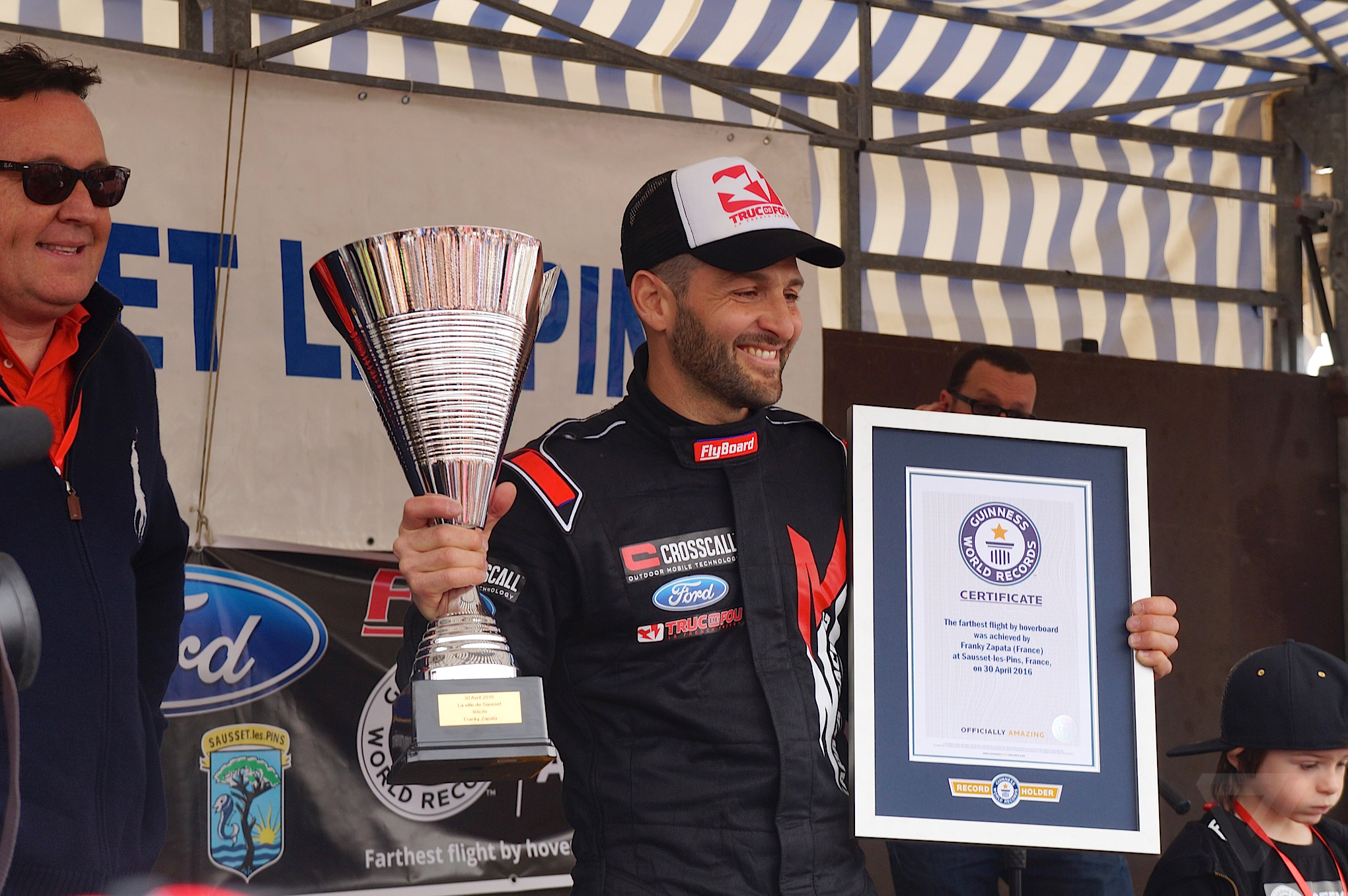 "This has really been a life's work."

"This has really been a life's work," he told reporters at a press conference following the flight.

In an interview following the flight, Zapata said he was most nervous about the launch this morning, but he said his fears disappeared once he was up in the air. The experience, he says, is indescribable. "It's an amazing sensation, it's really peaceful," he said. "I open my arms because it helps me control my movements, but when you open your hands and you feel the wind go through your hand and you have nothing under your feet — it's hard to describe, really. You have to experience this moment in your life."

In an interview with The Verge this month, Zapata said it took four years to develop the Flyboard Air, including algorithms that control the angle of its turbines and adjust its power. The Flyboard Air has four 250-horsepower turboengines, which are fueled by Jet A1 kerosene carried in a tank strapped to its rider's back. (Two other engines are on each side of the board, for stabilization.) Riders use a hand remote to control the engines' throttle.

Others have developed similar devices, though none are quite as spectacular as the Flyboard Air. Duru, the previous world record holder, created a hoverboard that's powered by propellers, and companies like Lexus and ArcaSpace have come out with more traditional hoverboards that fly closer to the ground.

"My goal is to ride the clouds."

Zapata's system is still very new; Saturday's record-setting ride comes just two months after the Flyboard Air's first successful run, and he told reporters that prior to the flight, he had only spent a total of about two hours flying it. The inventor has acknowledged that it's not the kind of thing people could just pick up and learn, but he says his company has already begun working on a smaller, more consumer-friendly version that riders could fly while seated.

In an interview with The Verge Saturday, Zapata said he dreams of the day when he can just "pick up my Flyboard and fly to work," saying he still needs to extend the Flyboard Air's flight time before it can be widely adopted. He also thinks it could help military and other security forces respond to emergencies and combat terrorism in densely populated areas. "If people are able to fly like this, they can be some kind of superhuman," he said. "And they can help save people in this completely mad world."

His longer-term goals sound even more ambitious. "You won't believe it. We will fly the clouds," Zapata told The Verge earlier this month. "My goal is to ride the clouds. Do like snowboarding in the powder, but I want to do it in a cloud. That's my dream, and I will do my best to realize that."

Update April 30th, 7:17AM ET: This article has been updated to include quotes from Franky Zapata.