This is the future of the smart home interface

Amazon’s Echo is often referred to as a Trojan Horse. Slid into your home under the guise of a wireless speaker, the Echo has grown to become one of the best ways to control smart home devices, such as lights, thermostats, locks, and more with just your voice. It turns out that it’s much easier to turn your lights on or off with a voice command than to pull out your smartphone, unlock it, load an app, and push a button. The Echo also lets you set alarms, timers, catch up on the news, and yes, buy things from Amazon with simple voice commands. And its wireless speaker capabilities have expanded with support for Pandora and Spotify. As a result, the Echo has quickly become one of Amazon’s best-selling products, even more popular than its Kindle line of e-readers.

If the original Echo was Amazon’s Trojan Horse to get into your home, the new Echo Dot is Amazon’s army coming in behind it. It’s smaller and half the price ($89.99 vs. $179.99), yet has all of the same far-field voice recognition technology and voice control capabilities as the larger Echo. The Dot won’t fill a room with sound, but it can be connected to a larger speaker if you want, effectively turning a "dumb" speaker "smart."

You don’t need a full-size Echo to use the Dot — it is a fully standalone device. But until Amazon opens up sales to a wider audience, the only way to buy a Dot is by asking an existing Echo or Fire TV to order one. (Amazon closed a loophole in its iOS app that let you purchase a Dot without an Echo.)

The Dot is easy to put in every room in your house, giving you voice control access points all over for a relatively low cost. It’s hard to overstate how much of a leap this is for interacting with a smart home — prior to the Dot, setting up a full house with voice control required significant investment and complicated installations. With the Dot, virtually anyone can pretend they are on the bridge of the Enterprise, barking commands at an omnipresent computer in every room of their home. 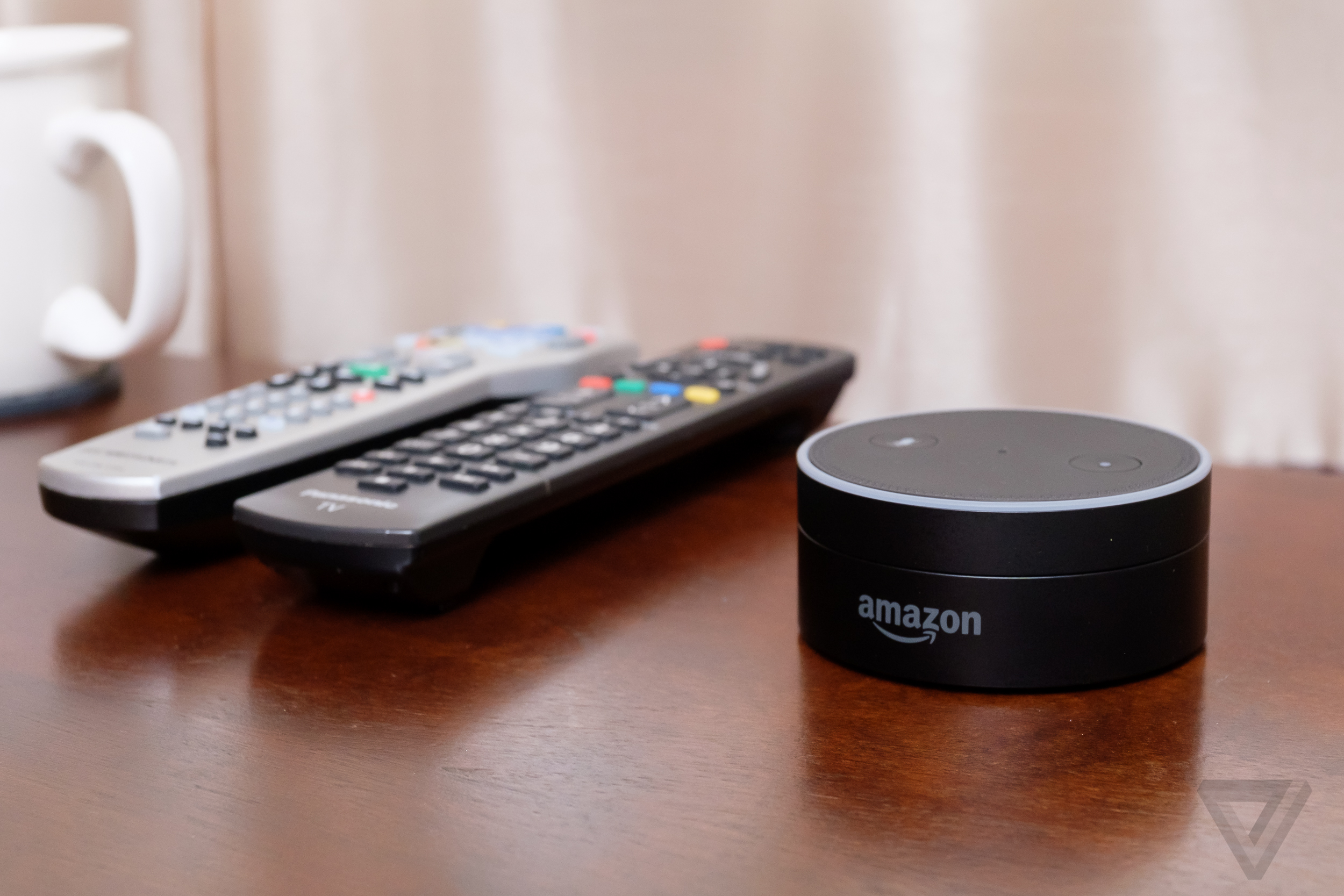 The Dot looks like a hockey puck, or a can of Chicken of the Sea that’s been painted black. If you were to take an Echo, saw off the lower speaker assembly, and seal up the bottom, you’d essentially have a Dot. It has the same circular volume ring, mute button, and Action button on top, as well as the blue status light that illuminates whenever it detects its wake-up command ("Alexa," "Echo," or "Amazon," if you’re boring). There are no screens or other forms of interaction — aside from setting it up with Amazon’s smartphone app, the Dot is designed to be fully controlled with voice commands. 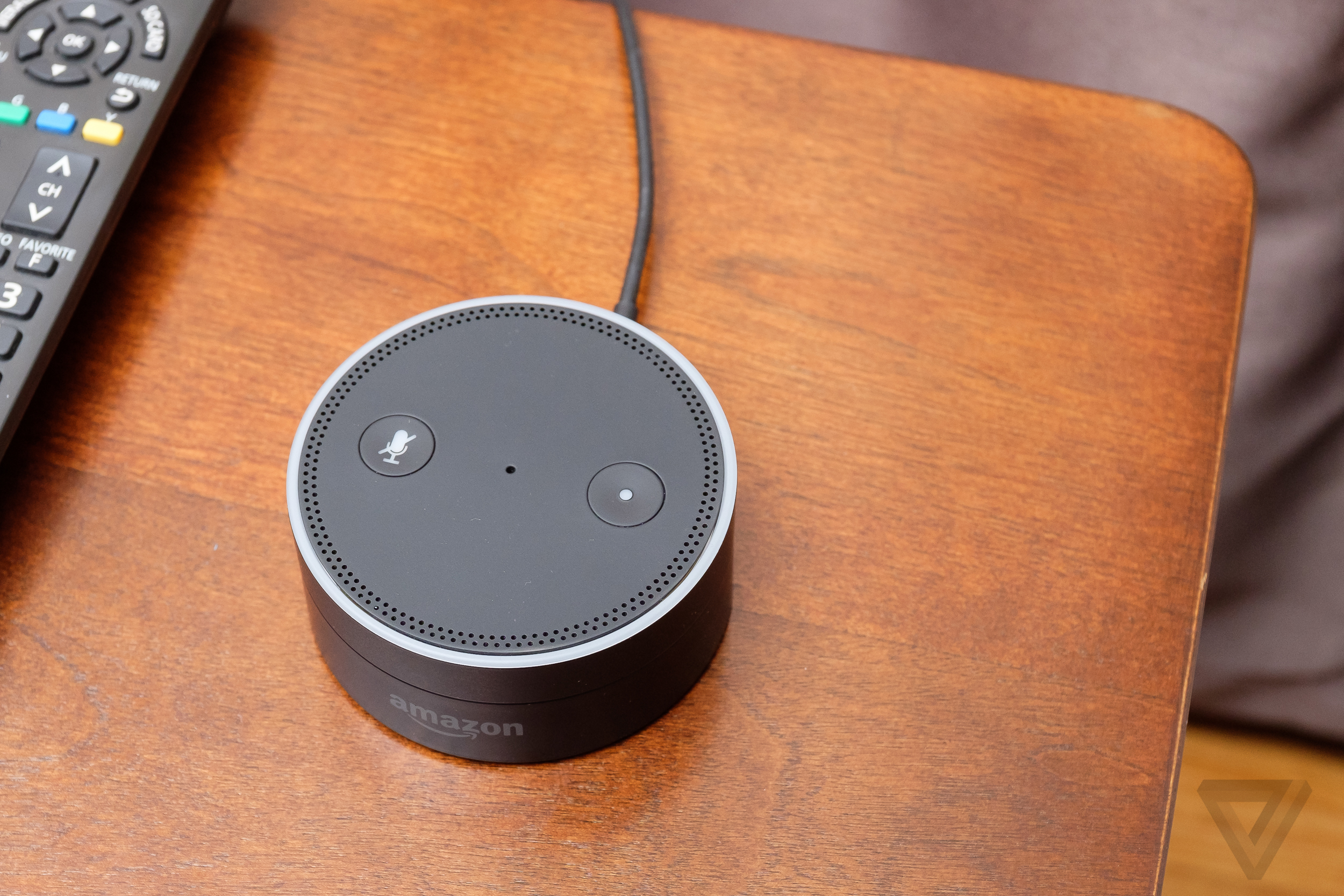 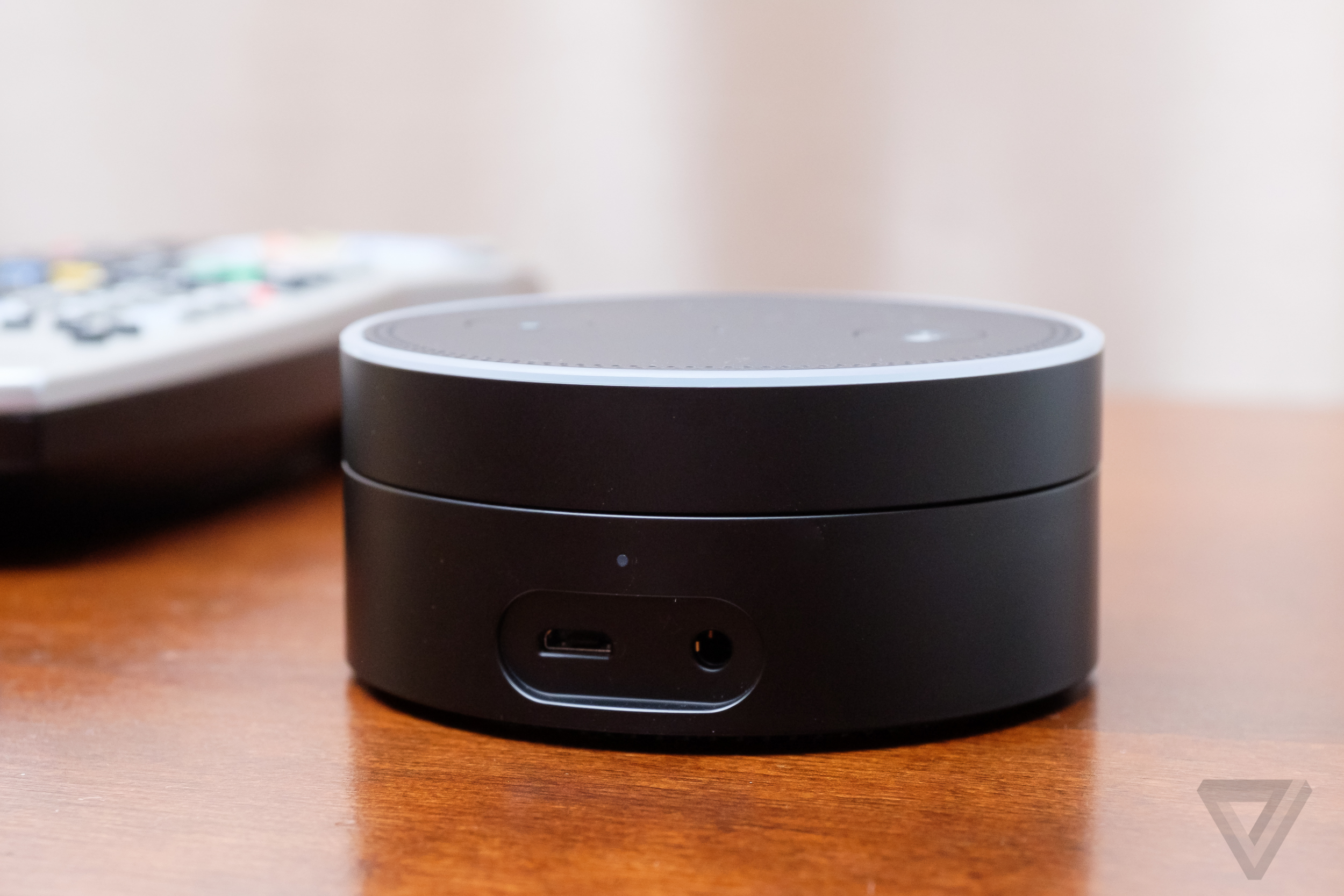 The Dot’s small size is a really important point: it can hide in more places, take up less counter space, and is less visually obvious than the full-size Echo1. All of those traits make it easier to buy more than one Dot and scatter them throughout your house.

The Echo and the Echo Dot have the same circular footprint, but while the Echo measures 9.25" tall, the Dot is a mere 1.5".

Despite its smaller size, the Dot has the same seven, always-listening microphones set up in an omnidirectional pattern and the same super-responsive, far-field voice recognition as the bigger Echo. Compared side-by-side with the Echo, the Dot is just as responsive to voice commands: it’s able to hear my voice from across the room, while playing music, or while my two kids are running through the house raising hell.

The Dot does have a small built-in speaker, which works great for Alexa’s voice replies and confirmations. It can be used in a pinch to play music, but it certainly isn’t room-filling or particularly good sounding. That’s where the Dot’s new ability to hook up to a larger speaker comes into play. You can use the 3.5mm audio jack to plug into the input of another speaker, or you can pair the Dot to a Bluetooth speaker for a wireless connection2. All of the Dot’s audio will then be routed to the connected speaker, whether it’s Spotify, Pandora, Amazon Prime music, or simply the current weather.

I tested it with the Naim Mu-So Qb, but it will work with any speaker that doesn’t need a PIN code to pair or has a line input.

The Dot's speaker is much weaker than the Echo's

Limiting new Dot purchases to existing Echo owners indicates that Amazon expects most people to have multiple Alexa access points in their homes. That can present an issue at times: both Echoes are so good at listening, a loudly spoken voice command could trigger more than one at a time and you could end up with music playing in multiple rooms. This happened to me during one of the rare quiet moments in my house: I asked the Dot in my kitchen to play some music and the Echo in my bedroom picked up the command as well. The simple solution to this is to set different wake words for each Echo or to make sure they are far enough apart (and perhaps behind closed doors) when setting them up in your home. 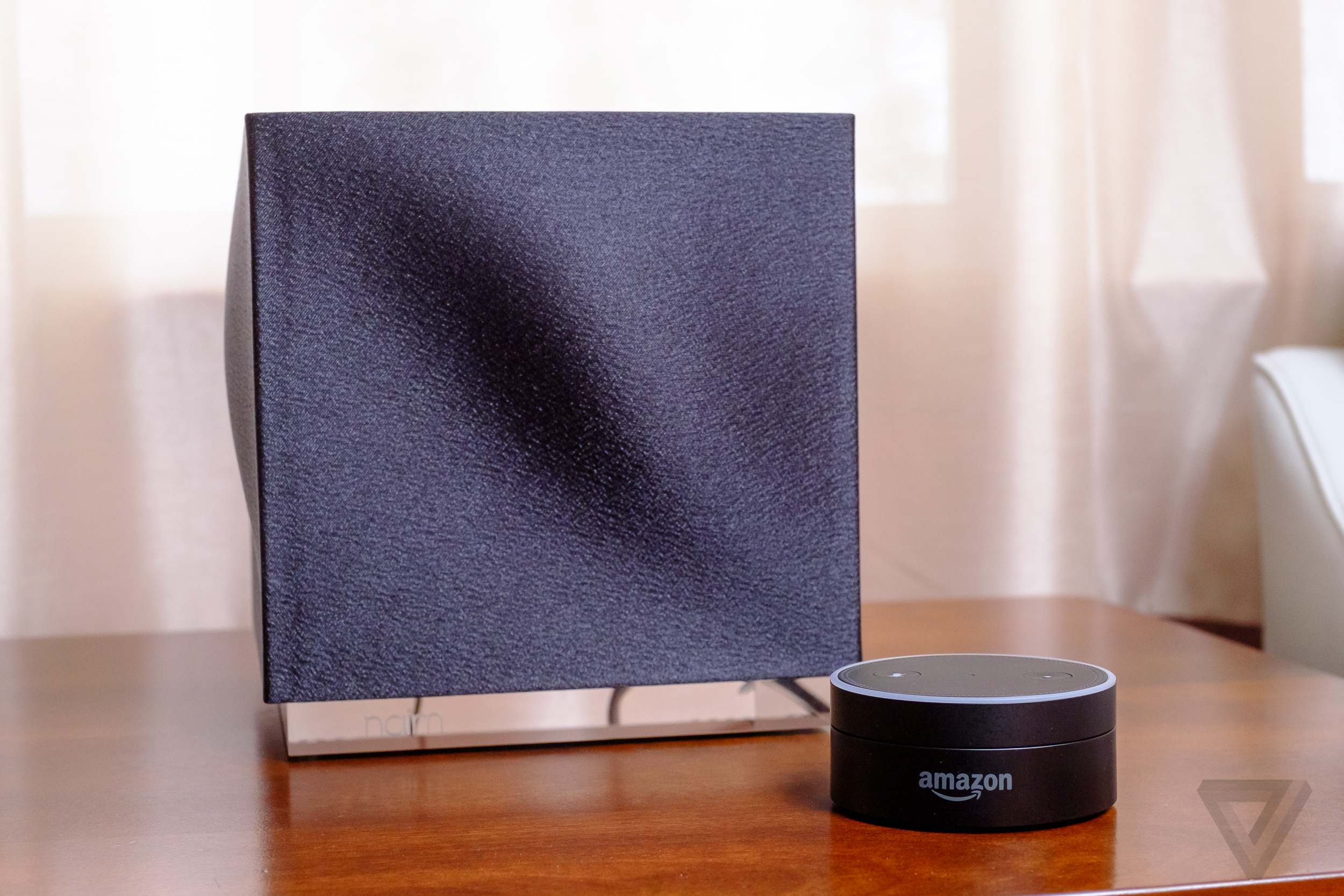 The Dot can be connected to larger speaker via Bluetooth or line out.

If all you’re doing with the Dot (or the Echo, for that matter) is playing music, you’re missing out on the bigger picture. The Dot is a voice-control access point that’s small, unobtrusive, and always ready to accept a command. The biggest hurdle with smart home technology thus far is making it as seamless and easy to control as current devices. Smart lights are fun to play with, but it’s far easier to just hit a wall switch to turn them on or off than to use your smartphone.

The Dot’s voice control helps bridge that gap — I can control multiple lights with my voice from wherever I am in a room without constantly being tethered to my phone3. Or I can ask it to turn up the thermostat installed in the hall from the comfort of my bedroom. In the kitchen, I can yell at the Dot to add items to my shopping list while my head is buried in the refrigerator. I can ask it how many tablespoons are in a third of a cup when I’m making dinner. I can ask it what my commute is like or what the weather will be like today while I make coffee in the morning. I can even ask it to order an Uber ride while I’m still brushing my teeth. I could do any one of these things with the phone in my pocket, but it’s far easier to ask Alexa to do them, especially when my hands are otherwise occupied.

The reality for me is that I am constantly tethered to my phone for other reasons, but that’s a topic for another day. 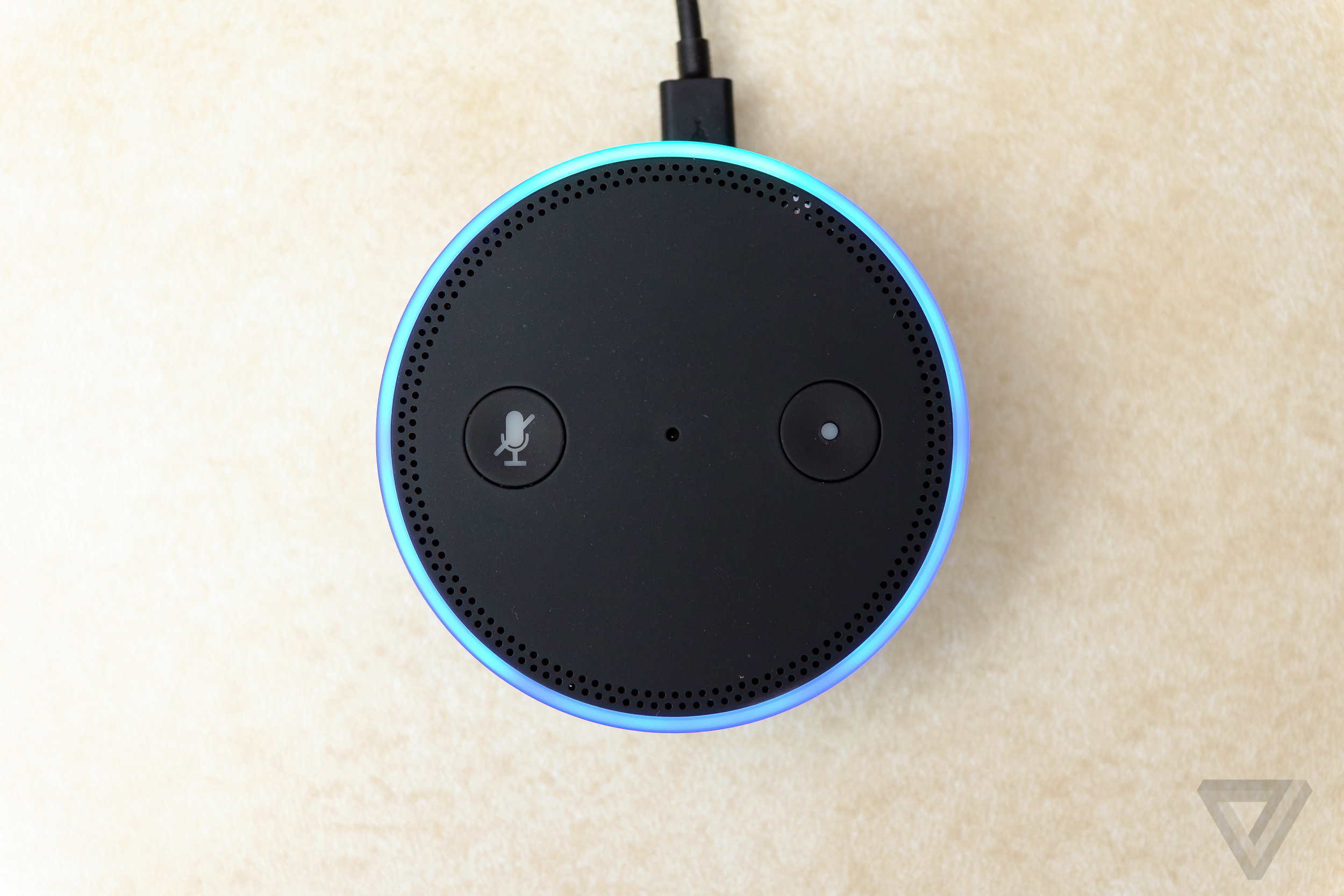 I’ve long used the larger Echo to control my smart home appliances (Hue, Cree, and GE lights controlled via SmartThings and Philips hubs, and a Nest thermostat) and as an alarm clock and weather station beside my bed. I put the Dot in my kitchen on the other side of the house, where it can hide in a corner or on top of my microwave, ready to tell me the news, control my lights, adjust my thermostat, perform unit conversions, act as a timer, and entertain my kids with silly trivia while dinner is prepared. It’s more ideal there than the full-size Echo, which takes up more precious counter space than I (or my wife) would like. 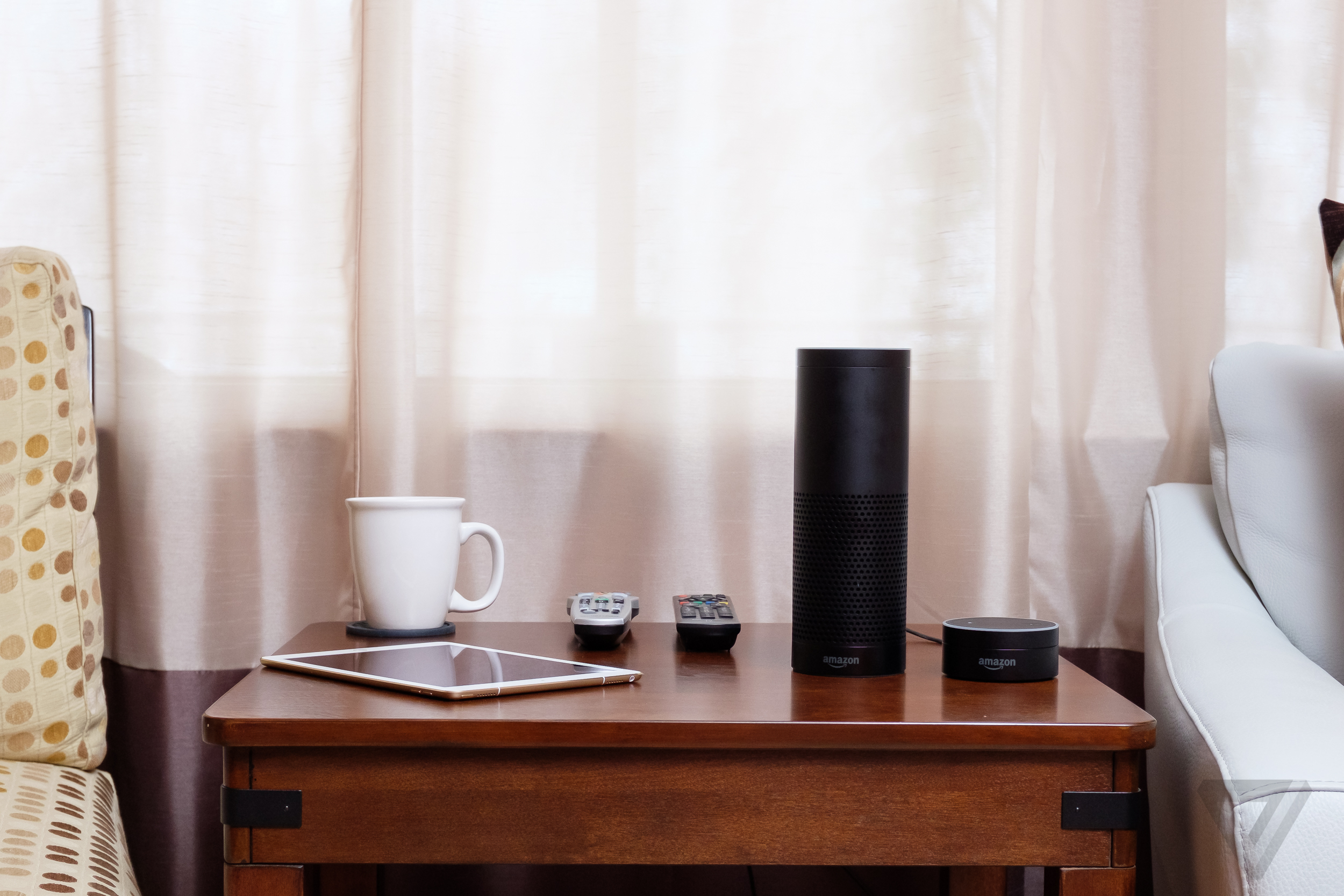 Amazon's weird wireless speaker has been something of a sleeper hit in the year and a half since its launch, and it’s only gotten better and more functional since then. It could perform about a dozen tasks when it first shipped, and now, it can do over 300, with new functionality added every week. It’s easily one of my favorite gadgets released in the past couple of years.

The Dot has all of the Echo’s capabilities and takes them even further, making it easier than ever to interact with a powerful computer in every room of my house with just my voice. The Dot may be small in stature, but it’s a potentially bigger deal than even its forebear. If you already have an Echo and live in a multi-room home, I can’t think of a reason why you wouldn’t want a Dot. Whether or not Amazon will sell you one, however, is still up in the air. A support page for how to order the Dot notes that the device is in limited quantities and says "when we sell out of Echo Dot devices, they will no longer be available." Amazon would not elaborate on future plans for the Dot when I asked, but a spokesperson did note that if you order a Dot now, it will arrive some time after August 1st.

The Dot is the future of the smart home

Should Amazon continue producing the Dot and open up sales to a wider audience, it's easy to see that the future of the smart home is inside this little black puck. Alexa’s listening, are you?