Reddit today released new, tailored apps for iOS and Android, with the iPhone version replacing the popular Alien Blue service as the site's official mobile client. Both of Reddit's apps have been in beta for some time — Android since January and iOS since March — but the software is now available to download in the US, Canada, the UK, and Australia. Reddit plans on making its apps available in more countries over the following months.

Alien Blue, which has been the official Reddit app for about 18 months, is being removed from the iOS App Store. Its paid iPad version will remain available until Reddit develops its own dedicated tablet app. Those who have Alien Blue downloaded can continue to use the app.

"We learned a lot from our passionate Alien Blue community about what makes a great iOS app and we applied those learnings when building Reddit for iOS," Alex Le, Reddit's vice president of consumer product, tells The Verge. "Due to limited resources, we decided to focus our efforts on making Reddit for iOS our primary and official Reddit client. The new code base has allowed us to add features and build a stable client in a record amount of time. We hope to keep up the pace and deliver new updates at least once a month (hopefully even more often than that)."

The new apps represent Reddit's first concerted effort to create top-class mobile experiences since it acquired Alien Blue in October 2014. The social news and community site's mobile approach has always been somewhat inconsistent; a dedicated AMA app was launched two years ago and later abandoned. To fill the void, third-party Reddit clients with unique takes on how the site should operate on smartphones have sprung up and stuck around for years. Of that ever-growing list, Alien Blue stood out as the most polished and most used of the bunch, giving Reddit a good reason to scoop it up.

The approach changed last July, with the return of co-founder Steve Huffman as CEO. The company underwent a rather tumultuous mod revolt, leading to the eventual resignation of interim CEO Ellen Pao, and the episode acted as kind of reset for the site and its employees. Once things quieted down in the fall, Reddit decided to put resources toward creating new mobile apps of its own. After hiring Le to help lead product, Reddit brought on Chen Chen from Instagram to become its lead iOS engineer. The two, alongside a small internal team at Reddit, focused on creating the company's first fully in-house apps. 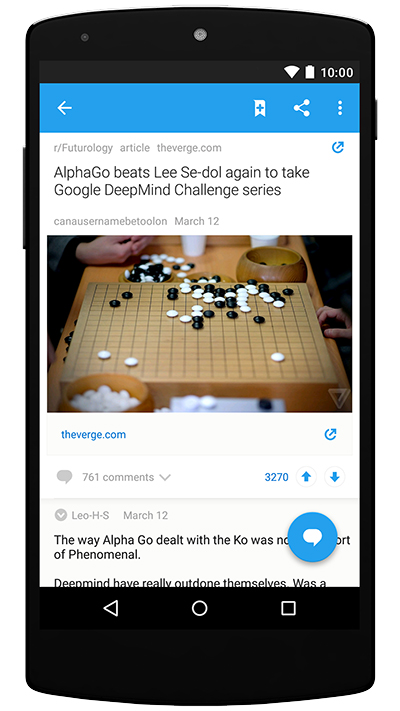 "We felt an obligation to deliver a Reddit experience to our core users — the people who love Reddit and can't live without it," Le says. "The third-party ecosystem has been really awesome and there’s always going to be third-party apps for Reddit." But Le says the company sees itself as a "custodian" of sorts for how hundreds of millions of Redditors out there use the site. So it wanted to create something that could try and meet everyone's needs.

Reddit's new apps look like souped-up versions of Alien Blue, with design tweaks and iconography that make the experience feel less like a stripped-down version of the desktop site and more like a unique destination. The software preservers its predecessor's popular Night Mode feature for viewing Reddit in low-light situations. But it also rethinks how one might navigate the flood of Reddit content on a phone screen. There's a new "speed read" button that lets you quickly navigate lengthy, meandering threads like Ask Me Anything sessions. The apps also cater better to active users with quicker and easier ways to drop in links, text, or photos and check your account activity.

Some of the most important changes happen to be under the hood. Chen takes pride in how efficient the app is — at only 4.8MB, Reddit for iOS downloads in less than five seconds, he says, and opens and loads even faster. Throughout the app, Chen says he and his team employed an extreme attention to detail. "Keep in mind this is v1 [version one], the depth is there," he says. "I don’t think think is this finished. We’re going to enable a lot of product to be deployed." Chen says the app's extremely low crash rate and nimbleness will help it scale to the tens of millions, and onward to hundreds of millions, of users who may want to access Reddit on mobile.

To help get the app off the ground, Reddit is offering users who download it within the first week a free trial of Reddit's ad-free gold membership. The company plans on maintaining advertising on its mobile apps for free users, but in a way consistent with its philosophy on keeping it out of the way when possible.

Revenue aside, Reddit hopes the apps will give people a fresh way to use the site. "For people who are really used to the desktop experience it’s brand new," Chen says. In that regard, he adds, the apps "send a signal, that Reddit has become even better."