Pebble is vying to compete with Fitbit

It took Pebble until December of last year to add real step-tracking and other fitness features to its smartwatch and mobile app. Now, the company is taking a speedier approach to development. A new update out today gives Pebble Time owners a more holistic snapshot of their steps and sleep on the Pebble app's dedicated health tab, letting you compare your current activity with past days, weeks, and months. The app will also send daily step and sleep summaries to the watch, as well as tips and performance comparisons for workouts.

The update also includes a couple more subtle additions for Time owners. The company's smartwatch alarm app will now try and determine whether you're sleeping deeply or close to waking up. If it's the latter, the alarm will trigger 30 minutes early. On iOS, Pebble's Send Text app now lets you start conversations with recent and favorite contacts by issuing canned text responses or voice messages to the watch. (If you own an older Pebble device, you can now reply to calls from your wrist with a prewritten text response or voice message.) 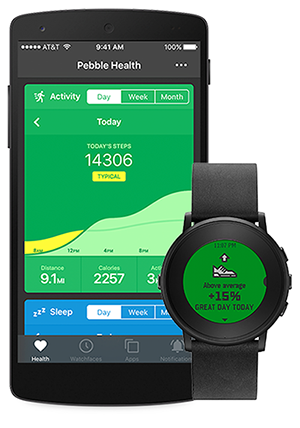 Pebble may have been late to the fitness game, but it's clear the company is taking health software seriously. That's because Fitbit, the market leader for fitness trackers, assumed its lead by focusing on these features from the onset, leaving Pebble playing catch up at the same time it contends with the Apple Watch. Of course, one of the biggest hurdles for wearable makers is how many people stop using the devices after about six months, or switch to a competitor with better software. So Pebble is doing all it can to stay competitive.