Bees are continuing to die off in great numbers across the US, with rates increasing over the past year to a loss of 44.1 percent of all honeybee colonies, according to the preliminary results of a new study. The study, conducted in part by the United States Department of Agriculture, found that bee loss worsened over the past few years, with colony loss jumping up from around 34 percent two years prior. This is still lower than the 45 percent loss seen between 2012 and 2013, but it reverses the improvement seen in the years thereafter.

It appears mites and pesticides are partially to blame

Some colony loss is expected over each year, particularly in the winter. But beekeepers reported their acceptable winter loss rate being no higher than 16.9 percent — far lower than the 28.1 percent loss seen this past winter. Less expected, according to the Associated Press, is similar losses over the summer. This year, summer losses matched winter losses, at 28.1 percent of colonies. One of the study's authors tells the AP that honeybee-killing mites may be to blame for the summer spike. 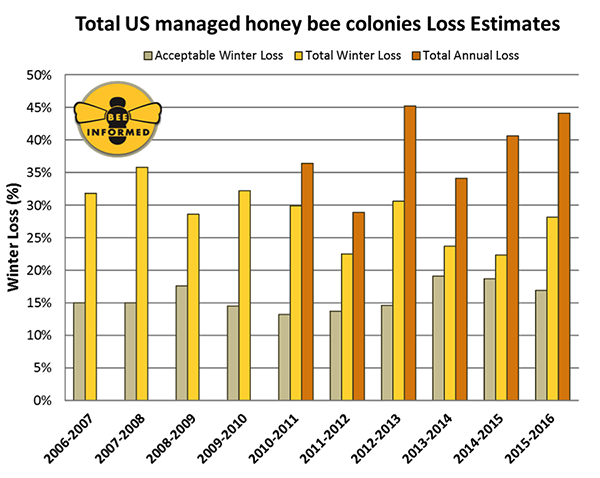 The environmental group Friends of the Earth also places major blame on pesticide use. "These honeybee losses reinforce what sciences continues to tell us; we must take immediate action to restrict pesticides contributing to bee declines," says Tiffany Finck-Haynes, of Friends of the Earth, in a statement. Massive bee loss began about a decade ago, and pesticides have long been suspected as a major cause. While pesticides have been found to be harmful, they don't affect all types of bees equally, complicating the problem. Climate change has also been identified as a problem.

Bee loss may be a huge global problem. Bees are relied on to pollinate significant portions of our crops, so their death represents a real threat to agriculture.