On top of being a world-class athlete, Serena Williams is also a world-class sharer of friendly advice. Last year she gave us a detailed account of what one should do when one's phone is stolen off of a cozy café table. It involved shouting and sprinting and references to the classic Nickelodeon cartoon Doug.

Now Serena has another piece of advice for you: "Don't eat dog food." Specifically, don't eat extremely expensive hotel dog food, which comes in the same takeout containers as human food, is described like human food, and is delivered with real human cutlery. (Your uncle who eats dog biscuits just to freak people out will probably be fine.)

Serena recounts taking one bite, which she says tasted like "cleaning liquid." She openly admits to sprinting to the toilet hours later, and doodles a helpful note for the next occupant of her hotel room. 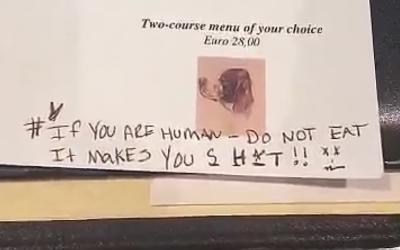 Serena notes that she chose to tell this story on Snapchat because she won't have to "hear the haters." Honestly, I can't fathom what sort of person would give her guff for this. That spoon is made of real silver! That dog was served real salmon! What are you, a genius? A professional chef? A snob?

Someone had to be the first person to eat blue cheese, which looks like a pile of mold, and discover that it's delicious. Another person was the first to eat a poisonous berry. Both are heroes. If their trials had remained a secret — if these daredevils had silently nibbled their mold cheese in shame or allowed themselves to perspire alone 'neath the brush — where would we be? Eating boring cheese and dying all the time, that's where.

This is the most noble use of a Snapchat story that I have ever seen. If I am ever in the position to buy a $20 entree for a pet, I will escape unscathed by the grace of Serena.