Thin and light laptops have been around for so long it’s hard to remember a time before them. Apple demonstrated that a thin and light machine could easily be a full-fledged computer with the second-generation MacBook Air in 2010, and PC makers have been chasing that rabbit ever since. But while it feels like almost every laptop is super portable now, the reality is that most thin and light machines have small displays — 12, 13, maybe 14-inch screens.Samsung’s new Notebook 9 bucks that trend: it’s a bonafide 15-inch computer that weighs less than three pounds. It’s thin enough to slip into a bag with ease, and it doesn’t compromise specs in the name of design. The $1,199 Notebook 9 has a Core i7 processor, 8GB of RAM, and 256GB of storage. It’s not a budget laptop by any means, but it also isn’t priced into the stratosphere, coming in around the price of a similarly specced 13-inch MacBook Air

A 13-inch version of the Notebook 9 is also available, and is priced a couple of hundred dollars less than the 15-inch model. I did not test that unit, however, and this review is focused on the larger machine.

There are distinct advantages to having a larger display: it’s easier to read text on, easier to multitask with, and overall, just more enjoyable to use for hours at a time. Further, a larger screen provides room for a larger keyboard and trackpad, as well as more ports than you might get on an ultra-compact computer. There are also distinct advantages to thinner and lighter computers: they are easier to carry around, making it more likely that you’ll take your computer with you somewhere instead of leaving it behind on your desk. The Notebook 9 is one of the few computers available that tries to do both.

The thing that’s most remarkable about the Notebook 9 is just how light it is. Weighing in at 2.9 pounds, it’s less than the 13-inch MacBook Air and virtually every other 15-inch computer available2. It’s as easy to carry around and slip into a bag as any ultrabook or ultraportable computer I’ve used, and it makes my daily workhorse 15-inch MacBook Pro feel like a brick in comparison. The downside to the Notebook 9’s svelteness is that it doesn’t feel as well made as other aluminum computers — it’s hollow-feeling and the display hinge is looser than I’d prefer. The Notebook 9 may borrow a lot from the design of the MacBook Air, but it doesn’t match Apple’s level of build quality.

LG’s Gram 15, announced at CES this year, is even lighter at 2.2 pounds, but it doesn’t make the Samsung’s lack of weight any less impressive.

The Notebook 9’s 15-inch screen has a 1080p resolution, which isn’t as high as other Windows 10 laptops, but is still plenty sharp enough for most purposes. It’s bright enough to work outdoors, if need be, and the bezel surrounding the screen is a scant 0.24-inches wide, making the display feel even larger than it is. The base Notebook 9 does not have a touchscreen3, which the vast majority of Windows laptops now come with. But because the Notebook 9 is a traditional laptop — it’s not a convertible and doesn’t pretend to be a tablet or anything other than its obvious purpose — I didn’t miss the touchscreen during my testing.

Samsung’s Notebook 9 Pro offers a 4K touchscreen, but at a $400 premium. It is also significantly heavier than the standard Notebook 9 at 4.45 pounds.

A thin bezel makes the screen feel even larger

The 9’s keyboard is roomy and comfortable to type on, though I found it to be spongier and less responsive than other keyboards. It has a useful row of shortcut keys for Home, End, Page Up, and Page Down on the right-hand side, which is definitely something you don’t see on smaller machines. But the keyboard lacks backlighting, which is unforgivable at this price point. Fortunately, the large trackpad is smooth and tracks my fingers reliably, even with multitouch gestures. It also doesn’t make the cursor jump around the screen when I’m typing, so there are clearly some good algorithms in place to avoid false touches. 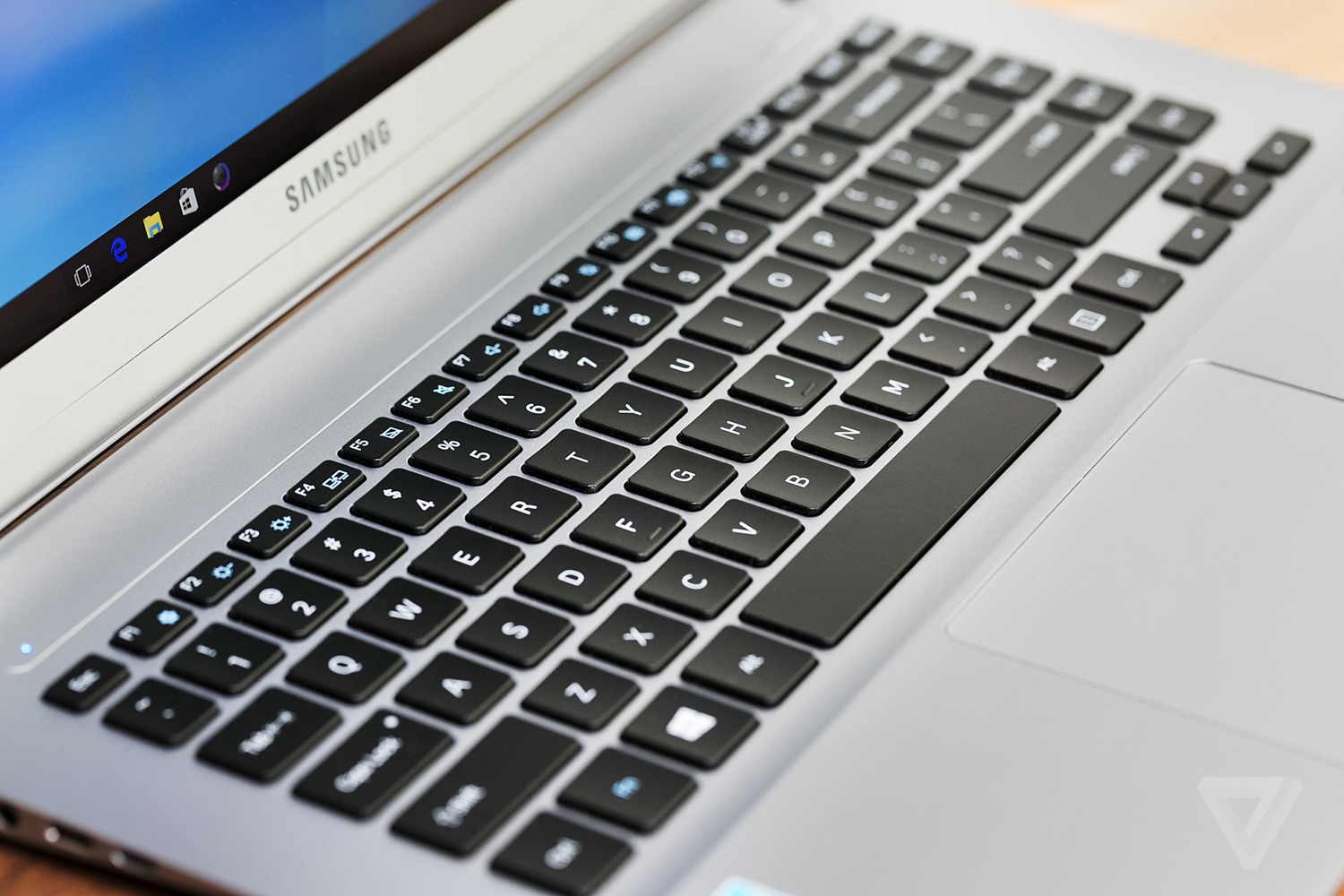 The Notebook 9 is not a gaming machine or a high-end workstation by any stretch, but it is powerful enough for most tasks outside of gaming or video editing. The 8GB of RAM and Core i7 processor handled everything I threw at it, and it didn’t buckle under my daily workload of dozens of Chrome tabs, switching between apps such as Word and Evernote, and keeping up with my colleagues in Slack. 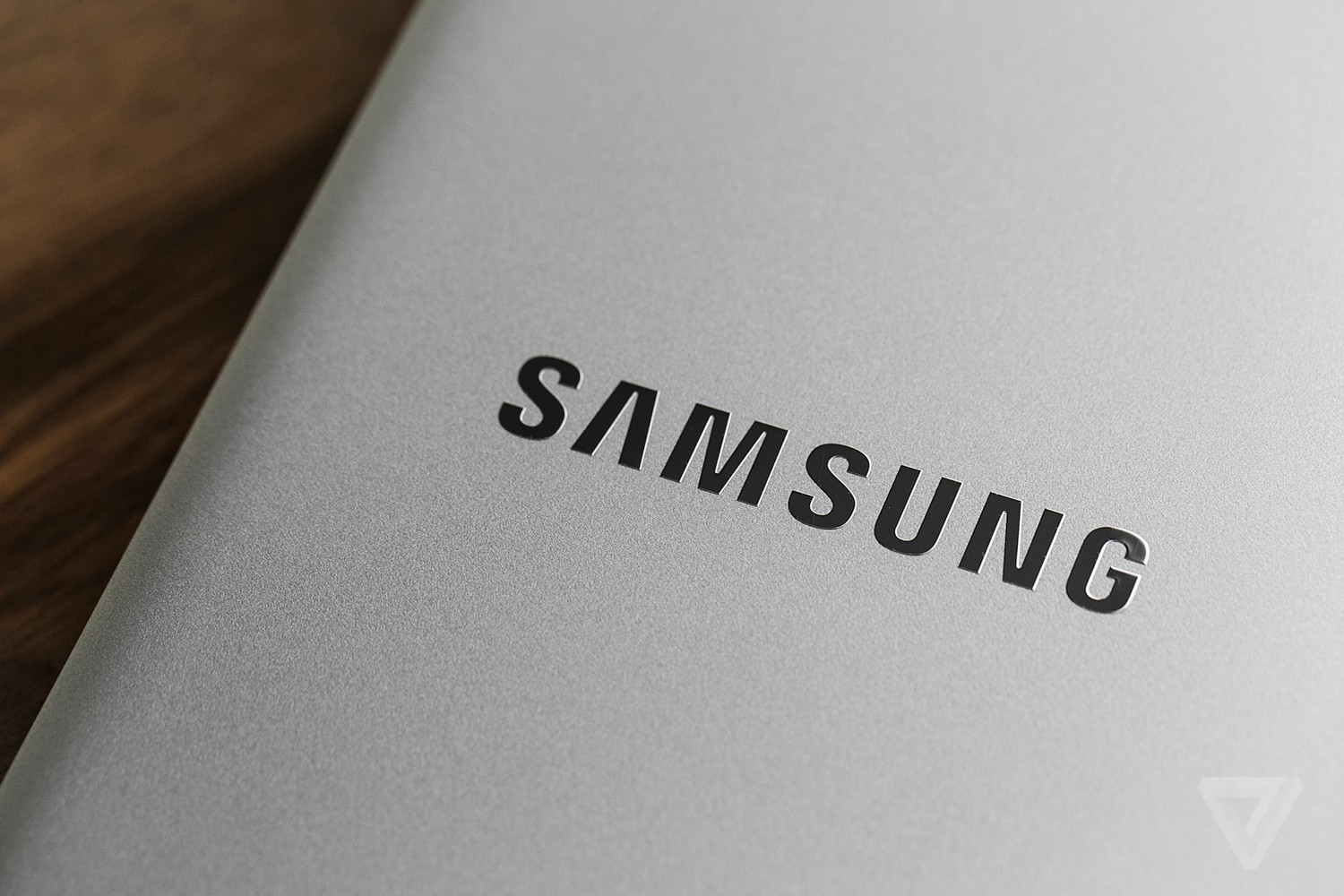 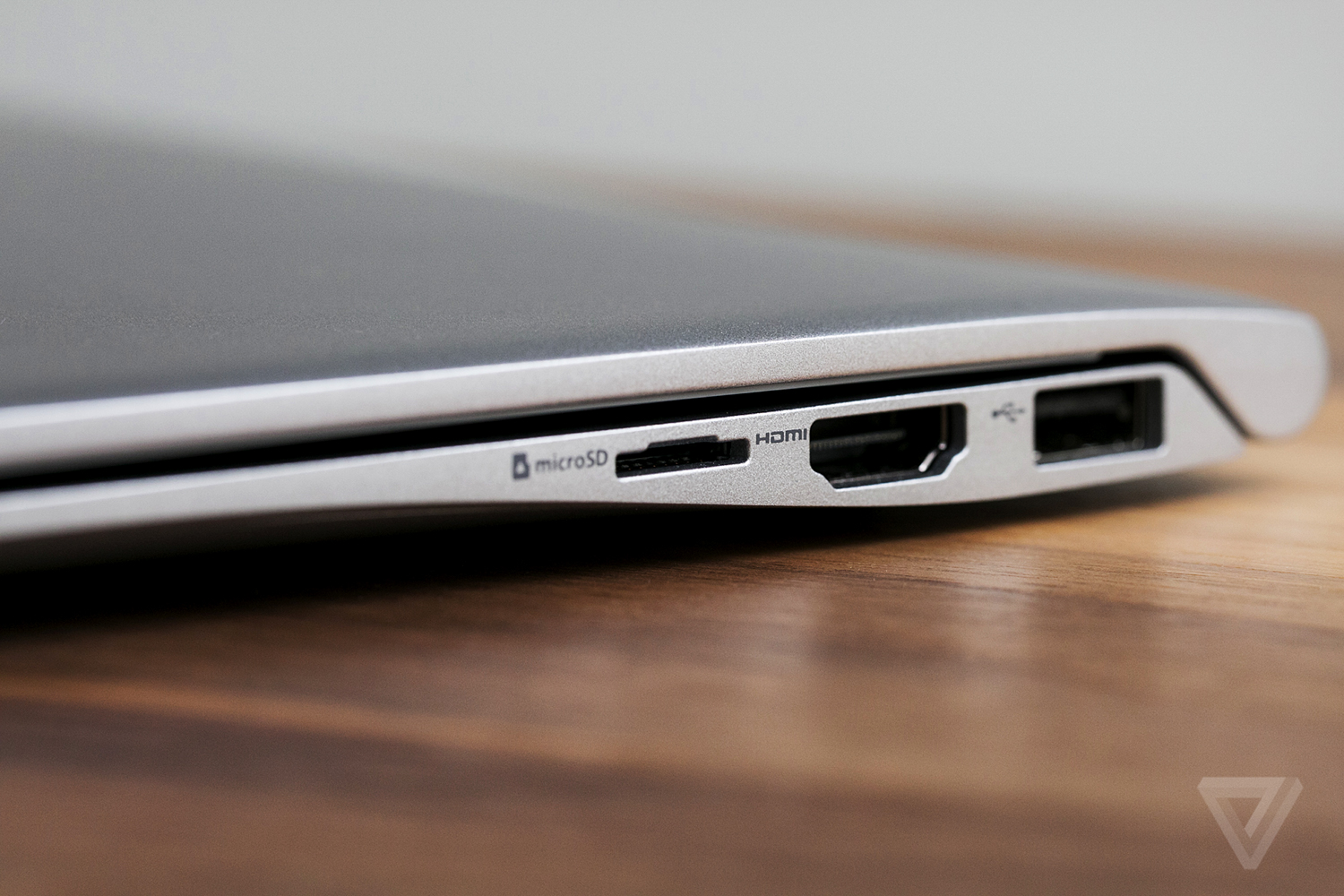 Battery life with the Notebook 9 is best described as acceptable, however, and far short of extraordinary. Samsung claims it lasts up to 12 hours between charges, based on a looping video test, but in my experience using it for day-to-day work, I get closer to six or seven hours before it kicked the bucket. That’s not enough to last a full work day for me, but it is long enough to cover an entire flight from New York to San Francisco, and is probably long enough for most people’s needs.

You won’t have a great time using the Notebook 9 on that flight, however, as its larger size makes it difficult to use on a plane. A large screen is great for the many reasons I note above, but it means the Notebook 9 is too large to fit on an airplane tray and is a little clumsy to use on a lap. If you’re a regular road warrior, it’s not the best travel computer for these reasons.

Other things of note with the Notebook 9 include its useful array of ports: two USB 3.0, USB Type-C, and a full-size HDMI. I’m less impressed with the dedicated Ethernet port (which requires the use of an adapter, why not just plug into a USB port?) and the microSD card slot, which would be much more useful as a full-size SD slot. Also, while the USB Type-C port can be used to connect or charge a smartphone, it can’t be used to charge the laptop, so you’re still stuck with using Samsung’s proprietary power connector. 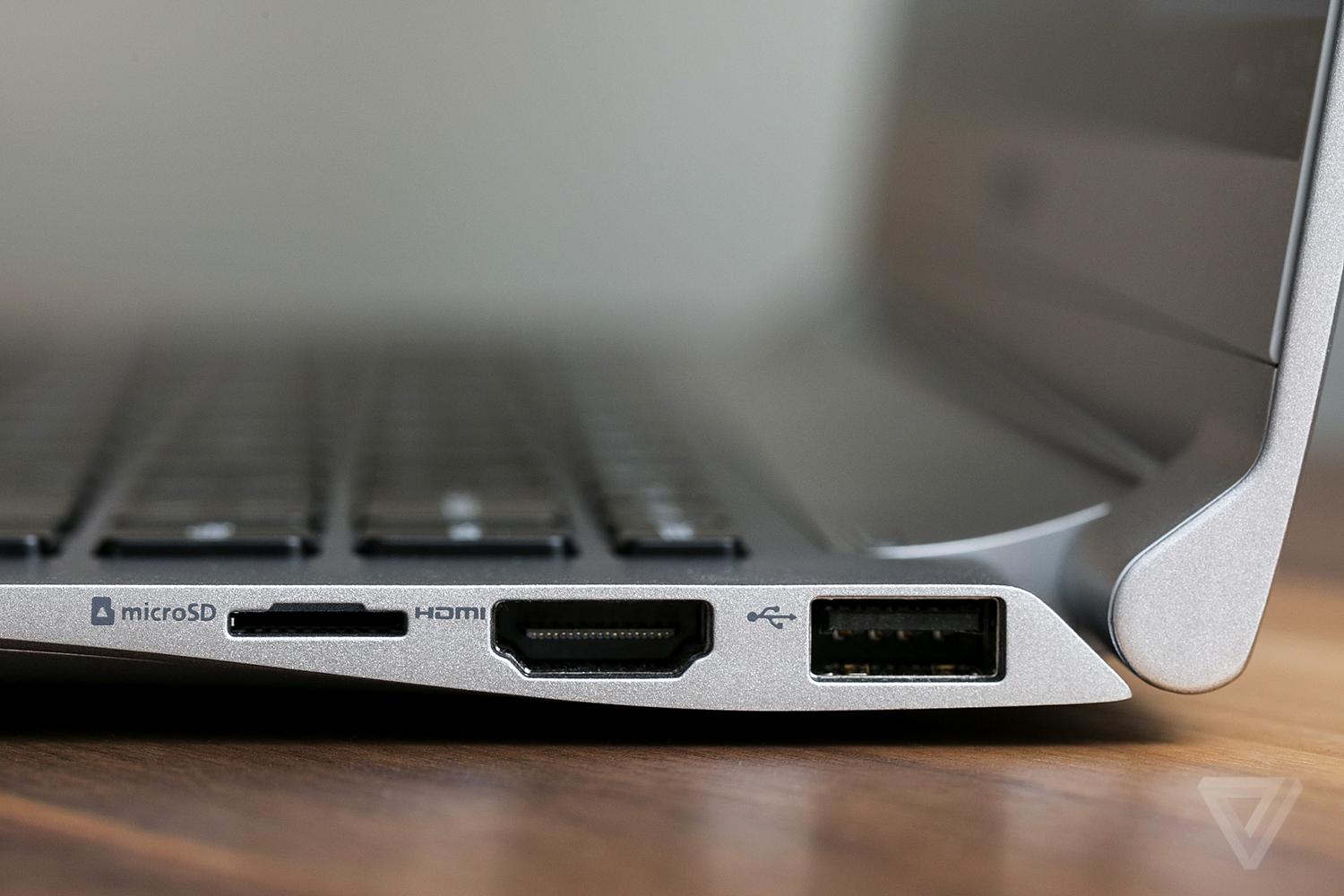 The Notebook 9 isn’t the best computer in any particular metric — it’s not the most powerful, nor is it the most portable. It doesn’t try to reinvent the wheel with a new form factor or grandiose thoughts on how many devices you should be able to plug into your laptop at once. But it does make you reconsider what a thin and light computer can be, and it proves that you don’t have to put up with a small screen just because you want something that’s easy to carry.