When the art team at Swedish studio Dice sat down to redesign Faith, the iconic lead character of Mirror’s Edge, for the upcoming reboot, it came up with a set of principles that defined her. She had to be elegant, for one thing, and she had to have attitude. Perhaps most importantly, she needed to be believable.

As it turns out, those same guidelines also applied to other aspects of the game, including the design of the sprawling city it takes place in. Mirror’s Edge Catalyst is set in an impossibly clean futuristic city, yet despite this, ensuring it was realistic was a key facet to helping players buy into the game’s fiction.

“The city needs to feel like a place that can actually exist,” says art director Jhony Ljungstedt. “We don’t want the player to run around and start questioning, why does this look this way, or why does that building look so strange.” 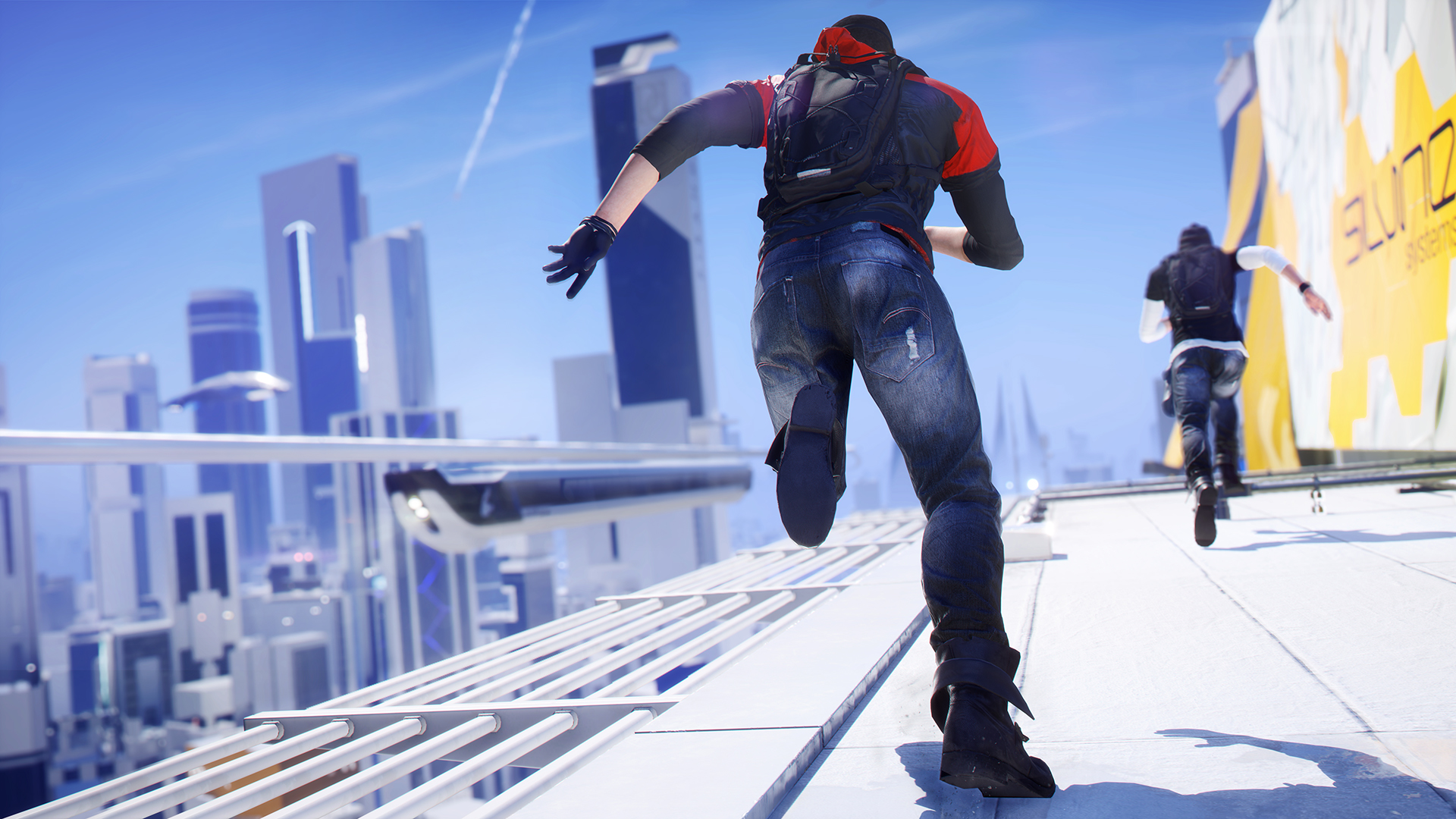 Like the 2008 original, Mirror’s Edge Catalyst takes place in a near-future metropolis, and stars Faith, a sort of rebellious messenger known as a runner. She uses fast reflexes and parkour-like tricks to zip around the city, delivering packages while running and jumping across rooftops. But whereas the original was a straightforward affair, with levels that pushed you down a specific path, the sequel is much more open. Faith can now make detours to take on side missions, search for hidden collectibles, or just explore. The previously unnamed metropolis from the original is no more: now it's the City of Glass.

That shift to a more open game means that the team at Dice has to be more wary of creating a city that actually looks and feels like a functioning place. Now that you can explore it from different angles, the developers have less control over what you see in the game. Because of this, the team started by looking at real cities to create a foundation that was based in reality. The City of Glass is heavily inspired by Asian cities like Singapore, Tokyo, and Shanghai — places that, even in 2016, feel futuristic. They also have a sense of verticality that’s ideal for a game like Mirror’s Edge, where you spend much of your time leaping across tall buildings.

"Those cities have very interesting architectural shapes and forms," says Ljungstedt, "as well as how they build out the infrastructure." The team started out by focusing on the foundational aspects of the city, like having a functioning road grid and districts that were laid out in a way that made sense. From there, it built on that core by adding more detail.

One of the most important aspects of the City of Glass is its varied terrain. Though you’re primarily running along the rooftops of skyscrapers, you’ll also be ziplining up and down, moving from high to low as you try to find the fastest route from one point to the next. "The way I look at a city is the way I look at nature," Ljungstedt says. "[In nature] you have mountains, you have valleys, and the same principle can apply to a city. We worked with that, and tried to create these mountains and valleys, so you could get higher up and read the space and try to find different routes."

Those vantage points are especially important in Catalyst, where the more open nature means it’s much more likely players will get lost. But the City of Glass is filled with specific spots where you can get up high to get your bearings and survey the concrete jungle around you to formulate a plan. Figuring out how to get around also comes down to the little details. Faith has a wide range of abilities at her disposal — she can run along walls, jump over huge gaps, and slide under obstacles — including a type of augmented reality view called "runner vision" that lets her see the ideal path to her destination. 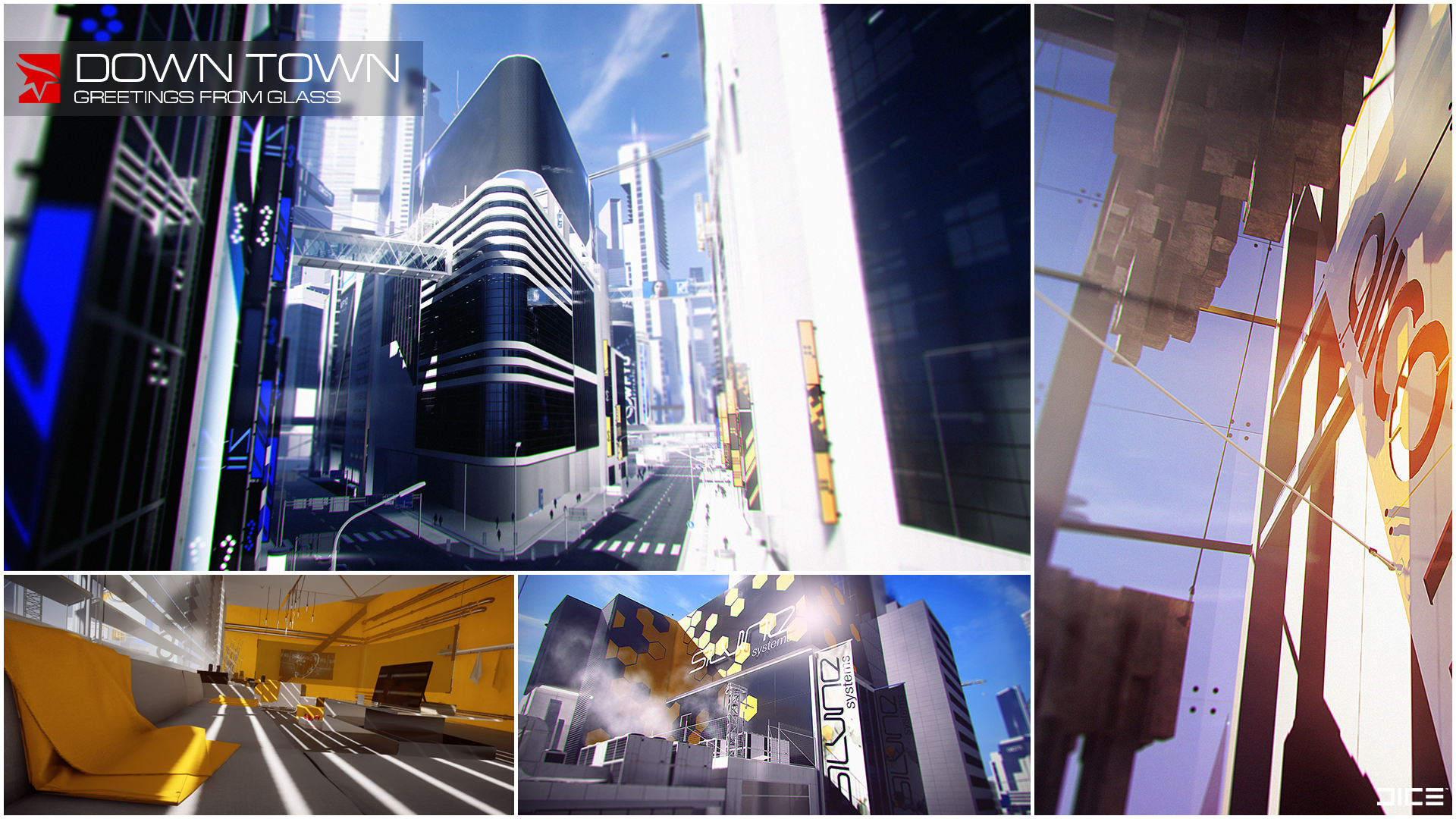 Even still, just looking at a location without the runner vision on can give you a good idea of how to proceed. Especially after you’ve played for a while, you’ll notice parts of the environment that can help you get around; an air duct of a certain height that you can vault over, a wall you can run across, or a ledge that’s just within reach. After a time it becomes intuitive. However, there’s a balance between giving players the knowledge they need to navigate a space, and not making it feel like a place that’s been designed for a video game. It’s something Ljungstedt calls "the rhythm of details," the art of placing objects in just the right way. "Your eyes sort of connect those lines together," he says.

"This world has a history and it has a future."

Outside of how it facilitates the gameplay, the city also feeds into Catalyst’s narrative. Like the original, the new game is set in a world where gleaming white buildings hide a dark underbelly where monolithic corporations have a stranglehold on the city. To help show this, the City of Glass has been divided into multiple districts, each showing a different aspect of society.

The Anchor district is full of both huge corporate buildings and bustling nightclubs, for instance, while the quieter Ocean Glass View area is where some of the more affluent citizens live, separated from the dregs of society. Each section has its own look; the Anchor is full of neon lights ripped straight from Tron, while the View is much more peaceful, with muted pinks and purples. The downtown core, meanwhile, is a slightly grimier place, much like the city from the original Mirror’s Edge. "This world has a history and it has a future," says lead designer Erik Odeldahl. "The different parts of the districts have been built to accommodate that story."

That said, even with the disparate areas of the city, there’s still a common visual style holding it all together. "This is a white and bright and shiny world," says Ljungstedt. "That’s the key component for everything we make in this game. Everything needs to feel white. That together with the color accents makes up the visual style of the first game, so that was important for us to use. But then we tried to incorporate different shapes and different forms. In one area you might use more angular shapes to cast different silhouettes, in another area we’ll use more heavy shapes, larger buildings, more vertical lines. A third area could be closer to water, to make it seem more inviting and soothing."

Many of these are details you might not even notice as you play. In many ways, Mirror’s Edge Catalyst is a game about speed, and it’s easy for the world to blur around you as you focus on your goal of getting somewhere as quickly as possible. And while the City of Glass has been created with that in mind, full of plenty of different routes to help you get around, it’s also been designed in a way that the developers hope will make you want to slow down from time to time.

"Even though the game is about racing, there’s also almost like a tranquil feeling to the city," says Odeldahl. "It’s elegant, it’s nice to look at. Players tend to stop and look at a lot of stuff."