Google Home: a speaker to finally take on the Amazon Echo

Share All sharing options for: Google Home: a speaker to finally take on the Amazon Echo

For the past year and a half, the tech world has been recovering from Amazon's surprise announcement of the Echo. Now, Google is finally doing what everybody wanted it to do: release a competitor. It's called Google Home, and it's coming out later this year for an unspecified price. You can sign up to be notified for updates at the Home website.

Mario Queiroz is the executive behind the project. His title, VP of product management, is the sort you hear a lot. But you know him better as the man who has launched the only truly successful living room product Google has ever launched: Chromecast.

You can think of Home as his next act. It's essentially what you'd expect if you were looking for Google to create an Echo competitor. It's a small speaker you plug into the wall with always-listening, far-field microphones that can hear you from across the room. It'll answer your questions, play your music, and control some of your home automation gadgets. To hear Queiroz tell it, the Home will be better at most of those things than the Echo. 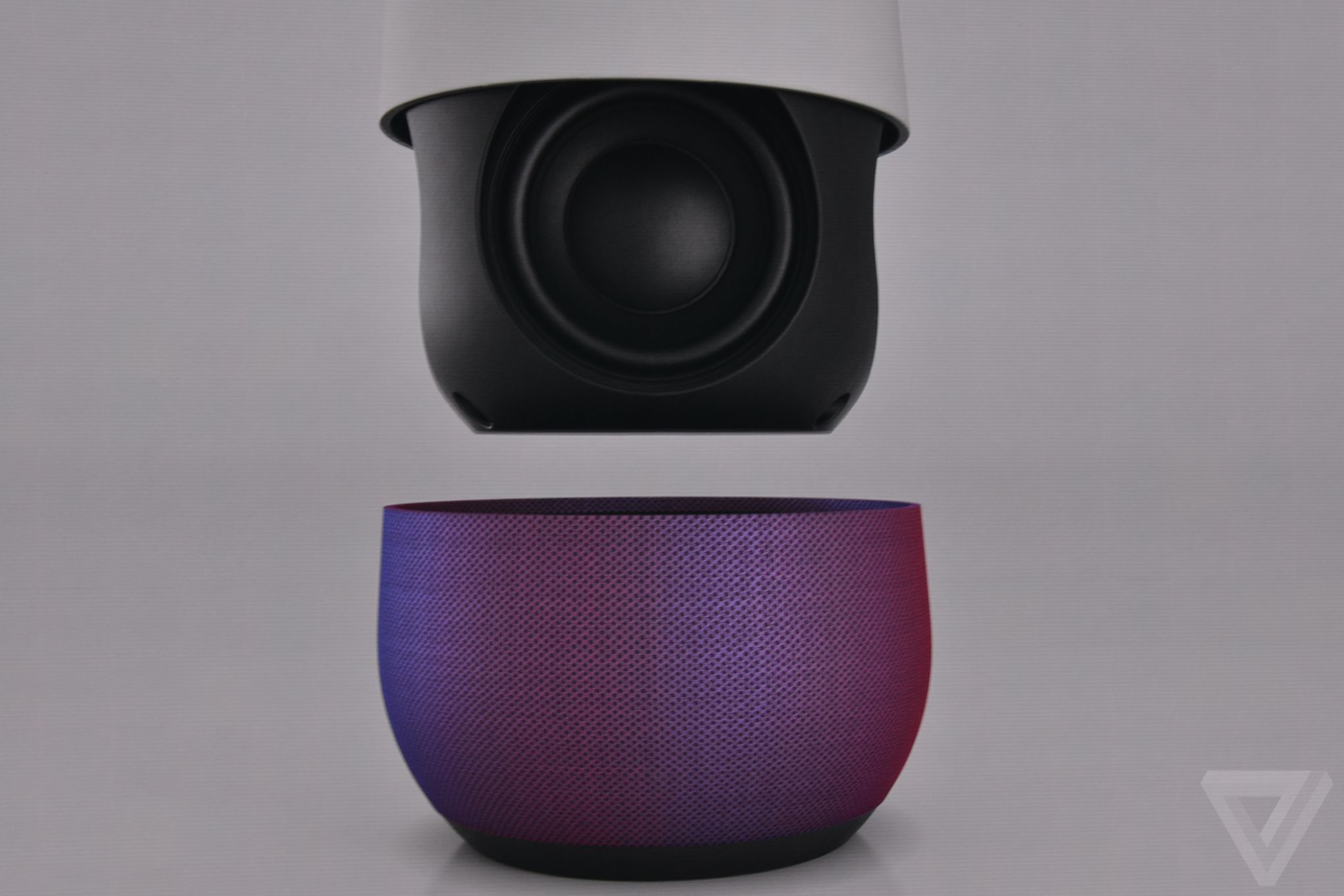 It's a good-looking little device

Physically, the Home is a small, approachable little cylinder with an angled top. The speaker bows out a little, and overall it's quite cute. Like Google's OnHub router (which, really, probably should have also had Google Home's capabilities if Google were smarter), it has a modular case that you can customize with different base shells to match your decor. It will also have some LED lights that dance around a bit to let you know it's working.

It's not portable, but the benefit of always being plugged in is that Google can make a more powerful speaker. Quieroz says that it "really fills the room" and that it will have "strong bass and clear highs." That's important, because one of the main use cases Google is foreseeing here is listening to music. The Echo isn't great at that.

Another thing the Echo isn't great at: having more than one. But Google Home is designed with multiple rooms and speakers in mind from the start. And because it's using the basic Cast standard, you can talk to any speaker and tell it to play music on other speakers, just like you can with Google Cast Audio. It will work with Google Play Music, of course, but it should also be able to handle any other service that supports Google Cast, like Spotify.

Multiple rooms, but not multiple accounts

Compatibility with Cast gives it another smart ability: it can talk to the Chromecast you have plugged into your TV, playing YouTube clips and anything else you can think to ask for.

Unfortunately, the Home won't support multiple Google accounts at launch, but the company says that will come in time.

The Home obviously lets you ask Google questions. Queiroz says that Google put a lot of time into thinking about how Google Home should respond to your queries. Its responses will be optimized for audio, giving just enough information without droning on too long.

There is one area where Home might not be as capable as the Echo, however, and that's when it comes to extensibility and compatibility with other devices and services. Google has chosen not to open up a developer API for its assistant or for this device just yet. Instead, Google wants to take some time to build out the ways that its assistant can act as the interpreter between your natural way of speaking and the way that bots need to be spoken to.

Quieroz admits that the Echo's wide array of skills is neat but says "then you start getting deeper and it doesn't work very well, then you're sort of disappointed. And I think that happens with Alexa sometimes."

It won't do as much as Alexa, by design

Instead, Google Home is going to work with a smaller set of home automation devices — Google wouldn't say which, but it will include at least some thermostats and lights. And it will be able to do all the stuff that Google's voice assistant can currently do (plus perhaps a bit more, we'll know when we get a chance to really try it). Fortunately for Google, that's quite a lot — thanks in no small part to the Knowledge Graph. It's a kind of super database that understands thousands of "entities" and their relation to one another. So if you ask for a basketball player's jersey number, Google can just give you the answer and then stand at the ready for more related questions without needing you to walk it through the current context.

Not having all the Echo's third-party abilities might put some off from Google Home, but Quieroz says he isn't worried — in fact he seems eager for the head-to-head competition. "We're competing feature for feature in most of the areas. And in the areas that really matter to the consumer, we're going to do a better job."