A week ago, astronomers used NASA's Hubble Space Telescope to take this striking image of the Red Planet as it was 50 million miles away from Earth. The photo shows Mars' rusty landscape, its polar caps, and clouds, with details as small as 20 to 30 miles across.

Mars is particularly photogenic this time of the year because, in a few days, the Red Planet and the Sun will be on exact opposite sides of Earth — a phenomenon called "Mars opposition." So in the photo, you can see Mars perfectly illuminated by the Sun.

On May 30th, Mars will be at a distance of 46.8 million miles from Earth, the closest it's been in 11 years. Mars oppositions happen every two years, but the distance between Earth and Mars varies because the planets have different orbits. The closest approach in 60,000 years was in 2003, when Mars and Earth were only 34.6 million miles apart, according to NASA. That record will stand until August 28th, 2287. 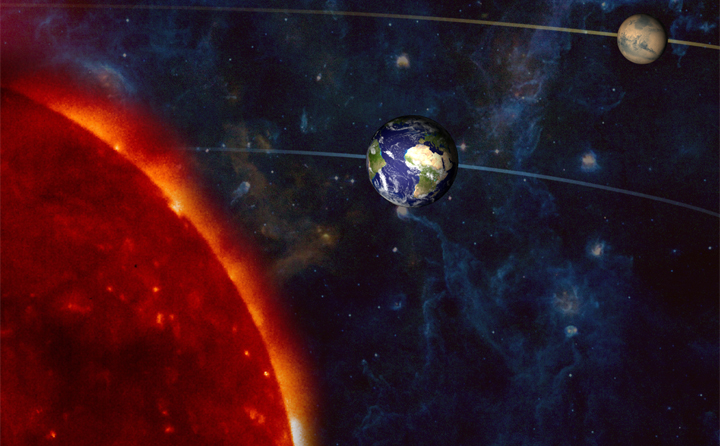 An artist's rendering of Mars opposition In December 2007. The distances between the Sun, the planets, and the distant nebula are not to scale.

The plan to start sending spacecraft to Mars soon

An artist's rendering of Mars opposition In December 2007. The distances between the Sun, the planets, and the distant nebula are not to scale.
Most Popular
From our sponsor
Advertiser Content From