Dangerous Golf, at its most base level, is about destruction. You are placed in an area filled with lots of breakable objects — a fancy dining room full of expensive silverware, or a gas station storeroom stocked with food — and asked to hit a golf ball in a way that demolishes as much as possible. You can bounce the ball off of walls, crash it through windows, or later on, light it on fire and ignite the stage like a powder keg.

The game is ridiculous and messy in a way that’s reminiscent of the PlayStation 2 era, before high-definition games were the norm, when crazy ideas for 3D games didn’t need a ridiculous budget, thousand-person teams, and risk-averse management.

That’s not to say Dangerous Golf is cheaper or ugly. It’s powered by a powerful modern physics engine that imbues it with a sense of realism; when you hit that antique vase, it shatters in a way that looks convincing. It's a modern-looking game imbued with a mix of fearlessness and strangeness that was common in the past.

“We’ve been creating gameplay that’s never been done before, guided by our own sense of stupidity,” says Alex Ward, creative director at Dangerous Golf developer Three Fields. “Until you’ve smashed up some toilets and jumped a golf ball out of a mop bucket, I guess you haven’t lived.”

Three Fields is a relatively new studio, formed in February 2014. Dangerous Golf is its first release, but far from the team’s first game; Ward, along with nine of the 11 staff members at Three Fields, used to work at Criterion Games, the studio best-known for the Burnout series of arcade racing games. Ward helped found the studio’s game-focused rebranding in 2000 and served as director on some of its most notable games, maintaining an important position even as the studio’s headcount ballooned.

"We wanted to go back to pure game making."

As the team sizes grew and Criterion shifted from making its own games to working on Need for Speed, following an acquisition by video game publishing giant EA, Ward and some of his co-workers — including Paul Ross, lead programmer on the ambitious open-world game Burnout Paradise, and former Criterion studio director Fiona Sperry — felt a desire to get back to the fun they had in those early days of game development. "We wanted to go back to pure game making," he says. In November 2013 he handed in his resignation and started planning for Three Fields.

Among the titles Ward directed at Criterion is the seminal Burnout 2: Point of Impact, which introduced "crash mode," a feature where time slowed down and players tried to smash into other cars to create as much damage as possible. It was a huge inspiration for Dangerous Golf. In fact, Ward likes to pitch his new game as "crash mode but with golf," and the description is apt. At the outset of each level in the game, you’re presented with a golf ball situated in a room that has all manner of things you can destroy. For your first shot, you can hit the ball in any direction, not just forward as in traditional golf games. The goal is to find just the right angle so that it will bounce around the room, causing an untold amount of destruction (as things explode, the game keeps a running tally of the monetary damage you’ve caused).

If you smash enough stuff, you get another shot, this time with a ball that is literally on fire. Then comes putting — each stage has a flag and a hole, sometimes many of them — which works just like in regular golf, except that you can bank a shot off of a gas pump or a kitchen stove. Making the final putt is important because if you miss, a huge cash deduction will be taken from your final score.

There are more than 100 levels to play through, spread across four distinct locations, including a fancy house, complete with delicate vases and expensive paintings, and a medieval castle full of treasures. There’s also a gas station where the pumps can cause some wonderful explosions, and a restaurant kitchen full of fun, messy goodies like pies and hamburgers. Some levels have buckets of paint, letting you make a mess of the walls; others have sinks and toilets that create strangely beautiful fountains when destroyed. There are multiple game modes, including co-op play and stages with time limits, and each level has three medals you can earn depending on your score. 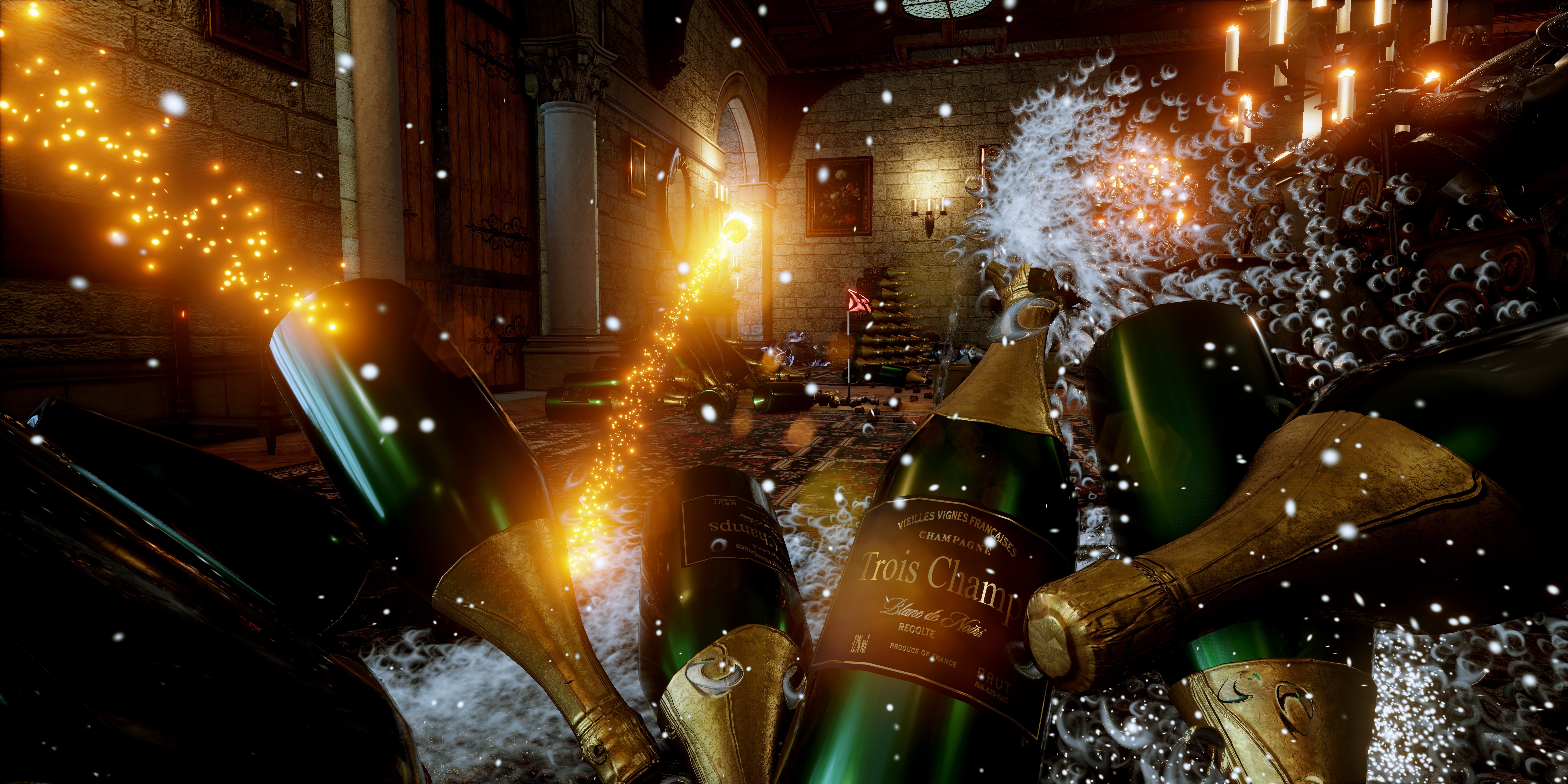 Dangerous Golf feels a bit strange when you first play it. There isn’t actually a club, you just point the ball in whatever direction you want and press the shoot button, and it will go flying with no visible impetus. You also have no control over the power of the shot. But even with this seemingly limited amount of control, each stage is ripe with possibilities for how you approach it. Dangerous Golf is not a game where you can just fire the ball blindly and expect success. Outside of the first few levels, if you’re not careful it’s easy for a ball to just harmlessly bounce around, coming to a stop having only generated a few hundred dollars’ worth of destruction.

In order to really wreak havoc, you need to carefully place your shots, planning out not just the destruction from the first shot, but also from subsequent ricochets and bounces. After a few hours, I started to get a feel for how the ball responds to the various items and surfaces featured in the game, but I still feel like I have a ways to go in learning all of the intricacies the levels.

Ward admits that he doesn’t actually like the sport — "I think golf’s boring, golfers are boring, and golf games made for golfers are boring," he says — but he notes that he’s a fan of mini-golf, which similarly encourages trick shots, and was an early inspiration for the game. The team was also inspired by NBA Jam and other arcade-style sports titles, games that didn’t seek to simulate a sport, but instead translate it to the world of video games. "I can only relate to a sport through games," Ward says.

"We need to do a lot more custard technology."

It’s an ambitious creation for such a small team, even one with the pedigree that Three Fields has. It’s also a big risk. Dangerous Golf doesn’t have a publisher and Three Fields hasn’t accepted any outside funding; instead the founders have bootstrapped the studio using their own savings. Ward says that he recently emptied out his bank account to help keep the studio going ahead of launch. "We’ve all made a lot of sacrifices to get this far," he says. "We wanted to work with complete creative control, and not waste a single moment having to go to meetings or any of that stuff."

Dangerous Golf is scheduled to launch next month as a downloadable title on the Xbox One, PlayStation 4, and Steam. And while it’s already an ambitious release in its current form, Ward says that he has some big plans for the game should it prove to be a success, with plenty more ideas for things that would be fun to hit with a golf ball.

"There’s a lot of things that we can’t do yet in terms of making a mess," he says, "particularly to do with water and making things sticky. The Magnolia Bakery in New York was an inspiration, but in order to pull that off we need to do a lot more custard technology. If we manage to stay in business, if players support our studio, I hope to really get to work on ice cream, custard, and chocolate sauce in the future."