VanMoof's connected bikes are easy to ride and hard to lose

The Electrified S now has a cheaper, lighter sibling with no motor

Riding a bike is supposed to be as easy as... well, riding a bike. But there are definitely barriers to owning and commuting with one, particularly in a big city. If you want a quality bike, one that won't break down over time, you have to spend a lot of money. Then you have to hope it doesn't get stolen. And while biking is a great commuting solution for some people, not everyone wants to show up to work out of breath and sweating through their clothes.

These are the problems that brothers Taco and Ties Carlier set out to solve when they started VanMoof about a decade ago. The solution they came up with is the Electrified S, a flagship model that the company has been teasing for a while. It's a bike with an electric motor and a suite of smart features that drastically reduce concerns about theft — including a guarantee that, if it gets stolen, the company will use the smart tech inside the bike to track it down and return it to you.

But the S is really just the beginning of what the Carliers see as a much more connected future for biking. Today the company will announce a new version of that bike with no electric motor. It's lighter, it's cheaper, and it has all the same smart features of the S — and we got to ride them both. 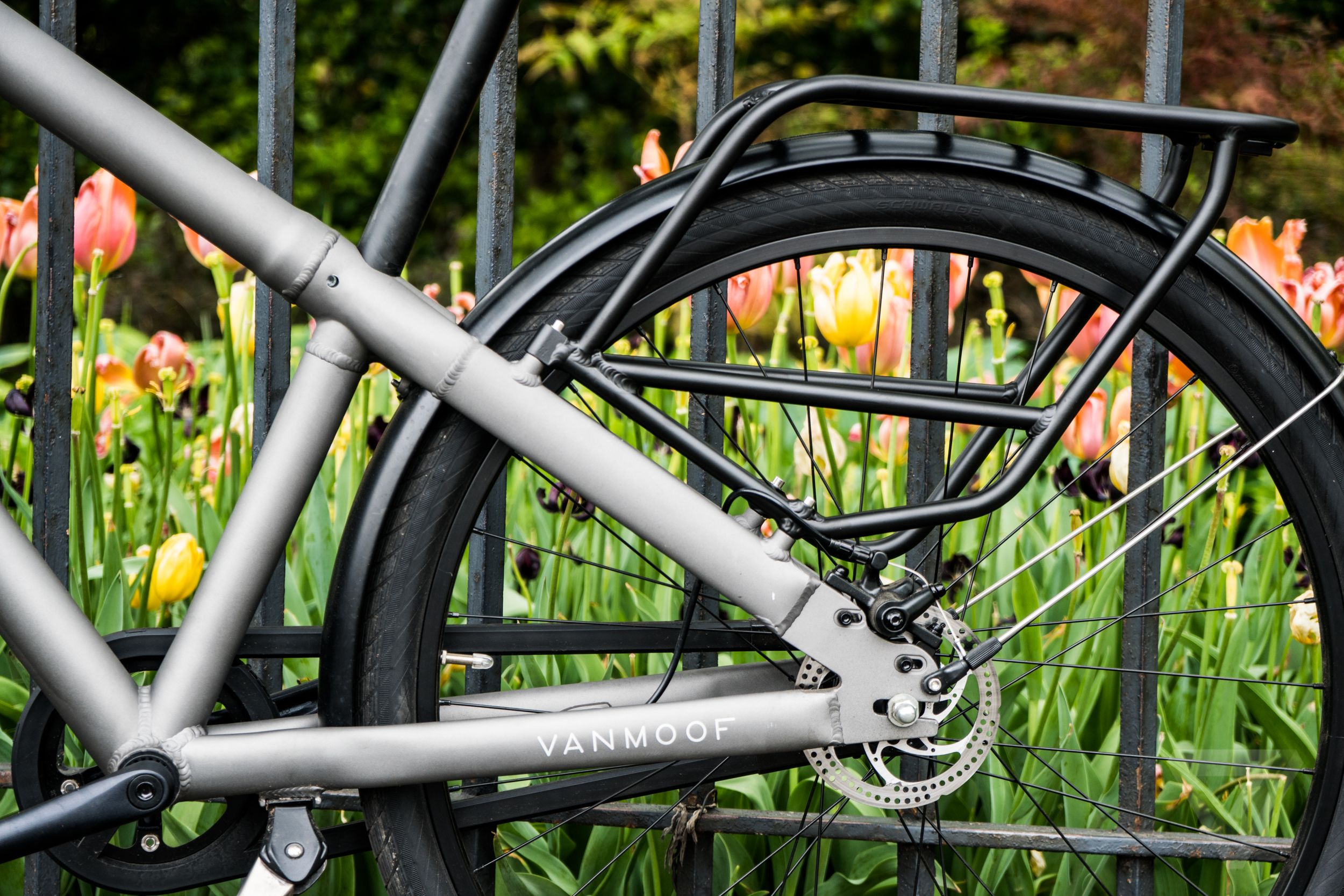 The brothers started (and continue to run) VanMoof as a self-funded effort, relying on the knowledge that they brought to the table. (Both are industrial design engineers, and Ties is an automotive mechanic.) They source parts from around the world but are assembling about 60 percent of the bikes at what Ties calls a "huge" plant in Utrecht — one that will help give back to the brothers' community. "We work with a lot of youths to train them, to get into the market as bike intuitionists and bike mechanics," he says.

"We tried to completely redevelop the bike."

The parts that make up each bike are manufactured in other countries, but VanMoof redesigned an overwhelming majority of them. About 80 percent of the Electrified S is custom, according to Ties. "We tried to completely redevelop the bike," Taco says during an interview with The Verge at VanMoof's sunny Brooklyn storefront. The brothers saw tons of money, research, and development go into racing and mountain bikes, but very little going into evolving commuter bikes.

"A lot of other people will just choose different parts that are already available and put together a bike, then invest a lot of branding," says David Shoemack, VanMoof's global marketing director. "Whereas what we do is we reimagine every single part of the bike, and then work with different partners to produce that."

That process isn't easy, or short. Ties says it took about two and a half years to finish designing the Electrified S. 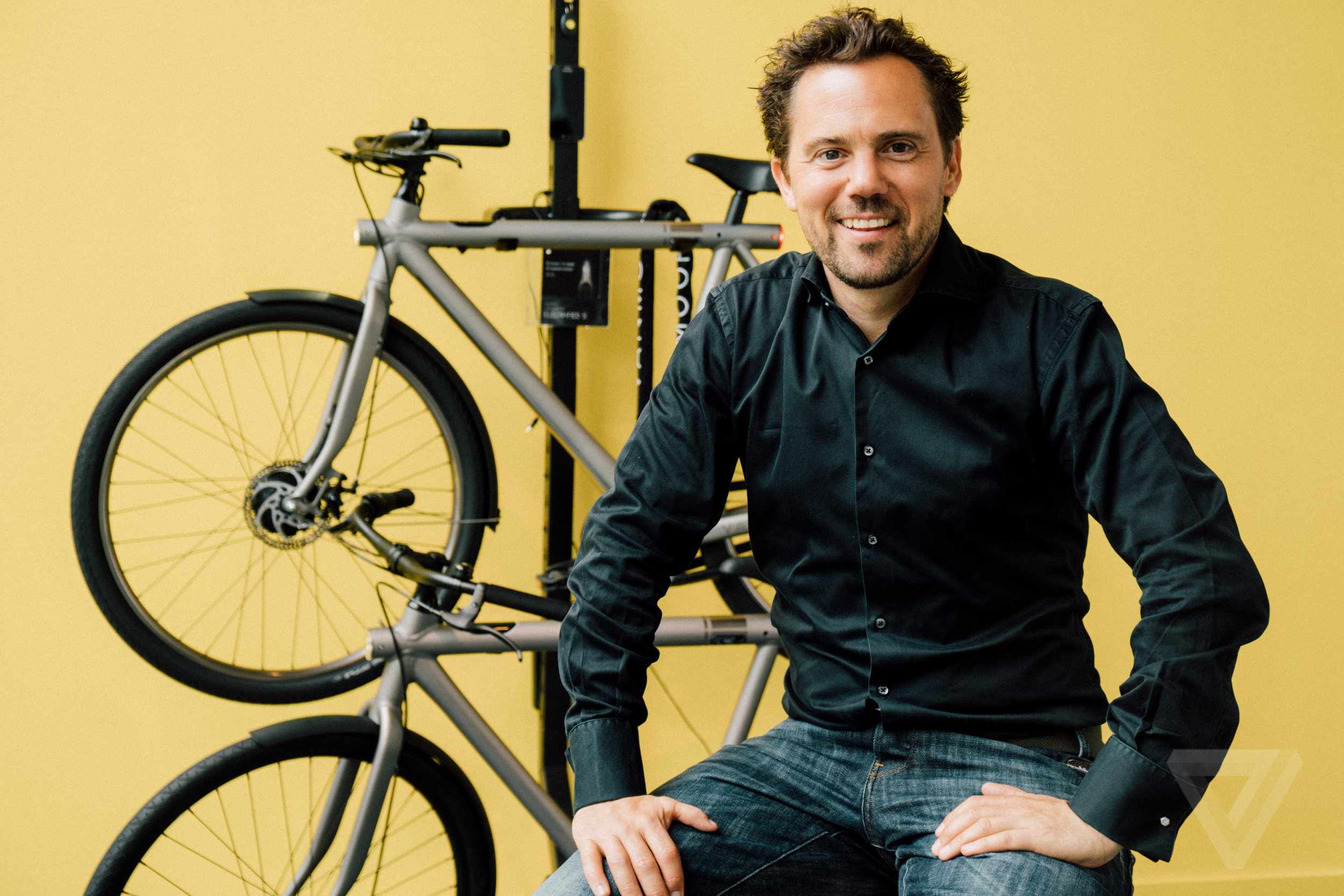 Taco Carlier at the VanMoof store in Brooklyn.

But the custom work that goes into the Electrified S shows, from the moment you set eyes on the bike to when you hop on and start riding. The bike's distinct look is amplified by a bright LED headlight and red taillight found at each end of the frame — something VanMoof has done since its very first bike. There's a small screen embedded into the frame, too, which can show you your speed and the bike's battery life. (VanMoof says the bike's 420Wh battery can last up to 75 miles depending on which power setting you use and how much you pedal.)

Most electric bikes on the road today have either been converted — shops take old bikes and slap on a motor, a battery, and a throttle — or come with bulky modular batteries and electronics. VanMoof stuffed the electronics and the battery inside the frame, so there's nothing rattling around while you pedal. Instead, the Electrified S offers a remarkably smooth ride. The motor — which you can set to different power modes, or turn off completely — eases in very gently after about a half-rotation of the pedals. Unlike other electric rideables, it doesn't jolt forward. It makes for a more pleasant experience, for sure, but even in the low power settings you have to do less work just to get going. As The Verge's Thomas Ricker said when he rode it earlier this year, "it’s like being twice as powerful at just the push of a button." 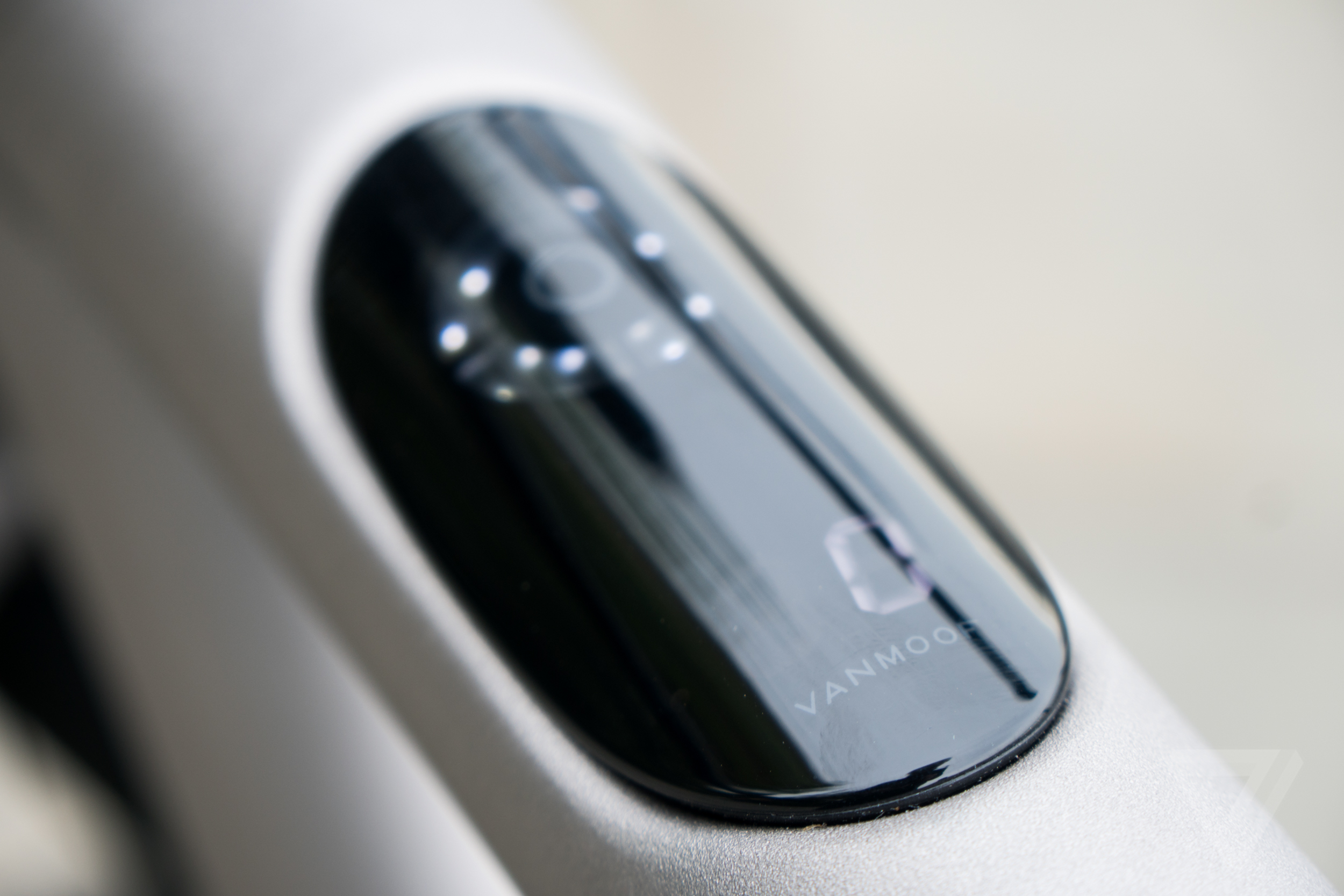 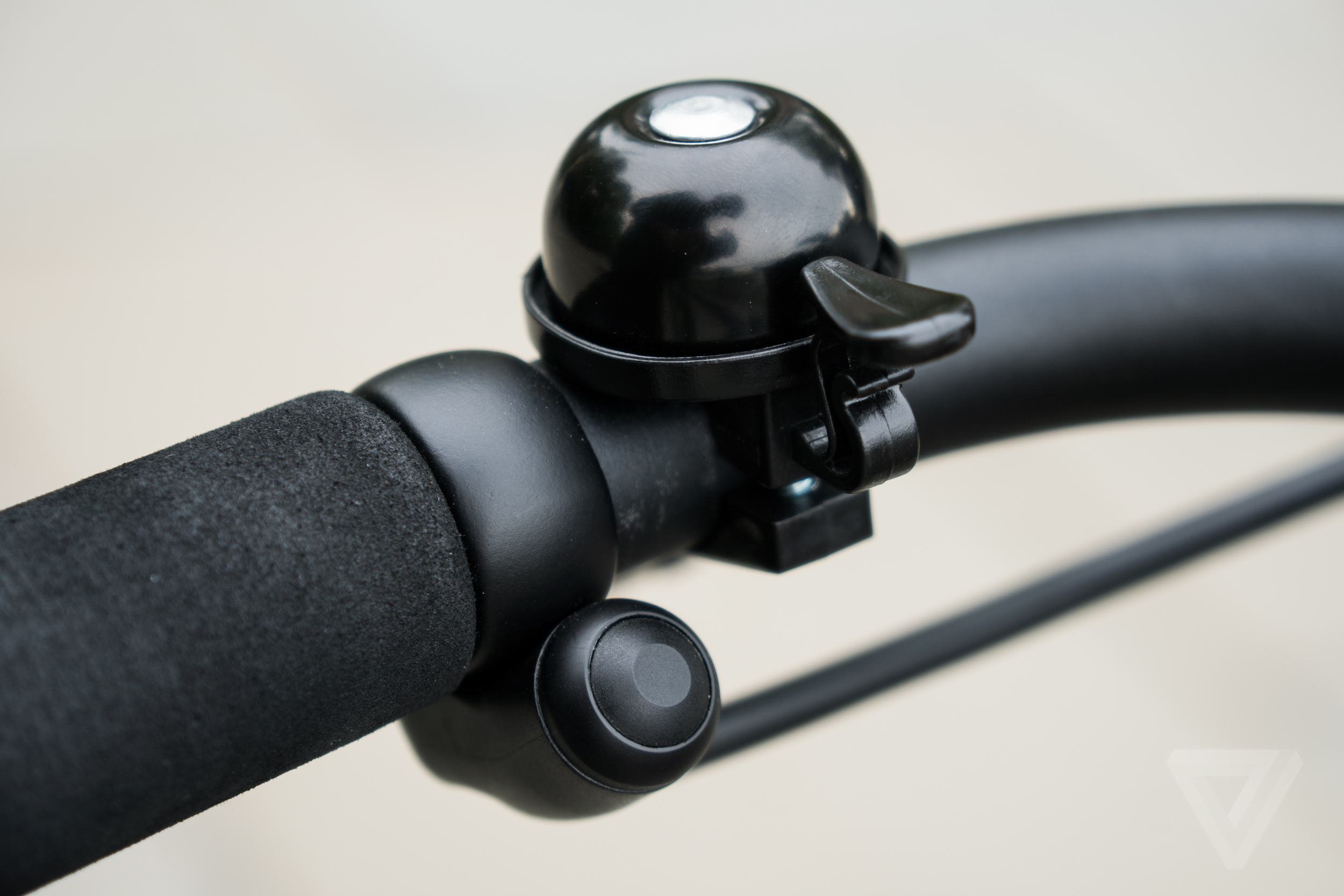 If you are looking for a jolt, a small rubber button under the left handlebar provides an extra boost of power in any riding mode. But make no mistake — this bike is electrically assisted, meaning you won't be able to just use the motor to power you around. You have to do at least a little bit of work.

That said, you'd be hard-pressed to tire yourself out on the Electrified S. It made easy work of hills big and small during my afternoon with it in Brooklyn. The bike also has two gears, though it hides them from you — there is no shifter on the handlebars. Instead, the S will automatically switch to the higher gear once you get above about 15 miles per hour.

If you don't feel the need for an electric motor, VanMoof's new SmartBike is the lighter, cheaper option. It's a more traditional bike in the sense that all the power comes from the rider, and you have just three gears available via a twist shifter on the right handlebar. Even though there's no motor, it rides a lot like the Electrified S, because it feels wonderfully and solidly put together. Neither bike is cheap — the Electrified S will retail for about $3,000, and the SmartBike will cost about $1,000 less — but VanMoof is providing a high-quality product.

The SmartBike, like the S, is much more than a traditional bike, because both share a range of smart features, almost all focused on security. This starts with a smart locking mechanism that's built right into the frame on the top tube. The bikes come with a heavy-duty chain lock that plugs right into this mechanism, and it requires the use of the VanMoof app or a keychain fob to unlock.

You can lock the bike up using just the frame because the rest of the bike has been locked down with special security bolts. (VanMoof provides a matching tool kit so you have access for repairs or maintenance.) This way you don't have to run the chain through the front tire and around the frame, and you also don't have to worry that — even if you locked it up properly — your bike will be ransacked for the spare parts.

If your SmartBike gets stolen, VanMoof will get it back

The coolest security feature only comes into play if and when your SmartBike actually gets stolen. Each bike is equipped with not only a Bluetooth radio (which allows it to connect to your phone), but a cellular radio as well. If your SmartBike gets stolen, VanMoof can use that radio to find your bike, something the company calls the "Peace of Mind" guarantee. If your bike gets stolen, you're just a button tap away in the app from being connected to VanMoof's 24-hour support desk. VanMoof will use the information from the GSM radio to aid local authorities in finding the bike — or they'll go find it themselves for a fee of $98. If they don't recover your bike within two weeks, they'll ship you a new one. 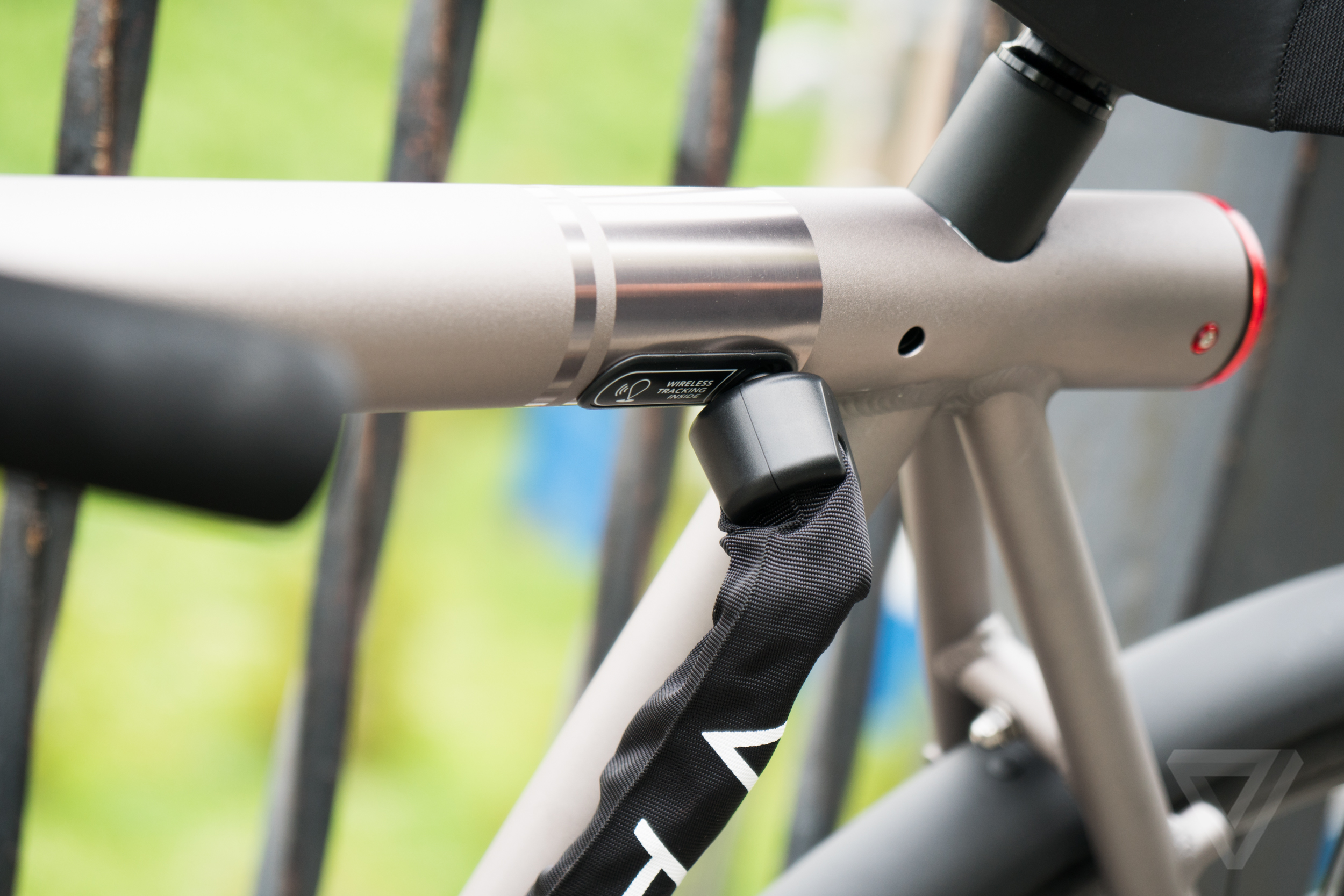 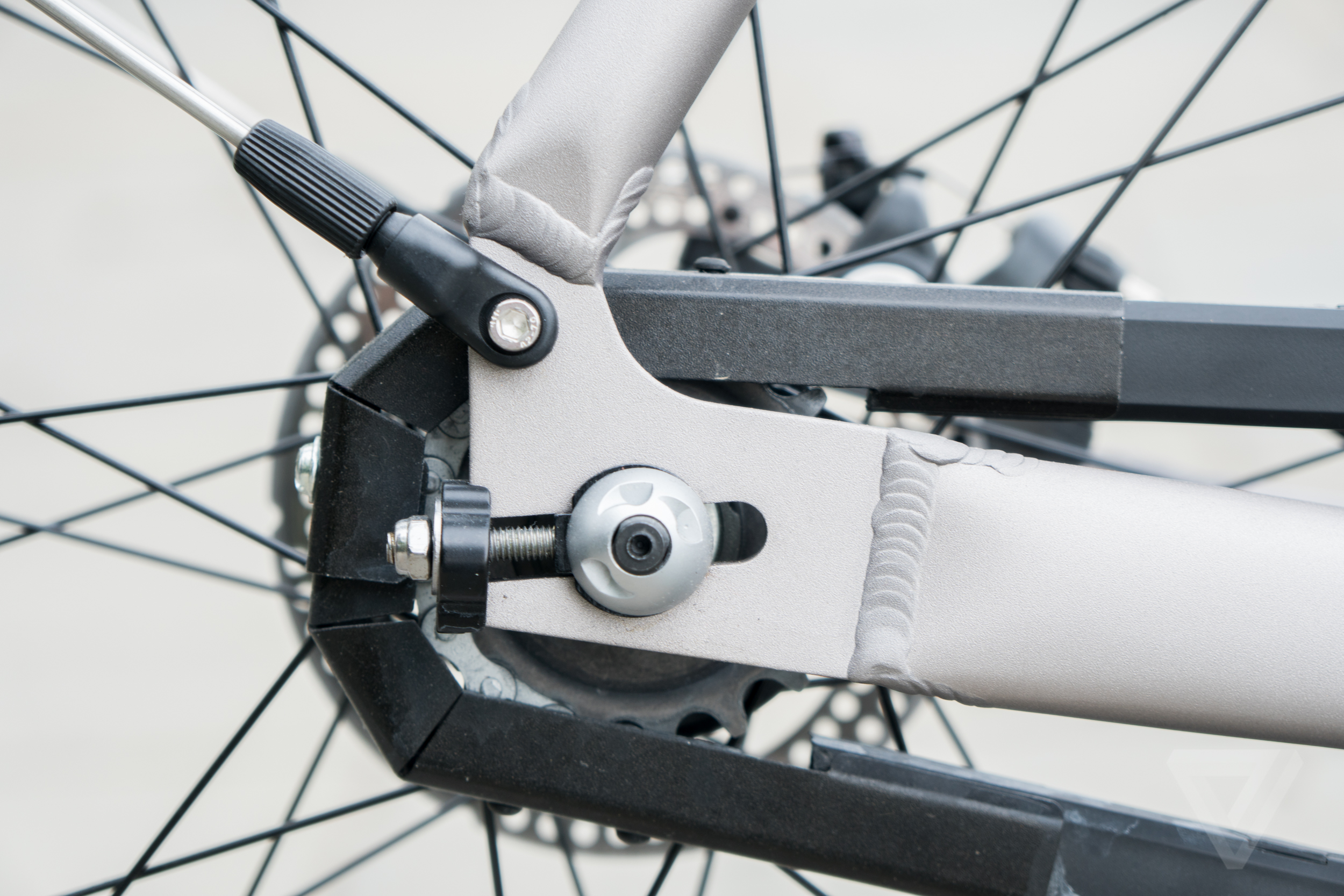 It's a good idea, because even with the special bolts and the smart lock, some of these bikes are bound to be stolen. VanMoof says it's been running a stealth pilot program around the world for the last two years with about 300 prototype versions of the Electrified S. Nine were stolen, but the company recovered each one.

If you're wondering why you can't just track the bike in the app by yourself, you're not alone. Hell, it would be nice to be able locate your bike just in case you forget where you locked it up. But there are a few reasons why VanMoof isn't enabling that functionality — at least for now.

For one, the company doesn't want its customers putting themselves in harm's way by confronting a bike thief alone. "We definitely don't want people knocking down doors themselves to try and get a bike back," Shoemack says. "That's going to cause all kinds of problems." Right now, VanMoof doesn't want to deal with the liability and public image headaches that could result from that scenario.

It's not as simple as a "find my bike" feature

But, according to VanMoof, a more prohibitive factor might just be cost; since they locate the bikes using GSM and not GPS radios, the company has to pay for data costs. (The company is partnering with Vodafone at launch.) Allowing every bike to constantly transmit data could sink a self-funded company like VanMoof, at least in the near term. "We have to keep the data costs low," Taco says, "so we cannot track them if they’re not stolen."

If the preorders of the Electrified S are any indication, the company could be staring at some significant sales numbers. VanMoof says that, when it opened up the preorder page in April, the company was receiving requests at a pace of about 500 per day for the first few days. They were coming in from all over the world, too: Netherlands, Germany, the UK, Norway, Italy, and of course, the United States. Shoemack says that VanMoof doubled its goal for the entire month of April in the first six hours alone. "We actually have a bell upstairs. We decided that every sale counts and we ring the bell after every sale," he says. "People were shutting the doors on us."

Electric bikes aren't a terribly new idea, but the nascent market is completely devoid of a recognizable brand. That's doubly true with smart bikes. VanMoof has a chance to come into the market with two attractive and aspirational (if not supremely affordable) products and dominate. And as the tech gets cheaper, so could VanMoof's bikes. It's a plan that appears to be working for Tesla, which started selling the Roadster in 2008 for more than $100,000 but launched the $35,000 Model 3 this past spring.

The comparison isn’t lost on VanMoof. "Tesla shows that you have to basically do everything differently and much better to really change the market, to break through a market," Ties says. "In that way we’re a bit the same."

Thomas Ricker contributed to this report.