What is LitRPG and why does it exist?

What is LitRPG and why does it exist?

When MMOs become fantasy novels, stats and all

I like good fiction. I promise I’m literate. But I spend most of my book time listening to "okay" sci-fi, fantasy, and mystery novels on Audible. I pepper in classics and non-fiction, but nothing spends my Audible credits better than pulp about magic swords, brain implants, and private detectives.

A couple weeks ago I'd finished or abandoned all my existing audiobooks, and decided to find something new for the commute. On a whim, I typed in "cyberpunk" in the Audible search bar to see if there's something I've missed. What I found was not cyberpunk. It was this: 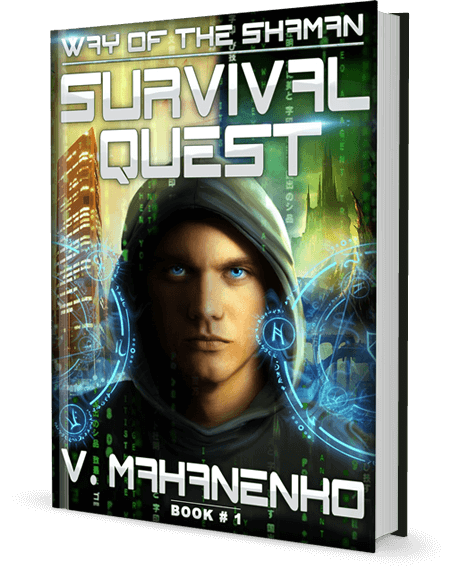 Survival Quest (The Way of the Shaman: Book #1), by Vasily Mahanenko.

Here are things I dislike about this book at first glance:

If there's one thing I've learned about books, you can and should judge them by their covers. The aesthetic judgements of the publisher gives you a lot of info on what you’re about to put in your brain.

But the book did have two things going for it:

So I bought the book. And everything changed for me.

Look, the idea of going inside a WoW-style MMO as a plot element in sci-fi is not new to me. I have a couple books in my Audible collection with this trope: Daemon, by Daniel Suarez; Halting State, by Charles Stross; and Ready Player One, by Ernest Cline. I also have a real paper copy of Neal Stephenson's Reamde on a shelf somewhere, but who has time to read books with eyeballs?

Survival Quest was different, though. It's not a book about shared online experiences, or about the blurriness of real / virtual distinctions. It's not even really "science fiction," in the sense that it doesn't seem to be posing any questions or what-if scenarios for an imaginative reader to unpack.

No, Survival Quest is about what MMOs are actually about: grinding experience and gear. It's a novel about the pleasure of leveling up.

Literally. The protagonist (egotistical and flavorless, as I assumed), is imprisoned in a full immersion VR capsule to serve out his prison sentence in an MMO copper mine. He feels pain fully from every rat bite, and the exhaustion of chipping away at mining nodes all day, but he also feels an addictive euphoria when he levels up his character's jewel-crafting skill.

MMOs are typically sold to us as grand fantasy adventures, but they're really and truly about min-maxing. Sure, you can turn your brain off for a while and follow some quest lines. Maybe even read the NPC dialogue. But when it's time to get serious you pull open your stat sheet and start reading. Video games hide the "dice rolls" that used to be so obvious in tabletop RPGs, and it's the gamer's job to rediscover the math behind their success and improve upon it.

Survival Quest is a terrible novel. Unlikable characters, casual sexism, and a plot completely bent to the main character's progression — far beyond the usual flex I allow in any Frodo-inspired fantasy novel. But it also includes stuff like this:

How could I not love it? I blazed through the first novel, dedicating every free moment to listening. Then I bought the sequel: The Kartoss Gambit. And then I was out of monthly Audible credits, so I went and got AlterWorld by D.Rus on Kindle Unlimited.

D.Rus is actually credited with creating the "LitRPG" genre in his Amazon bio, but it's hard to tell exactly. I haven't found a definitive history anywhere. These MMO-in-book-form novels are apparently popular in Russia, Japan, and Korea, and mostly written by authors of those nationalities in their native languages — the versions I have of both Survival Quest and AlterWorld are passable English translations from Russian.

I haven't finished AlterWorld yet, so I can't speak to how genre defining it is, but it does have the most important part:

If I can extrapolate the whole LitRPG scene from Survival Quest, I'll say this: it's the most perfect depiction I've ever seen of what I truly want from an MMO, and what I'll never have. The fiction here isn't the grand fantasy environment and plot, it's the idea of a game where I'm always leveling faster than I thought I could, meeting challenges I think I can't beat and then beating them, finding hidden quests and talking to never-before-seen NPCs. Survival Quest is a fantasy about having a hyper-immersive MMO, with a multi-billion dollar budget, played by millions of people all around the globe, being all about me.

This past weekend I reactivated my 'World of Warcraft' account

I've given up on childish fantasies of finding the One True Sword, or destroying the Ring of Power — those are myths. But video games are real. I've turned dollars into in-game gold, I've read the wikis, I've spent hundreds of hours grinding, I've abandoned work and family responsibilities, and I've ultimately quit in frustration. All because I want to be the hero of a virtual world. It's not going to happen for me. But that's exactly what happens to the protagonist in every chapter of LitRPG.

An MMO can't ever meet our power fantasies, because we all want to be god. And, if you subscribe to Kant's categorical imperative, you'll know that will never work out: if everyone's The Hero of Azeroth, no one is.

This past weekend I reactivated my World of Warcraft account and rolled a new character. It's not a shaman. I'm having a good time.