Smartwatches that don’t actually need a smartphone to function seem poised to be the next hot thing in wearables. Samsung’s already attempted this with a couple of its Gear watches — most recently with the Gear S2 3G — and Google just announced a revamped version of Android Wear that promises to make the smartwatch more independent from the smartphone.Android Wear 2.0 won’t actually be available until later this year, but we can get a taste of some of its independent features with LG’s Watch Urbane 2nd Edition LTE right now. The Urbane 2 (as it will be referred to throughout the rest of this article, because that full name is ridiculous) is unlike any other Android Wear watch in that it has its own cellular connection and doesn’t have to rely on a Bluetooth tether to your phone. As noted, it’s not the first smartwatch with this functionality, but it is the first model with Google’s software to have it.

If you haven't been following the Urbane 2’s saga, it was originally announced and launched late last year, then swiftly pulled from shelves because of a “manufacturing issue.” LG presumably resolved the issue and the watch returned to stores this spring.

A cellular connection on your watch means that you don’t have to carry your phone around with you to use the watch’s smart functions. All other Android Wear watches become little more than dumb watches if they aren’t connected to your phone over Bluetooth or in range of a Wi-Fi network. But the Urbane 2 can use its cellular connection to enable its smart features when you’re away from Wi-Fi and don’t have your phone with you. Voice search, notifications, messaging, even phone calls are available from your wrist wherever you are. 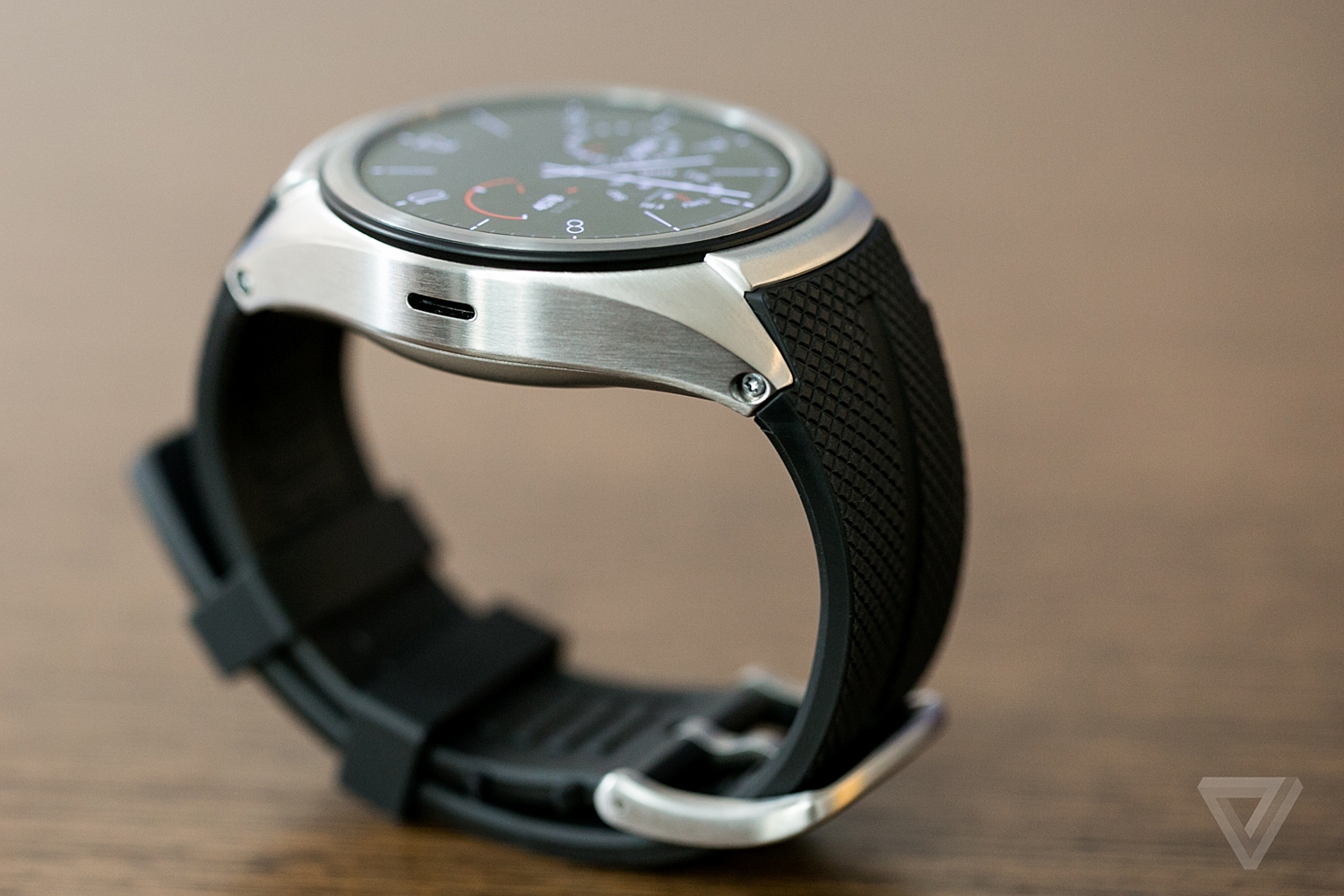 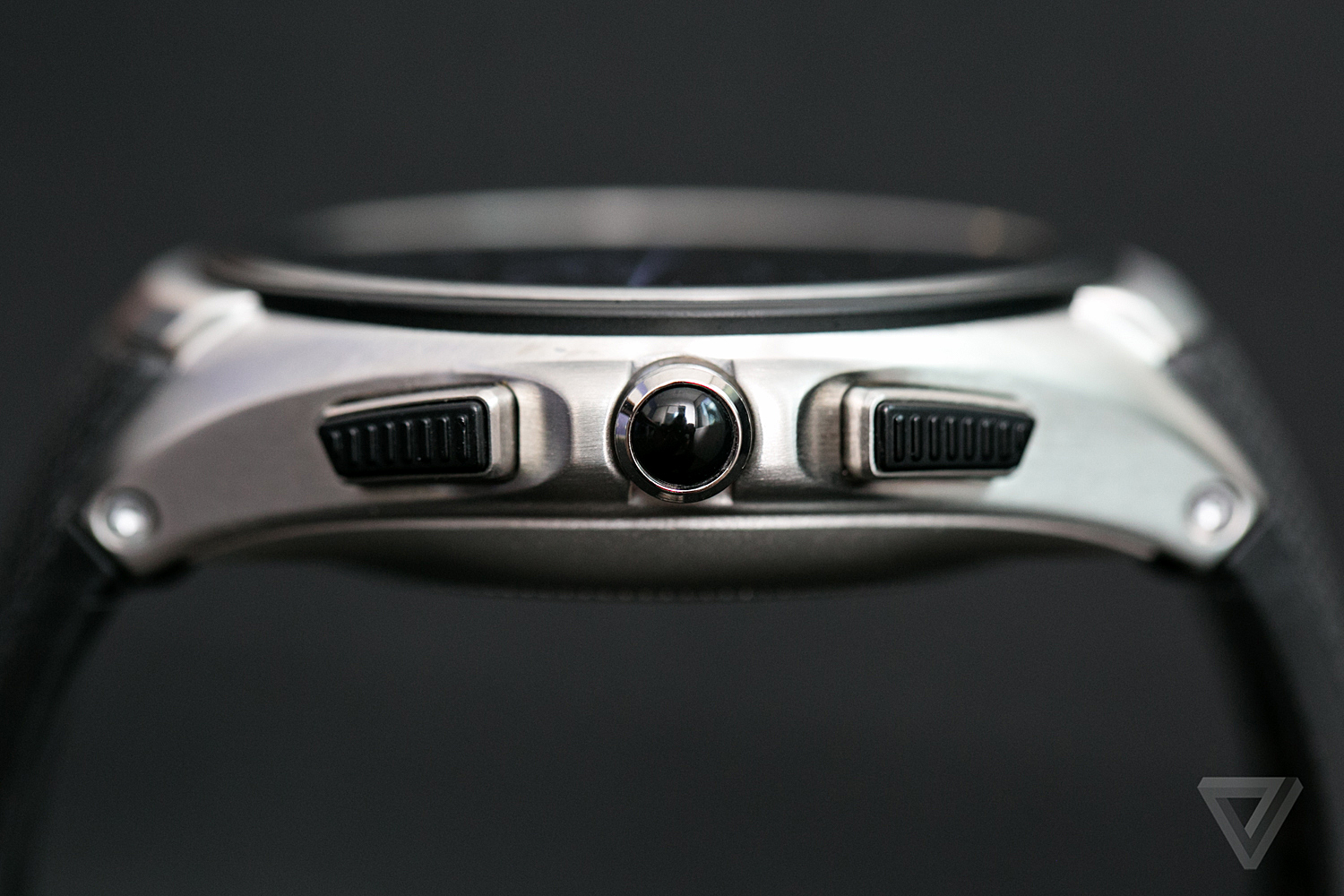 But this freedom comes at a very high cost. The Urbane 2 is available from AT&T and Verizon and frankly, it’s expensive. AT&T sells it for $359.99, but you can get for $199.99 if you commit to paying for two years of data service on it. Verizon’s model is even pricier: its $499.99 or $449.99 with a two-year contract. Both carriers charge monthly fees on top of your phone’s service for the watch’s data connection: $5 per month at Verizon and $10 per month at AT&T. Unless your watch is made of gold, it’s almost surely not worth these prices. The Urbane 2 is made out of steel, rubber, and plastic.

Cellular freedom comes at a cost

Here’s how its cellular features work: if you go out and happen to leave your phone at home and connected to Wi-Fi or cellular, the Urbane will let you do all the same stuff as if your phone was in your pocket and paired over Bluetooth, provided it was already set up and paired to the phone. (The phone is necessary for set up and installation of any apps or watchfaces to the watch.) You can receive new notifications, use apps, perform voice searches, and even answer phone calls and reply to messages with emoji, your voice, or canned responses.

But if your phone isn’t connected to Wi-Fi or cellular for whatever reason, the Urbane 2’s functions become much more limited. It will still let you access offline functions (timers, alarms, activity tracking, etc.) but any "online" features such as app notifications, voice searches, weather alerts, or navigation will not work. The AT&T model will let you make and receive calls and texts in the watch’s "offline" mode, but the Verizon version will just let you answer incoming calls.2

Note that these scenarios apply when using the watch with an Android phone. It is much more limited when it’s used with an iOS phone and not connected directly via Bluetooth. 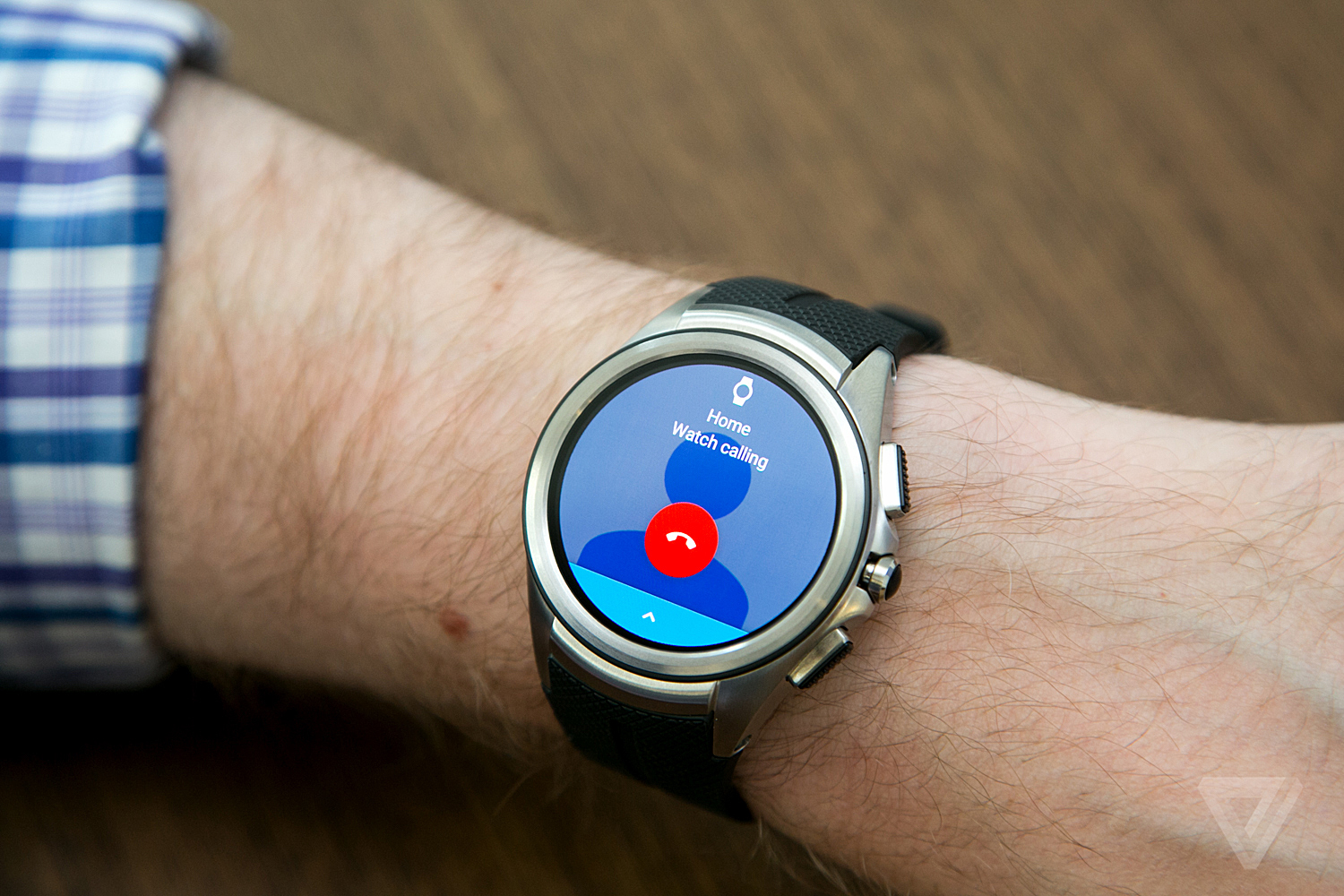 I’ve been using the AT&T model with a Samsung Galaxy S7 Edge. The Urbane 2’s cellular features have worked as advertised: if the watch isn’t connected to my phone via Bluetooth, I can still use virtually all of its functions. AT&T’s NumberSync service makes it easy to send and receive calls and messages from the watch, syncing my messages and routing all calls through my main phone’s number. But it’s slow when connected to a cellular network compared to Wi-Fi or Bluetooth to my phone. Apps take longer to load data and voice searches and transcription can take an inordinately long time.3 Notifications that ping my phone show up on my watch, but I can’t do much other than delete the occasional email or dismiss the notification entirely.

I’ve noticed that most of the time when the watch is connected to cellular networks, it is using the slower HSPA network, as opposed to the faster LTE service. That leads me to believe that it doesn’t have full support for all of AT&T’s LTE frequencies, and is likely the cause of the performance bottleneck I’ve experienced. 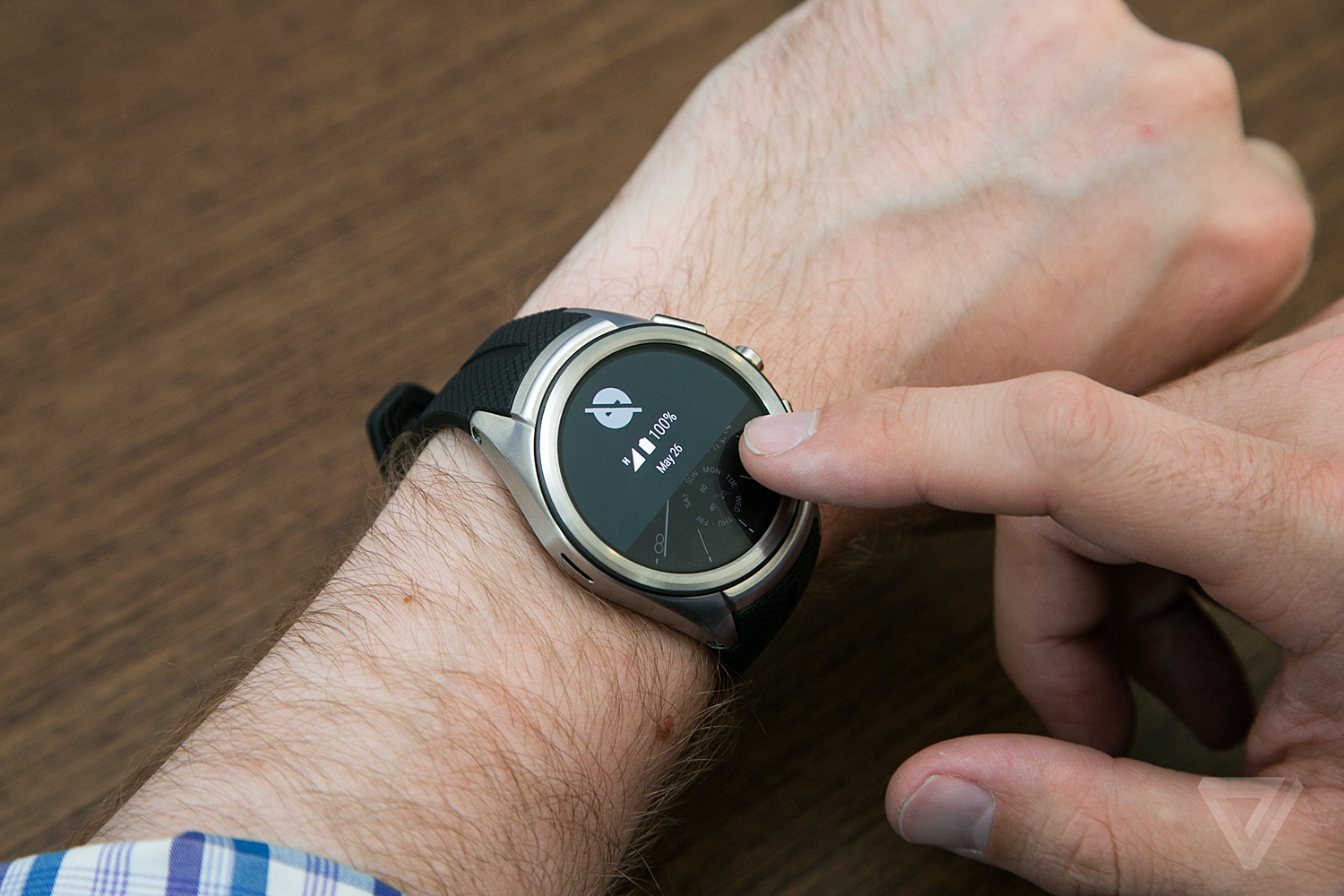 That functionality is rather limited and it’s hard to justify the Urbane 2’s subscription cost for it. It might be appealing to avid runners that want to remain connected without a phone strapped to their arm (like other Android Wear watches, the Urbane 2 has 4GB of onboard storage for music and can stream to Bluetooth headphones and it can use location services to track your run), but since most people have their phone with them at all times anyway, the Urbane’s features are often redundant.

As a watch, the Urbane 2 is thicker, larger, and heavier than others, such as Motorola’s Moto 360 or the Huawei Watch. Its 1.38-inch, fully round display is very sharp — LG boasts that the 480 x 480 pixel P-OLED’s 348PPI resolution is the highest you can currently get on a smartwatch — and often looks great, but it can still be difficult to read outdoors.

The Urbane 2 is thicker, heavier, and less comfortable to wear than other smartwatches

The fixed (read: you can’t change or customize it) rubber strap is stiff and uncomfortable on my wrist, and it often leaves marks on my skin. The Urbane 2 has two extra hardware buttons not found on other Android Wear watches, which are set to launch the contacts list and LG’s fitness tracking app. But they aren’t programmable, and I didn’t find either of those functions very useful in my day to day routine.

Battery life, which is a major concern with all smartwatches, let alone ones with cellular features, is strong enough to last a full day even with always-on screen features, and LG has added a power-saving mode to extend it further. The Urbane 2’s stamina on cellular networks has been much better than Samsung’s Gear S2, in my experience, but it’s still something that needs to be charged every night. 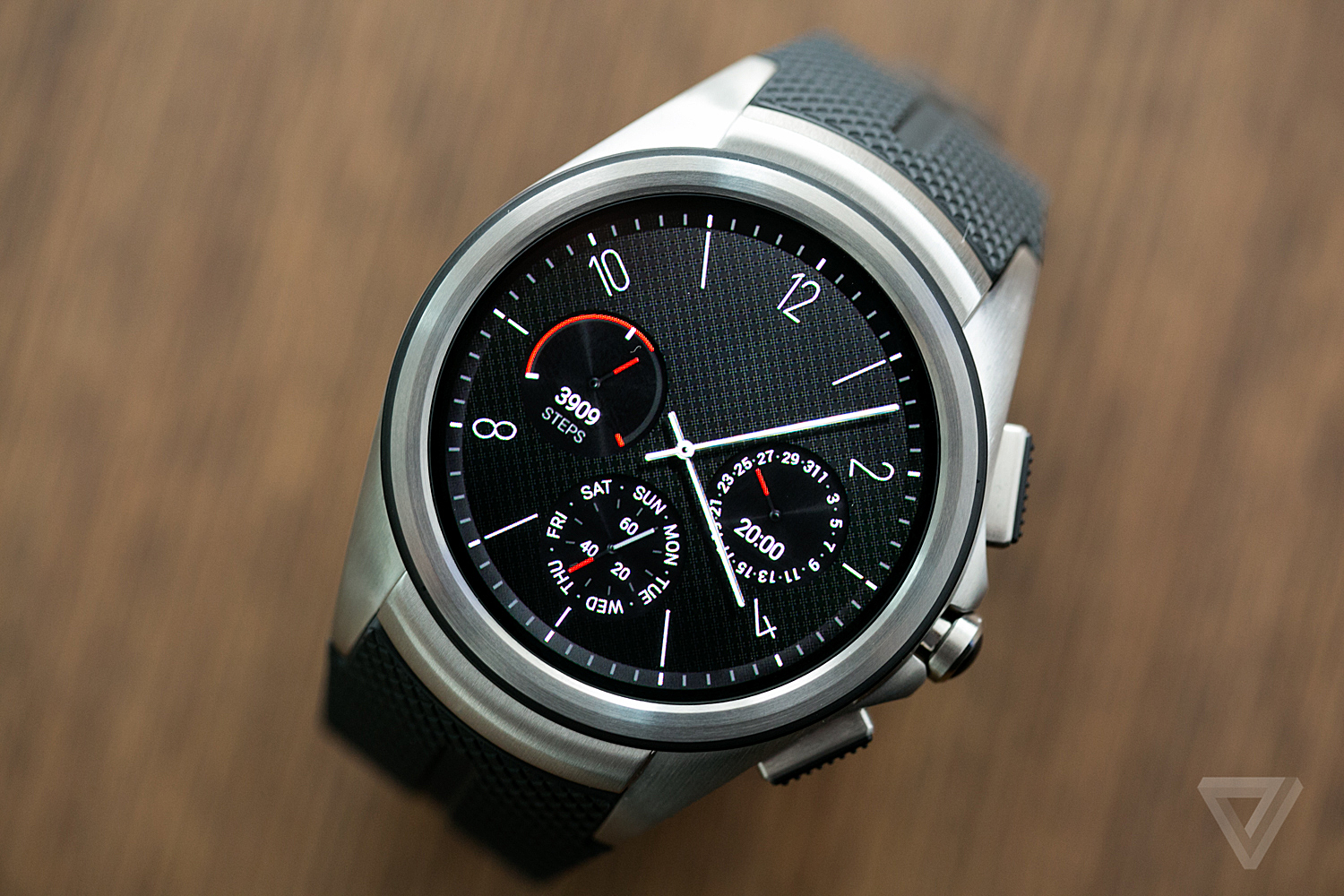 So here’s the best way to look at the Watch Urbane 2nd Edition LTE: it’s a preview of what’s to come. Android Wear 2 promises to greatly expand upon a cellular connected watch’s abilities, allowing you to use all of its functions without a phone and even install apps directly to the watch itself. It will make using an Android Wear watch with an iPhone a much better experience, and it might even justify your carrier’s monthly service fee for the watch’s cellular features. It’s very likely that the Urbane 2 will receive the update this fall (developers can already install a preview of it on the watch now), and there will certainly be new cellular Android Wear watches hitting shelves around that time, too.

The Urbane 2 is a preview of what's to come

But for now, the Urbane 2 is a bit too large, a bit too expensive, and not differentiated enough from other Android Wear options to justify its higher cost and monthly fees. If you desperately want a watch with a cellular radio, wait until this one (or the next one) comes with the software to actually make that useful.