The Bachelorette, illustrated: welcome to The Chad Show

The Bachelorette, illustrated: welcome to The Chad Show

The competition heats up in Week 2

The Bachelorette producers wasted no time in setting up this season's villain — Chad, a protein powder-guzzling alpha male, embodying the misogyny of Gaston from Beauty and the Beast, and the daily caloric intake of Michael Phelps.

Tell me, have you ever met a Chad who wasn't a total douchelord? I dare anyone to step up with even just one solid example of a good guy named Chad.

The dude is obviously overcompensating for something, because we start off the episode with a shot of him doing pull-ups with a luggage bag full of whey protein powder chained to his waist. There are a lot of things to unpack (lol) about this. 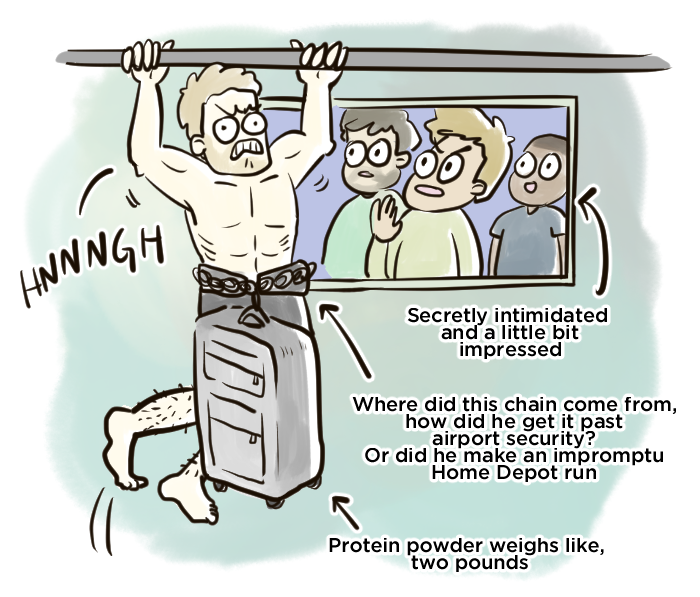 And because this is a Bachelorette recap on The Verge dot com, I can't let the opportunity pass without suggesting that Chad should have used this smart connected luggage bag that weighs nine pounds instead.

We then move onto the first challenge, which is the classic "save the damsel-in-distress from a burning building" exercise. Grant has an unfair advantage here, being an actual firefighter and all, and is the first to win a one-on-one with JoJo. In the interest of fairness, I propose that the next Bachelorette group activities explore the other professions of the rest of the contestants, mainly the "Hipster" and the "Canadian." (Copy Editor's Note: I was actually super upset to see the "Hipster" go. I guess I'll never know what it means to be employed for being (arguably) cool.)

But wait! The part of the challenge where they hack away at shapes on the ground with axes looked pretty familiar, like the most fun Mario Party game of my dreams:

Moving on! Derek is the first to have a one-on-one date with JoJo, in which they have to make a series of tough decisions ("The first of many!" Derek chirps with just a tinge of desperation) like "Sky or Sea" and "North or South." The whirlwind day ends on them having a romantic dinner by the Golden Gate Bridge, where they reminisce about just what a great, spontaneous day they had! My favorite part of The Bachelorette is when they pretend like their dates aren't completely preplanned and every minute detail down what leafy vegetable will get stuck in their teeth during dinner hasn't already been decided for them.

The next day, JoJo & co. find themselves at ESPN, where they stumble upon a taping of SportsNation. JoJo says some stuff about sports ("Sports: I like 'em!" -JoJo, basically) and all of the guys are like, "WIFEY MATERIAL!" And that's exactly what they do: practice proposing to JoJo with a giant rose and cheesy one-liners.

Chad rolls his eyes and makes petty comments about each of the guys' lines, but when it's his turn to woo JoJo, all he does is pout about how he can't possibly find anything nice to say about her. He calls out the other guys for claiming to love JoJo, despite not knowing anything about her yet. True! Chad is making a surprising amount of sense here, as if he himself is not a person who decided of his own volition to enter a reality dating competition show. What other inconvenient truths will you drop on us, Chad?

Other highlights of the episode:
– All of the guys singing their warbly campfire song about JoJo
– Wells fainting during the firefighter exercise is literally me in every gym class ever
– Chad snapping his fingers reenacting the guys "confronting him slightly," West Side Story-style
– The fact that James Taylor is literally a muppet: "A smile is the only thing from the inside that you see on the outside!"
– I have no idea what Luke is saying 90 percent of the time, as he is a chronic mumbler who talks like he's got a mouth full of luncheon meats. Also let's talk about his leather jacket, which is straight out of Dad Depot.
– Grant's description of food quantities in classroom terms: "Chad has eaten enough tonight to feed a kindergarten class. Maybe even fifth grade." Why stop there, Grant? Why not a community college ESL class?