Fujifilm X70 review: the little camera that can

What if you took one of Fujifilm's best cameras and made it smaller?

Share All sharing options for: Fujifilm X70 review: the little camera that can

I recently went on a long vacation to Belize. It was one of those rare trips where everything went smoothly, and it was a legitimate break from my everyday life. But I was incredibly anxious before I left — not because I was afraid I'd forget my passport, or that my allergy to bee stings would ruin my vacation. Instead I was worried about answering the most important question I ask before any trip I take: which camera do I bring?

Last year when I spent some time driving around the American Southeast, I forced myself to bring one camera: my Fujifilm X100s. I chose to leave everything else — my DSLR, my lenses, my camera bag — at home. I traded versatility for the constant availability of a camera that was much better than my phone's camera. I had that camera around my neck everywhere I went, and it allowed me to shoot confidently whether I was walking down Bourbon Street or ducking under the Saturn V at NASA's Space and Rocket Center.

I wanted that same experience this year, but my X100s feels old and sluggish now — the autofocus especially — so I wasn't thrilled about the idea of bringing it with me on this trip. I was going to be on boats and walking through jungles — not exactly situations where you want to wait for a the camera to catch up to your instincts. I wanted something small and light that also wouldn't force me to sacrifice image quality. Luckily, Fujifilm has a new camera that takes almost all my favorite things about the X100s and sneaks them into an even smaller body: the Fujifilm X70.

The $700 X70 is a distillation of Fujifilm's current camera lineup. You can find little bits from basically each of the company's cameras in it: the tilt screen from the X-T1 and X-T10, the "auto" mode toggle switch from the X-T10, the 16-megapixel APS-C sensor used in basically every camera (except the new X-Pro2). And each of these things have been fitted into Fujifilm's most portable package to date. Put all of those features together and the X70 looks like the perfect travel companion.

The X70 won't comfortably fit in your pants pocket, but it's small enough to toss in a bag or jacket, and it's light enough to not be a bother when it's hanging around your neck. It doesn't feel much more cumbersome than a really big smartphone, and yet it's still very easy to use. (I was always accidentally hitting buttons on the relatively small Fujifilm X-T10, but the X70's layout somehow feels much less cramped.)

I hated using the X70 at first

Of course, I hated using the X70 at first, mostly because it's missing the one thing I love about all the other Fujifilm cameras: the viewfinder. I rarely use the rear screen with my X100s, and instead prefer to spend my time buried in the viewfinder while I shoot. Since the camera has a fixed lens, I have to do more work to compose every shot, and so I feel it benefits my photography to stay focused. Lining up a shot with the rear screen when my camera is out at arm's length just feels too casual for what I like to use dedicated cameras for.

This was a big growing pain for me with the X70. I'd pull the camera all the way up to my eye before I remembered that there was nothing for me to look through. After a while, though, I adjusted to using the tilting rear screen. It's not that I don't like them — I've grown accustomed to (and even enjoyed supplementing my viewfinder shooting with) these kinds of screens on cameras like the Olympus Pen-F or the Fujifilm X-T10.

But it wasn't until the X70 forced me to use one that I really started to love the idea because of the freedom it affords. I was able to carefully frame up shots of of the dogs that roam the beaches of Belize without squatting on the ground; I could lean the camera out over the side of a boat and snap the picture I wanted without rattling off 20 images in hopes that I'd catch the right one. Looking back on the photos from my trip, so many of them feature perspectives I never would have captured with my eye glued to a viewfinder. I have the camera's design to thank for that.

The tilt screen also makes it easy to inconspicuously shoot from the hip, especially because of how small the camera is. With the screen tilted up, and a relatively silent shutter, I was able to take photos with the X70 while it was slung around my shoulder that I never would have captured if I was using a viewfinder. A tilting rear screen is never going to close the gap between having a camera with interchangeable lenses, but it adds enough versatility that I felt more well-equipped with the X70 than I would have with my X100s.

The one truly new feature on the X70 is this rear screen is also touch sensitive. It's the first on a Fujifilm camera and honestly that shows — it's one of the camera's biggest faults. The performance just isn't there, especially when swiping between photos that you've taken. The images stutter when you swipe and, if you've shot a bunch in a row, it can be really hard to tell whether or not you've actually made it to a new image.

This is Fujifilm's first touchscreen, and it shows

The new touchscreen also boasts tap-to-focus and tap-to-shoot features, but they're too slow and unpolished to rely on. The bigger problem, though, is there's a toggle switch on the right side of the touchscreen that lets you change between tap-to-focus, tap-to-shoot, or turning both options off. My thumb kept accidentally swiping over this, and when I'd go to tap the screen to focus on a subject I'd wind up shooting a burst of photos I didn't even want in the first place. Pinching and zooming is the only action that works really well.

Even with these issues, the X70 is an enjoyable camera to use. The touchscreen doesn't mar the experience too much because there is a host of physical buttons and dials to play with, and eight of them are customizable. You can navigate the entire shooting experience without ever using the touchscreen, and when you settle into that routine the camera always feels up to the challenge. The battery is good enough for the requisite 300-or-so shots, and Fujifilm has even made it possible to charge the camera via Micro USB, which is a welcome addition.

There's a magical feeling that comes from producing DSLR-quality images with a camera body this small. I liked the X70, and I love the challenges that come when shooting with a fixed lens. But I did come back from my trip wishing I had brought along a second camera. There was so much more I wanted to photograph but couldn't because the X70’s 28mm lens was just too wide, like the iguanas that were climbing the tree limbs outside our cabin, or the howler monkeys we stood underneath in the jungle.

The X70 didn't let me get every shot I wanted

I'm glad I wasn't lugging around a full bag of gear, but something like the Sony RX100, with its increased zoom range and ultra-portability, would have been worth the tradeoff of being stuck with a smaller 1-inch sensor. At the very least, it would have made a great companion to the X70 without taking up too much space.

Of course, I came back with more photos than I took on my vacation last year, so I can't really complain. The X70 was a more fun and less obtrusive camera than the ones I typically shoot with. It's not the perfect travel camera, but it's one of the best.

Our review of Fujifilm X70 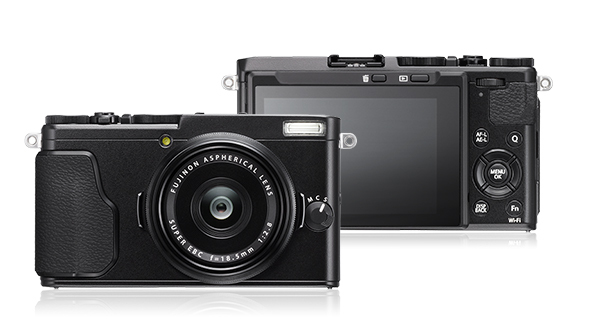