The Kindle you want, but not the one you buy

My favorite way to test any e-reader is to see if I still like using it when my reading material isn’t exactly thrilling. For the past week, I’ve been using Amazon’s newest Kindle to get through a book called Oh Crap! Potty Training and I still like reading on it more than any Kindle I’ve tried.

Since its debut in 2007, each generation of the Kindle has added new features, but in many cases, these added extras can’t entice long-time Kindle owners to switch. For Amazon to truly impress us, it had to design a device that comes remarkably close to meeting the company’s goal of creating something that feels like digital paper. The Oasis is seriously impressive — and its $289.99 price may be the only thing that stops those long-time Kindle owners from switching.

The Kindle Oasis, which Amazon shipped last week, was designed for luxury and comfort, and it wasn’t until I started using it that I realized I hadn’t ever really enjoyed holding other e-readers. It all comes down to design: one edge of the Oasis is thicker than the other, so its center of gravity rests in whatever hand is holding it. The result? Reading from this Kindle feels less like holding a screen and more like holding a mini magazine with its pages folded back.

Without the cover, it's incredibly light 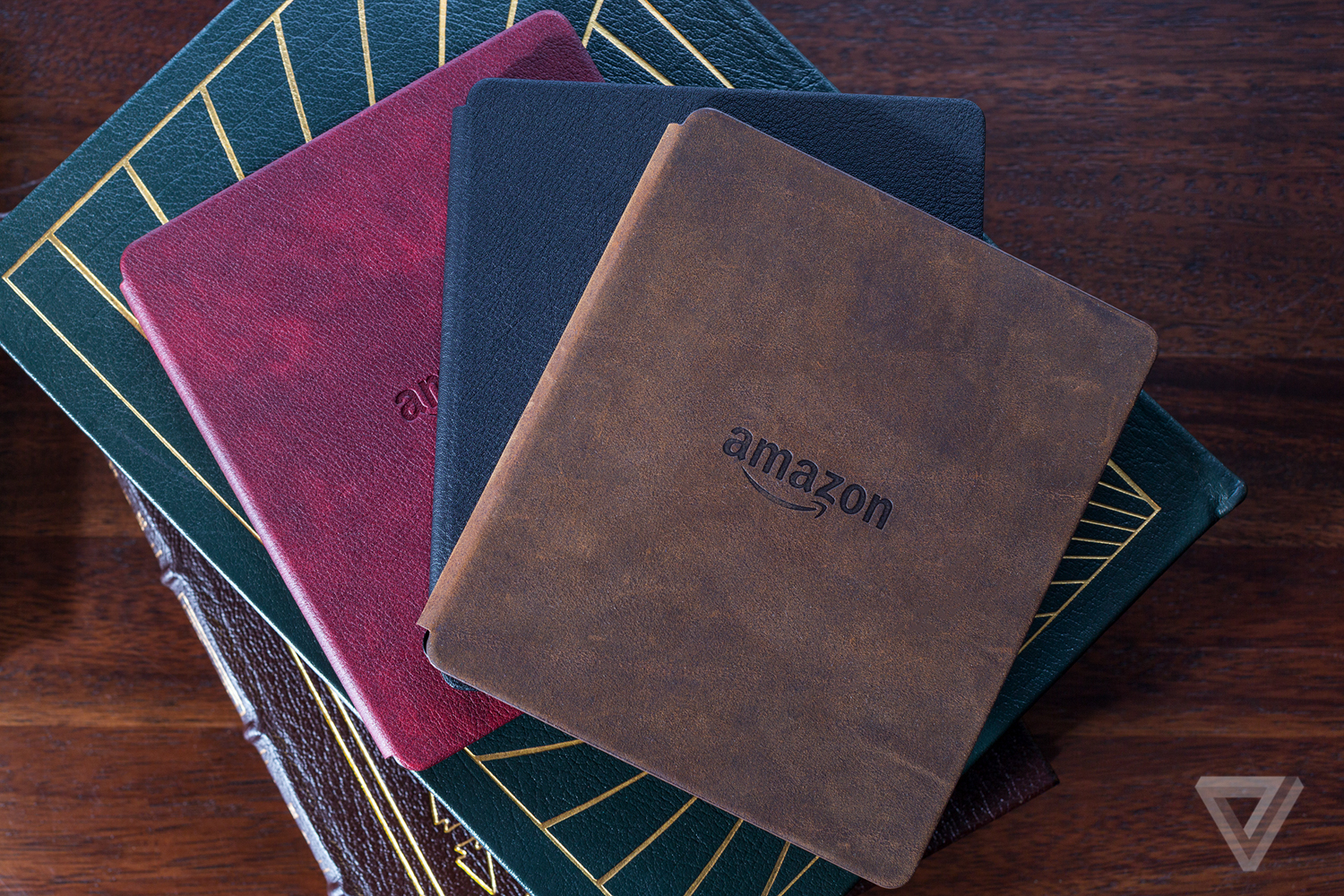 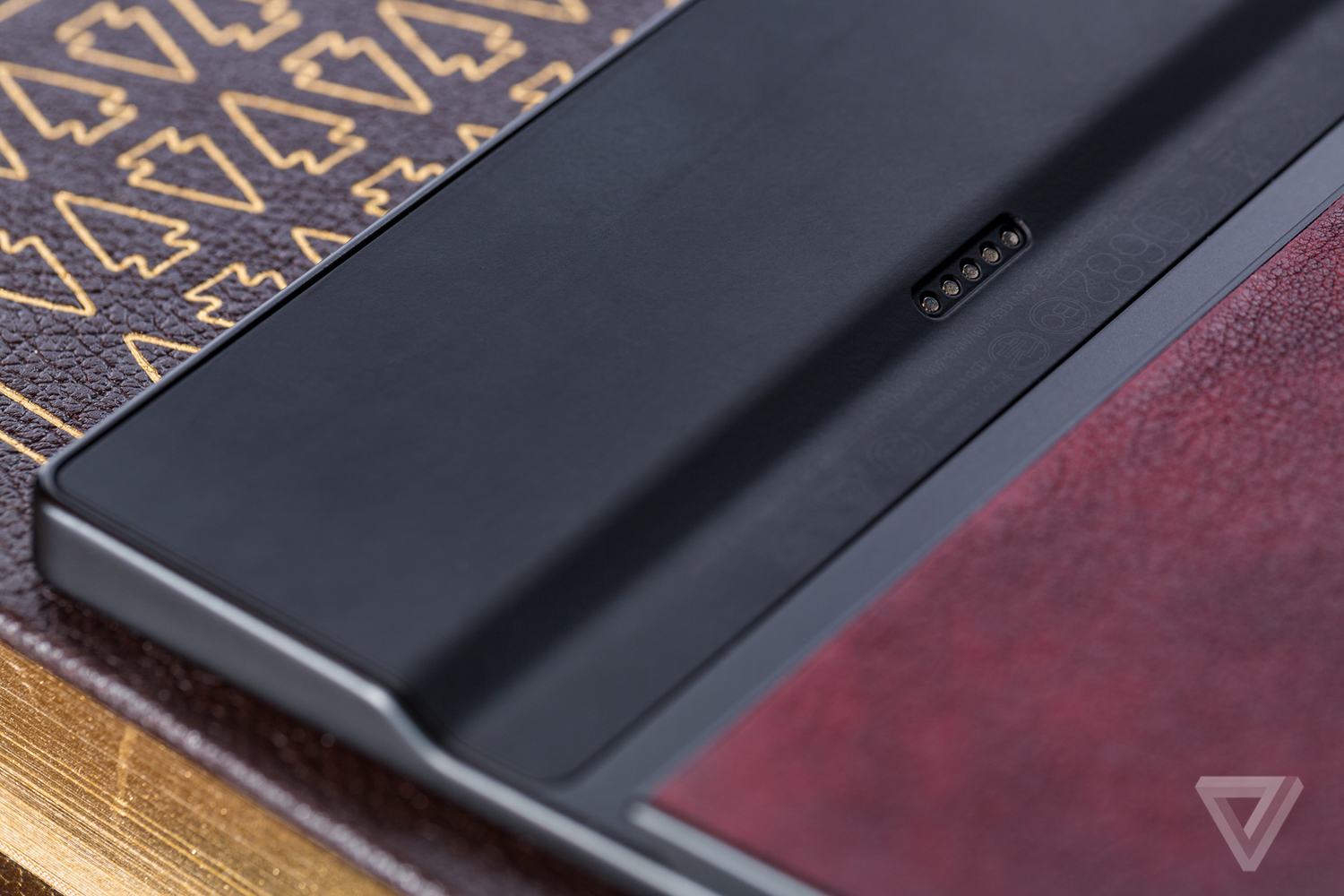 This trick only works if you use the Oasis without its cover — a point that’s particularly ironic since the Oasis ships with a cover. (The only other Kindle to come with a cover was the original Kindle back in 2007.) Even though I promise that you’ll read most comfortably on the Oasis without its cover, Amazon has good reason to include it: the cover jumps your battery life from two weeks without it to nine weeks with it. But there’s an unavoidably frustrating issue with the newest Kindle, even for long-time Kindle people who are enticed to buy: price. For $289.99, you may think you deserve a battery cover, dinner, and a nice bottle of wine with your Oasis. And this is the price for the low-end model with ads on its lock screen and Wi-Fi (not 3G). Compared to Amazon’s previous model, the Kindle Voyage, the Oasis costs nearly $100 more. The most expensive Oasis comes with 3G and no ads on its lock screen, but will set you back $379.99.

I see the Kindle Oasis’ design as a plus, but long-time e-reading fans might need a little while to get used to it. As one of my friends said when he saw the Oasis, "It’s, uh, square." Though the Oasis isn’t an exact square, it definitely leans more square than rectangle. But its 6-inch screen size hasn’t changed. The overall build is 30 percent thinner and 20 percent lighter than the last Kindle — so light (4.6 ounces) that I panicked and thought it had fallen out of my bag at one point. Its thickest edge houses the battery, LED lights, and page-turn buttons, so you can only change pages with one hand at a time instead of using your right and left thumbs to page forward or back from either side of the screen like you can on the Kindle Voyage.

With page-turn buttons on just one side of this Kindle, what happens when you roll from your right side to left side in bed or at the beach and want to switch hands? The Oasis has a built-in accelerometer that flips the screen around so you’re not stuck reading upside down. And the page-turn buttons automatically switch positions, so the top button still pages forward and the bottom button still pages back (or however you want these programmed in Settings). 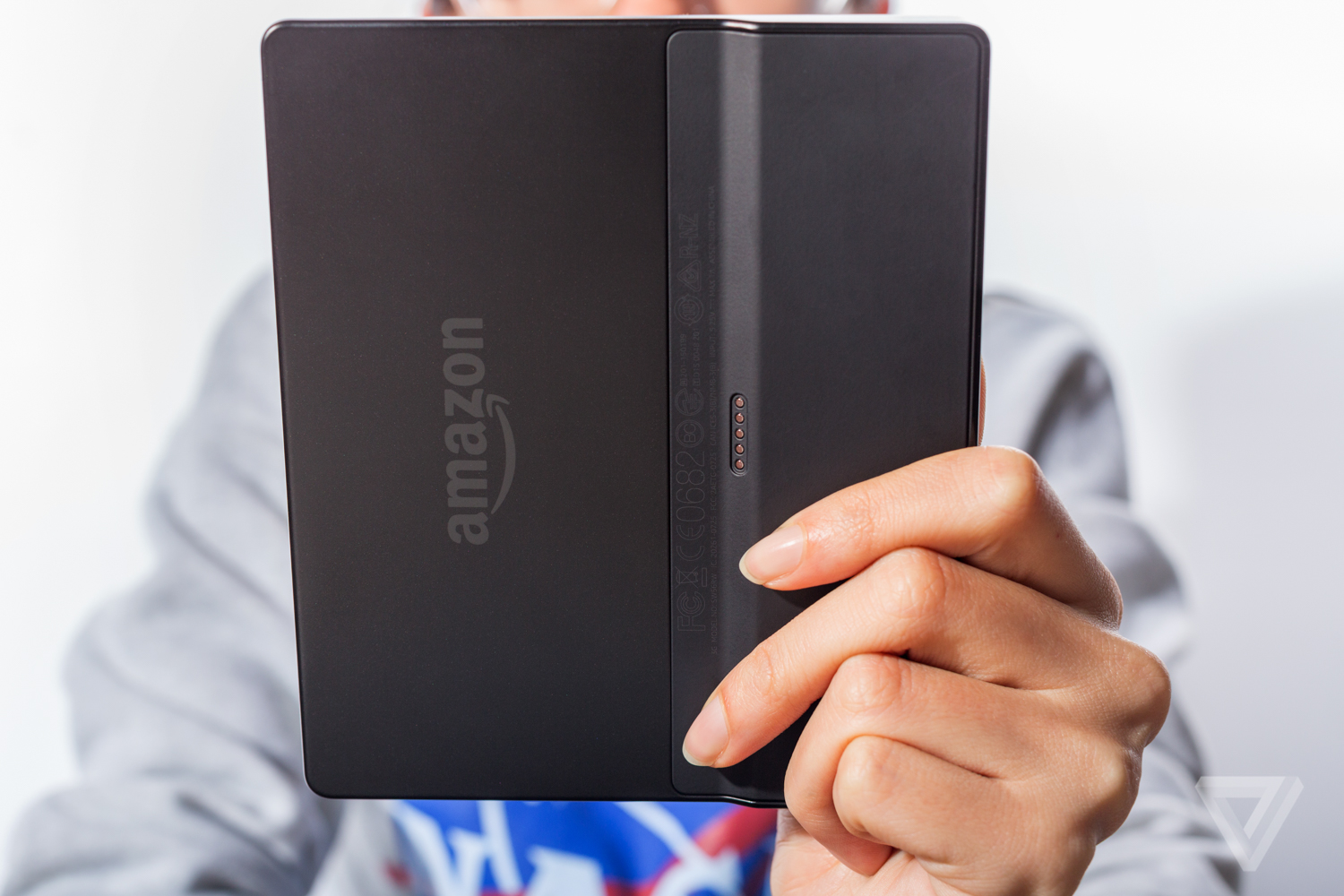 The Oasis has 10 LED lights, compared to six in its predecessor, but they’re always on instead of automatically changing in different environments like the adaptive lights in the Kindle Voyage. Some people might see this as a downside because this kind of light goes back two generations to the Kindle Paperwhite. Who wouldn’t want the newest tech on the newest device? Another ding: the Oasis isn’t waterproof, a feature that beach bums and bathtub lovers have been asking for — especially if they drop $300 on this thing. 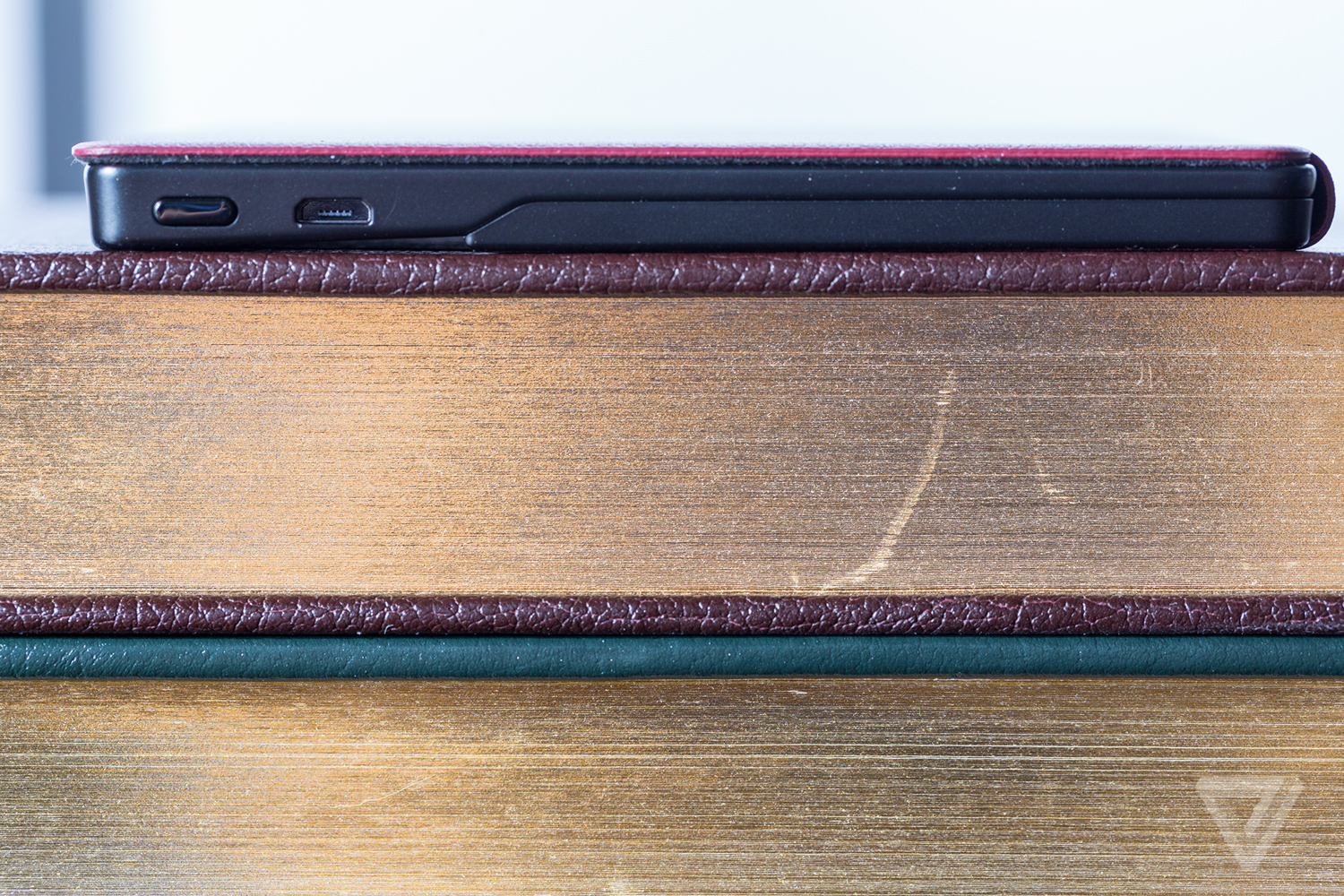 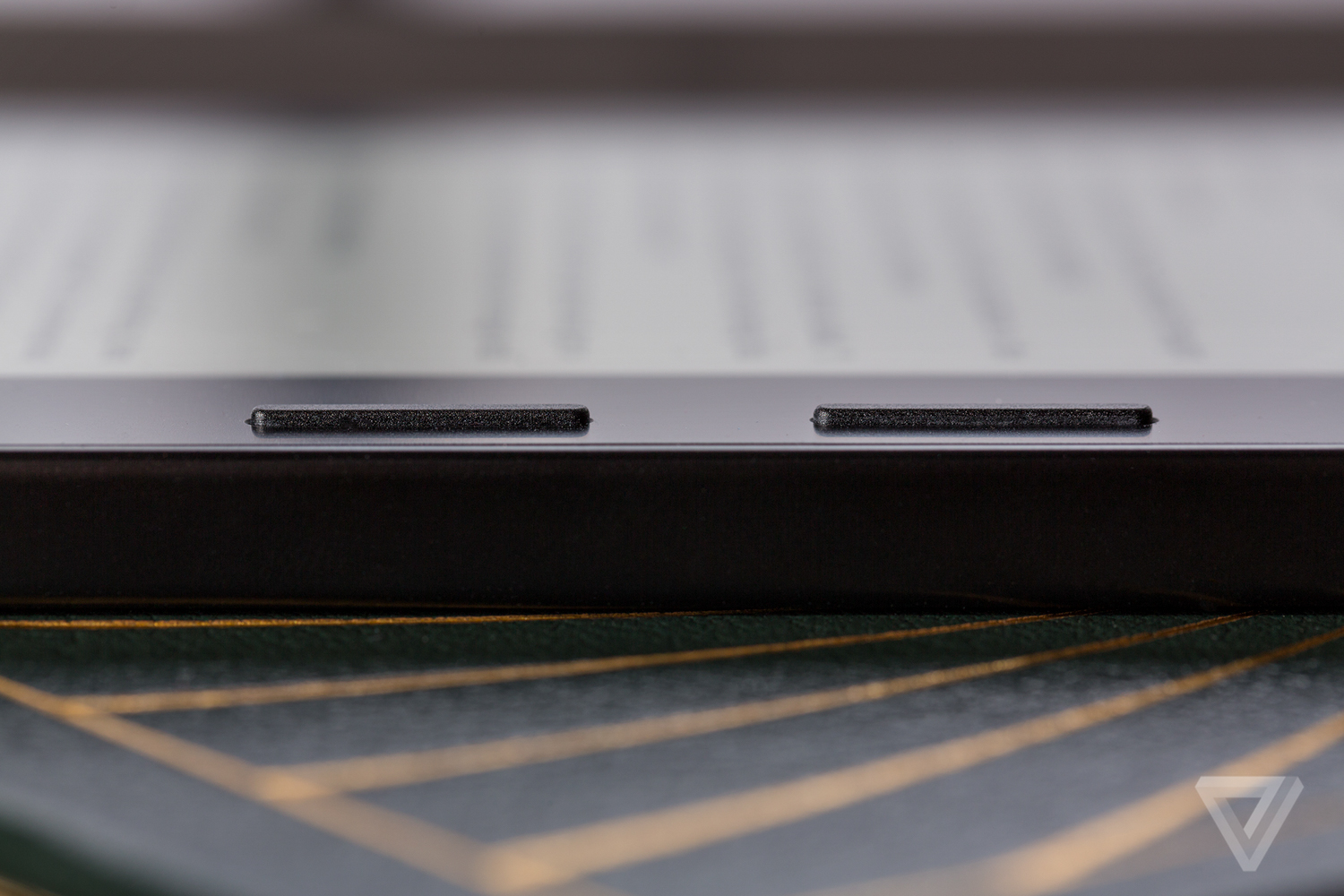 One of the Oasis’ super subtle features is the pattern on its glass screen, which is a cylindrical design rather than the slash design on previous Kindles. In the past, that slash directed light, pushing it toward one side of the slash or the other, while this new cylinder etching is supposed to scatter light better, giving your screen less streaking and more uniform light. The light on the Oasis’ screen looked even to me, and was (as expected) more noticeable in dark situations. But most of the time you won’t notice this — and that’s the way it should be.

It might seem strange to suggest using the Kindle without a cover, since so many people buy covers the second they buy their Kindles. And it might seem especially odd to suggest removing the cover in the case of the Oasis, where you’ll lose about seven weeks of battery life by pulling it off. But the cover comes off with a gentle tug, and I don’t think people will mind frequently taking it off and putting it back on — and this can’t be said for all Kindles, including some that had covers that were a struggle to take on or off. And believe me, the Oasis without the cover is just impossibly light and makes the reading experience so much more comfortable. 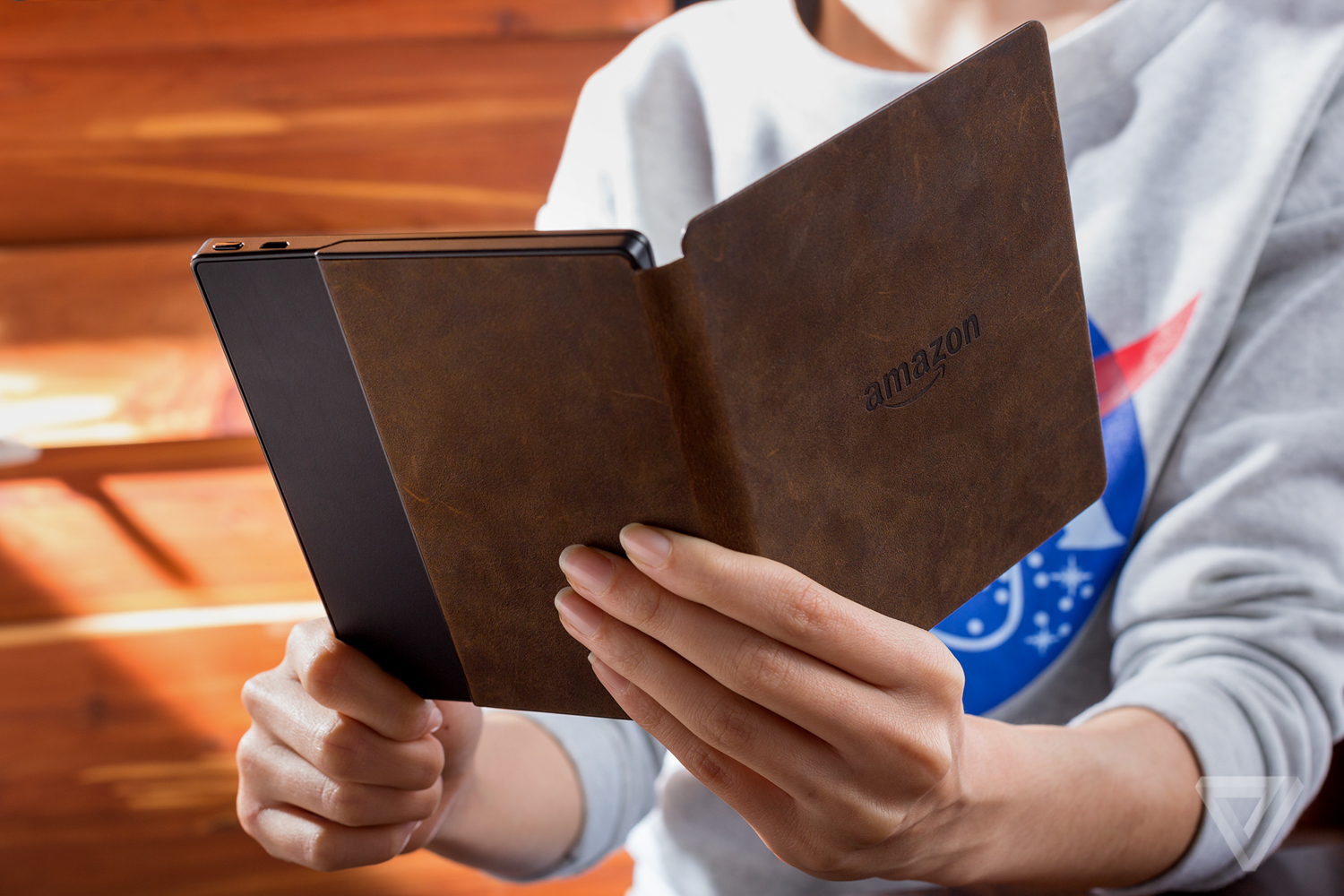 Could the Oasis be seen as yet another Kindle in the long line of Kindles before it? Sure. But at this price, it’s something more: it’s an object of desire instead of a utilitarian reading device. This is the thing that gets you into the Amazon showroom, even if you end up buying the cheaper model (you should almost surely buy the cheaper model). Even so, I know at least a few Kindle users who have been saving up for a device that feels this good — and the Oasis could finally get them to hit Add to Cart.

Correction: the original version of this article stated that this is the first Kindle to feature an accelerometer. However, the Kindle DX had one. We regret the error.