In each Uncharted game there’s one moment that you can point to and say “that might have been the most insane action set piece I’ve ever seen in a game.” In Uncharted 2, series hero Nathan Drake has to climb his way out of a train that’s dangling precariously over a cliff, while Uncharted 3 has him escaping a cargo plane just before it drops out of the sky. In Uncharted 4: A Thief’s End, which launches next week on the PlayStation 4, it’s not an exploding vehicle Nathan needs to get away from: it’s an entire city. He runs across rooftops and through windows, while entire buildings collapse around him.

This one scene is indicative of Uncharted 4 as a whole. Developer Naughty Dog says that the game will be Nathan’s last adventure, and the studio seems to have put all of its effort into making the send off as memorable as possible. Almost every aspect of the game feels bigger and more refined. Uncharted 4 doesn’t change the formula much; it’s still a third-person action game with a bit too much shooting and a whole lot of cutscenes. But the fact that it doesn’t do a lot new isn’t inherently a bad thing — not in this case — because what’s here is so well done, from the gorgeous locations you’ll explore, to the well-acted and powerful cinematic moments to, yes, those unforgettable, superlative action scenes. 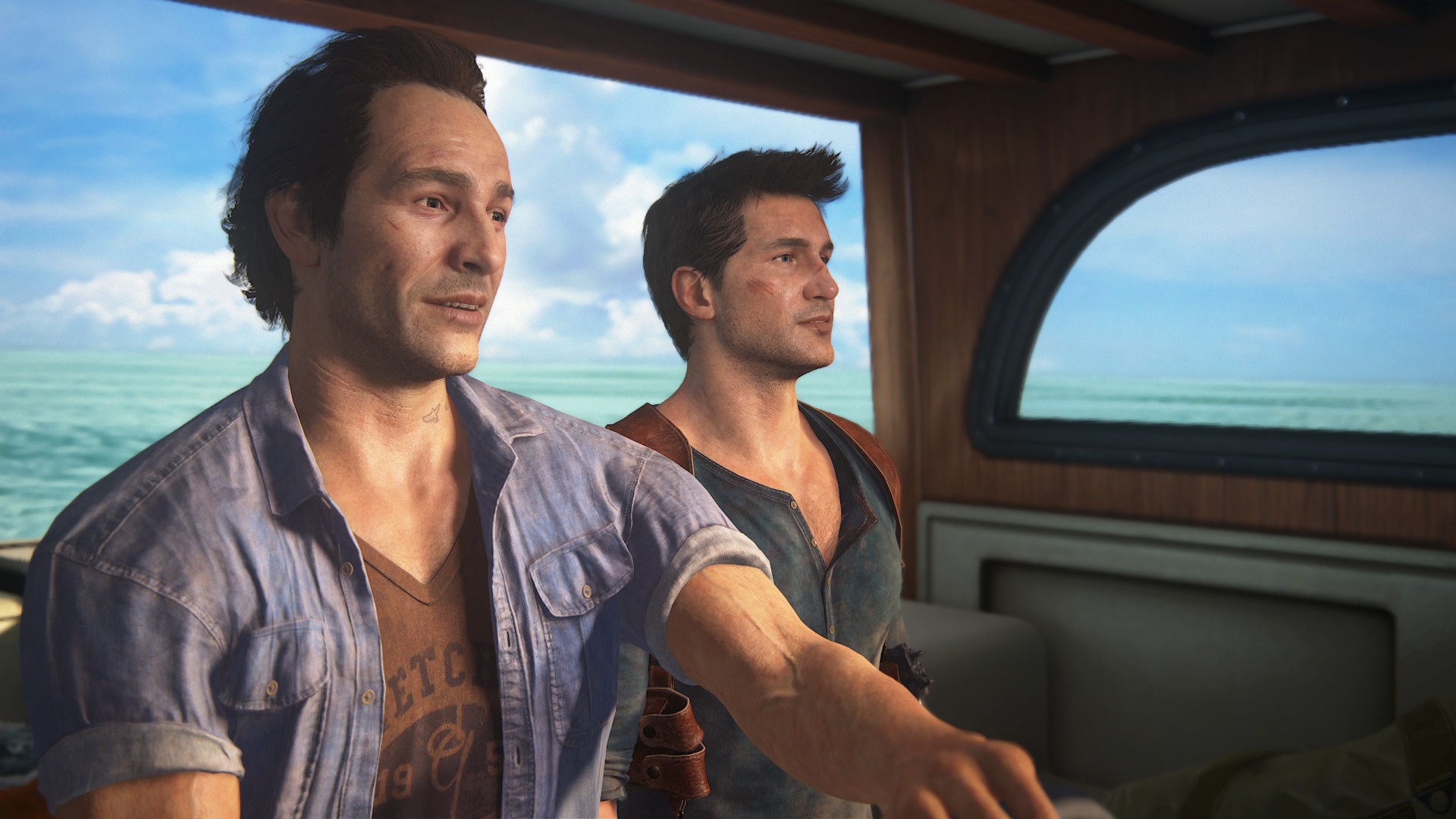 At the outset of Uncharted 4, Nathan is no longer a treasure hunter. After three games’ worth of adventures, he’s settled into a quiet home life. He works as a salvager by day and spends his nights playing video games with his wife Elena (whose life has made a similar turn for the mundane, at least compared to years past). But when alone, Drake is still thinking about adventure, treasure, and all of those things that made his life so thrilling. His attic is filled with mementos from a life of globetrotting, and he keeps files in his work desk of future quests he has no plans to actually embark on. His boss keeps pestering him about a lucrative job in Malaysia, but Nathan turns it down. He’s done with that life.

That is, until, we meet Sam.

In a lot of ways, Sam is the crux of Uncharted 4. He’s Nathan’s brother (there is, surprisingly, a plausible explanation for why he was never seen throughout the first three games) who was believed to be dead, but is now back, and with a big idea. He wants to join forces with Nathan to find the lost, ancient city of Libertalia, a utopia for pirates believed to be hidden somewhere in Madagascar. It’s also rumored to be home to more than $400 million worth of pirate treasure.

You can see the "one last job" plot coming from a mile off. You know that Nathan will join Sam, and that he’ll set off on a continent-spanning journey. That doesn’t make it any less powerful when it happens. Sam’s story, richer than first hinted, tugs at the heart, and you really feel Nathan’s struggle when he makes the choice to leave home.

Uncharted 4’s story is a pretty typical pulp adventure. There are multiple sides racing to find the same treasure; Nathan and Sam are up against a literal army of mercenaries. There’s heartbreak, deception, and death-defying escapes. But through a combination of great writing and acting, as well as much more expressive characters thanks to the game’s enhanced graphics, the story transcends its formula. It’s the kind of tale where someone says a lame line like "the biggest pirate treasure of all time is within our grasp" and you get goosebumps. The downside is that, especially over the first few hours, the story elements are all but overwhelming, and you’ll spend almost as much time watching the game as playing it. Gradually, cut scenes give way to banter, little dialogues that play out over the gameplay.

Nathan is rarely alone in the game, usually joined by Sam and longtime treasure hunting partner Victor "Sully" Sullivan. And they talk — a lot. While you’re driving a 4x4 across a rickety bridge, or climbing a cliff, or venturing through booby-trapped tombs, the conversations become a constant hum in the background. Sometimes it’s just the brothers cracking jokes, other times it’s important character development. Occasionally the banter provides a hint; if you’re stuck for too long on a section, one of your buddies will subtly suggest a course of action. It all feels natural and dynamic. At one point I was driving a Jeep while Sam and Sully reminisced in the backseat. I stopped for a few minutes to investigate a strange-looking well, and when I got back in the car they picked up their conversation right from where they left off. 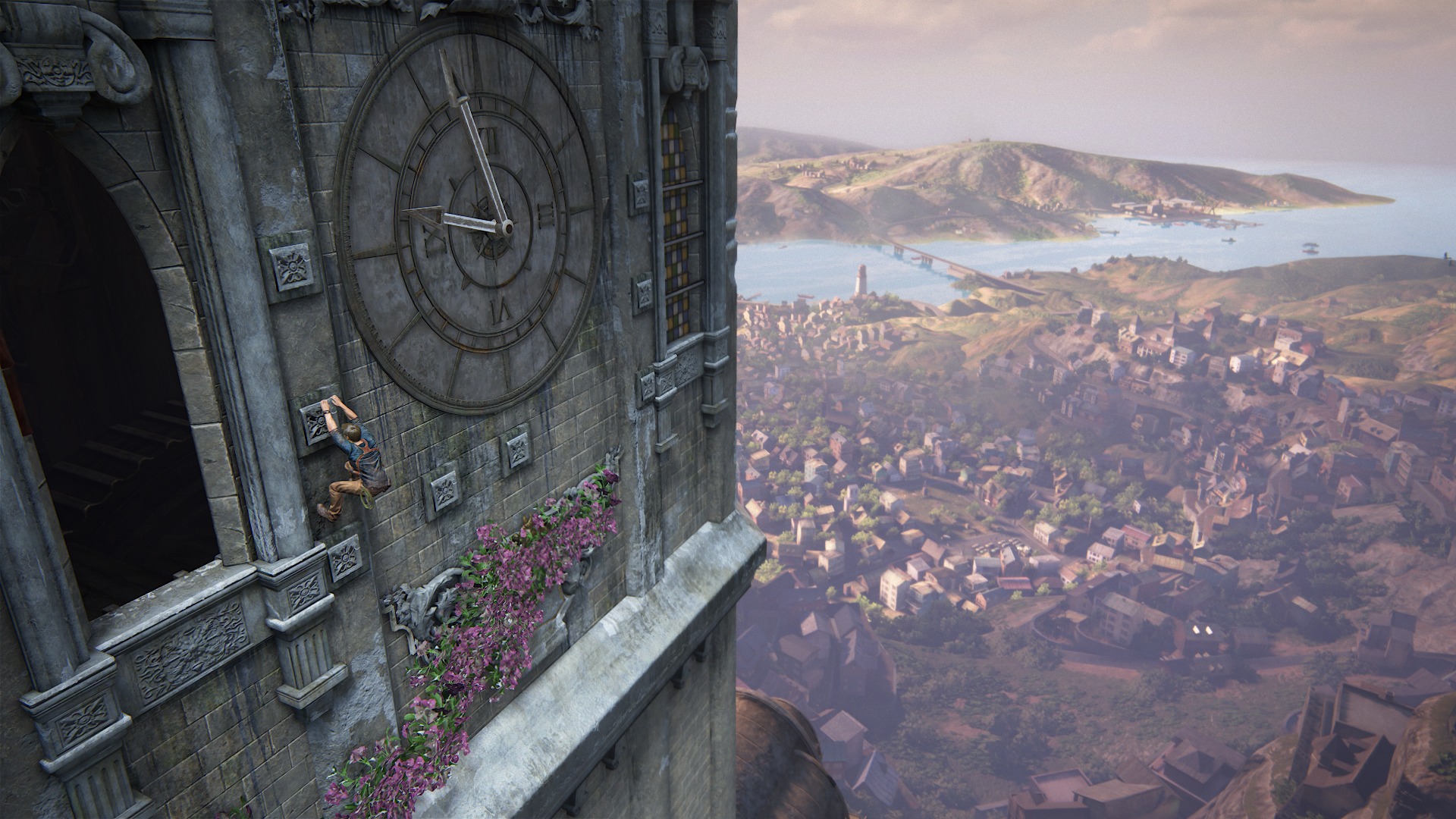 Much has been made of Uncharted 4’s more open nature, but for the most part it plays like a more refined version of Uncharted 3. That means it’s a combination of third-person combat, some light puzzle solving, and exploration — not so subtly guided by the game — that involves a lot of climbing. The climbing, in particular, is a lot better than in previous games, thanks in large part to the new, more realistic animations which make it feel more fluid (Nathan will reach his hand out to let you know he can grab a ledge or make a jump, taking out a lot of guesswork). Whenever the action lags, the game throws in an exploding pirate ship or collapsing bridge, turning a slow jaunt into a race for survival. There’s still no feeling in video games like watching Nathan Drake barely make a jump as the world crumbles beneath him.

While these scenes thunder forward like thrilling and carefully plotted amusement park rides, the combat is less reliably polished. At its best, the game expands upon its straightforward path, and offers choices for how to tackle problems. You’ll be confronted with a cliffside or savannah full of enemies, and multiple ways to suppress them. I found playing Uncharted as a stealth game to be really satisfying. Sneaking up on bad guys and silently taking them out while staying hidden actually feels much more in line with Nathan Drake as a character. He isn’t a soldier, and his knack for constantly killing people with a machine gun with little in the way of remorse has always felt strange. Playing slower, stealthier combat just felt right to me.

The problem is, the game doesn’t always give you that choice. Often you’re forced down a specific pathway where your only option is to gun down bad guys. A lot of bad guys. You’ll know these scenes when you come to them, as they’re filled with strategically placed objects for you to hide behind. These moments break up the flow of the game, and usually feel like a slog, even with some cool new guns to play with. When Uncharted 4 is open, it really feels like you’re playing as Nathan Drake, just barely finding a way to survive impossible odds. When it’s not, the game is just another mediocre cover-based shooter.

Uncharted 4 really doubles down on what it means to be an Uncharted game. It improves the formula in a number of ways, sometimes subtly, as with the climbing animations and incidental dialog. Even with its reliance on typical action movie cliches, the story is more involved and mature than ever before. Uncharted 4 is also a game that benefits greatly from the move to the PS4, with convincing animations and some of the most beautiful locations I’ve ever explored in a video game. If anything, the more believable characters make its core — a game about shooting people — feel like one of Drake’s ancient relics.

If this really is the last Nathan Drake game — Uncharted 4’s conclusion hints that the series could continue with a new lead — then it’s a fitting send-off, reminding you of all the reasons you loved Uncharted.

Read next: The stunning landscapes of Uncharted 4