And a little more oomph

Last year’s introduction of the 12-inch MacBook — that’s just MacBook, not MacBook Air or MacBook Pro — highlighted some of the best elements of Apple design. The laptop is beautiful, super thin, and lightweight, with a Retina display and a new kind of trackpad.

But its sleekness came with a sacrifice: reviewers knocked it for its performance, and deservedly so. It was a laptop meant to push the entire category forward, maybe to the point where “devices” just totally disappear into our lives — but it didn’t have nearly enough oomph.

Now there’s a new, updated MacBook that’s replacing last year’s MacBook. Really there are two things new about it: one of those things is cosmetic, and the other is the opposite of cosmetic. The result is the same laptop design, with better performance. And yet if you’re wondering which Apple laptop offers the best package, it’s not this one. The MacBook is still meant to push the category forward — but this revision shows that it’s doing it in stages, and at a high price.

The MacBook starts at $1,299 for a model with a 1.1 gigahertz dual-core Intel Core m3 processor, 256 gigabytes of flash storage, and eight gigabytes of memory. (A machine with a 1.2gHz Core m5 processor and more flash storage will cost you $1,599.) You can also upgrade even further, and pay more, for a 1.3Ghz chip with a greater turbo boost. Apple has always been able to command a premium, but these starting prices are still expensive by almost all laptop standards.

The first and most obvious change from last year’s MacBook to this year’s is that the new MacBook comes in rose gold. Last year it was available in silver, space gray, or bling-y gold. And the MacBook Air ships in silver. This means the 2016 MacBook is Apple’s only pink laptop. Is this a draw for some people? Maybe. Like last year’s gold MacBook, pink is a differentiator; it screams, "I’ve got the new MacBook!" when you walk into a meeting or coffee shop.

pink screams "I've got the new Macbook!" when you walk in the room

Pink or no pink, it’s a great-looking laptop. It’s difficult to describe just what an aesthetic feat it is without seeing it in person, but that’s my job, so here goes. It really does look like an iPad when you fold it up and hold it with the reflective Apple logo showing. Every person that has seen it or held the new MacBook since I’ve been carrying it with me has remarked on its thinness, lightness, and overall build. 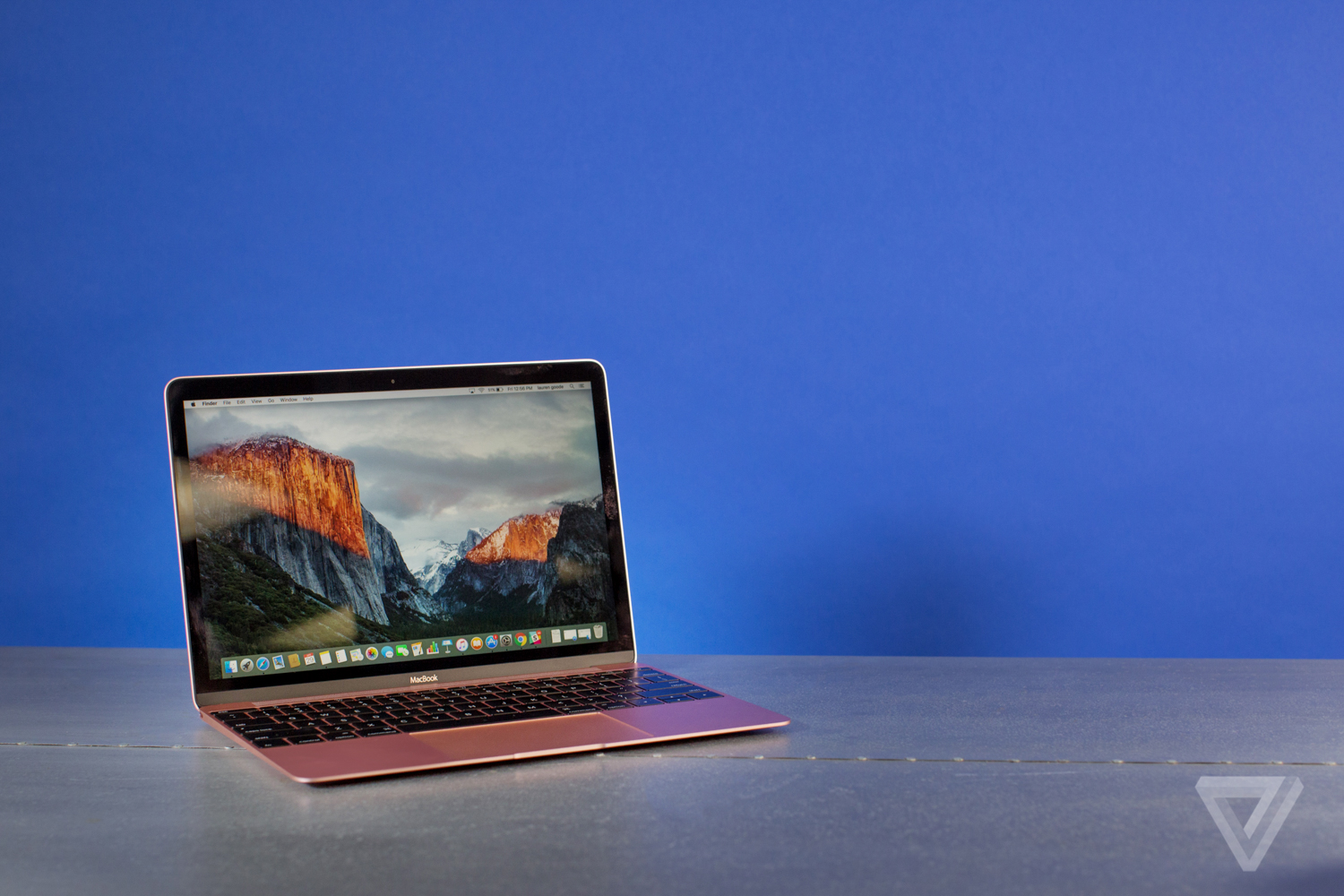 If the future of computing really is one where devices fade into the background and services stand front and center, then this kind of machine helps make a case for that (much more so, in my opinion, than the iPad Pro and its mobile OS). Devices are getting smaller, while also more ubiquitous; speech technology is gradually powering more of our computing interaction; and companies, including Apple, are emphasizing the importance of getting people hooked into their services, not just buying their hardware. For Apple, hardware is still very, very important. But this MacBook is so wonderfully easy to carry around, so nonexistent, that it feels more like another satellite device rather than a command center for all of your personal computing.

Like other Apple laptops, the MacBook is carved out of solid aluminum. It weighs just over two pounds and is 13.1mm thick, thinner than the MacBook Air. It’s not the thinnest laptop on the market — the HP Spectre 13.3 gets that prize — but it’s Apple’s thinnest laptop. It also has a rich-looking, 12-inch Retina display (2304 x 1440 resolution), which the MacBook Air does not have. The display has a 16 x 10 aspect ratio.

the macbook is so thin and light it's almost nonexistent

It’s built with a Force Touch trackpad, which is another mechanical engineering feat: the trackpad doesn’t physically move but it gives the illusion of a click sensation when you tap it. The top section of the trackpad clicks, not just the lower portion. You can do things like forcefully tap on a word in a body of text to see a definition, or use the trackpad to draw or sign a document. It’s not the only reason to upgrade from an older MacBook, but it’s one of those things that, again, fits nicely into Apple’s future-of-laptops narrative. 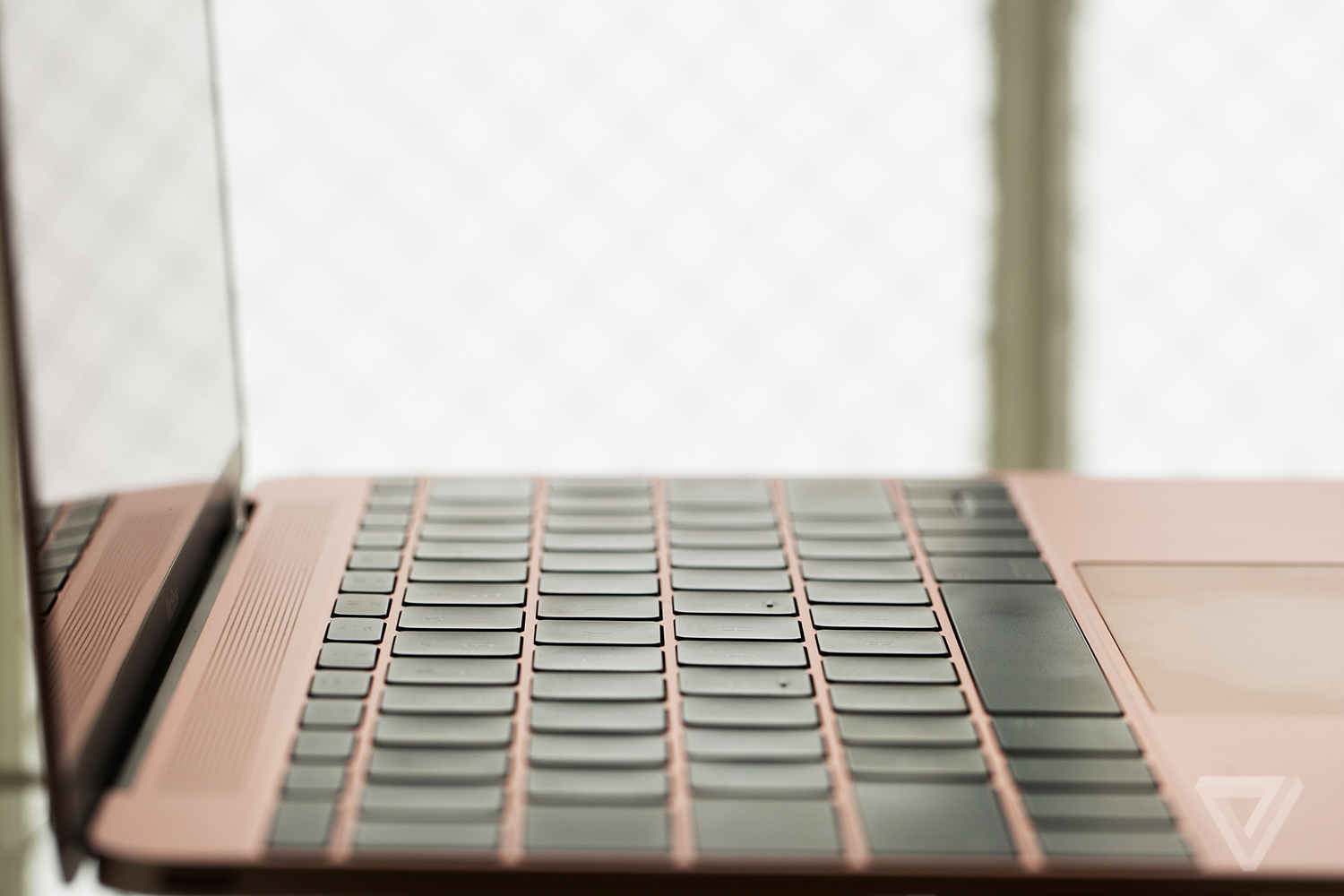 To be sure, there are hardware sacrifices made here, one being the keyboard. It does have a full-sized keyboard, with slightly larger keys than the ones on other MacBooks. But there’s less depth and peripheral space. The keys are shallow; when I went back to my MacBook Pro after using the MacBook, the keys on the older laptop felt pillow-y in comparison. The function keys at the top of the MacBook are tiny. And, this is a small habitual thing, but if you usually grip your open laptop alongside the keyboard to carry it from room to room or meeting to meeting, you’ll find yourself thumbing a bunch of keys on the MacBook, because keyboard goes right up to the edge of the chassis.

If last year’s MacBook had you shaking your head nope, then the one thing that might make you more likely to buy this year’s version is performance. It’s been updated with a new version of Intel’s Core M processor (part of the Skylake generation) and has faster flash memory. The entry-level MacBook has TurboBoost up to 2.2ghz, while the higher-end one offers TB up to 2.7ghz (TurboBoost, for those unfamiliar, is an Intel chip feature that turns up the speed on the processor when it needs it for heavier tasks).

In early benchmark tests, my colleague Dieter Bohn found it to be at least 20 percent faster than last year’s MacBook. While I have less experience with last year’s MacBook, I can say with certainty that the 2016 MacBook handled a volume of browser tabs and heavy apps that would normally cause my late 2012 MacBook Pro to slow down or freeze up. I was actually surprised at how fast it felt. One small informal test? Even the iTunes app opened quickly. And despite the fact that it has no discrete graphics processor, it’s able to handle at least some high-resolution video editing. 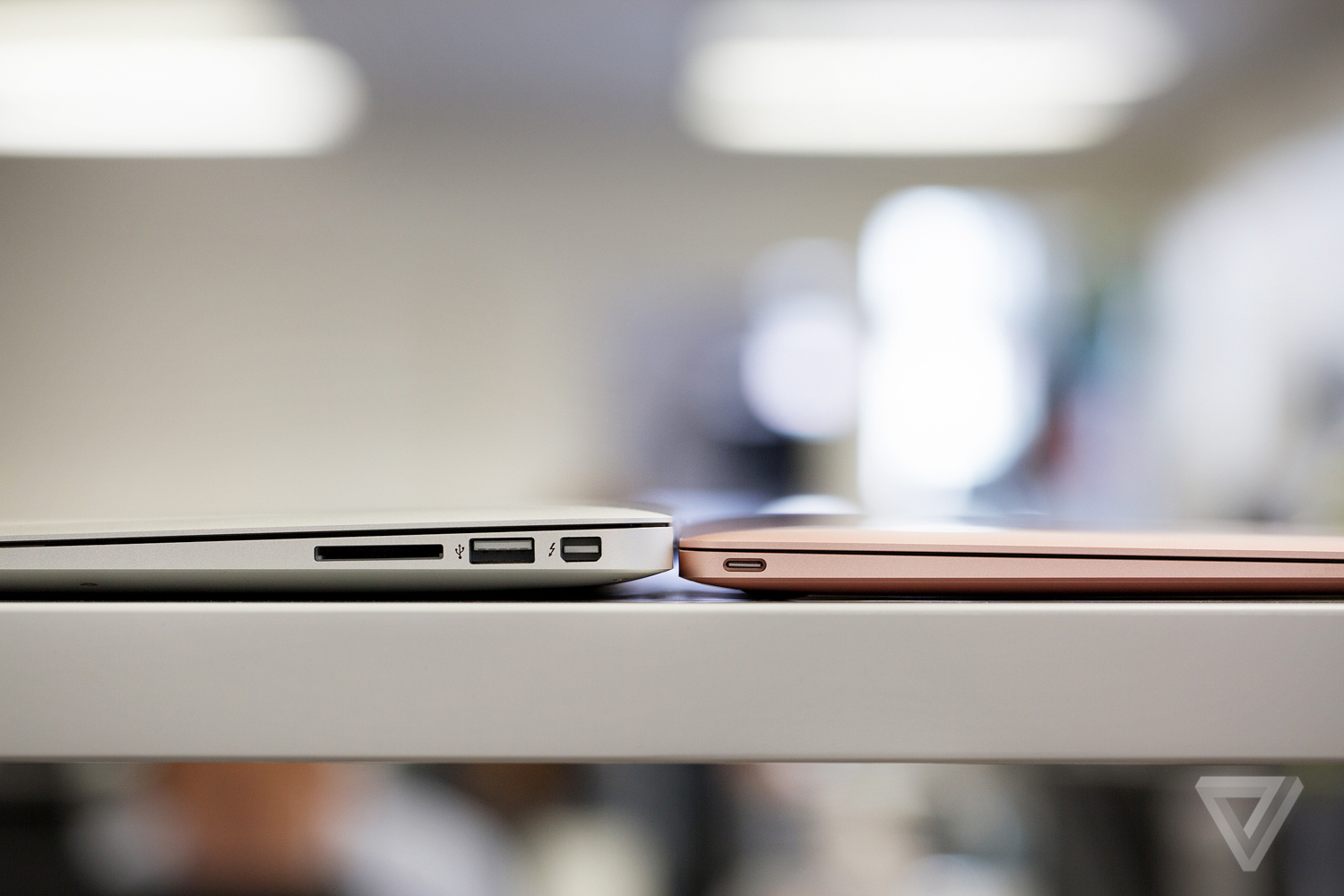 But the thing to remember is that when I say I’m pleasantly surprised by the speed, I’m coming from a place of modest expectations. When you expect more power, you’re going to run into roadblocks. We’re still talking about an Intel Core M. You can buy a more powerful, 13-inch MacBook Air with a 2.2ghz dual-core Intel Core i7 and TurboBoost up to 3.2ghz for $1,149 — less than the starting price of the MacBook. And actual video-editing pros are still more likely to turn to a MacBook Pro, at least for now.

Despite the increase in power, the new MacBook is said to have one more hour of battery life than last year’s MacBook. In an official Verge test, which involves turning off all power-saving settings, setting the display to around 65 percent brightness, and running a loop of web pages, the new MacBook lasted me exactly 10 hours. With normal usage — the screen brightness popped up, having multiple tabs open in power-hungry Chrome, and using apps like Slack — the MacBook would sometimes get me through a work day, but only if I wasn’t using it continuously. If I used it continuously, starting early in the morning, it would need a charge by early afternoon. 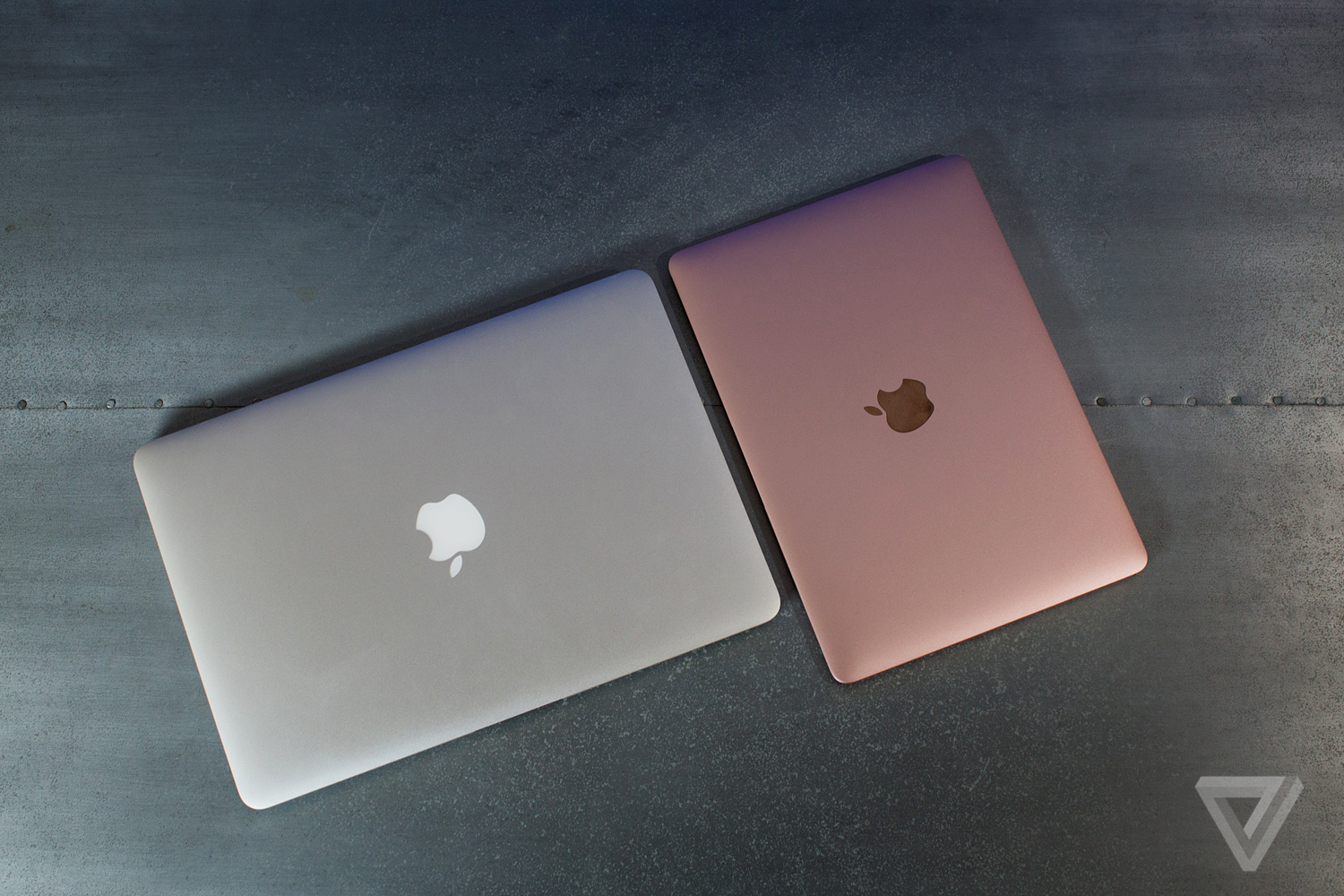 Again, this is all relative: while this is much better than my three-and-a-half-year-old MacBook Pro, it’s still not as impressive as the battery life on a 13-inch MacBook Air.

Then there’s the single, solitary port on the MacBook to consider, a USB Type-C port. As it often goes with the early days of new standards, the conversation is more about convenience than it is about the technology itself. USB Type-C as a technology has proven itself: it offers speedy transfer rates and faster charging. USB Type-C as a single port, though, has proven itself to be a pain in the ass. It requires adapters to do anything beyond just charging the laptop, or just charging your phone from it (not both at the same time!).

It says something about the 12-inch MacBook that it’s powerful enough for editing video and yet simply transferring that video from an SD card is more complicated. It makes an obvious case for using cloud storage, for services in general, but like the move away from floppy disks, or ODDs, change sometimes comes slowly.

For Apple laptop lovers, obsessed with a certain design aesthetic, who are willing to ignore the inconvenience of a single port, and who aren’t put off by the price, the new MacBook won’t be a tough sell. At all. Sometimes when we buy a new consumer product, we buy into the possibilities of the product rather than its capabilities, and this is one of those times. But for most people? I’d wait to see what’s coming down the pipeline.