The option's release follows public complaints in March, when it was revealed that Netflix had been quietly limiting video quality for AT&T and Verizon customers. Its intention was completely reasonable: to "protect consumers from exceeding mobile data caps." The problem was that it failed to tell anyone it was doing this, and it didn't give customers a choice. People with unlimited data plans, for instance, have less of a need to limit their video quality.

Data limits are still on by default

Netflix's new tool, which will be available on iOS and Android today, gives viewers a few different options. They're broken down in a pretty straightforward way: by about how many hours worth of video you can stream per gigabyte of data; it's a simple way to explain the feature and should let people easily figure out what works for them based on their current data limits.

By default, Netflix will still continue to limit video quality over cellular connections — it's up to subscribers to dig trough settings and make the change if they want higher (or lower) quality video. And as always, streams will go back to higher quality once a device gets back on Wi-Fi. 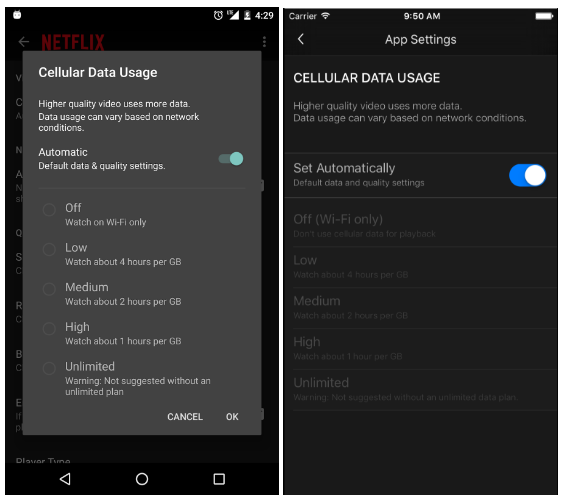 Correction May 5th, 11:54AM ET: Netflix's quality selection feature has been in the works for at least several months and was not developed in response to public complaints, as this article original stated.