“We aren’t making a cyberpunk game,” says Magdalena Tomkowicz, story designer on the upcoming Ruiner. “But we’re making a game that’s influenced by cyberpunk works of fiction and reality.” Despite these semantics, the word cyberpunk is likely the first thing that comes to mind when you see Ruiner.

The world, which you view from a top-down perspective, is full of grimy streets lined with flashing neon signs. The protagonist looks like he’s from a cybernetic motorcycle gang, complete with a mask that conceals his entire face with a customizable screen. Ruiner’s myriad of inspirations include some of the usual suspects — think Ghost in the Shell and Akira — as well as real-world technology anxieties like cryotechnology and the advent of virtual and augmented reality.

“These are the things we like,” says gameplay designer Jakub Styliński, “and the thing that came out was Ruiner.” 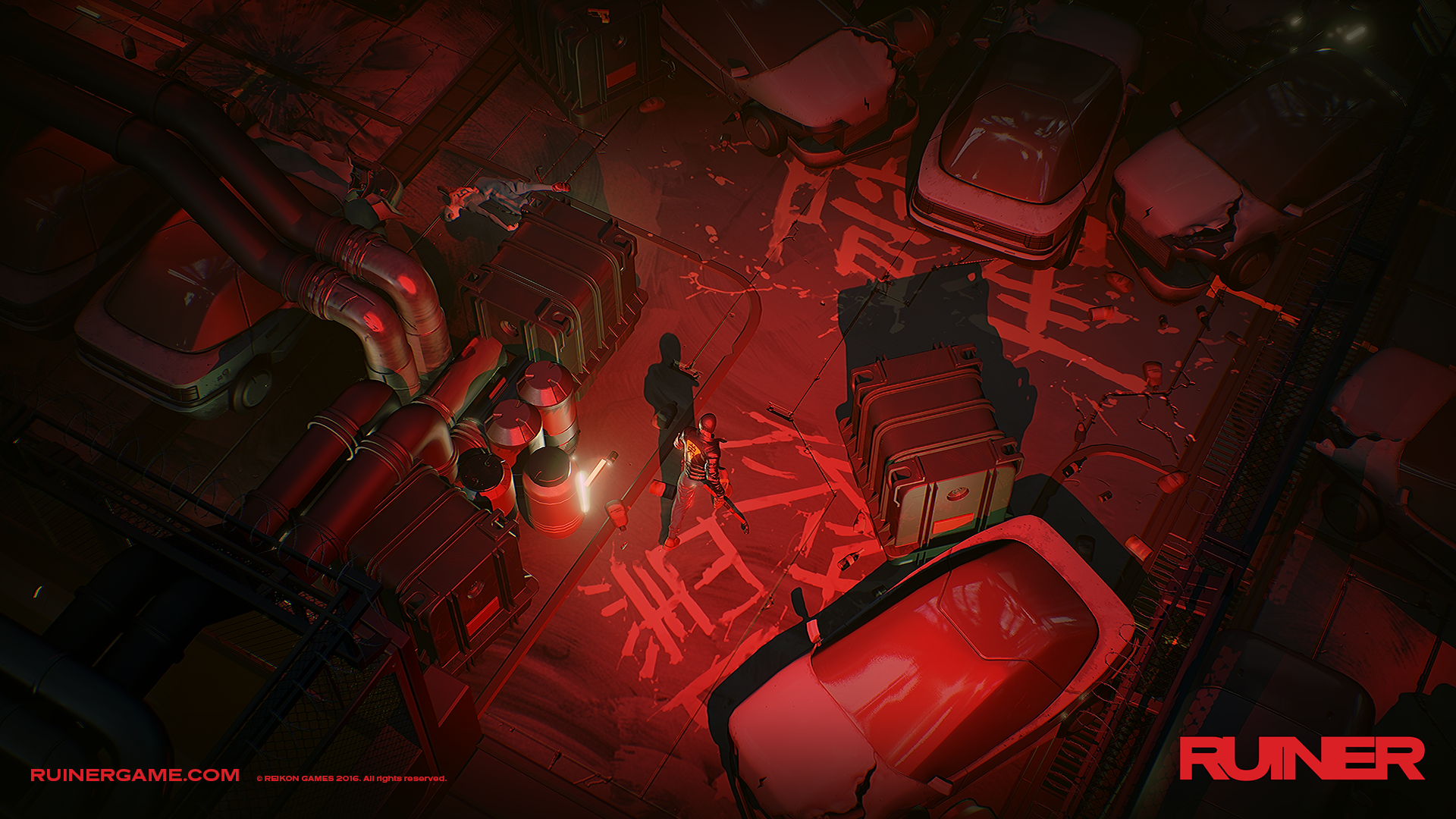 Ruiner is set in 2091, in a city called Rengkok. In this rendition of the future, the lower class of the city are addicted to virtual worlds instead of drugs. You play as a man in search of his brother, guided by a mysterious hacker who serves as the voice in your ear. The game handles sort of like a sci-fi take on the brutal action game Hotline Miami; in fact, that was the original concept. From there it grew. The environments became bigger, shifting away from the closed rooms of its inspiration, and new gadgets and weapons kept being added. The feel of the game really came into place when the developers introduced a dash ability that lets you zip around the levels like a superhero.

Pretty much everyone on Ruiner’s small team has experience working on big games. Styliński and Tomkowicz previously worked at CD Projekt Red and Techland, for instance, where they helped create big-budget games, like The Witcher and Dead Island. They came up with the initial concept for Ruiner in May 2014, and that December they formed the studio, Reikon, in Poland. At the beginning of 2015 they started working on Ruiner full-time and the game is expected to launch on PC later this year. If it looks impressive for an independently developed game, that’s due in part to the team’s background.

"That’s something we learned at CD Projekt Red," says Styliński. "They have this way of, instead of cutting very important stuff, they just work more. It’s kind of crazy, and we always hated that way of approaching working on a game, but now when we started working on our game we did not want to let go." For instance, in order to make the game stand out from the competition, they decided to create detailed, 3D graphics instead of a simpler style that would’ve been faster and cheaper. (It also helped that art director Benedykt Szneider isn’t a fan of pixel art.) "Whenever we have a difficult problem, an ambitious problem, we solve it with an even more ambitious solution," adds Tomkowicz.

Though its influences are clear, in the beginning the team at Reikon was reticent about using the word "cyberpunk" to describe Ruiner. "We didn’t actually want to make a cyberpunk game, and for a long time we wanted to not use the word cyberpunk, to show that this wasn’t a thing where you had to expect rainy streets and neon signs," says Tomkowicz. "For a long time we thought ‘Let’s not use the word cyberpunk. Let’s just make the game and let the people read the themes that are there by themselves.’" Eventually they relented, realizing that the people who would be most interested in the game are probably already into the theme.

The initial concern was that the term would place limitations on the game. Even now, the team has heard feedback about certain elements, after showing Ruiner off at events like PAX. The dashing mechanic, for instance, was deemed more sci-fi than cyberpunk by some. The team’s solution for this is to simply design whatever gameplay features work best, and then figure out how they fit into the universe afterward. In Ruiner’s fiction the dash ability exists because of the character’s augmented legs, for instance, and his ability to heal on the spot is because of helpful swarms of flying nanobots (delivered by drones, of course). 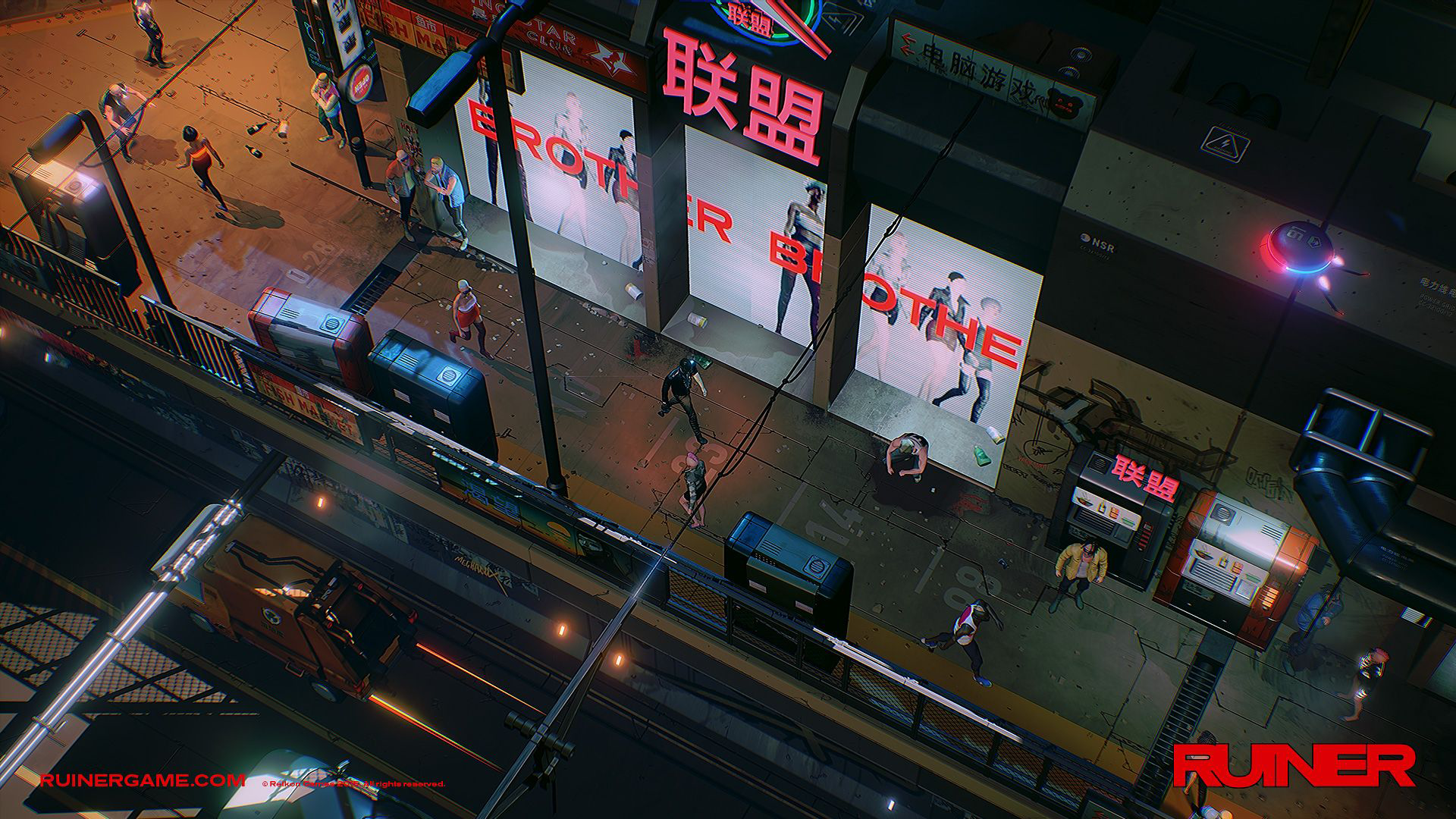 Top-down shooters aren’t exactly known for their narratives — it’s a genre typically focused on arcade-style fast action — but storytelling is a big part of Ruiner. "From the start we wanted the game to be really strong in four dimensions," says Tomkowicz. "Story and gameplay are two of those, the others are graphics and sound." The game won’t have traditional cut-scenes, she says, but instead will relay its narrative through a combination of dialog with other characters, collectible items that provide new information, and the environment around you. Just looking at the city itself can tell you a lot. "We are trying to make the dialog have as little text as possible," she says, "so that the game speaks for itself."

That’s also part of the thinking behind the "tourist" mode that will be included in the final product. While Ruiner will be a challenging game, the developers realize that some people will be frustrated by the gameplay, yet still intrigued by the beautiful dystopia you can explore. "We know that some people despise combat, some people aren’t interested in a game that’s really hard," says Styliński. "So why not let them play the game?" Details of the mode are in flux since it’s still in development, but it will be a substantially easier version of the main game.

For a group used to working within a bigger studio, where the resources are there to support your wild ideas, the indie mentality of Ruiner has been a challenge. "It was very hard in the beginning, at least for me, because when I came up with an idea, like 50 percent of the time I had to scrap it immediately because it wasn’t doable," says Styliński.

At the same time, it’s also been an educational experience, forcing each member of the group to work on aspects of the game that are outside of their typical expertise. "It’s so inspiring," says Tomkowicz. "We learned a lot at CD Projekt and Techland, but compared to those experiences, now we are learning at light speed."